She came. She saw. She conquered.

Rep. Alexandria Ocasio-Cortez dominated the South by Southwest conference with her mere presence, bringing in a larger crowd than any of the 2020 presidential contenders, all of whom were asked about her or her Green New Deal in their own sessions at the popular event.

The 2,000 plus ballroom – one of the biggest in the Austin Convention Center – was packed, the overflow rooms were flooded with attendees and Bill Nye tweeted a photo of himself from the room waiting to hear the freshman Democrat from New York speak. 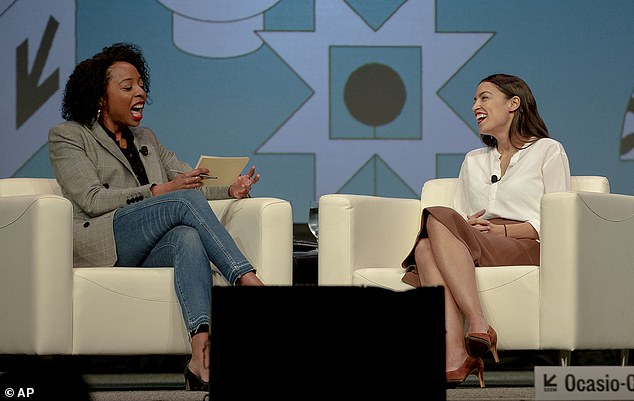 She spent much of her talk decrying the treatment of minorities

The crowd rose to its feet, whooping, cheering and hollering when Ocasio-Cortez entered, but, when she spoke, you could hear a pin drop.

Her one-hour talk was filled with economic policy, social policy and what she’s learned in her two months as a member of Congress.

But her bigger message was one of hope, inclusion and equality, particularly for minorities.

She decried the idea of incrementalism, a belief in change via small steps, and said it took big sweeping ideas to make a difference.

‘This idea of like 10 percent better than garbage shouldn’t be something we settle for,’ she said.

The crowd cheered her on.

Ocasio-Cortez, 29, berated the New Deal, Franklin Roosevelt’s massive public works program worshiped by Democrats, as ‘an exercise in racism,’ arguing it made life and home loans easier for whites but left African Americans and Latinos behind.

She pivoted to her Green New Deal, which she claims would focused on those in need first.

‘We fix the pipes in Flint first. We fix the electrical grid in Puerto Rico first. And we fully fund the pensions of coal miners in West Virginia,’ she said to applause.

She added that Reagan’s description painted a resentful vision of black women who were doing nothing that ‘were sucks on our country.’ 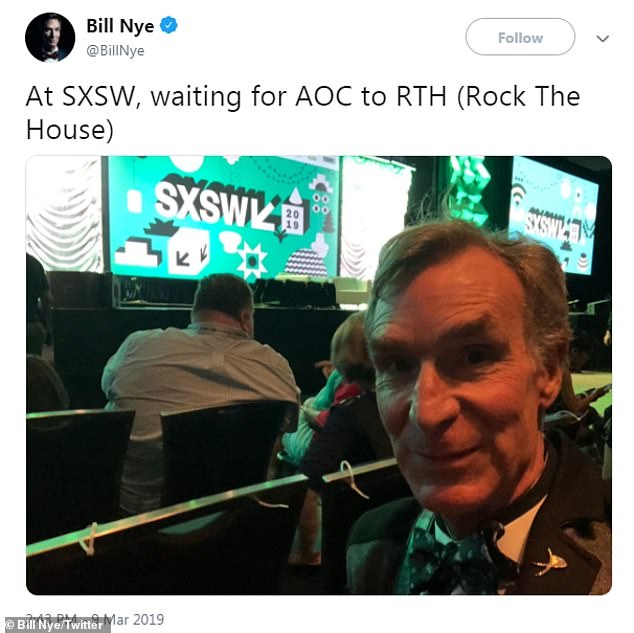 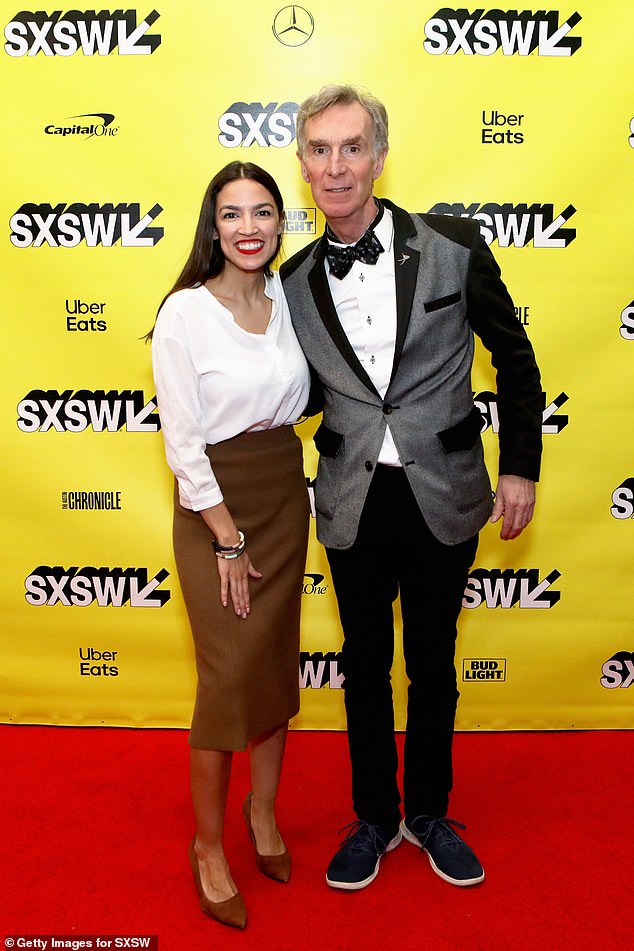 The crowd was delighted when Nye asked Ocasio-Cortez a question

She blasted cynicism and moderatism as too common place in America.

‘We’ve become so cynical that we view ‘um,’ ‘meh’ … we view cynicism as a intellectual superiority,’ she said, adding: ‘Moderate isn’t a stance, it’s an attitude towards life.’

She defended herself as a self-defined socialist, slamming the ‘fear mongering’ of socialism, calling it a fear that ‘governments going to take over the private sector.’

She complained it’s actually the opposite.

‘We should be scared right now because corporations have taken over our government,’ Ocasio-Cortez said.

She also offered the crowd a rallying cry, tied to the Green New Deal she is pushing.

While her talk focused on issues central to her brand, there were light hearted moments.

Attendees were invited toward the end to ask her questions and the crowd roared in delight when one of those was Nye, or “The Science Guy” as he is known.

Ocasio-Cortez was just as delighted to see him.

‘Oh my goodness,’ she said, jumping to her feet and applauding him.

Nye thanked the room and then turned his focus on Ocasio-Cortez asking her about the feeling of ‘fear’ pervading America, which he argued came from white men like himself worried about what they would have to give up.

‘We can give without a take,’ she responded.

The room was filled with a diverse group that reflects the roots of the Democratic Party: young and old, male and female and people of all races.

Curiosity brought them, one attendee told DailyMail.com while some young woman wanted to see a fellow female who had ascended to Capitol Hill.

‘Stop trying to navigate systems of power and start building your own party,’ Ocasio-Cortez told one young woman who asked her how she could get into politics.

‘If I ran my election on a platform that was more moderate I wouldn’t have won my election,’ she said of her 2016 June primary win that shocked the Democratic Party. ‘It has to be different.’

But the majority of her talk was directed the disenfranchised.

‘It doesn’t feel good to live in an unequal society,’ Ocasio-Cortez told the room – another applause line.

There were nods and mummers of agreement.

She blasted corporations for their outsized influence on politics and government.

”It’s not the CEO that’s creating billions of dollars of value a year; it’s workers who are creating it,’ she said.

‘I think that the effort to divide to race and class has always been the tool of powerful to take away the control of the government from the every day working people,’ she told the crowd to great applause.

She slammed capitalism as ‘unsustainable.’

‘We seek and prioritize profit and the accumulation of money above all else … above any human and environmental cost,’ she said. ‘To me that ideology is unsustainable and it cannot be redeemed.’ 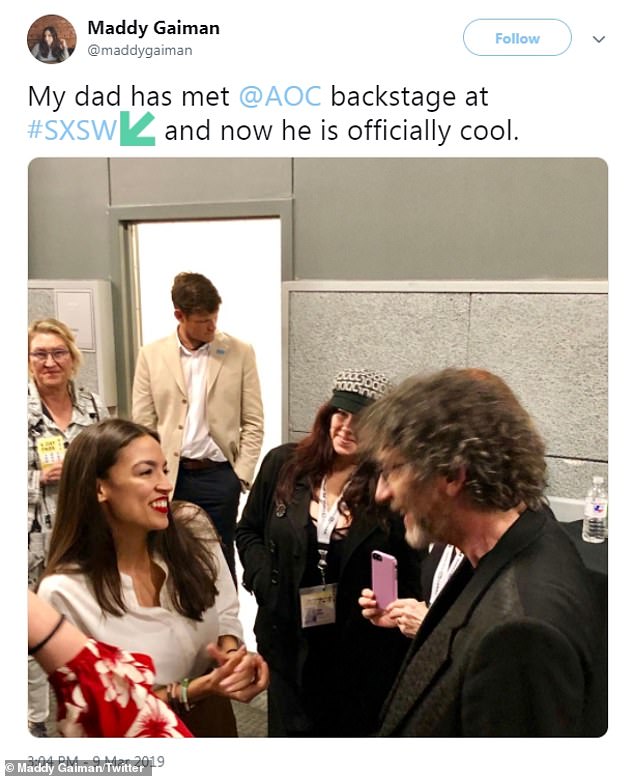 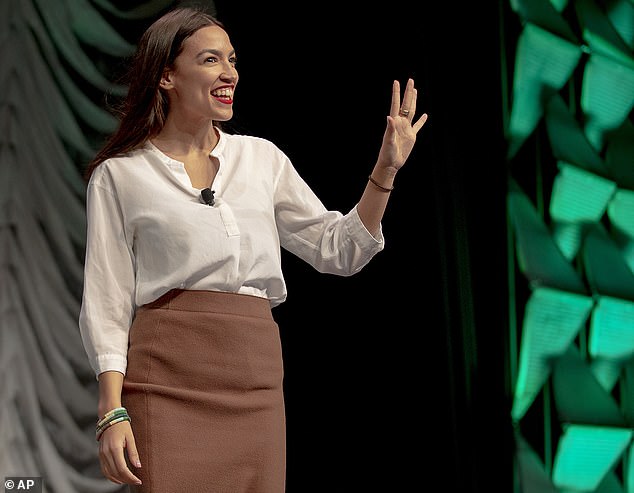 Ocasio-Cortez will be at SXSW for two days

The line to see Ocasio-Cortez snacked around the four floors of the Austin Convention Center.

Earlier in the day, former Starbucks CEO Howard Schultz spoke in the same room with seats to spare.

Author Neil Gaiman spoke in the same room before her and his daughter Maddy tweeted a photo of him meeting the lawmaker after his conversation: ‘My dad has met @AOC backstage at #SXSW and now he is officially cool.’

But all were asked about Ocasio-Cortez or the Green New Deal she is pushing.

Schultz slammed it as ‘never gonna happen’ while Klobuchar praised it. And Warren was asked if the youngest member of Congress was under-hyped or overhyped?

Ocasio-Cortez was asked about the upcoming presidential but didn’t endorse a contender.

‘What is the story that they tell I think is really important to ask and look for in people,’ she said.

And when asked how Democrats could pick a nominee who can defeat President Trump, she replied: ‘I think the person we believe in is the person who will win.’