1 in 3 US veterans suffers depression and 25% binge-drink, survey finds

The tormenting mental health condition affects one in four unemployed veterans and one in three who do work.

The rate is strikingly high among those with a disability: nearly 70 percent of them are depressed.

What’s more, 25 percent of veterans with depression say they binge-drink.

Dr Lawrence Weinstein, chief medical officer of the American Addiction Centers, which produced the survey, said the figures show clear areas for policymakers, physicians and families to work on as the suicide rate among vets continues its decade-long rise.

More than 25 percent of veterans who suffer from depression report binge drinking. Hawaii had the most amount of veteran binge-drinkers at 21.5 percent and Utah had the lowest at 9.1 percent

The BRFSS collects data on US residents’ risk behaviors, chronic health conditions, and use of preventive services.

Although depression can be hereditary, it can also be a result of experiencing emotional and physical trauma, as many veterans do.

While mental health issues are a concern among all service members, they are most prevalent among unemployed vets and those who are unable to work.

More than two-thirds of veterans who are unable to work due to disabilities and more than one in four who are unemployed suffer from depression.

There are more than 23 million veterans across the US, but several studies show that only half of former service members who need treatment for mental health or substance abuse issues seek care.

Dr Weinstein, a psychiatric/addiction specialist whose patients include veterans, spoke to Daily Mail Online about how depression goes undetected among former service members and why early intervention is key to recovery.

‘Among the general population in the US, 60 million adult Americans have major depression, which is around seven percent of the population,’ he said.

Dr Weinstein says there are a couple of steps that medical professionals can take before the depression worsens.

‘You need to early identify those who are at risk and engage them in treatment because the longer that one stays in treatment, the better they get,’ he said.

Mental health disorders and depression are not uncommon among veterans but, if they’re not enrolled in treatment, they can turn to substance such as alcohol as a coping mechanism.

Between 2013 and 2017, the survey found the number of veterans diagnosed with binge drinking episodes has increased from 14.3 percent to nearly 16 percent.

Even more saddening, more than 25 percent of veterans who suffer from depression report binge drinking.

The survey looked at the binge-drinking patterns of veterans in all 50 states and found that Hawaii had the most amount of veteran binge-drinkers at 21.5 percent.

Hawaii was closely followed by Nevada at 20.5 percent, and Wisconsin at 20.1 percent.

The biggest factor that leads to veterans with substance and alcohol abuse problems appears to be post-traumatic stress disorder (PTSD). 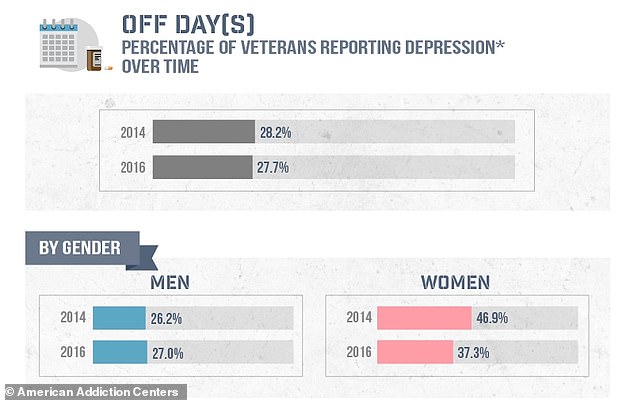 Around seven percent of the US general population is depressed but, among the veteran population, this increases to nearly 28 percent

PTSD is caused by overactive fear memory and includes a broad range of psychological symptoms that can develop after someone goes through a traumatic event.

According to the US Department of Veteran Affairs, former service members who suffer from PTSD are more likely to have drinking problems.

About one in three veterans being treated for substance use disorders also has PTSD.

However, several studies have shown that consuming alcohol can worsen can exacerbate a veteran’s PTSD.

Because alcohol is a depressant, it can worsen symptoms including depression anxiety and insomnia.

‘It’s a vicious cycle [veterans] cannot get out of and the consequence of it is they now require help for substance use disorders on top of PTSD,’ Dr Weinstein said.

The survey found that Utah was the state with the lowest occurrence of veteran binge drinking at 9.1 percent.

However, a report released earlier this month by the US Department of Housing and Urban Development found that although there are fewer homeless vets nationwide, the number in Utah has increased.

Experts worry that the increase of former service members on the streets could lead to a large percentage of them developing substance use disorders. 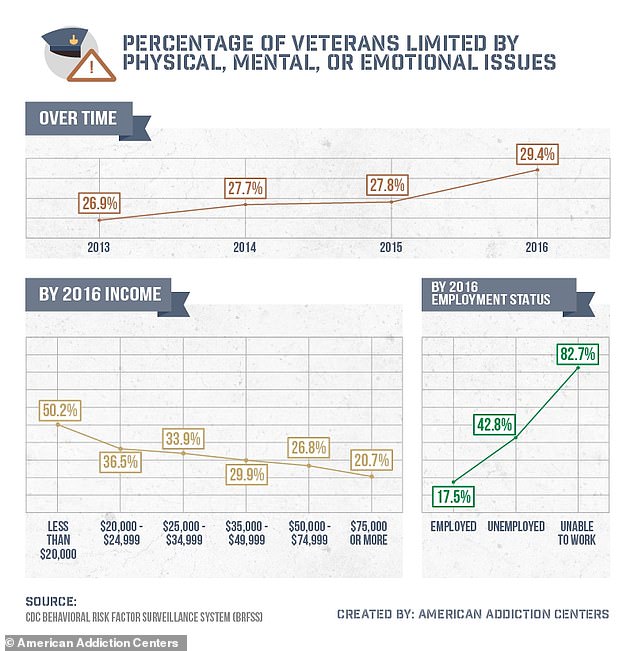 ‘It will increase in states that have large homeless populations,’ said Dr Weinstein.

‘But it’s not just the sheer number of veterans living in the state but what kind of local policies are in place to help them.’

So what can be done to get our veterans the help they need? A few things, according to Dr Weinstein.

‘Mental illness is a horribly under-diagnosed and under-reported condition and it’s even higher among veterans than the general population,’ he said.

‘So we need to identify veterans with a severe mental illness and place them in specialized treatment programs because they don’t just suffer from PTSD or depression, but also COPD, hypertension and so on.’

Dr Weinstein adds that there also need to be education among a variety of people.

‘We need to devote time to education: how to educate our veterans on possibility of developing PTSD when they return from service in abroad, educate commanding officers that will alert superiors to what are early signs of mental illness among soldiers.’