A 26-year-old man is in a coma after vaping THC, the psychoactive component of marijuana.

The patient, of Burlington, Wisconsin, was hospitalized this week, coughing and struggling to breathe, his brother, Patrick DeGrave, said.

It comes just weeks after eight Wisconsin teens were hospitalized with severe lung damage in the capital of Milwaukee after inhaling the drug via an e-cigarette.

There was no common product connecting all nine of the cases.

‘Given the severity of the illness reported and that fact that it’s affecting children, this is a top priority,’ Jonathan Meiman, chief medical officer with the Wisconsin Department of Health Services, said, USA Today reports.

The patient, of Burlington, Wisconsin, was hospitalized this week, coughing and struggling to breathe, his brother, Patrick DeGrave (pictured next to his brother’s bed), said 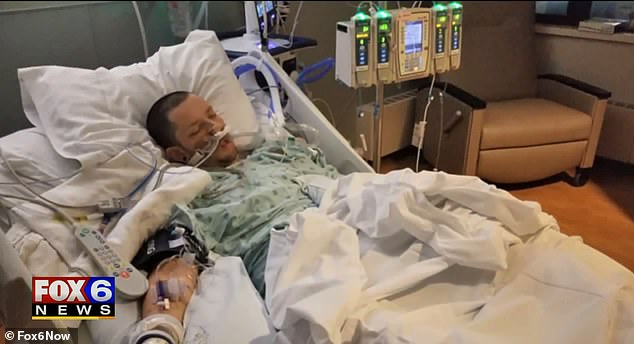 It is not clear why the patients suffered such severe reactions.

E-cigarettes have exploded onto the US market in the last could of years, drawing ire from doctors and health officials.

But concerns have largely been over vapes that contain addictive and damaging nicotine, presented without evidence as ‘healthier’ than tobacco products. Indeed, this week, Congress held a two-day hearing to interrogate market leader Juul, which has poured thousands of dollars into marketing to teens.

While e-cigarette injuries are not unheard of – both from devices exploding in pockets, and reactions to the vapor – they have, until recently, been seen as isolated incidents.

The spate of hospitalizations in Wisconsin, however, has triggered concern.

And it points to a growing problem: in the first six months of this year alone, Poison Control received 2,091 reports of poisoning from vapes – inching close to the 2,470 total reported in the 12 months of 2017. 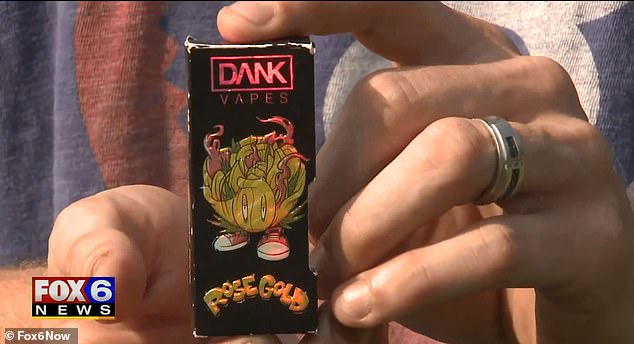 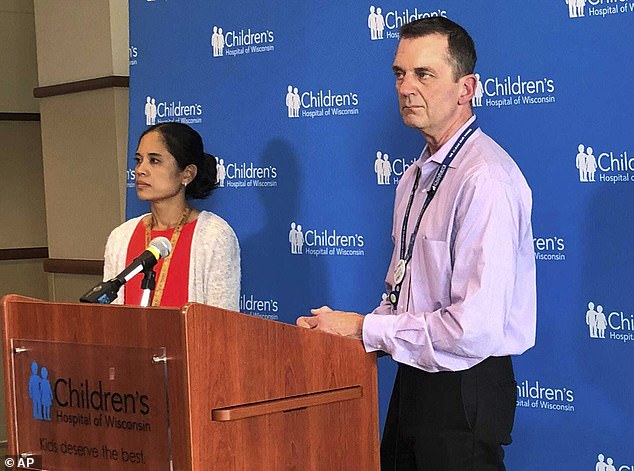 ‘We don’t have lot of information about the long-term effects and sometimes even the short-term effects,’ said Dr. Michael Gutzeit, chief medical officer, told Fox.

When he started spluttering earlier this week, doctors thought it was pneumonia.

Within 24 hours, he was placed in a medically-induced coma.

‘It’s wait and see. We’re uncertain right now if he’ll ever fully recover from this.’

Of the eight teens, one remains hospitalized; the other seven responded to steroid treatment.