10 of the best Champions League goals

The Wales star scored twice as a substitute in Real Madrid’s 3-1 win Kiev, the first coming barely two minutes after coming on as he met Marcelo’s cross with a stunning bicycle kick to find the top corner.

It surpassed even his 60-yard solo run for Tottenham against Inter Milan seven years ago and here, Press Association Sport highlights some of the other great goals in the competition.

After exchanging passes with Sergio Busquets, Messi showed his sublime skills during the 2-0 semi-final first leg win at Barca’s bitter rivals Real Madrid. The Argentinian accelerated away from Lassana Diarra, evaded both Sergio Ramos and Raul Albiol and then beat Marcelo before coolly sliding the ball past Real goalkeeper Iker Casillas.

Four years after leading France to World Cup glory, the current Real coach won his first and only Champions League title as a player after a superb winner at Hampden Park. Roberto Carlos hooked in a looping cross from the left and Zidane, just inside the penalty area, calmly waited for the ball to drop before rifling a first-time left-footed volley into the roof of Hans-Jorg Butt’s net.

The 20-year-old substitute had been on the pitch for just 16 seconds when he sealed a 3-1 success for Ottmar Hitzfeld’s Dortmund in the 1997 final against Juventus. Ricken, on for Swiss striker Stephane Chapuisat, raced from halfway to latch on to Andreas Moller’s through-ball and then lifted a fine first-time strike over stranded keeper Angelo Peruzzi.

The Italian midfielder’s overhead strike from 30 yards against Barcelona rivalled even Bale’s latest effort. With the ball bouncing having only been partially cleared by the Barca defence, Bressan launched himself into the air and connected perfectly. His speculative attempt flew goalwards before bouncing down off the underside of the crossbar, leaving goalkeeper Francesc Arnau slumped in the side netting.

Juve lost the 2017 final 4-1 to Real but scored undoubtedly the best goal of the night in Cardiff. Leonardo Bonucci’s searching pass, the ball did not touch the ground as Alex Sandro volleyed first-time across goal, Gonzalo Higuain cushioned the delivery and Mandzukic controlled with his chest before hooking an overhead volley into the top right corner.

Ronaldo produced a stunning long-range strike against Porto to put United into the 2009 semi-finals. Sir Alex Ferguson’s men needed a result in the Estadio do Dragao having conceded two away goals in drawing the home leg 2-2, and Ronaldo made the difference. Inside six minutes, he collected the ball from Anderson, turned and then unleashed an unstoppable drive into the top left corner from around 40 yards.

Brondby, drawn in a group of death with Barcelona and eventual finalists Manchester United and Bayern Munich, enjoyed a memorable 2-1 victory over the Germans courtesy of midfielder Ravn’s 89th-minute solo effort. He lifted the ball over Bayern defender Thomas Helmer midway inside the visitors’ half and then, with Markus Babbel approaching, struck a dipping half-volley from 25 yards which flew over Oliver Kahn and in off the left post.

Germany goalkeeper Manuel Neuer’s sweeper-keeper role came undone in sensational style thanks to Stankovic’s outrageous volley from inside the centre circle. Neuer, then playing for Schalke, came racing out of his goal to clear the ball from the edge of the D with an impressive diving header. Unfortunately for him, it sailed straight to Serbia midfielder Stankovic and his technique was flawless as he rifled the ball into the unguarded net without a bounce. 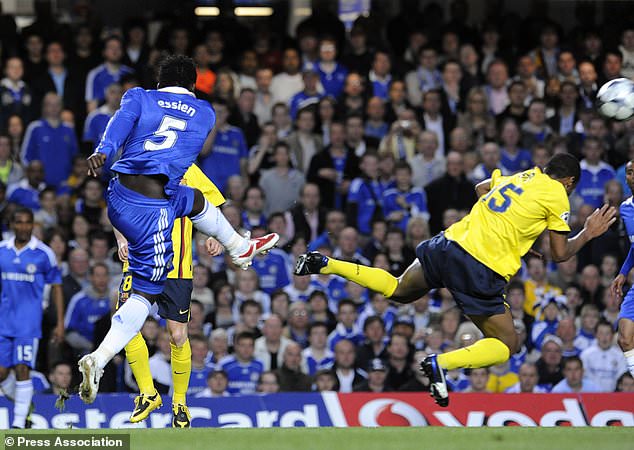 Although Andres Iniesta ultimately ended Chelsea’s hopes of making the final in heartbreaking fashion with a stoppage-time away goal, Essien’s thunderous strike will live long in the memory. Frank Lampard’s attempted cross was blocked by Yaya Toure, sending the ball looping into the air. It dropped perfectly for Ghana midfielder Essien, who stepped forward and let fly with a left-footed volley which crashed down off the crossbar and bounced into the roof of the net.

Bale’s stunner in Kiev had precedent, with Ronaldo producing an almost identical moment of magic in the quarter-final. The Portugal forward acrobatically connected with Dani Carvajal’s cross to fire the ball past Juve goalkeeper Gianluigi Buffon from around the penalty spot and help Real to a 3-0 first leg and 4-3 aggregate win.