An artificial diamond is set to light up the night sky as part of a new art project.

Orbital Reflector is a ‘space sculpture’ constructed of a lightweight material similar to Mylar.

It is scheduled to launch on a SpaceX rocket in 2018, and its creators says once it inflates 350 miles above Earth, it will be visible with the naked eye.

HOW IT WILL WORK

Orbital Reflector is packed inside of a small (3U) satellite called a CubeSat that will be launched into space aboard a SpaceX Falcon 9 rocket in early 2018.

Once in low Earth orbit, at approximately 350 miles (575 km) from Earth’s surface, a 100-foot-long diamond-shaped balloon will deploy from the CubeSat.

The balloon will reflect sunlight back to Earth, making the satellite visible to the naked eye.

It will remain in space for approximately two months.

Artist Trevor Paglen is working with the Nevada Museum of Art on the project.

‘Orbital Reflector is a satellite that will have no commercial, military, or scientific purpose,’ the museum says.

‘Instead, it will be a public sculpture, visible from the ground without a telescope – a satellite that belongs to everyone,’

It is housed in a small box-like infrastructure known as a CubeSat and launched into space aboard a rocket.

Once in low Earth orbit at a distance of about 350 miles (575 kilometers) from Earth, the CubeSat opens and releases the sculpture, which self-inflates like a balloon.

Sunlight reflects onto the sculpture making it visible from Earth with the naked eye — like a slowly moving artificial star as bright as a star in the Big Dipper.

The team is also partnering with the sky-watching app Star Walk 2 to ping users when Orbital Reflector passes your location (it will orbit the planet several times a day), and is hoping to raise the $1.3m needed for the project via Kickstarter.

You can also see the satellite’s flight data from our website, orbitalreflector.com.

‘The design has shifted from a sphere to a diamond throughout the course of development,’ the team said.

‘Once we started working with aerospace engineers to build a flight-worthy spacecraft, physics played a pivotal role.

‘The diamond shape Paglen created will be bigger, brighter, and better in flight than a sphere. 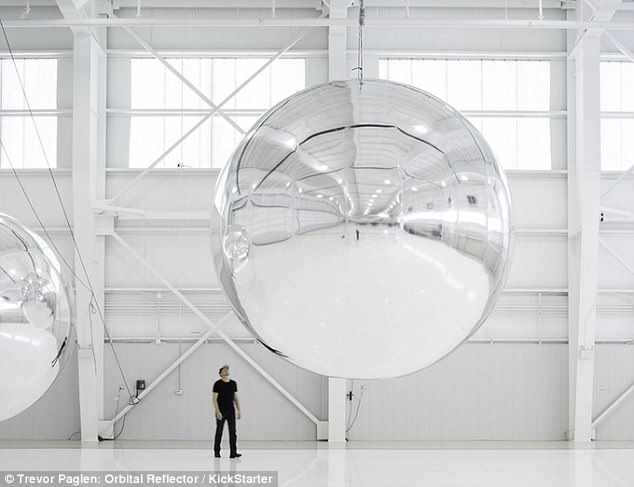 According to Paglan, the artist behind the project, ‘Orbital Reflector is a neo-minimalist sculpture, inspired by an alternative history of spaceflight that includes early Russian avant-gardists and forgotten NASA experiments.

Global Western is an aerospace firm working with Trevor Paglen and the Nevada Museum of Art to design and manufacture Orbital Reflector.

Spaceflight Industries will arrange for the launch of Orbital Reflector on board a SpaceX Falcon 9 rocket.