Thousands of children who suffer ‘glue ear’ could be spared surgery with the help of a wireless kit used by cyclists, scientists say.

The condition, which affects 80 per cent of youngsters, usually goes away on its own within days or weeks.

But if the hearing loss hampers their learning and development, children may need a small tube placed into their ear under general anaesthetic. Grommets, as they are known, drain away excess fluid that causes glue ear.

Researchers say the kit alleviates hearing difficulties caused by the condition, paving the way for children to avoid the operation.

More than 90 per cent of parents claimed their child’s hearing returned to ‘normal’ or ‘slightly below normal’ while using the kit. And none of them required grommets, according to the study published in the British Medical Journal Innovations. 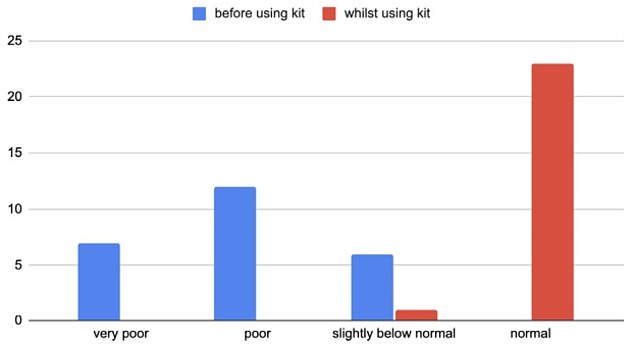 The wireless kits contain bone-conducting earphones, a Bluetooth microphone and an app about glue ear.

The earphones connect to the microphone and transmit the sound it picks up as vibrations through the bone of the skull directly to the inner ear, bypassing the area where fluid has built up from the condition.

Bone conducting earphones cost around £100 and are usually used by cyclists so they can still hear the sounds around them, as well as audio from their phone.

WHAT IS GLUE EAR?

Glue ear is when the ear canal fills up with fluid after a cold, cough or infection.

It usually clears up on its own within weeks, but can cause hearing loss in the meantime.

If the symptoms do not get better on their own, or it affects a child’s learning and development, their GP may refer them for treatment.

The two main treatments are temporary hearing aids or grommets – a small tube put in the ear.

Grommets drain fluid away, keep the eardrum open and fall out naturally within six to 12 months as a child’s ear gets better.

Hearing loss is the most common symptom of glue ear, along with earache and a ringing noise.

One in 10 children starting school in the UK have hearing loss due to glue ear.

And 80 per cent of youngsters suffer from the condition at some point.

Glue ear is a condition where the empty middle part of the ear canal fills up with fluid.

One in 10 children starting school in the UK have hearing loss due to glue ear.

But if hearing problems are affecting a child’s learning and development, they may be fitted with a temporary hearing air or grommets.

Hearing aids, which can cost up to £3,000, are ‘not an easy solution’ because multiple appointments are usually needed to set its volume correctly as a child’s hearing improves.

Around 30,000 people in the UK undergo grommet surgery every year.

And around a third of children develop an infection after the procedure, which can burst the eardrum or cause permanent scarring.

Researchers at Cambridgeshire Community Services NHS Trust tested the kits on 26 children with glue ear. All were aged between three and 11.

Youngsters wore the earphones at home and school, while their parents or teachers spoke into the microphone.

Parents answered questions about their children’s hearing before and after using the kit.

In the three months before the study, 73 per cent of parents said their child’s hearing was ‘poor’ or ‘very poor’.

And 88.5 per cent revealed their child ‘often’ or ‘always’ struggled to hear when in a group.

But using the kit improved youngsters’ hearing, with 92.3 per cent of parents saying their child’s hearing returned to ‘normal’ or ‘slightly below normal’.

And 84.6 per cent said they ‘rarely’ or ‘never’ had problems hearing when in a group.

The medics, led by Dr Tamsin Mary Holland Brown, said using the kits improved the children’s’ hearing at an important stage of their development.

But they noted the study was short-term and only involved a small group of affected youngsters.

Nonetheless, the experts said the kit ‘is a novel, new and effective approach to the management of glue ear’.

There was no control group that received standard care to compare the results with.

The study took place during the first wave of the pandemic when children’s audiology services and grommet operations ‘completely stopped’.