Large swaths of the US are bracing for one of the coldest Thanksgivings in decades as a pair of powerful winter storms threaten travel chaos for millions of Americans.

Over 100 million people are under weather warnings in 26 states from California to New York, including major transport hubs such as Los Angeles, Denver, Minneapolis, and Chicago as the busiest travel week of the year ramps up.

A strong storm expected to drop up to two feet of snow in parts of Colorado and Wyoming prompted airlines to issue travel alerts on Tuesday as the National Weather Service warned of possible blizzards and wintry conditions from the Rocky Mountains to the Great Lakes.

Another major storm is expected to descend on the West Coast over Tuesday and Wednesday, bringing ‘bomb cyclone’ conditions with over two feet of snow to the mountains in the Northwest and possible flash flooding in Southern California.

The storm system will then move into the Rockies toward the central US on Thanksgiving and into the weekend before dumping rain on the East Coast on Sunday.

Large swaths of the US are bracing for one of the coldest Thanksgivings in decades as a pair of powerful winter storms threaten travel chaos with strong winds, heavy rain and up to three feet of snow from the Rocky Mountains to the Great Lakes. The map above shows expected snowfall from Tuesday morning through Thursday evening 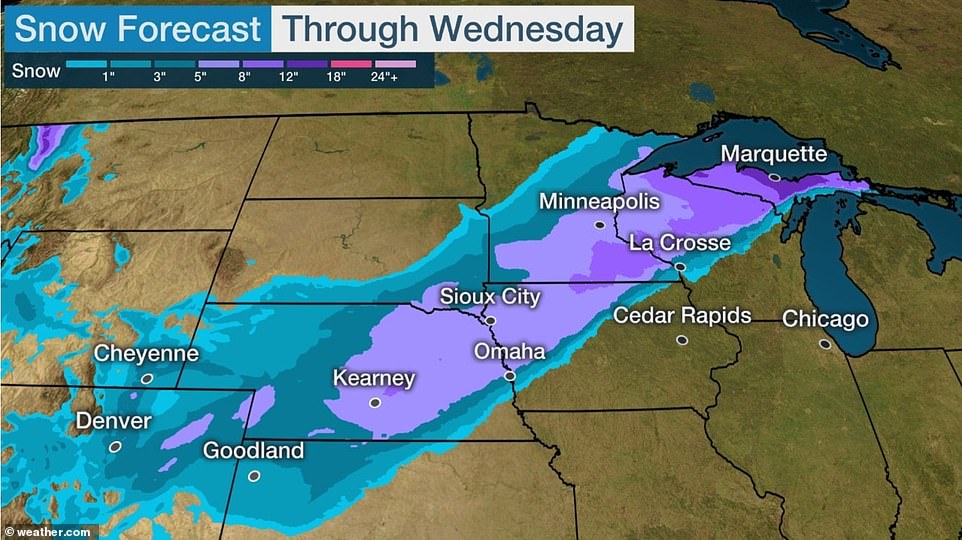 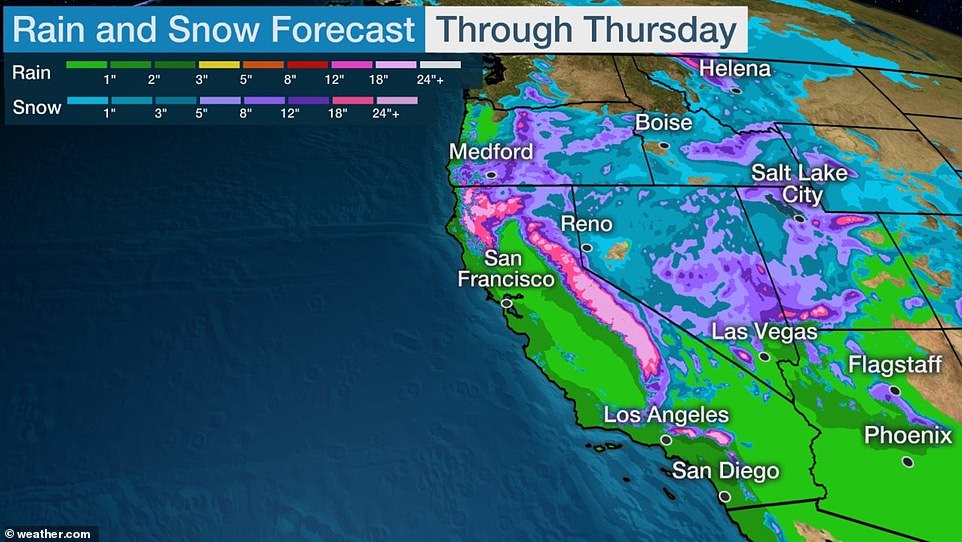 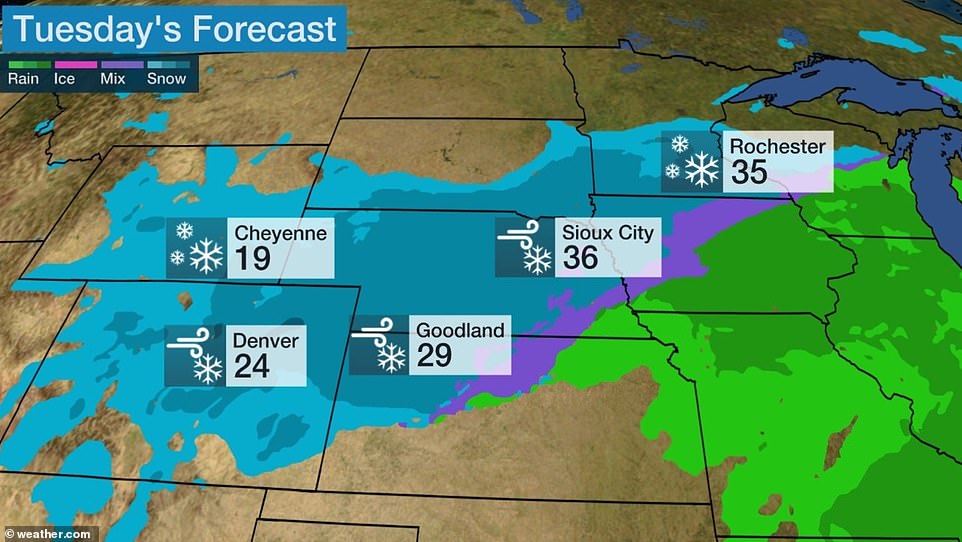 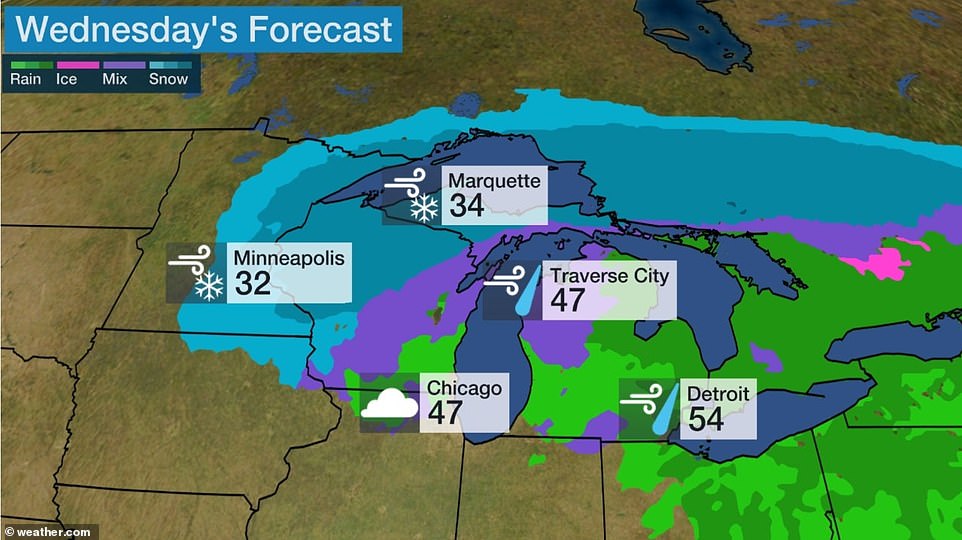 The first storm is expected to move into the Plains later in the day, bringing high wind and more snow to Minnesota, Wisconsin and upper Michigan. Minneapolis could see more than six inches of snow into Wednesday, along with wind gusts of 35 mph 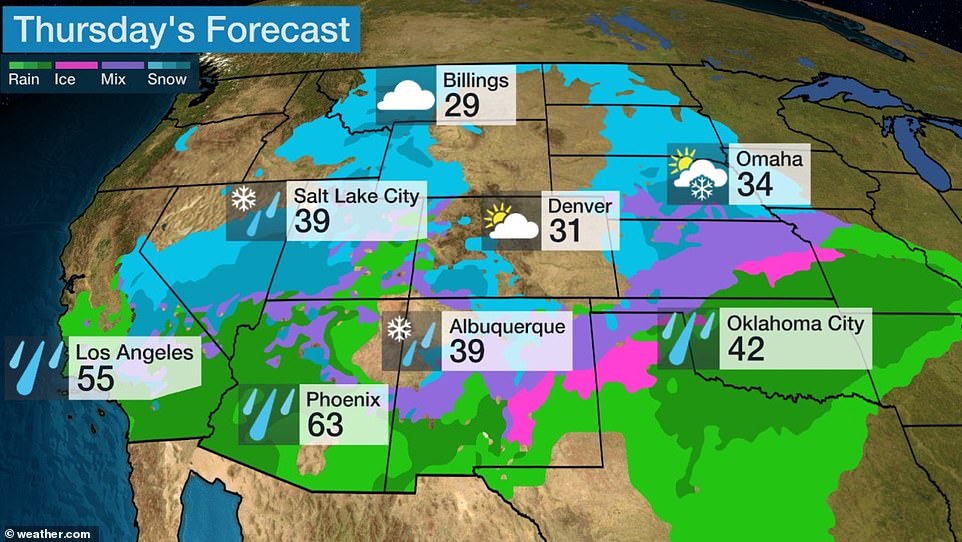 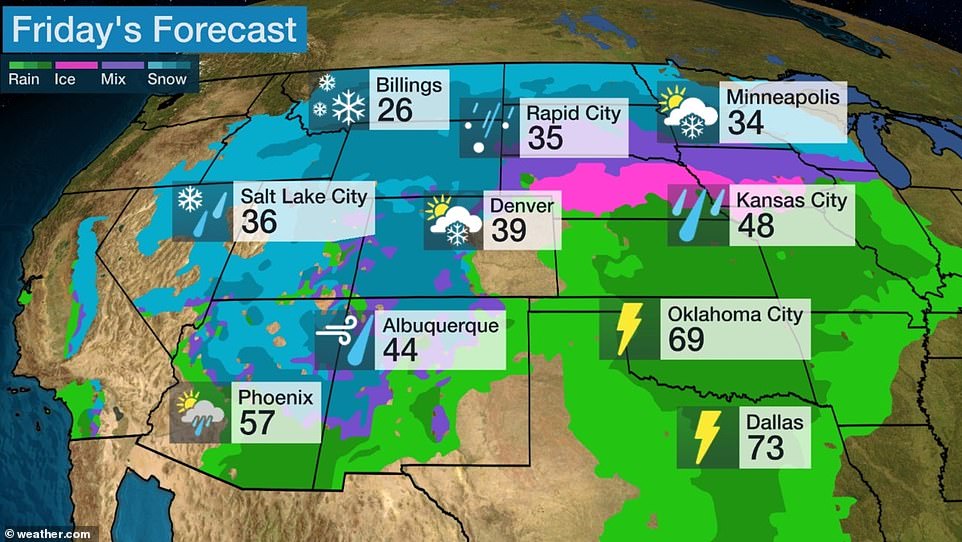 The second storm, brewing in the Pacific, is expected to hit the West Coast on Tuesday afternoon or evening, bringing snow to the mountains and wind and rain along the coasts of California and Oregon before moving inland by the weekend

Tuesday, November 26: Snowstorms are expected to hit the Sierra Nevada and Rocky mountains as well as portions of the Great Plains. Rain is due in the Midwest and Mississippi Valley.

Wednesday, November 27: A storm bringing rain is expected to batter most of the East, the Great Lakes will be windy and gusty, the Upper Midwest will be snowy, and precipitation is expected in the West and Southwest.

Expect delays in the Northeast, Appalachia, Minneapolis, Salt Lake City, Los Angeles, and the Midwest, where strong winds will make it harder to fly.

Thursday, November 28: The West and the Great Plains will be blanketed by either rain or snow on Thanksgiving Day.

Expect wet roadways from California to the Rockies as well as the Midwest.

Travel will be hazardous throughout the Rockies, the Plains, and the Mississippi River Valley.

Saturday, November 30: The storm continues to inch eastward, this time dumping rain in the Midwest and Southeast. Areas of Michigan, Wisconsin, and Minnesota are likely to see snowfall.

The first storm is already underway Tuesday morning as snowfall has been reported around Denver and the surrounding area.

About a quarter of Denver International Airport’s 1,500 flights were canceled this morning, and airport officials said more cancellations are likely. Snow is currently falling at a rate of three inches per hour over Denver, with up to 14 inches total expected.

The storm is expected to move into the Plains later in the day, bringing high wind and more snow to Minnesota, Wisconsin and upper Michigan.

Minneapolis could see more than six inches of snow into Wednesday, along with wind gusts of 35 mph.

The leading edge of the storm system will move into the Mississippi River Valley on Tuesday night with the potential for damaging winds, large hail and tornadoes in parts of Illinois and Missouri.

It could bring another round of snow to the Upper Midwest from Thursday through Saturday, and a chance of snow this weekend in interior New England, according to National Weather Service meteorologist Alex Lamers.

‘That could be a coast-to-coast storm,’ Lamers said.

It also could mean disappointment for fans of the larger-than-life balloons flown at Macy’s Thanksgiving Day Parade in New York.

Organizers were preparing for the possibility that they’ll have to ground the iconic balloon characters, given 40-50 mph gusts in the forecast.

Rules put in place after several people were injured by a balloon years ago require lower altitudes or full removal if sustained winds exceed 23 mph and gusts exceed 34 mph. The decision will be made on parade day.

The Minneapolis-St Paul metropolitan area could see its biggest November snowfall in nearly a decade, and travel is northwestern Wisconsin ‘is going to be chaotic’, said National Weather Service meteorologist Brent Hewett.

The Minneapolis airport could be hit, but Chicago, with its two big airports, should only see rain from the storm, weather service officials said.

The second storm, brewing in the Pacific, is expected to hit the West Coast on Tuesday afternoon or evening, bringing snow to the mountains and wind and rain along the coasts of California and Oregon.

Dangerous winds from the gathering storm on Monday flipped a tractor-trailer, downed power lines and temporarily closed a stretch of US Highway 6 south of Yosemite National Park near Bishop, California.

That storm is expected to move inland by Thursday, crossing the US and landing on the East Coast by the end of the weekend. 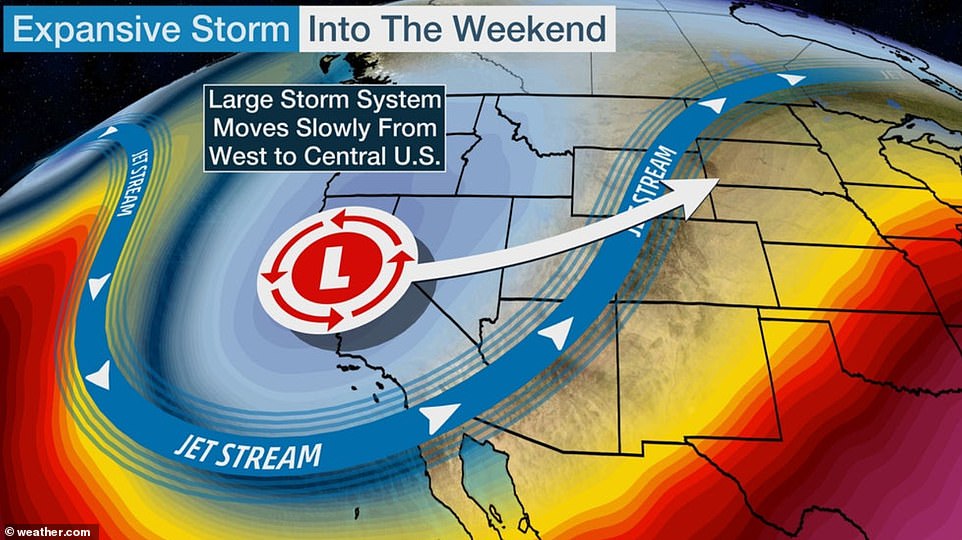 A low pressure system will move into the West Coast beginning late Tuesday, bringing wet conditions through the weekend

Over 100 million people are under weather warnings in 26 states from California to New York, including major transport hubs such as Los Angeles, Denver, Minneapolis, and Chicago as the busiest travel week of the year ramps up 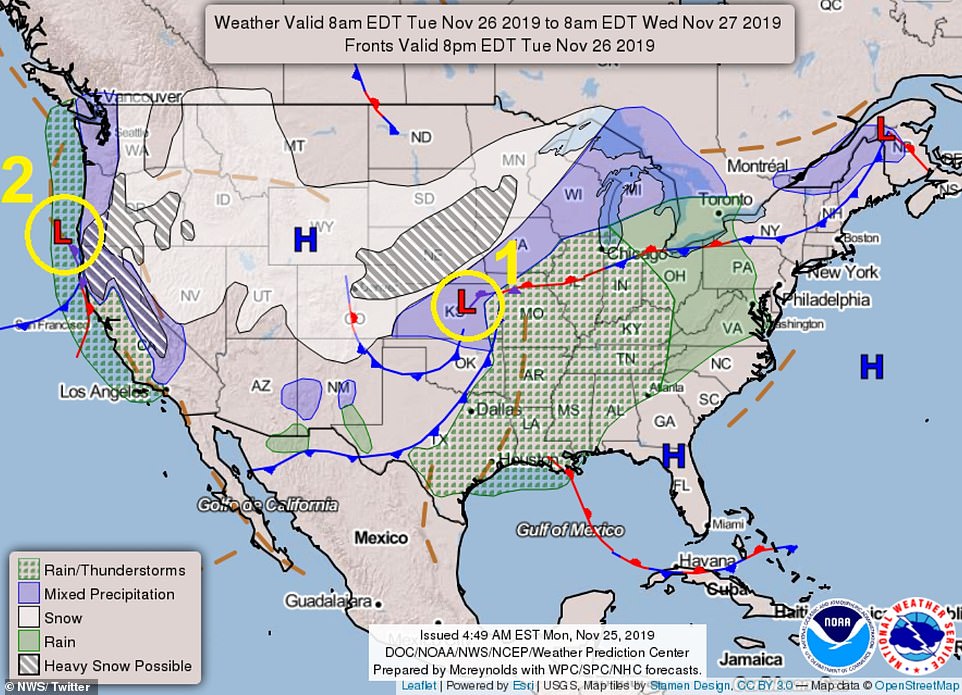 This month, AAA predicted that the number of travelers over a five-day stretch starting Wednesday will be the second-highest, behind only 2005, despite rising costs for a road trip.

At the start of the week, a gallon of regular cost $2.59, up three cents from a year ago, and rental cars averaged around $75 a day – their highest Thanksgiving price since AAA started keeping track in 1999.

Hotel rooms are a mixed bag, with prices falling from last year at highly rated hotels but rising slightly at midrange ones.

People might feel they can afford a trip because of low unemployment, rising household net worth, and the stock market´s continuing strength.

For those who are flying, the airlines expect traffic to be up about four percent from this time last year. 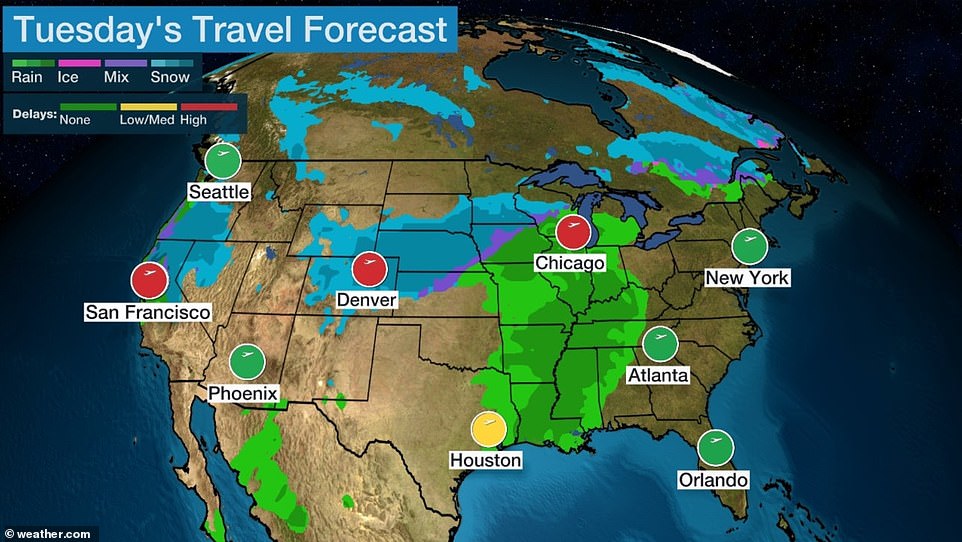 On Tuesday, travel delays are expected on the West Coast, the Great Plains, and the Upper Midwest 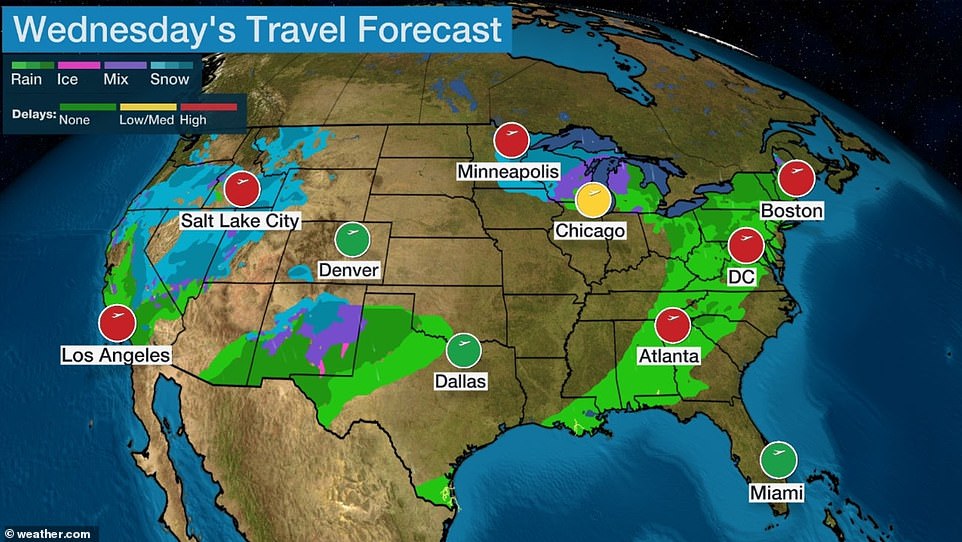 Thanksgiving Day is usually a light travel day for the airlines, but delays are still expected in the West as well as Texas 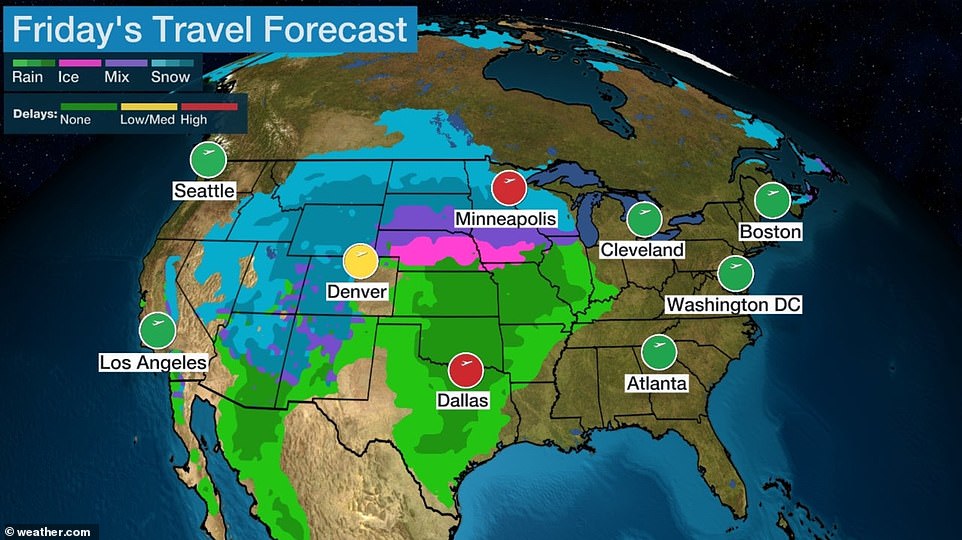 Most of the country will be blanketed by either rain or snow on the day after Thanksgiving, though the coastal regions are not forecast to be impacted by the weather 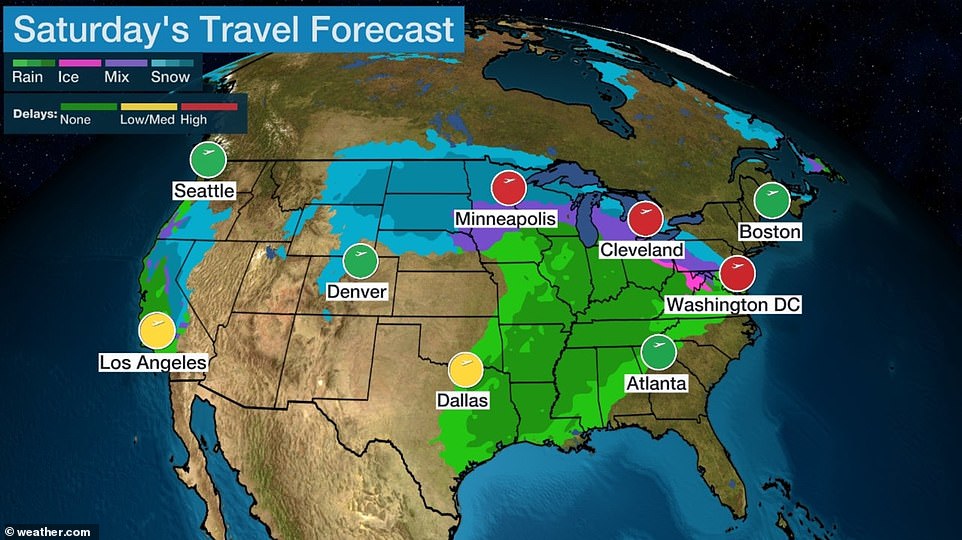 Saturday will also see substantial precipitation in much of the country 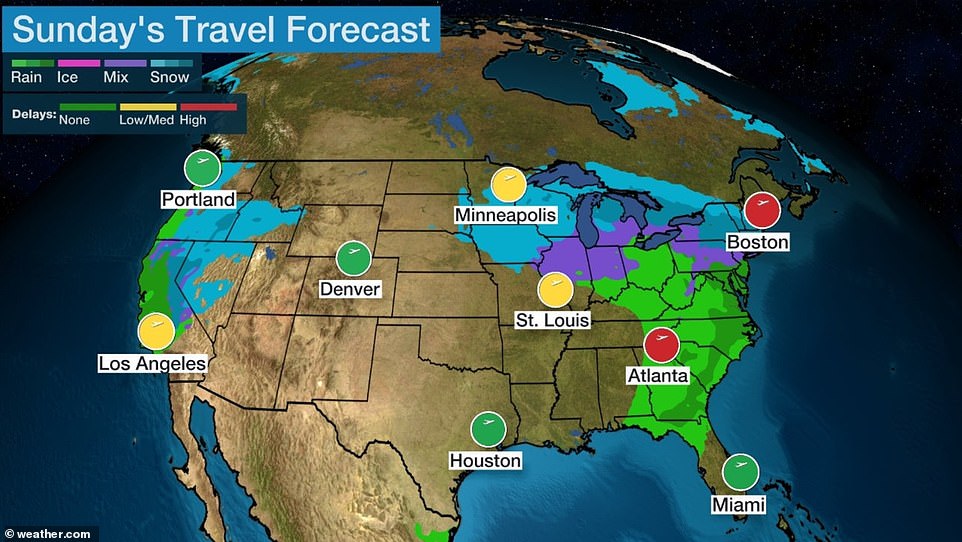 Rain and snow in the Northwest, Midwest, Northeast and the South could stall travel at the end of the holiday weekend

Airlines added about 850 flights and 108,000 seats per day on average to handle the increase over last year´s crowds, according to the trade group Airlines for America.

Airline travel before Thanksgiving tends to be spread out over several days, but most people want to go home on the Sunday or Monday after the holiday.

American Airlines plans to operate 7,046 flights Sunday, just one less than on August 8, its heaviest schedule this year.

In all, 22 of American’s 23 busiest days occurred during the summer vacation season, with this Sunday being the only exception.

‘Everybody talks about Thanksgiving being a busy travel time, but summer is Thanksgiving week for the entire summer,’ Ross Feinstein, a spokesman for the airline, told AP.

Thousands of airline catering workers plan to stage protests at 16 of the busiest airports across the country on Tuesday as three million passengers are set to make an early jump on the Thanksgiving holiday weekend.

UNITE HERE, a labor union which represents 300,000 workers in the hotel, airports, gaming, and food service industries, says the protests are aimed at pressuring American Airlines to boost wages and provide health benefits.

The demonstrations are not expected to have an impact on flights.

Airline catering workers say that American, which reported $1.9billion in profits last year, is the target of protests because the company determines wages and conditions through subcontractors LSG Sky Chef and Gate Gourmet.

Sky Chef, which was once a subsidiary of American Airlines, was bought and merged into LSG Sky Chef in 2001. 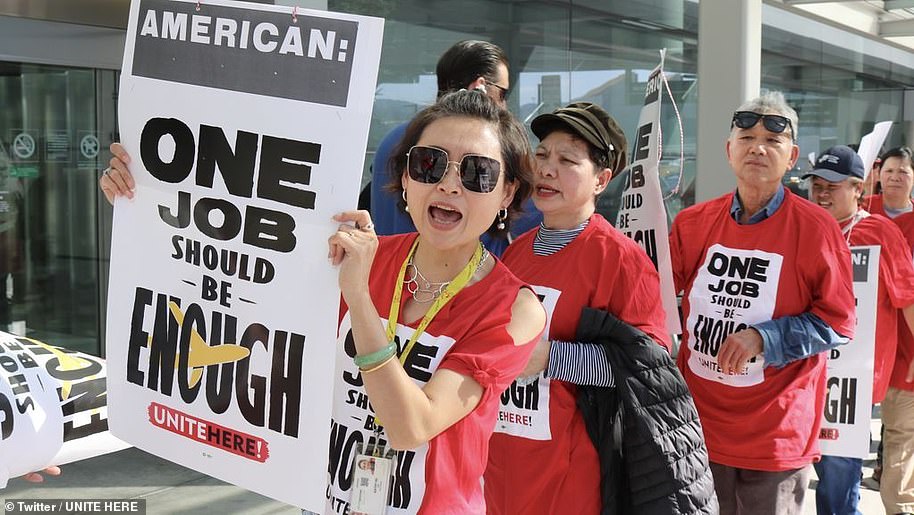 UNITE HERE, a labor union representing airline catering workers, will stage demonstrations at 16 airports nationwide on Tuesday. The above image is an undated file photo of a previous protest in San Francisco

This past summer, three unions representing more than 25,000 catering workers who serve customers aboard American, Delta, and United flights voted overwhelmingly to strike.

But the unions are currently negotiating with the airlines through the National Mediation Board, a federal agency that must legally grant permission to UNITE HERE to strike.

UNITE HERE says that it will strike as soon as the agency releases it from mediation.

Instead, he says the goal is to raise public awareness of the workers’ conditions.

‘We do want to get a message out. Our goal is to bring to light what’s going on with the plight of workers.

‘We’re trying to say that airline companies make billions and we want a piece of the American dream.’

Taylor said that even though American Airlines doesn’t directly employ catering workers, it has the power to improve wages and benefits.

‘You can’t take on every airline,’ Taylor said.

‘You have to deal with the largest. If American agrees that helps overall.’

The airline, for its part, says it is hopeful an agreement can be reached.

‘American Airlines respects and supports the rights of workers to join a union and bargain collectively – in fact, 84 per cent of our team members are represented by unions,’ American spokesperson Josh Freed said.

‘We believe in the collective bargaining process,’ Freed said.

‘We understand that a new contract will, ultimately, increase the costs to customers, including American.’ 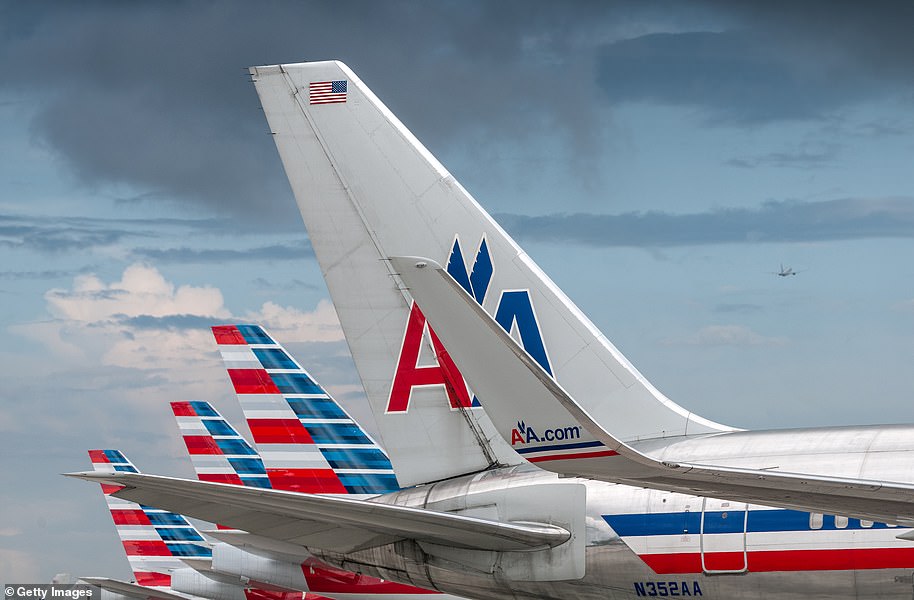 Reps for Gate Gourmet and LSG Sky Chefs said that while progress is being made in federally mediated talks, they criticized the union’s tactics.

‘We have talks scheduled in December and expect to reach a fair and competitive agreement at some point through continued federal mediation, as we have in the past,’ said Gate Gourmet spokeswoman Nancy Jewell.

‘Gate Gourmet has made significant improvements for our people in wages and benefits across the US,’ Jewell said.

‘We are disappointed by the union’s unreasonable and unaffordable demands for wage increases and medical benefits which hinder the long-term sustainability of our industry, create unrealistic expectations and delay progress.’

A spokesperson for LSG Sky Chefs told Forbes: ‘Our negotiating team and a federal mediator have been working since May 2019 to negotiate in good faith with the union representing our employees.

‘Our company has offered improvements in wages and is discussing numerous other issues covered by our collective bargaining agreement.

‘We feel progress is being made with the help of the federal mediator.

‘We remain committed to negotiating in good faith, and we hope that union members will act lawfully as they exercise their right to demonstrate or protest.’

UNITE HERE says that between 200 and 1,000 workers will be protesting at airports in 16 US cities on Tuesday.

UNITE HERE says that out of 4,100 Sky Chefs serving American Airlines at the company’s hubs, 30 per cent are uninsured while 35 per cent need government-subsidized health care for themselves or their children.

Reporting by Ariel Zilber for DailyMail.com