A 100-year-old coronavirus patient was presented with a birthday cake by medical staff at a hospital in Portugal shortly before learning he had beaten the infection.

His daughter Maria Jose, 61, called an ambulance for her father on 24 March when he  began showing symptoms of the deadly virus.

‘At first had a dry cough, then with lots of sputum and he started to get a fever which would not go away,’ she said. 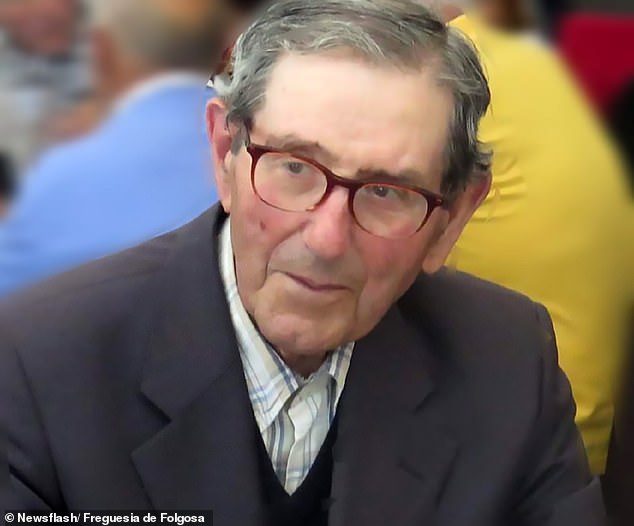 Mr da Silva is pictured in an undated photograph. His daughter Maria Jose, 61, called an ambulance on 24 March when her father started showing symptoms of the virus, including a dry cough and a persistent fever 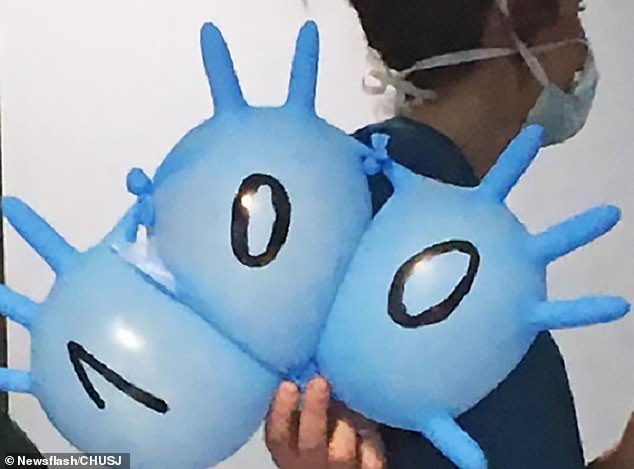 Pictured: A member of the medical team at University Hospital Centre of Sao Joao in the city of Porto in northern Portugal, holds up three inflated surgical gloves with Mr da Silva’s age written across them

‘When my husband and I were tested the results were positive for COVID-19. That’s when I realised that my father’s cough must also be related to this.’

The daughter said she ‘was afraid it was too late’ but never showed her father her fear but ‘just told him that in the hospital it would be easier to take care of him, knowing however that although he is very resistant and a fighter, it is impossible to win every battle.’

Da Silva was taken to the Infectious Diseases ward for treatment and on 31 March he turned 100 years old. As well as the cake, medics at the hospital made balloons out of medical gloves to celebrate. 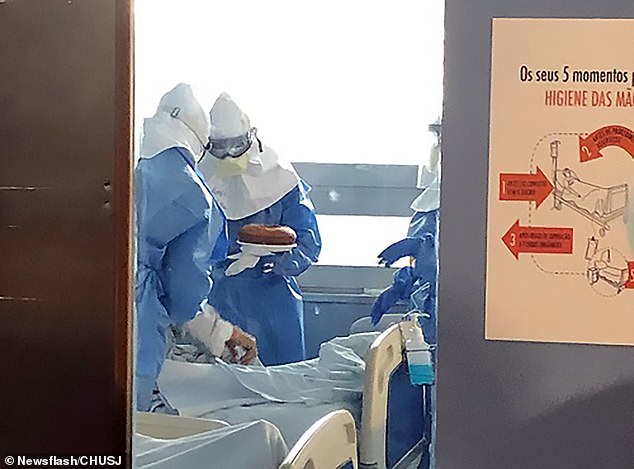 Pictured: Another image shows medical staff at the hospital celebrating Mr da Silva’s 100th birthday, shortly before he was told he had defeated the virus

Marlene Teixeira, the chief nurse on the ward, said ‘it makes me proud to be part of such a dedicated team, that does not fail to provide a highly qualified and humanised service even in the face of the pandemic we are experiencing. Luciano was very moved and grateful for the team’s gesture.’

The 100-year-old has now been given the all-clear from COVID-19 and Teixeira says they hope to discharge him from the hospital ‘very soon’.

His daughter says he still feels ‘fragile’ but ‘would be standing up if it weren’t for the oxygen’ he was receiving.

When asked what the secret to such an elderly man overcoming the virus, an unnamed doctor on the ward jokingly replied ‘he was widowed 40 years ago’.

According to the latest figures from the Johns Hopkins University, Portugal has suffered 12,442 confirmed cases of COVID-19 with 345 deaths and 184 recoveries.