Britain’s love affair with the caravan has never stopped growing ever since the first ‘house on wheels’ was built in 1885 before a post-war explosion in mobile homes fuelled by more family-owned cars.

According to the National Caravan Club, more than 130,000 people, including part time and seasonal staff are employed by the industry, with Britons spending approximately £2 billion and staying 50 million nights in caravans each year.

It all began shortly before the start of the internal combustion engine era when a Scottish medic, Dr William Stables commissioned his ‘Wanderer’ caravan, which was hauled by two horses.

For hundreds of years, there had been carriages hauled by horses – especially within the gypsy community, but Dr Stables, wanted to experience a travelling lifestyle and became the self-styled ‘Gentleman Gypsy’, creating a new leisure activity.

Scottish medic Dr William Stables, pictured with his dog and a friend, commissioned the world’s first leisure caravan in 1885. He wanted to be known as ‘The Gentleman Gypsy’ as he travelled around the country being pulled by two horses 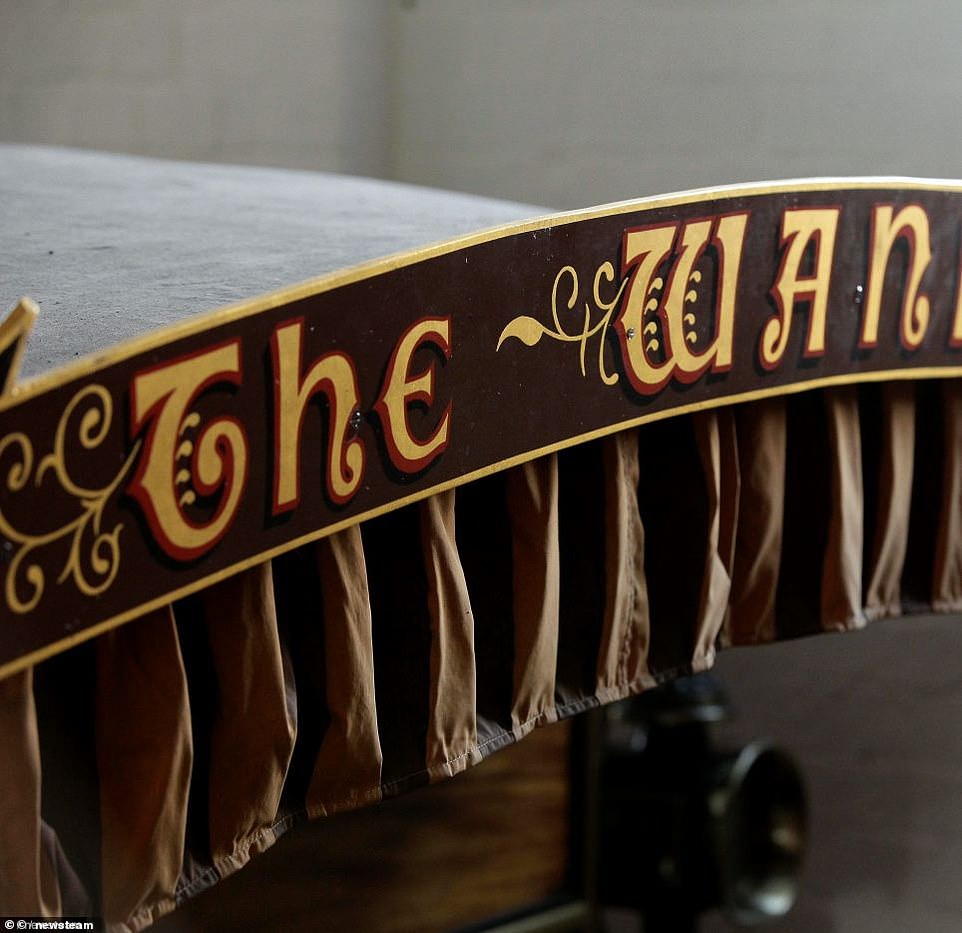 When the Wanderer was commissioned, the internal combustion engine was in its infancy, so it was not a practical option to haul something as heavy and motorised steam engines of the time were either incredibly bulky tractors or cars with very limited power and little practical range 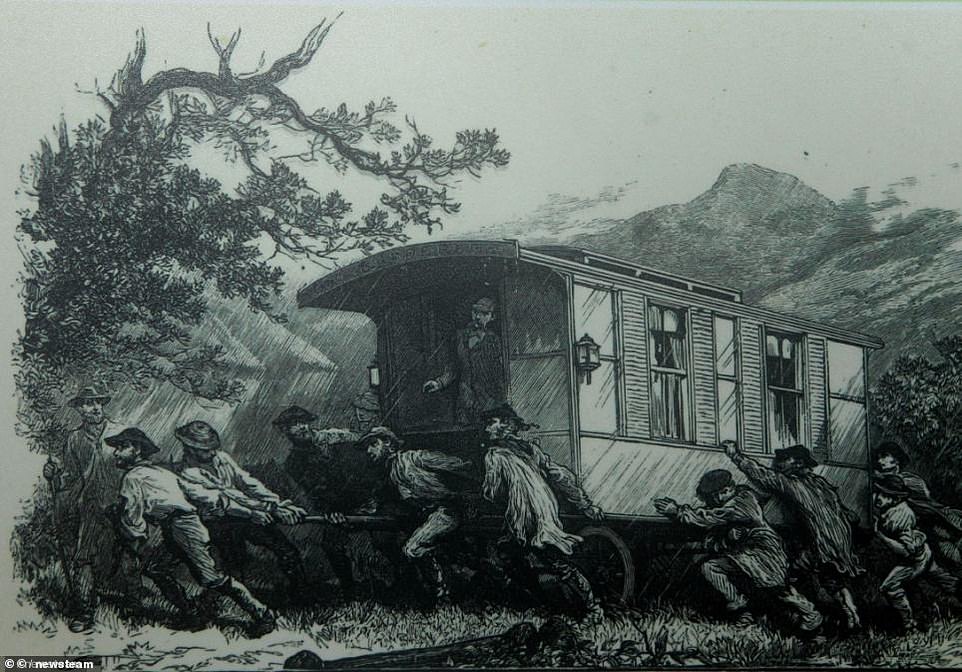 According to reports at the time, The Wanderer had problems navigating the nation’s poor quality unmetalled roads

Following the horrors of the First World War and with the growth in the number of personal motor cars, Britons were looking for new ways to spend their leisure time.

Bill Eccles Snr of Eccles Motor Transport Ltd spotted a potential new and lucrative market and created the world’s first prototype of a caravan specifically designed to be towed behind a car.

In 1919, he sold the first prototype to the Dowager Countess Rhonda and soon had 50 more orders on his books. During the 1920s, he continued finessing his designs with the company becoming a world leader.

The caravan was shown at the 1922 Motor Show in White City which increased demand further.

The firm conducted a number of stunts in the 1930s – including bringing a caravan to the Monte Carlo rally and towing another through the Sahara desert.

However, the Second World War forced the factory to shift production to war equipment. 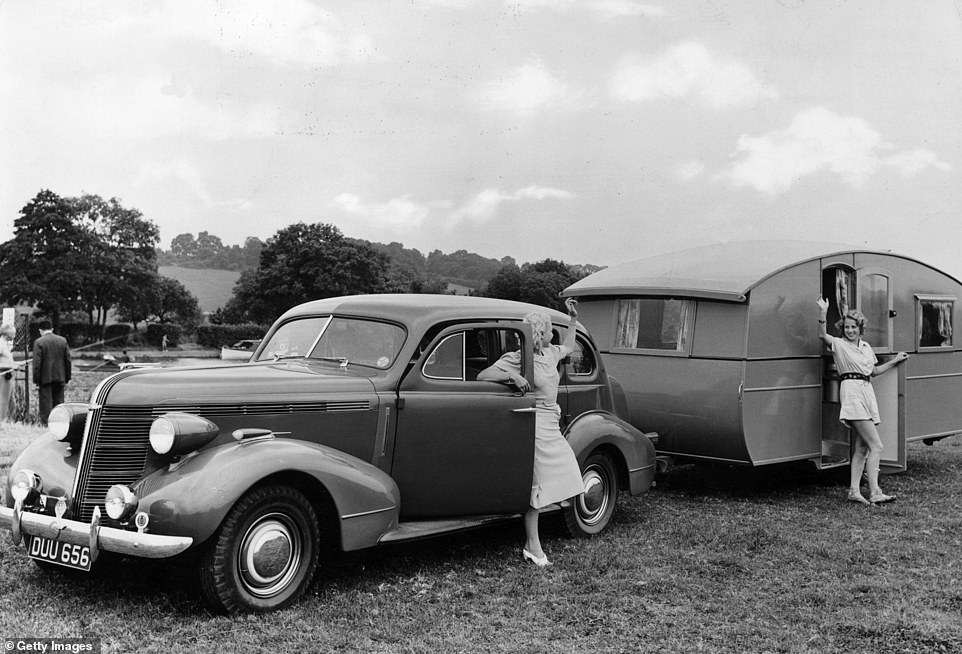 These two ladies were on a caravan holiday together in August 1939, just weeks before war was declared with Germany, driving what appears to be an incredibly unusual Packard Sedan 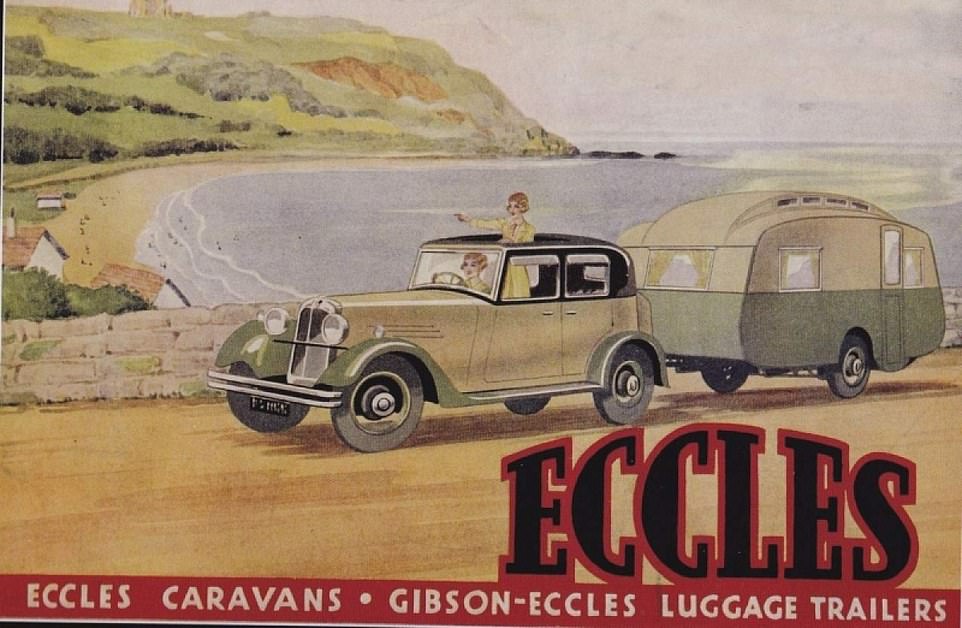 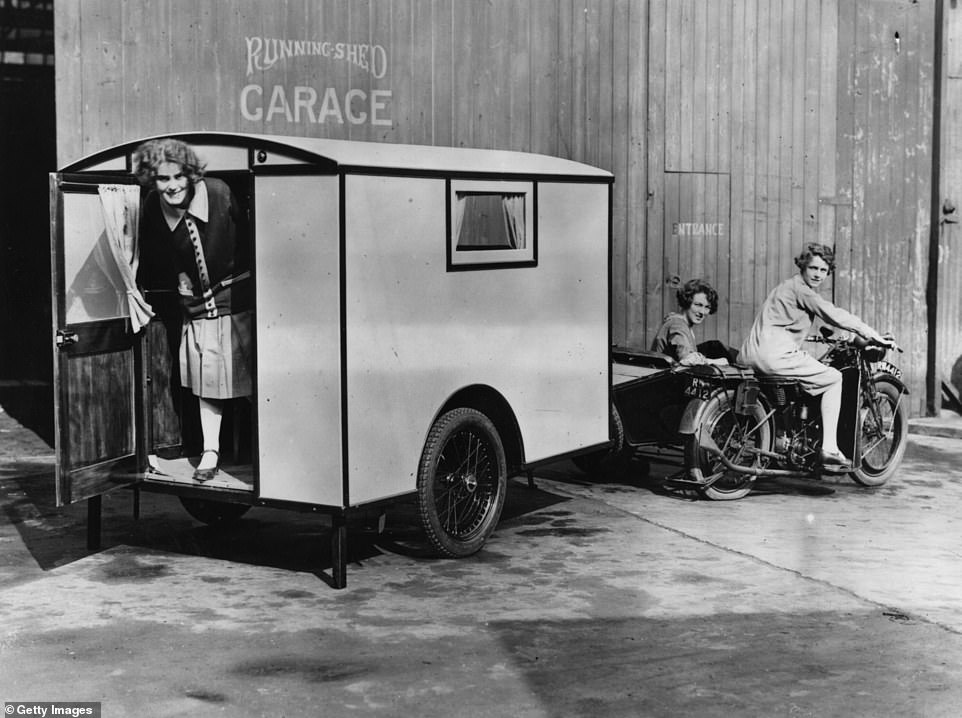 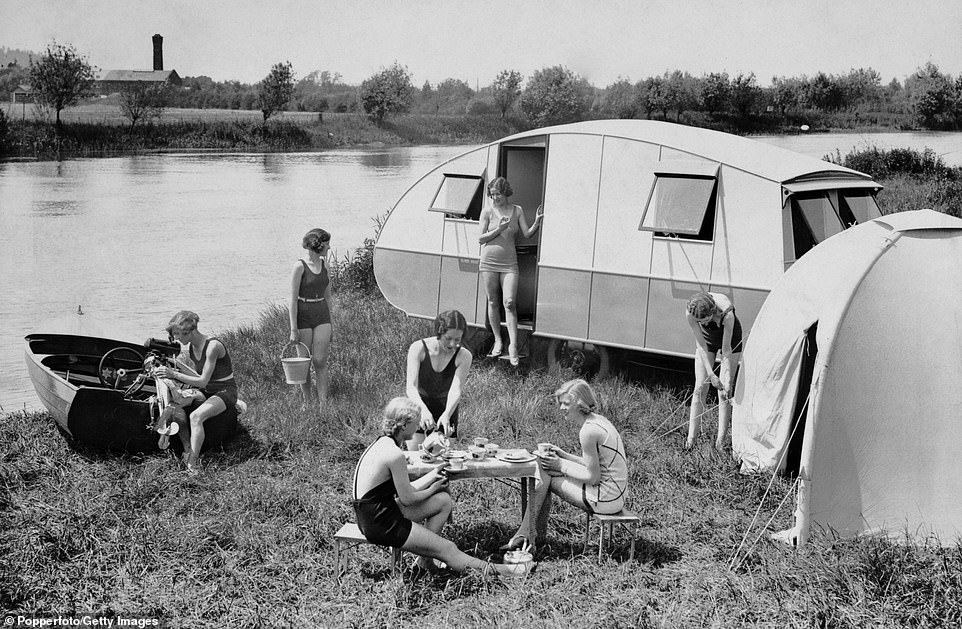 This group of friends had a caravan and a tent on the banks of the River Thames in Chertsey in the 1930s. One of the ladies appears to be tinkering with the Seagull outboard motor on the back of the boat, left 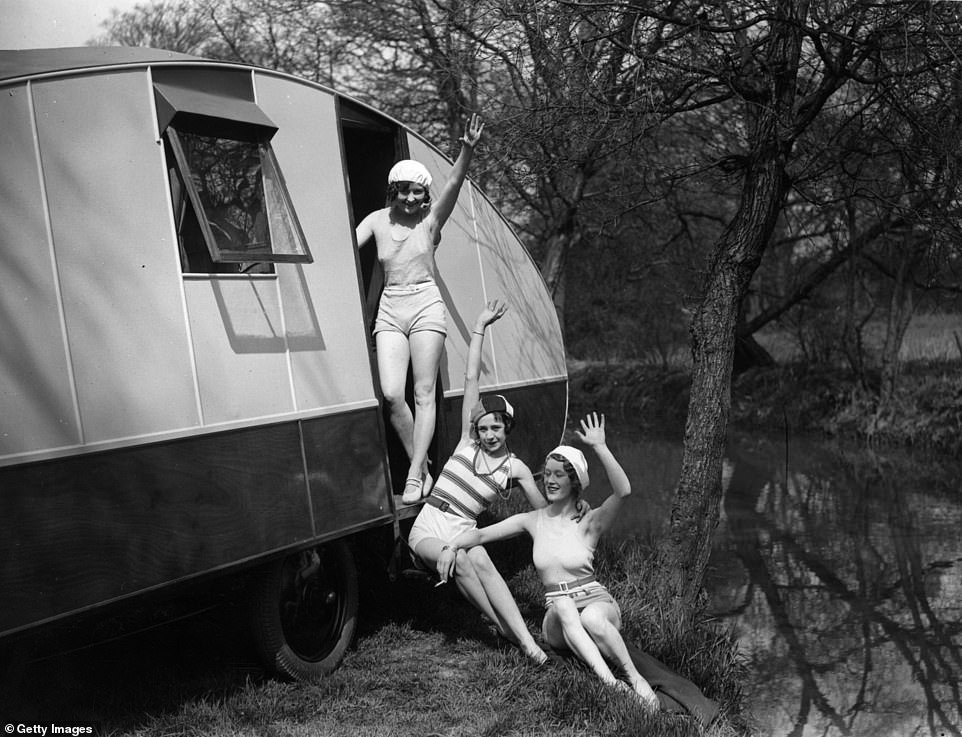 These three ladies appear to be enjoying a caravan holiday on April 15, 1930 under the shade of a riverside tree

According to The Mirror, Simon McGrath of the Camping and Caravanning Club said: ‘Since the first commercially produced towing caravan was launched in 1919, designs and manufacturing processes have evolved massively to make them lighter and real home from homes.

‘Early models were made of wood and often lined with hardwoods like mahogany, making them surprisingly heavy for such a diminutive size.’ 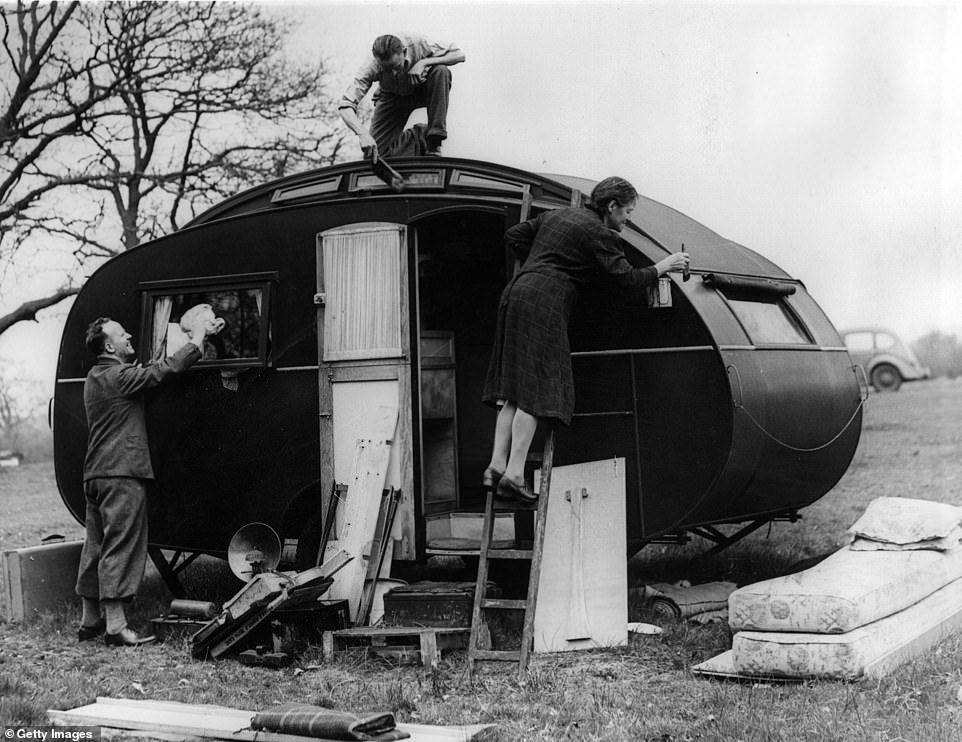 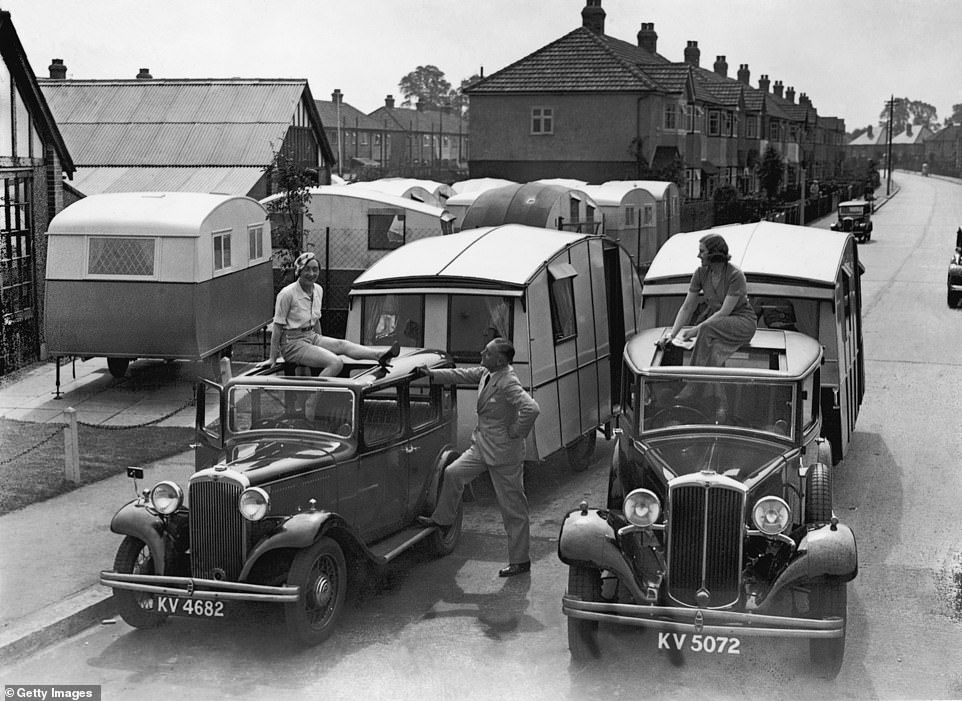 This couple, driving a Hillman Minx and a Hillmann Wizard, met outside a caravan depot in Malden, Surrey, to pick up their new mobile homes in the early 1930s 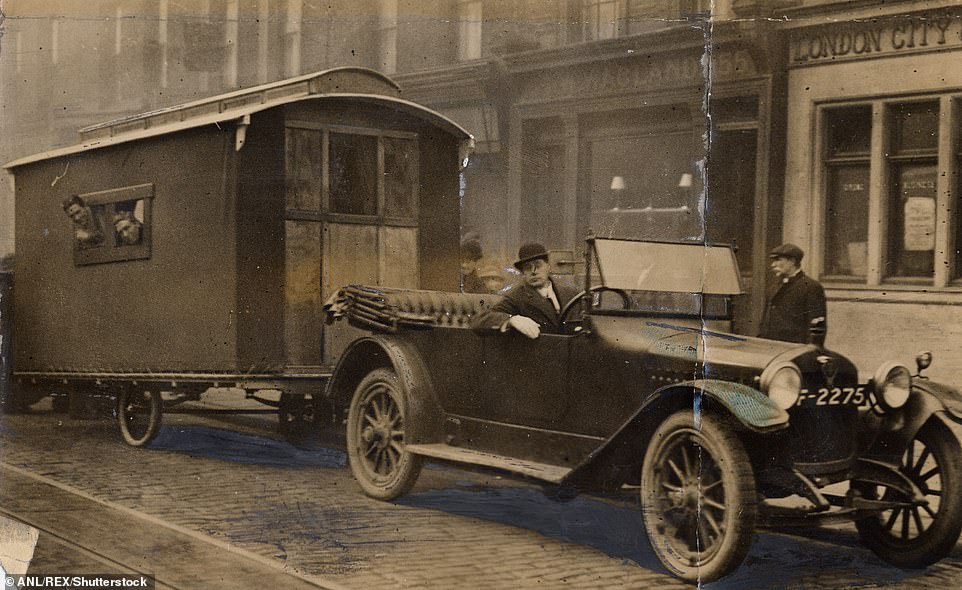 In 1919, there were 755 members of the Camping and Caravanning Club as people saw the possibilities presented by towing your holiday accommodation on the back of your car. This open top tourer was pictured driving through London towing a caravan in the 1920s 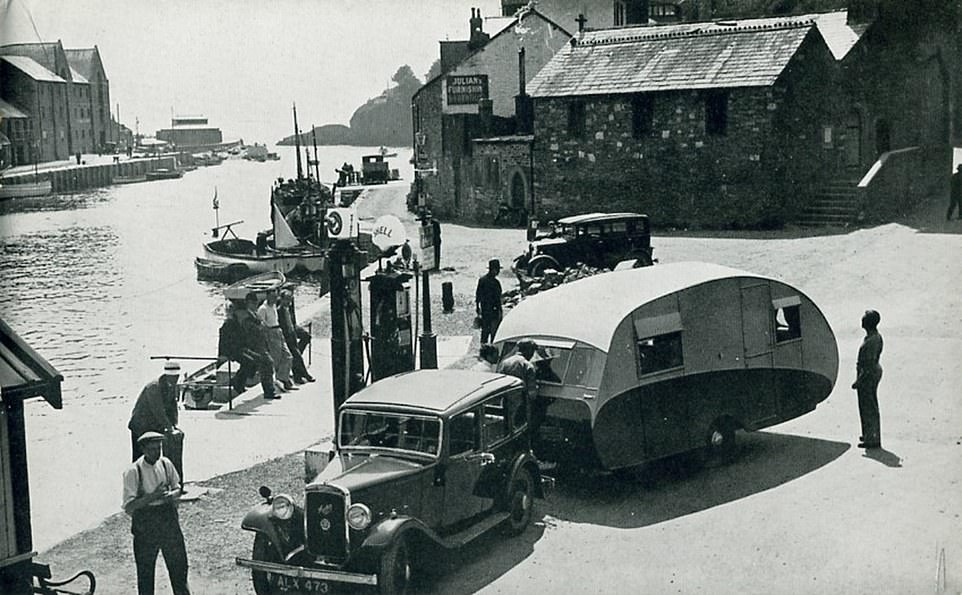 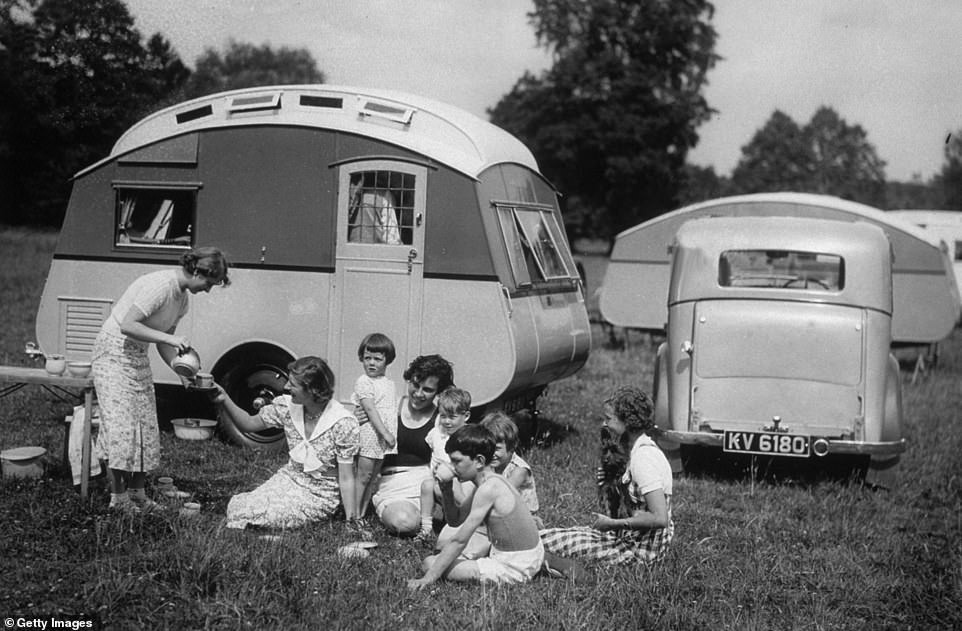 It is estimated that the caravanning industry is worth an estimated £6 billion to the UK economy each year. This family is enjoying their short break in Hurley Farm, near Maidenhead, Berkshire around 1934, with what appears to be a Morris 8 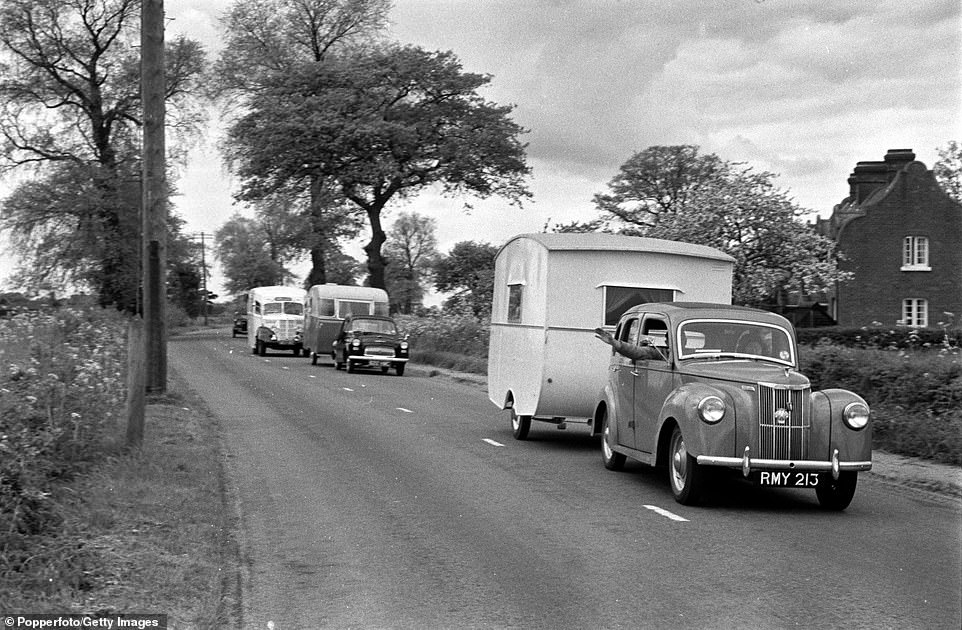 The growth in popularity of the motorcar allowed owners to buy their own caravans and explore the country, such as this scene of two caravanners heading to their campsite in 1956, one of whom is driving a 1950s Hillman Minx while the other is in an Austin A40 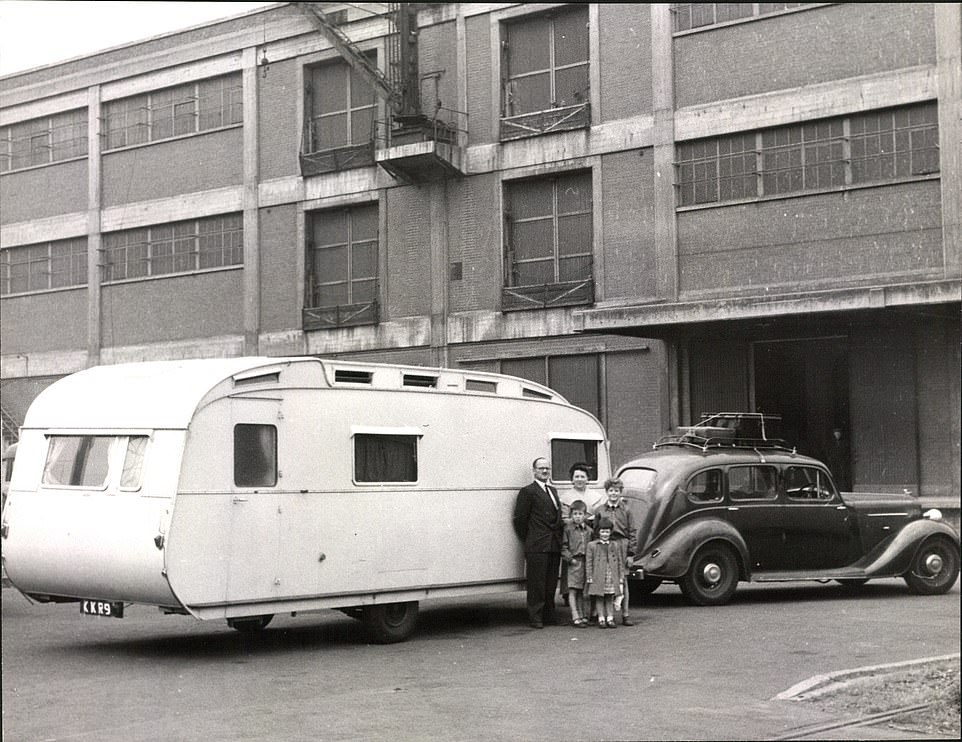 Some Britons, such as Frank Taylor, his wife Joan and their children, took caravanning to an extreme, using theirs to tour Canada 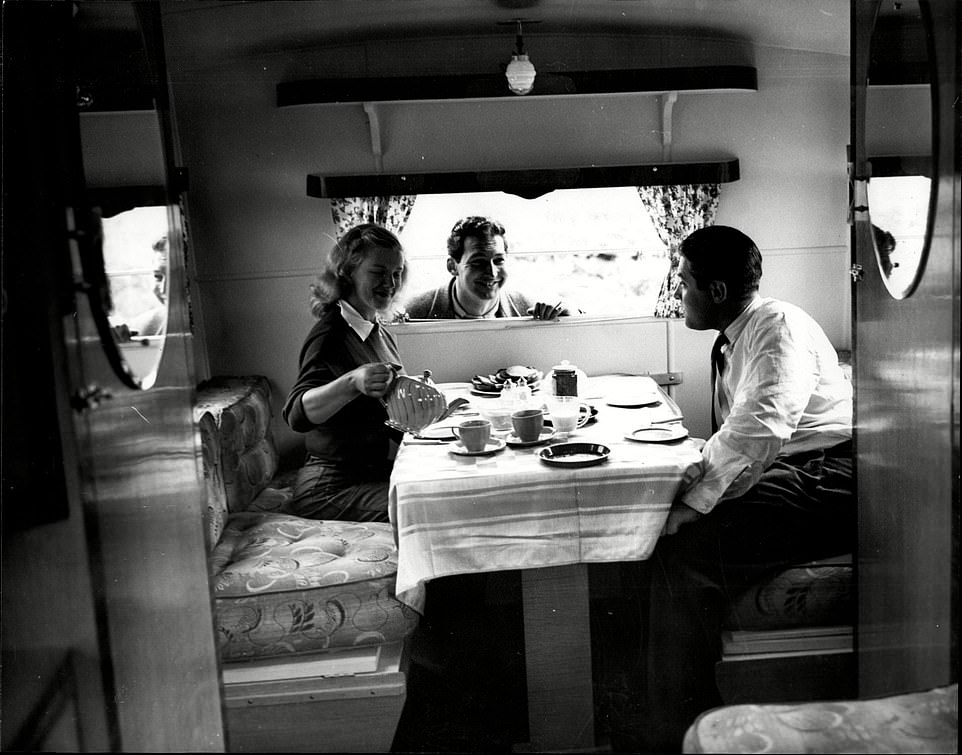 Actors such as Shelia Hamilton, pictured, with co-stars Jack Harnett and Ron Priestly in a touring caravan

Today, the industry is worth approximately £6bn to the UK economy

The first commercially available caravans cost approximately £100, which works out at about £5,000 in today’s money.

Unlike early caravans, today’s models are well insulated, have plenty of modern appliances and even satellite dishes so people can keep up with their favourite TV shows while on the road. 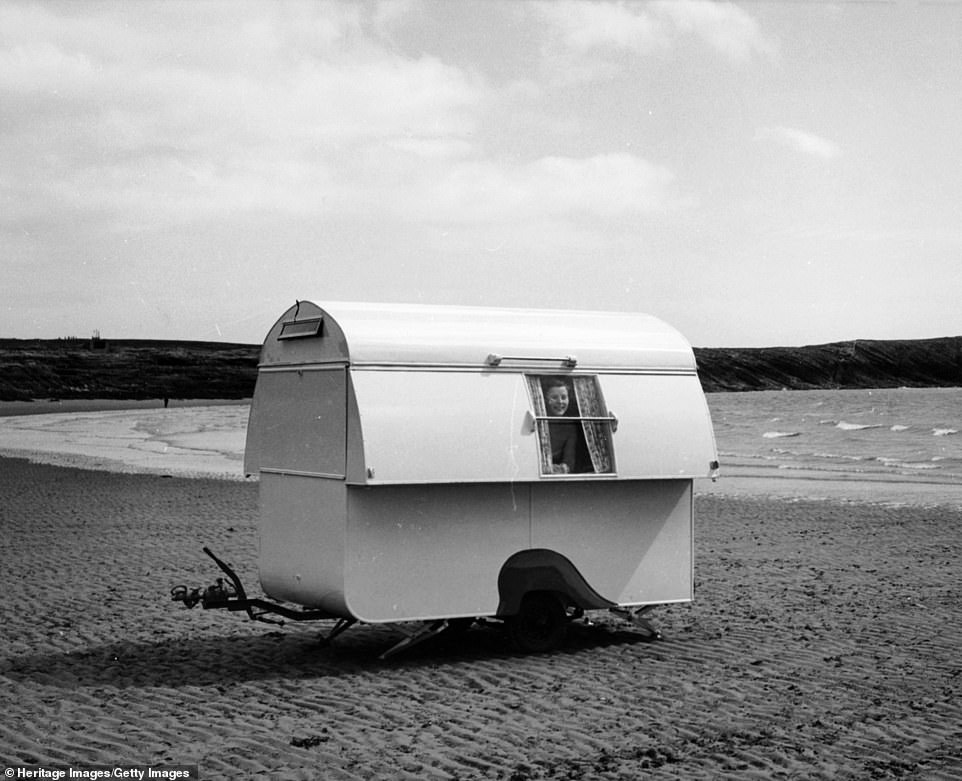 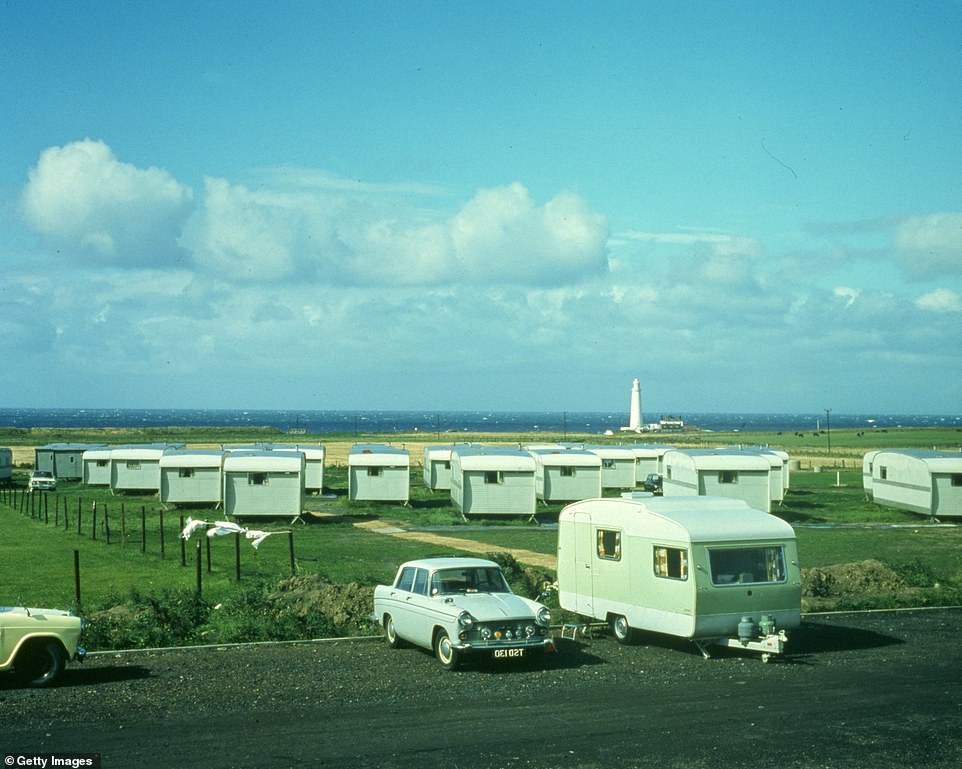 By the 1960s, there were an estimated 50,000 caravanners in Britain, encouraged by the opening of the motorway network, such as The Feather’s Caravan Park, Whitley Bay in Tyne and Wear, where this Hillman Minx was parked 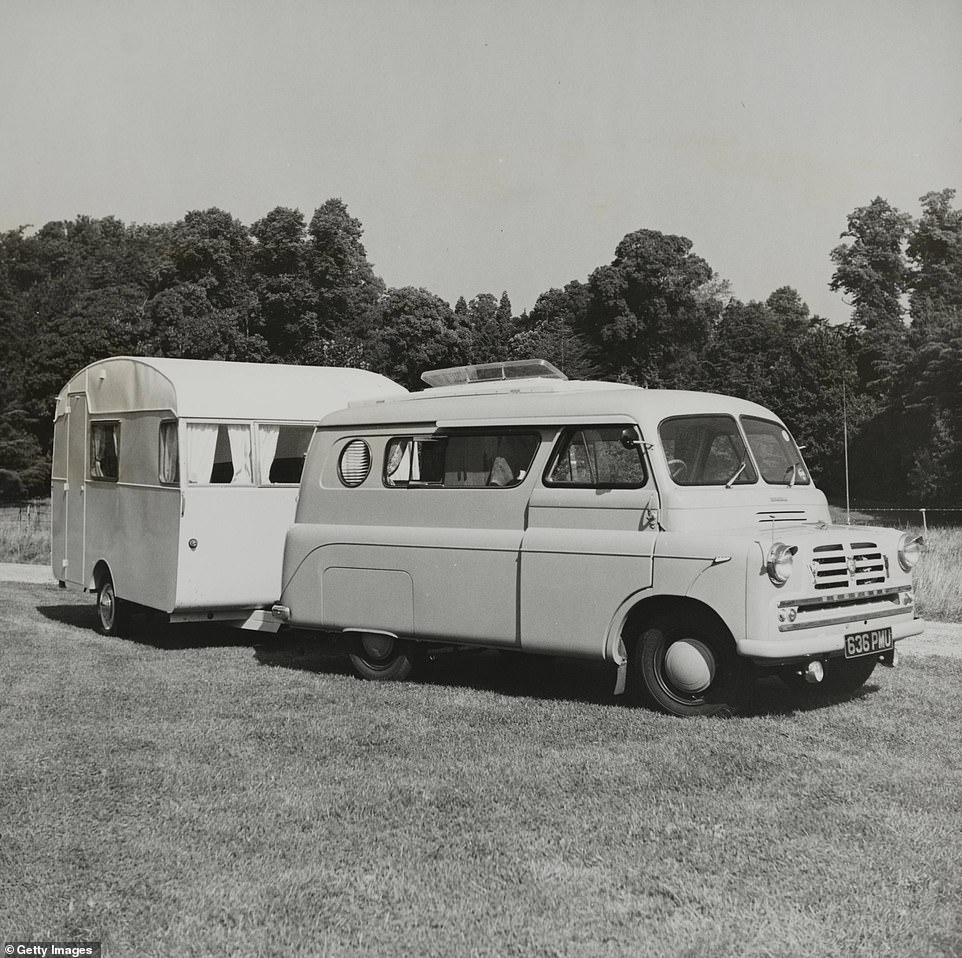 The caravanning craze also led to the creation of motorhomes – specially converted vans which kitchens and bunk beds. This image shows a Dormobile caravan towing an Alpine Sprite 4 berth caravan into a Caravan Club site at Harleyford, near Marlow, Buckighamshire in the late 1950s or early 1960s 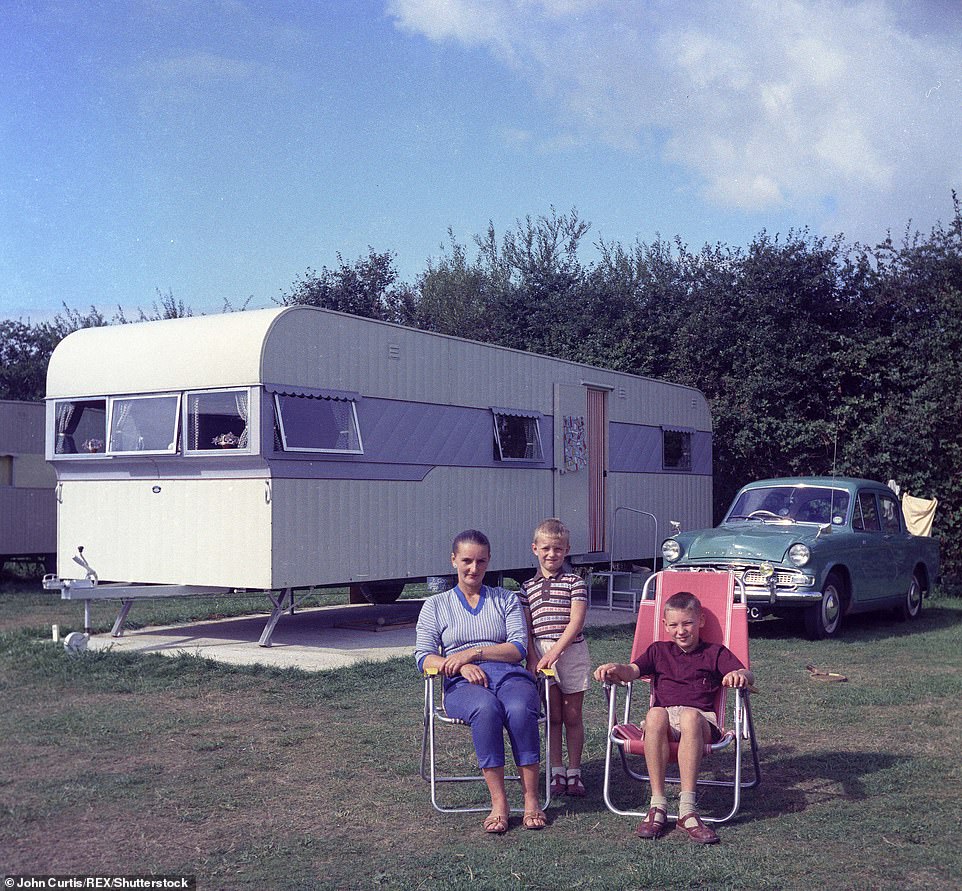 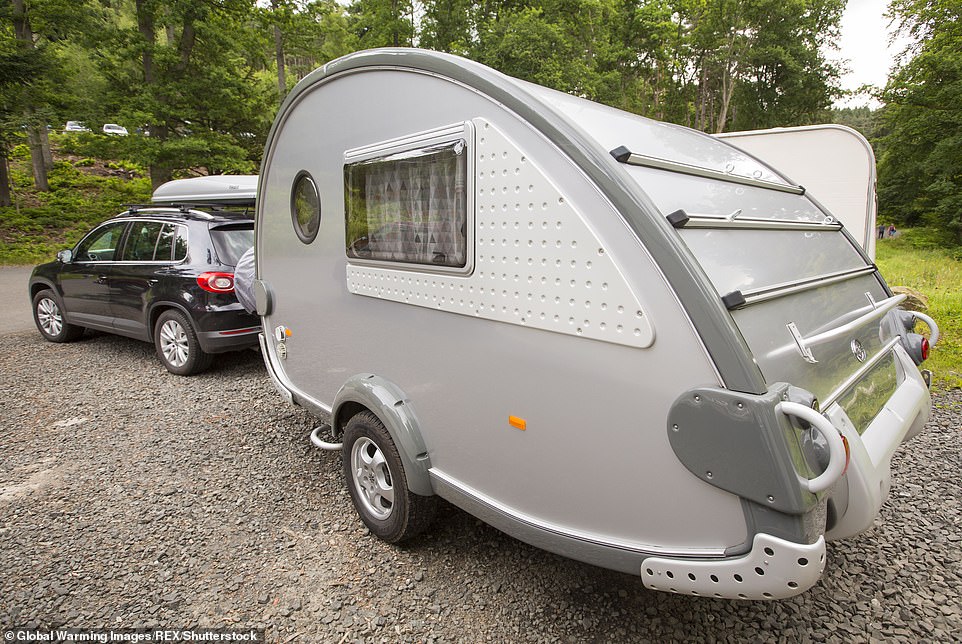 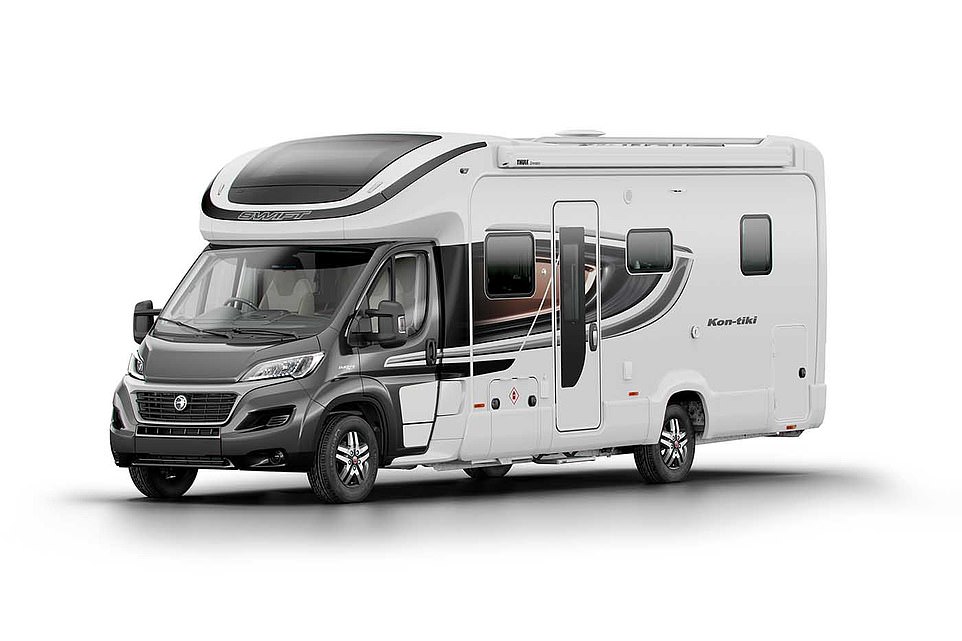 Some modern motorhomes can cost as much as £146,000 depending on their size and the level of equipment inside 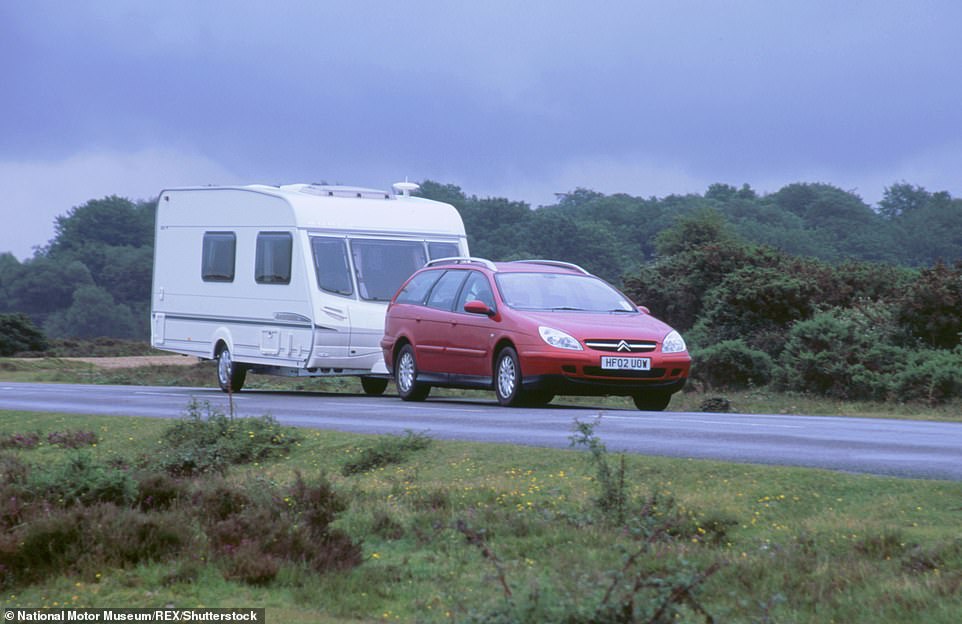