A 1,000-year-old medieval remedy containing onion, garlic, wine, and bile salts could be used to treat diabetic foot ulcers that are resistant to antibiotics.

UK scientists have turned to the natural historic remedy known as Bald’s eyesalve to fill a gap in the antibiotic market.

The remedy targets biofilms – slimy layers made from a community of microbes – that show resistance to antibiotic drugs currently on the market.

Natural medieval potions such as Bald’s eyesalve could be an answer to antimicrobial resistance (AMR) – when bacteria adapt in response to modern antibacterial medicines.

The Balds Eyesalve mixture in the lab, made from garlic, onion, white white and bovine bile salts. Medieval recipes using natural antimicrobials from every day ingredients could help find new answers to the challenge presented by anti-microbial resistance

Bald’s eyesalve is an ‘ancient-biotic’ that requires the combination of all ingredients for potent activity against bacterial strains.

It includes bile salts, which are made in the liver to aid the digestion of fats but are also sold as supplements.

Bacteria can exist either as individual planktonic cells or as a multicellular collective known as a biofilm.

Biofilms are harder for antibiotic drugs to eradicate because they secrete a matrix made of sugar molecules, which form a kind of armour that acts as a physical and chemical barrier. 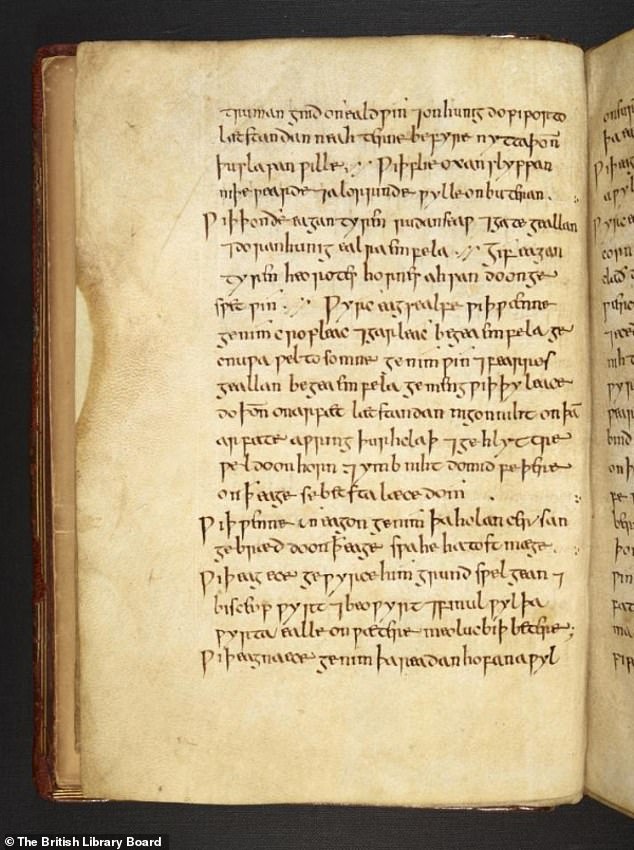 The remedy text as it appears in Bald’s Leechbook, an Old English medical text book likely compiled in the ninth century.

Biofilms are communities of microbial cells naturally accumulate on a variety of surfaces – from plastic medical equipment to the surface of the human body.

A biofilm essentially helps protect bacteria from antibiotics, making them much harder to treat.

Non-healing, infected foot ulcers, which can be a complication of diabetes, provide an especially sobering example and are particularly difficult to target using antibiotics.

Even if the infection is apparently successfully treated, there is a high chance of recurrence and an estimated 50 per cent of those affected die within 5 years of ulcer development.

Biofilm infections are estimated to cost the NHS over £1 billion every year, with this cost only set to increase.

‘We have shown that a medieval remedy made from onion, garlic, wine, and bile can kill a range of problematic bacteria grown both planktonically and as biofilms,’ said Dr Freya Harrison from the University of Warwick.

‘Because the mixture did not cause much damage to human cells in the lab, or to mice, we could potentially develop a safe and effective antibacterial treatment from the remedy.’

The University of Warwick worked with microbiologists, chemists, pharmacists, data analysts and medievalists at Nottingham and in the US.

Each of Bald’s eyesalve ingredients has known antimicrobial properties or compounds.

The garlic and onions used to make the mixture, which were purchased from supermarkets, had their outer skin removed and were finely chopped.

Equal volumes of garlic and onion were crushed together with a mortar and pestle for two minutes before being combined with equal volumes of organic dry white wine, (11% ABV, sourced from Avalon Vineyard in Shepton Mallet, Somerset) and bovine bile salts, which are usually given to help with the digestion of fats.

The mixture was stored in sterilised glass bottles in the dark at 7.2°F (4°C) for nine days, after which it was strained and centrifuged for five minutes and then filtered before being applied to bacteria.

The formula had promising antibacterial activity and caused low levels of damage to human cells, the team found.

It was found to eliminate five pathogens, including Staphylococcus aureus, which can cause serious infections like blood poisoning and toxic shock syndrome.

All five of the bacteria can be found in the biofilms that infect diabetic foot ulcers and can be resistant to antibiotic treatment.

These debilitating infections can lead to amputation to avoid the risk of the bacteria spreading to the blood, known as bacteremia. 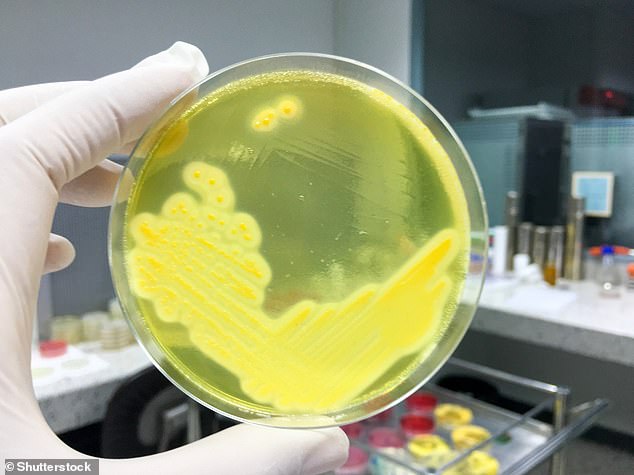 Staphylococcus aureus grow on Mannitol salt agar. S. aureus is a type of bacteria that is resistant to several widely-used antibiotics, which makes it particularly hard to treat. It can cause common skin infections including abscesses, respiratory infections such as sinusitis and food poisoning

Bald’s eyesalve remedy was effective against a range of Gram-negative and Gram-positive wound pathogens in planktonic culture.

This activity is maintained against the following pathogens grown as biofilms:

3. Staphylococcus aureus – a common cause of skin infections including abscesses, respiratory infections such as sinusitis, and food poisoning.

4. Staphylococcus epidermidis – a common cause of infections involving indwelling foreign devices such as a catheter, surgical wound infections, and bacteremia in immunocompromised patients.

The team then conducted an  assessment of whether any individual ingredient or the sulphur-containing compound allicin (from garlic) could explain its effectiveness.

Garlic contains a compound called allicin, which is produced when its cloves are crushed or chopped, and can be toxic in high concentrations.

The chemical compound is described as providing a natural antimicrobial defence by inhibiting activity of a key bacterial enzyme called DNA gyrase, which is needed for efficient cell division.

However, garlic alone has no activity against biofilms, and therefore the anti-biofilm activity of Bald’s eyesalve cannot be attributed to a single ingredient and requires the combination of all ingredients to achieve full activity.

Wine, bile or onion alone were also much less effective than the full remedy.

Despite this, its absence from the full remedy was shown to cause a large drop in activity against S. aureus biofilms.

The role of wine in the full recipe may be more to do with its physical properties, such as its ethanol content or low pH.

Ethanol is a well-known extraction solvent and may allow better diffusion through biofilms, while the lower pH may activate pH-dependent anti-bacterial compounds.

Further work is needed to explain the exact combination of natural products responsible for the anti-biofilm activity.

‘Most antibiotics that we use today are derived from natural compounds, but our work highlights the need to explore not only single compounds but mixtures of natural products for treating biofilm infections,’ said Dr Harrison.

‘We think that future discovery of antibiotics from natural products could be enhanced by studying combinations of ingredients, rather than single plants or compounds. 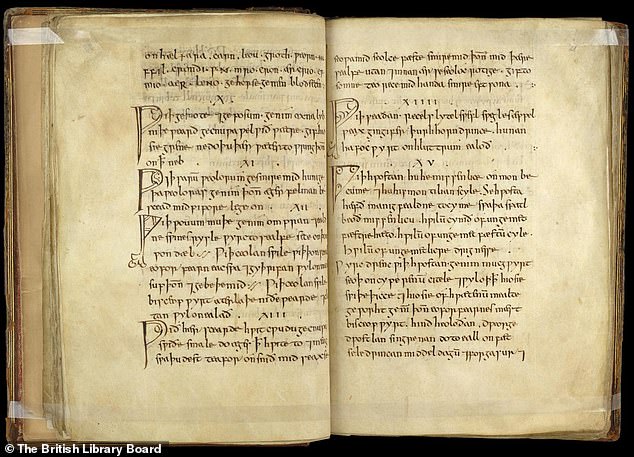 A page from Bald’s Leechbook. Its recipes are drawn from Greek and Roman authors and late Antique authors such as Alexander of Tralles as well as physicians with Anglo-Saxon names

‘In this first instance, we think this combination could suggest new treatments for infected wounds, such as diabetic foot and leg ulcers.’

When considering natural products as a potential source of anti-biofilm agents, there’s the possibility that any success they have could rely on creating ‘a cocktail of different products’, the researchers say.

In previous research, Professor Christina Lee, from the School of English at the University of Nottingham, had examined Bald’s Leechbook, an Old English leatherbound volume in the British Library, to see if any of the remedies really worked.

The Leechbook is widely thought of as one of the earliest known medical textbooks and contains Anglo-Saxon medical advice and recipes for medicines, salves and treatments. 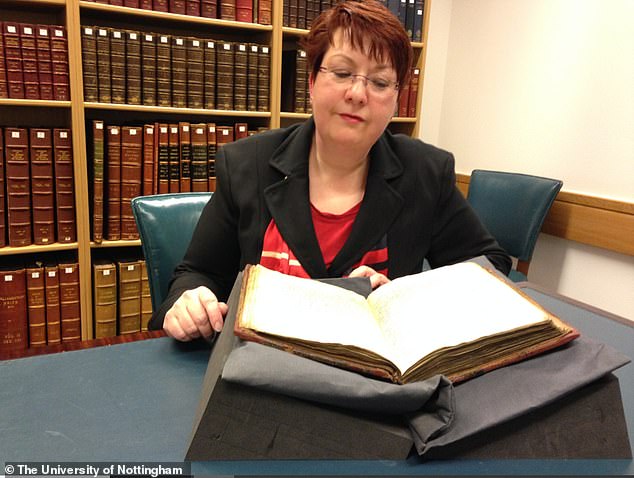 Dr Christina Lee with the Leechbook. The manuscript takes its name from læca, the Old English word for physician, according to the British Library

‘It shows that people in Early Medieval England had at least some effective remedies.

‘The collaboration which has informed this project shows the importance of the arts in interdisciplinary research.’

The manuscript takes its name from læca, the Old English word for physician, according to the British Library.

This word later became associated with the leeches that were used for bloodletting in pre-modern medicine, and memorably parodied on the TV show Blackadder.

Bald is the name of a man mentioned on one of the manuscript pages: ‘Bald owns this book, which he ordered Cild to write … Nothing is as dear to me as this treasure.’

The new study has been published in the journal Scientific Reports.

Anti-fungal drugs treat fungal infections by killing or stopping the growth of dangerous fungi in the body.

Fungi, like bacteria, can develop antibiotic resistance, when germs like bacteria and fungi develop the ability to defeat the drugs designed to kill them.

Some types of fungi, like Candida auris – a yeast that causes the infection Candidiasis, commonly known as thrush – can become resistant to all three drug types.

Resistance is especially concerning for patients with invasive fungal infections – severe infections that affect the blood, heart, brain, eyes, or other parts of the body.

In other cases, resistance can also develop over time when fungi are exposed to these drugs.

The Centers for Disease Control and Prevention in the US calls anti-fungal resistance ‘a growing threat’.

Further study is needed about links between anti-fungal-resistant infections and agricultural fungicide use on crops, it claims.