’10k steps a day’ has made women fitness tracker prisoners

Every evening before bedtime, teacher Pauline Craven-Lee checks her fitness tracker to see how many steps she’s clocked up during the day.

If it doesn’t say at least 30,000 — roughly 13 miles for her — she’ll put on her trainers and either head out for a walk with the dogs or start jogging up and down her stairs until she has reached that magic number.

She’s even been known to head out into the driving rain or a gale, and admits she would find it hard to fall asleep if she went to bed without hitting her target.

‘I’ve been addicted to step counting since getting a Fitbit three years ago,’ she says.

And while Pauline, 30, is by no means the only one who’s become borderline obsessive about their daily step count — Sex And The City actress Sarah Jessica Parker has apparently been counting her steps for years — two new studies indicate that ‘10,000 steps a day’, a mantra for so many women, may be nothing more than a catchy slogan for companies selling pedometers.

Sadie Nicholas examined the trend for using fitness trackers (pictured) to achieve a minimum of 10,000 steps a day

Walking a minimum of 10,000 steps a day — around four miles — has become the benchmark for adequate physical activity, thanks to fitness trackers such as Fitbits that push users to hit a target now endorsed by the World Health Organisation.

But a study conducted by the Harvard Medical School looked at the step habits of nearly 20,000 women aged 62 and over and found there was no reason for step-count enthusiasts to set themselves such unrealistic targets.

While a 41 per cent reduction in mortality rate for those who averaged 4,400 steps a day was found, the rate improved progressively until hitting 7,500 steps and tapering off.

But no matter, the 10,000 steps ‘holy grail’ is being chased by millions worldwide — with many aiming for higher and higher step counts.

‘From 6.30am, when I took my dogs out for a walk, until 10.30pm, I exercised non-stop, including two gym classes and a long run on the treadmill.

‘But although I was elated, I really paid for it the next day with sore feet and aching hips.’ 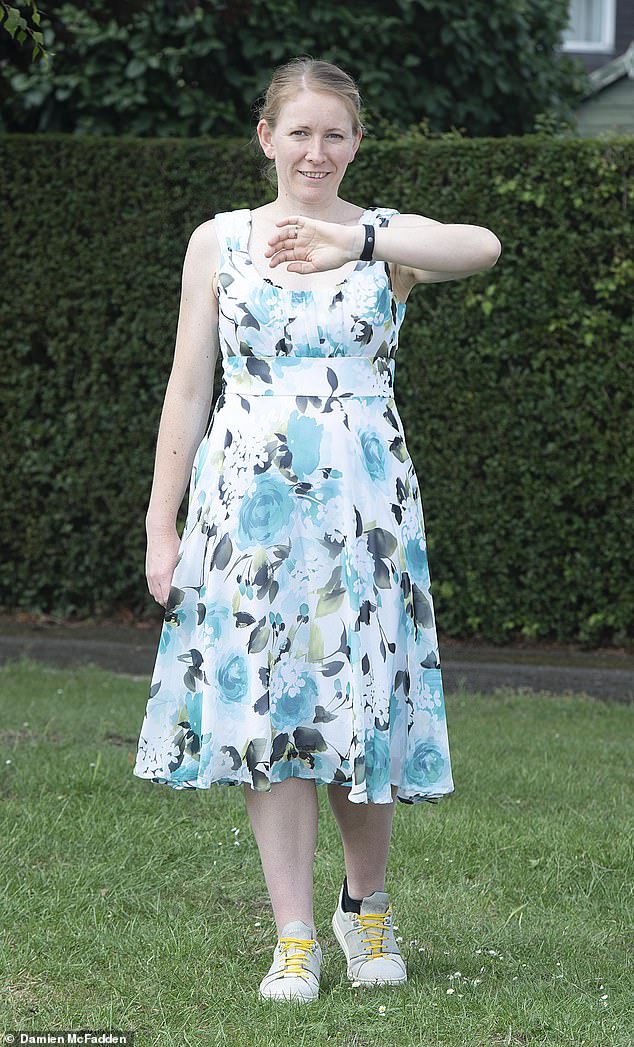 Mary Pearson, 34, (pictured)  from Northamptonshire, who has a Garmin fitness tracker, challenges herself to walk 20,000 steps each day

But it’s not just the idea of hitting a goal that is fuelling users. Trackers can be fiendishly addictive because, as well as giving virtual awards, they allow users to post details of their superior activity levels on social media — something Pauline often does.

Indeed, so ingrained is her habit that she says achieving fewer than 30,000 steps a day is simply unthinkable. Even with all the juggling and restrictions over the past four months, she hasn’t let things slide. Her record step count since the end of March is 58,000.

As well as 14-mile daily walks, pre-lockdown she also did vigorous daily gym classes, which she has tried to replicate online.

‘My daily walks during lockdown helped save my sanity. Nothing deters me,’ she says. But surely such devotion must take its toll on your social life — and make you stressed if you don’t get all your steps in?

David Stensel, professor of exercise metabolism at Loughborough University, agrees that such a habit can affect your state of mind. He notes: ‘With tracking, you can become addicted to exercise which could have some downsides, including isolating yourself socially from friends and family.’ 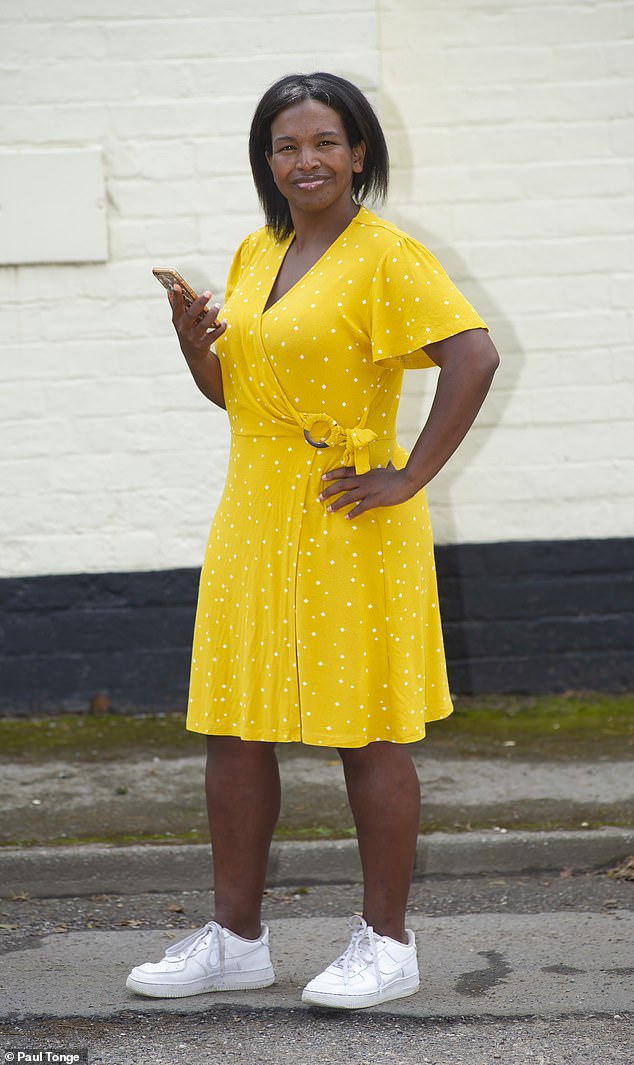 Trina Kavanagh Thomas (pictured) from rural Nottinghamshire, sets herself the goal of walking between 20,000 and 35,000 steps a day

Pauline admits this can be the case, saying: ‘I get anxious if I don’t do enough steps. Prior to lockdown, I often felt added pressure to ensure I got my quota of steps before meeting friends.’

Far from losing weight as a result of her quest for 30,000 steps a day, Pauline says she’s actually gained a few pounds.

‘Losing weight isn’t what motivates me. It has just become a personal challenge that makes me feel good,’ she says.

Exam board moderator Mary Pearson, 34, from Northamptonshire, agrees. For her, hitting 20,000 steps a day is a must.

She and her 30-year-old husband Dan, an IT manager, got rid of one of their cars three years ago to save money, forcing a then pregnant Mary to walk everywhere.

‘I invested in a sophisticated Garmin fitness tracker, determined to stay fit during pregnancy,’ says Mary, who now has a two-year-old son, Oscar, and is an avid long-distance runner. 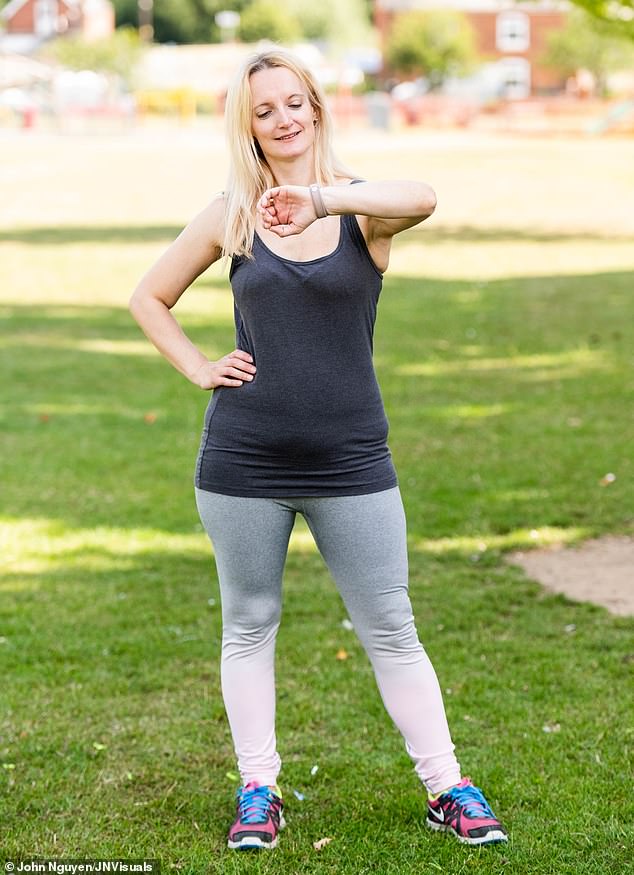 For Mary, 20,000 steps equates to around 15.5 miles according to her tracker — which she checks every hour.

‘If I’m behind, I think of activities to increase my steps, such as taking a walk to the park with Oscar. It’s addictive,’ she says.

But does all this activity place your body under undue strain?

In a new study, scientists at St George’s Hospital in London found that walking for just five minutes extra a day may reduce your risk of a heart attack, diabetes, stroke or broken bones.

But Professor Stensel notes there can be risks if you overdo it, saying: ‘Typical overuse injuries from walking include shin splints, or pain in the hips, knees or feet.’

Regardless, for hours every day, you’ll find Trina Kavanagh Thomas tramping the fields near her village home in rural Nottinghamshire, in pursuit of between 20,000 and 35,000 steps a day — up to 14 miles.

Although now working as a personal trainer and health coach, she previously spent years in a sedentary office job.

‘Now, if I spend too long sitting indoors, I get stressed and agitated,’ says Trina, 38, who’s married with three children. 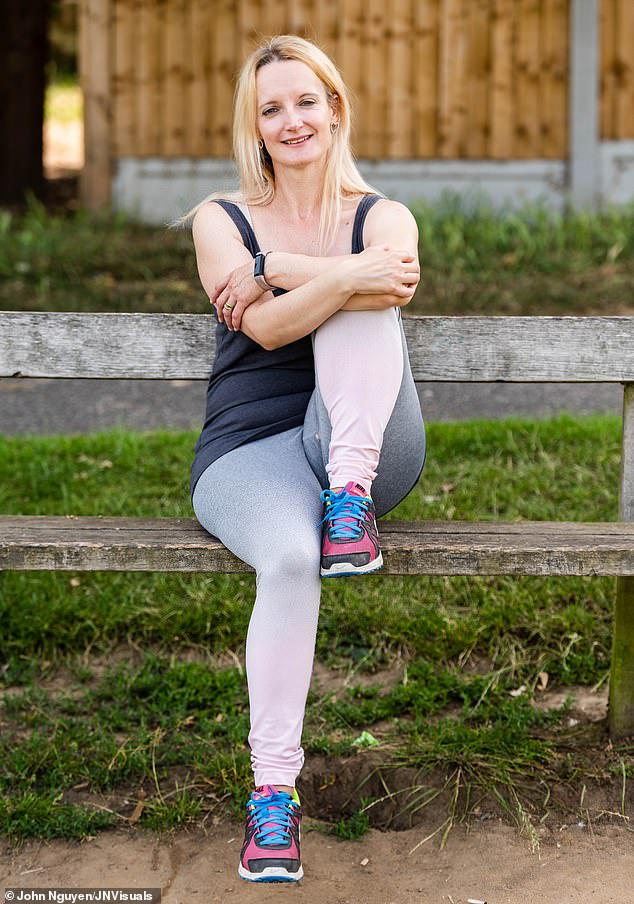 Tracey (pictured) who lives in Chelmsford, Essex, said she can’t imagine ever settling for fewer than 20,000 steps

‘Since I began counting my steps, I’ve lost a stone and I’ve got greater mental clarity, plus my cardiovascular fitness has improved dramatically.’

Tracey Sheppard, 41, a mother-of-two, says she’s become a ‘bit addicted’ to hitting 20,000 steps — around eight miles a day. Over the past four months she’s managed to hit her target, supplementing a shorter daily walk by doing PE with Joe Wicks and playing football and badminton with her children.

Her obsession has led to her losing 2st and dropping two dress sizes since she started tracking her steps 18 months ago.

‘I’d become really lazy until a friend and I made a pact late last year to lose a bit of weight together,’ says Tracey, a part- time cleaner who lives in Chelmsford, Essex, with husband Steve, 36, a taxi driver, and their children Thomas, nine, and Kayleigh, seven.