None of the 100-plus partygoers who caught Omicron at a Norwegian Christmas party believed to be the world’s biggest coronavirus super-spreader event have fallen seriously unwell.

Doctors involved in tracing the outbreak say the infected are so far only suffering very mild symptoms like fevers, coughs, headaches and tiredness following the festive do on November 26.

Some 120 people who attended the Louise Restaurant and Bar in Oslo have tested positive for Covid, all of which are suspected to be Omicron but only 13 have been confirmed in a lab.

Seventy of the infected were employees of solar power company Scatec, who were celebrating their Christmas work night out, while the remaining 50 were other guests at the restaurant. The party was held in a closed room but guests reportedly mingled with other people in the restaurant after 10:30pm, when it turned into a nightclub.

The Oslo outbreak made international headlines and was the first warning sign to Europe that the highly-evolved variant was viciously virulent and could outpace Delta on the continent.

But Dr Tine Ravlo, a public health expert in the Norwegian capital involved in tracking the outbreak, said that so far ‘none have become severely ill and none of them have been treated in hospital’.

The development lends weight to the theory that Omicron might be weaker than past variants, and is consistent with reports from doctors in ground zero of the outbreak in South Africa.

Norway’s state epidemiologist, Frode Forland, told The Telegraph that if this turns out to be true, it could signal the beginning of the end of the pandemic.

‘That is the hope. That is the best scenario we can have,’ he said. ‘That it’s getting minder, most people will get it, and they will get a natural immunity.’

Scientists have long predicted the coronavirus is unlikely to ever be eradicated but will instead transition into a milder cold-like virus as the world develops stronger immunity.

Dr Angelique Coetzee, chair of the South African Medical Association and the first person to spot the new variant in a patient, said her patients infected with Omicron reported different and much milder symptoms, including tiredness, muscle aches, a sore head and a dry cough. But none reported the tell-tale symptoms of a loss of smell or taste or breathing difficulties 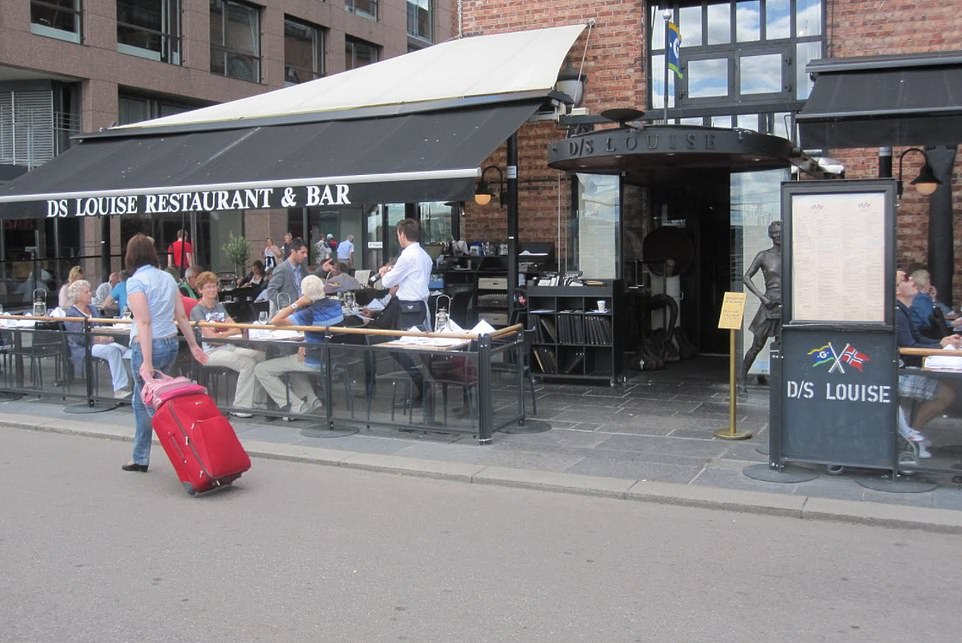 Some 120 people who attended the Louise Restaurant and Bar in Oslo on Nov 26 (pictured) have tested positive for Covid, the majority of which are suspected to be Omicron but only 13 have been confirmed in a lab 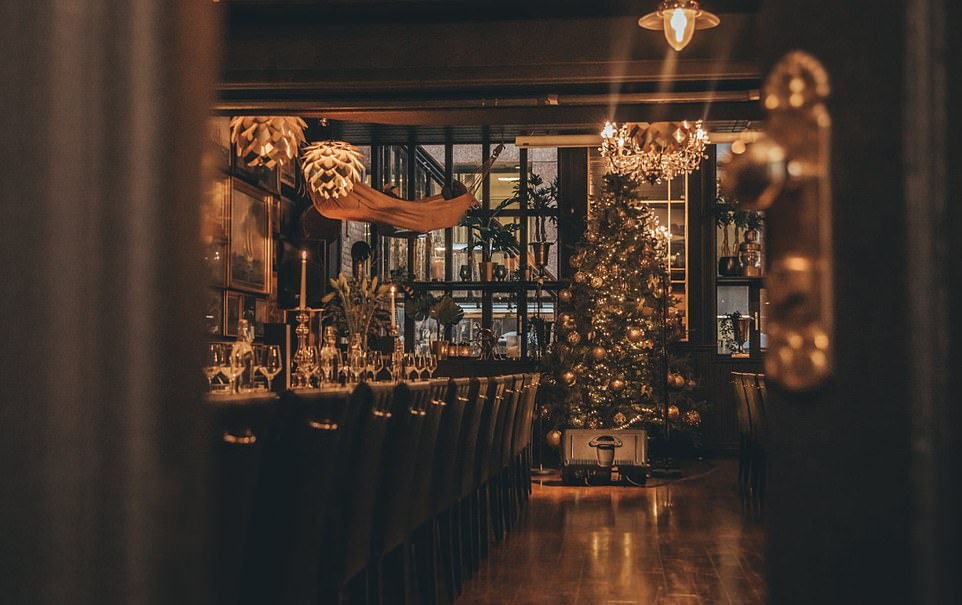 The Christmas party was held in a closed room but the guests reportedly mingled with other people in the restaurant after 10:30pm, when it turned into a nightclub (pictured, inside Louise Restaurant & Bar)

Jabs should hold up against Omicron, study

Existing Covid jabs and prior infection should still protect people against severe illness from the Omicron super variant, according to a study hailed by one of No10’s top health chiefs.

The promising research found that while the new strain has more than triple the micro-mutations as Delta, there are still large swathes of the virus that remain vulnerable immune system.

Italian researchers ran Omicron’s unprecedented number of spike protein alterations through a mathematical model to gauge how well the virus will be recognised by the body.

They found that about 70 per cent of the spike had not evolved to evade vaccines or natural immunity and in theory will still be targeted by the immune system of a vaccinated or recently-infected person.

Dr Susan Hopkins, chief medical adviser at the UK Health Security Agency and key No10 advisor, said the finding signalled a ‘glass half full’ scenario, with the variant unlikely to make jabs redundant like previously feared.

But the immunologist expressed some concern that Omicron has three times more alterations to parts of the virus that are targeted by antibodies and T cells, known as epitopes, compared to any other variant.

The University of Milan study is ‘helpful but in no way definitive’ because it does not tell us how Omicron is ‘going to act in the real world’, according to Professor Lawrence Young, a virologist at Warwick University.

Scientists won’t know the full scale of Omicron’s infectiousness, vaccine evasiveness or lethality for another two weeks, when they can isolate the virus in a lab, study its biology and test it against vaccines.

‘It tells us we’re likely to get an immune response, either through vaccination or previous infection, but how much? We’re still not sure,’ Professor Young added.

Dr Simon Clarke, a microbiologist at Reading University, also warned against reading too much into the findings, telling MailOnline: ‘The big questions is which are the important epitopes? We don’t know this yet and not all epitopes are created equal.

‘We are crossing our fingers that the antibodies stimulated by the vaccine bind to and block the epitopes on the virus’ spike protein, which acts like a key to our cells.’

MailOnline reported last week that the Oslo outbreak was only causing mild illness but doctors cautioned that it could take up to a fortnight for patients to fall severely ill.

But there is a growing sense of optimism 11 days removed from the event with no sign of their conditions worsening.

Professor Forland, director of infectious diseases at the Norwegian Institute of Public Health, told The Telegraph: ‘It might be that it has now replicated and mutated so many times that this is the optimal position from the virus’ point of view, to spread widely and not kill the hosts.

‘That’s what we’ve seen with other diseases beforehand. And of course, then it gets into more like an endemic phase.’

However, all of the infected are believed to be relatively young and most will be vaccinated – a combination that typically leads to milder symptoms.

And experts told MailOnline that even if the new strain is milder, if it can infect significantly more people than Delta then it will cause bigger surges in hospital admissions than its predecessor.

The Oslo outbreak – currently the world’s largest-known Omicron outbreak – happened after two employees who recently travelled to Scatec’s head office in Cape Town attended the party, one of which was believed to have brought the virus back with them.

Scatec has insisted only vaccinated employees were allowed to attend the party and they needed a negative test result beforehand.

Only 13 of the cases have so far been confirmed as Omicron using genetic sequencing techniques, with dozens sent away to be confirmed in a laboratory. All of the cases are assumed to be the new variant.

Around 50 of the infections were not attending the Scatec party – which was held in a private room – but were in the wider restaurant and became infected when the party broke up and began mingling with other guests around 10.30pm.

Scientists have theorised that the ‘incubation period’ of the new variant – the time from infection to first symptoms – appears to be two to four days.

That is far less than the seven to 14 days for most other Covid variants and may explain why it is spreading so quickly in the epicentre in South Africa.

Real-world data suggests the highly-evolved variant is three-and-a-half times more likely to infect people than Delta because of its combination of vaccine resistance, increased infectiousness and antibody escape.

There has been a meteoric rise in Covid infections in South Africa in the fortnight since it alerted the world to Omicron’s existence on November 24.

Scientists won’t know the full scale of Omicron’s infectiousness, vaccine evasiveness or lethality for another two weeks, when they can isolate the virus in a lab, study its biology and test it against vaccines.

Scientists are concerned about the sheer number of mutations on its spike protein, which vaccines were designed to target.

They were developed to recognise the original strain of the virus that emerged in China, which has made them slightly less effective with every new strain.

However, while the jabs have become less good at preventing infection, the impact on protection against severe illness has held up even against variants like Delta.

Omicron has 37 mutations on the spike alone compared to Delta’s nine and the 10 found on Beta, which used to be regarded as the most vaccine-resistant strain.