Salmonella from ground beef has sickened another 63 Americans, bringing the total illnesses linked to the bacteria to 120, the CDC revealed last night.

About 6.5 million pounds of the meat have been recalled as a result of the outbreak, which is now affecting people in 22 states.

The latest illnesses come as the CDC issues parallel warnings about salmonella in raw chicken as well as people’s pet chickens.

And listeria infections have been traced to deli meat in the US, meaning that Americans must be on high alert when buying just about any protein.

Another 63 people have been sickened by salmonella linked to ground beef sold in stores like Walmart in 22 US states, bringing the total number of illnesses to 120, the CDC has announced

People were falling sick with salmonella in 16 states across the US throughout August.

This week, six states were added to the list of affected areas. There are new cases of salmonella in Texas, Hawaii, New Mexico, Oklahoma, Kansas and Washington.

Us health officials have found a link between the disparate cases: eight patients in distinct hospitals had receipts showing they’d all bought beef produced by JBS Tolleson, Inc, produced and packaged in Arizona.

Now, illnesses have been reported in 22 states. 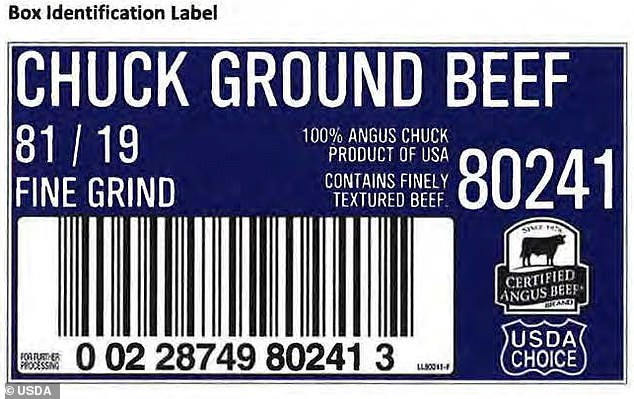 This is one of the ground beef labels to look out for, health officials said

All of the packages featured the USDA inspection number EST. 267.

The CDC warns the recall has not been finalized and customers should still watch out for symptoms of infection, and get rid of any beef with that number on it.

Salmonella is a common infection from contaminated food. People who consume it can be left with diarrhea, fever, and cramps.

If the diarrhea is particularly severe or persists for days, the diner may need hospital care.

So far, infections have landed 33 of the 120 sick people in the hospital.

No deaths have been reported, but the CDC continues to closely monitor the outbreak.