Turkish officials have begun the process of flooding a 12,000-year-old town to make way for a dam project to power the region.

Hasankeyf, possibly one the of the oldest sites of human settlement, will start to become an artificial lake as water journeys down the Tigris river.

Authorities on the Ilısu hydroelectric dam project have started to fill the dam with water, at another stage of the river, 50 miles away. The town is in the south-east of the country in an area often referred to as Turkish Kurdistan due to the large Kurdish population.

It once housed a 12th Century bridge, a 15th Century pillar tomb, two dilapidated mosques and hundreds of natural mountain caves and was home to thousands of residents. The caves in the ancient city have survived as homes since the Neolithic era with some locals still using them as dwellings today. Marks have been left on the town by all civillisations that ruled the region, including the Mesopotamians, Romans and Ottomans.

Most of the artefacts, including a tomb, were moved last month to a location called New Hasankeyf and the townspeople are expected to follow by mid-October.

The decision, confirmed by the regional governor, Hulusi Sahin, at a meeting on Saturday, ignores decades’ long resistance from campaigners and residents.

Newly married Mehmet, centre, and his wife Sultan, right, can be seen enjoying tea next to the Tigris river in southeastern Turkey, on August 17, 2019. The planned reservoir will completely or partially flood 199 villages and the homes of 78,000 people and a further 3,000 nomadic families. The dam, which is further downstream, has started to be filled 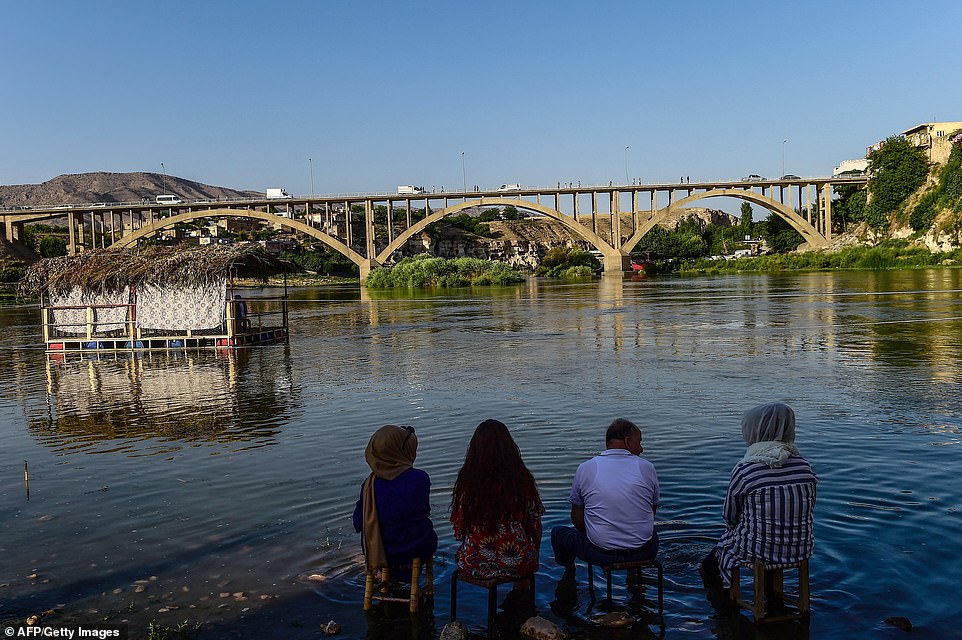 People can be seen here sitting on chairs in the Tigris which runs through the historical city of Hasankeyf. The inauguration of Turkey’s controversial Ilisu dam on the Tigris River is likely to compound water shortages in neighbouring Iraq 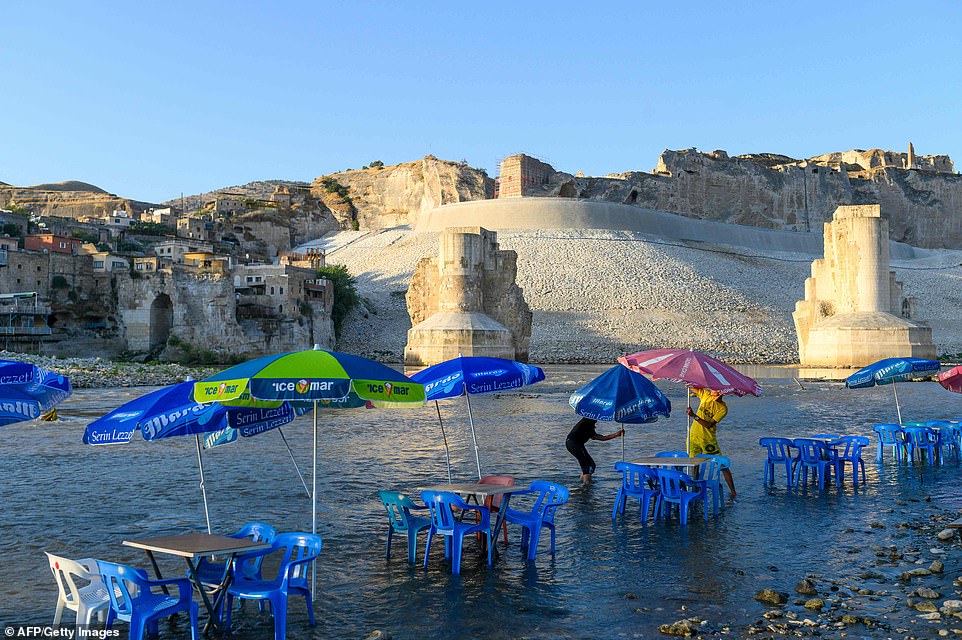 Boys can be seen opening parasols next to the newly built stone wall in Hasankeyf in August this year. This settlement, which will be flooded by next month, was a former trading post along the Silk Road and has seen Romans, Byzantines, Turkic tribes and Ottomans leave their mark there 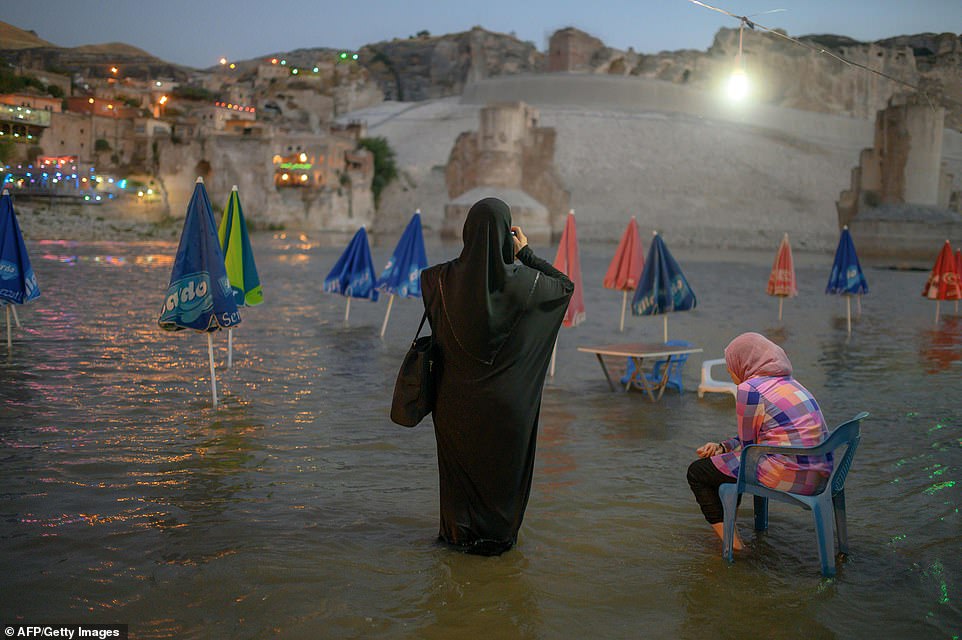 A woman takes a picture of the 12,000 year old ancient city of Hasankeyf, on the banks of the Tigris, in southeastern Turkey on August 17, 2019. Though the new wall stands, most of the ancient artefacts have already been moved to the new town 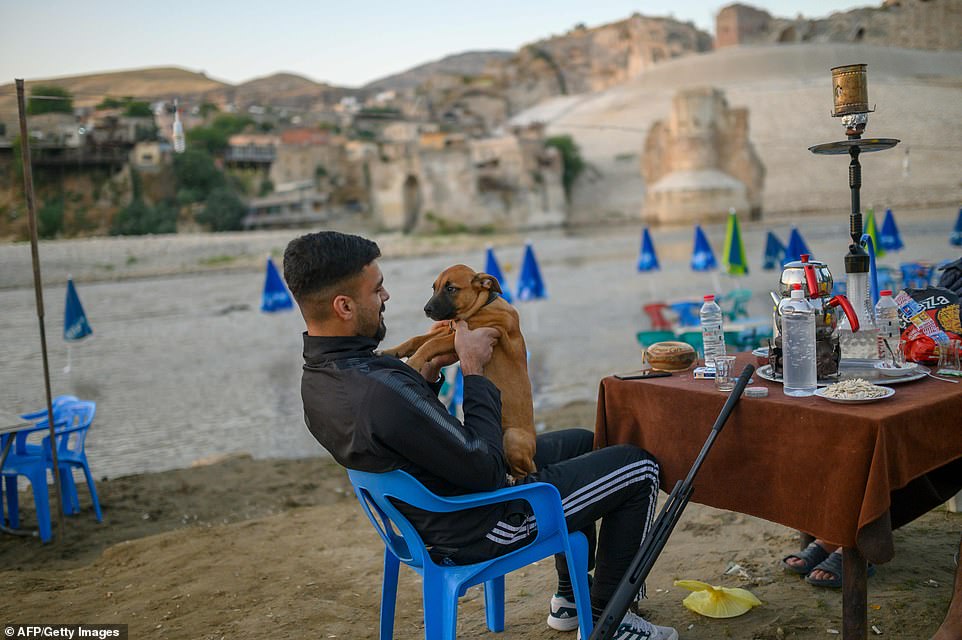 Devran Tunc, 28, owner of a coffee shop next to the Tigris River in the city centre, plays with his dog in Hasankeyf, in southeastern Turkey, on August 17, 2019. The area where Devran sat with his dog for the photograph last month will be completely underwater by this time next month. Families who have been in the town for centuries will have to move away 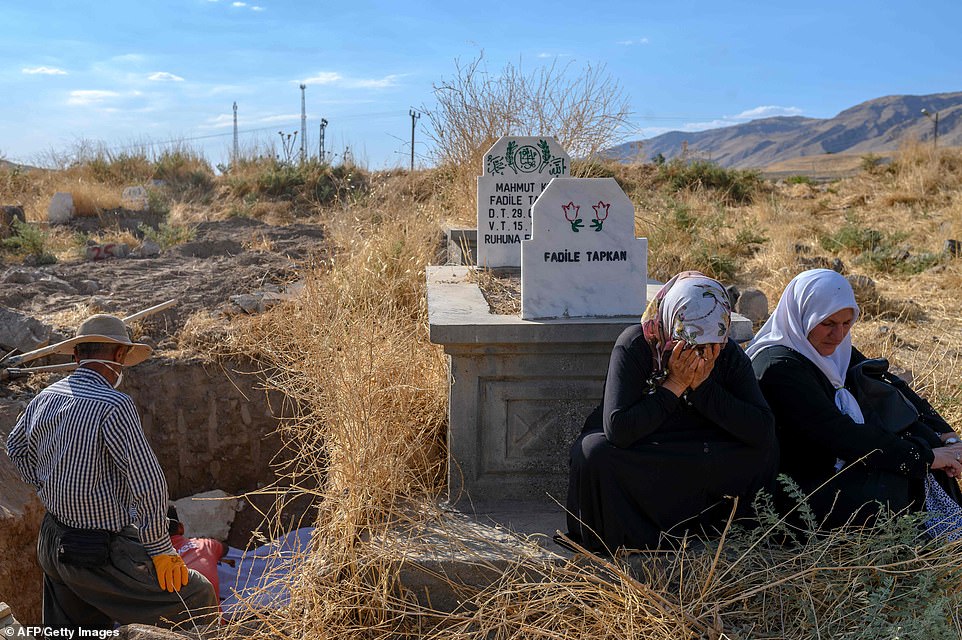 55-year-old Hacire Yalcin, pictured right, sits next to her sister-in-law in the middle of the Hasankeyf cemetery earlier this month. The graveyard is perched on the banks of the Tigris river so all corpses must be exhumed and transported to New Hasankeyf cemetery nearby 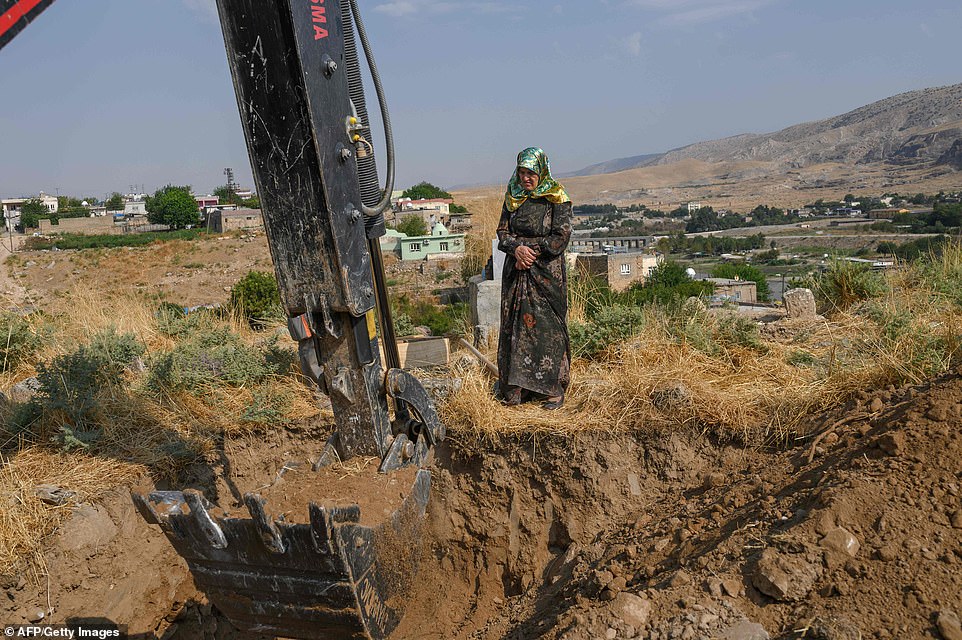 Hanife Ekinci, 55-years-old, waits next the grave of her father-in-law as a digger works to uncover the body which will be moved to the new Hasankeyf cemetery on September 15, 2019. The planned dam will drown the entirety of the town which has been inhabited in some way for 12,000 years

He said the site will be cordoned off on 8 October, leaving residents just over a month to relocate before the flooding starts.

‘Entry and exit will not be allowed,’ Sahin said.

‘Time is running out, we all have our duties.’

The town will be submerged as part of the Ilisu Dam project which, according to Turkey’s Foreign Ministry, will provide power to the region and have several economic and environmental benefits.

The dam was first dreamt up as a solution to the area’s need for power and to irrigate the surrounding agricultural land in the 1950s but failed to gain traction until 2006.

The dam and accompanying power plant will be capable of producing the same amount of electricity as a small nuclear plant. 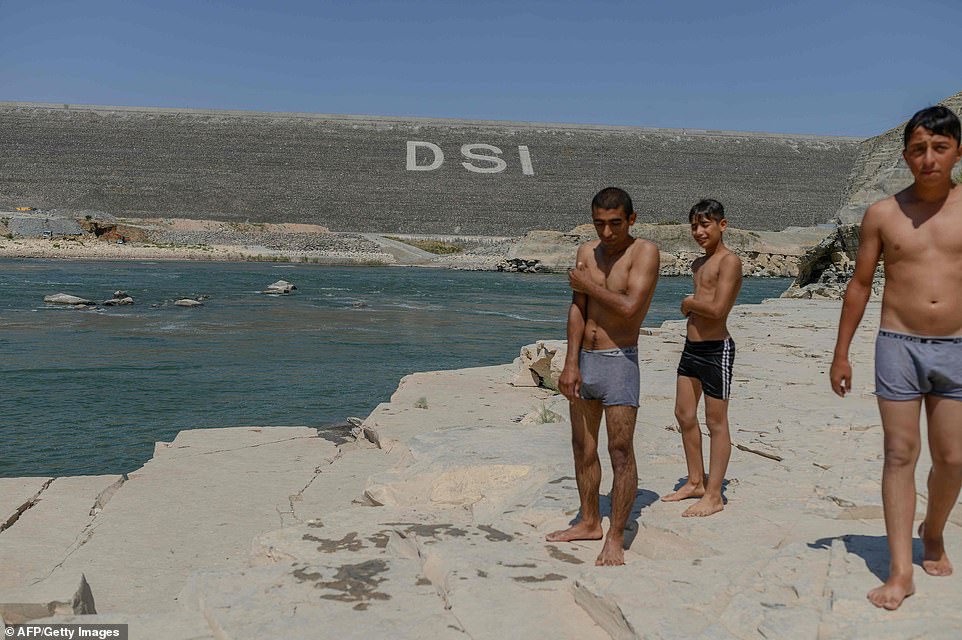 Young Kurdish boys can be seen playing in front of the Ilisu dam itself, 50 miles southeast of the historic city. The dam near Mardin city is beginning to be filled and Hasankeyf will be underwater by mid October 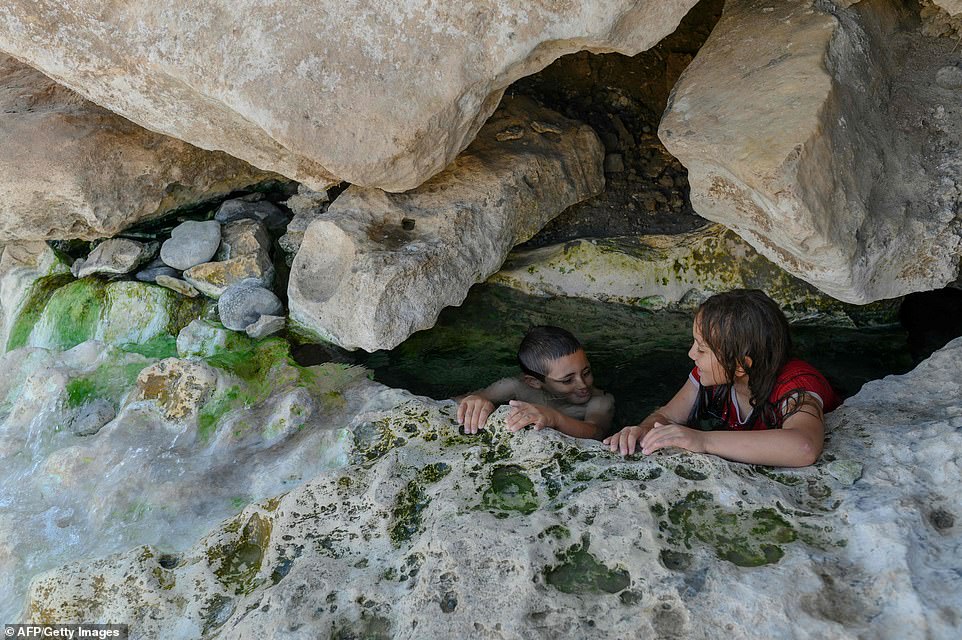 Muhammed (left) and Hasret (right) enjoy a hot spring water dip in the Botan valley just a few miles away from the new dam. Lawmakers and activists have said that Turkish officials have started filling the nearby dam that will see ancient town Hasankeyf drown 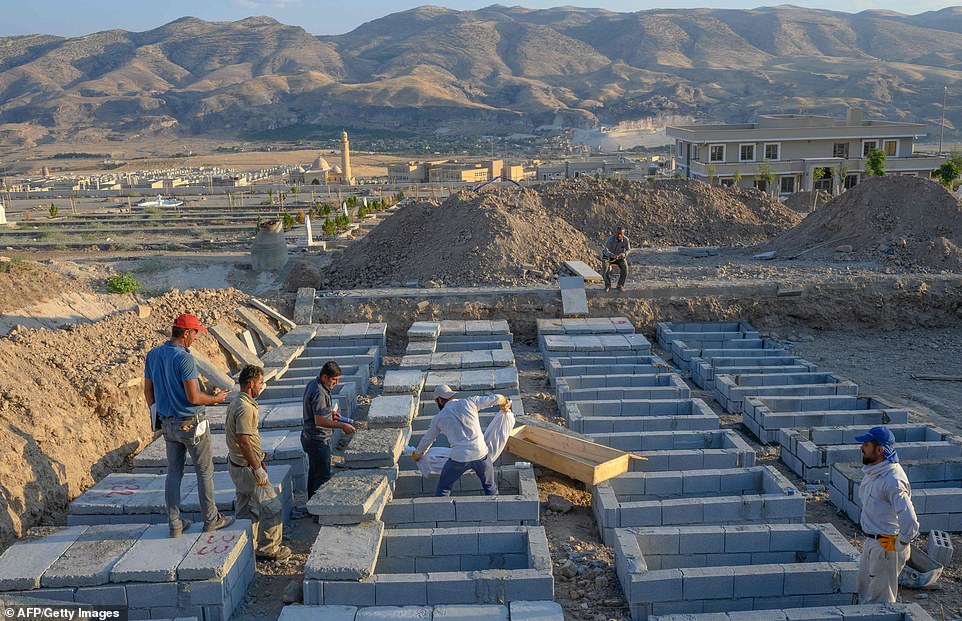 Workers carry a corpse in the new Hasankeyf cemetery after they transferred it from the old Hasankeyf on September 12, 2019 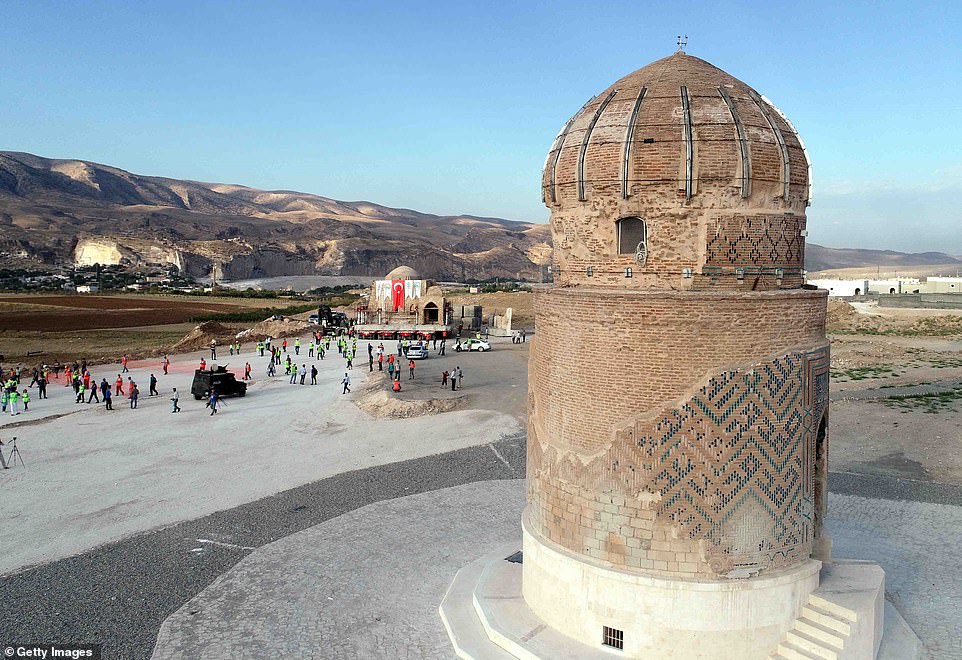 The shrine of Imam Abdullah Zawiya (pictured left in the distance) can be seen during the transportation process to ensure it isn’t damaged when Turkish officials flood the town of Hasankeyf in Batman, Turkey. The cylindrical Zeynel Bey Tomb (pictured front right) was also relocated to a new site to prevent any flood damage 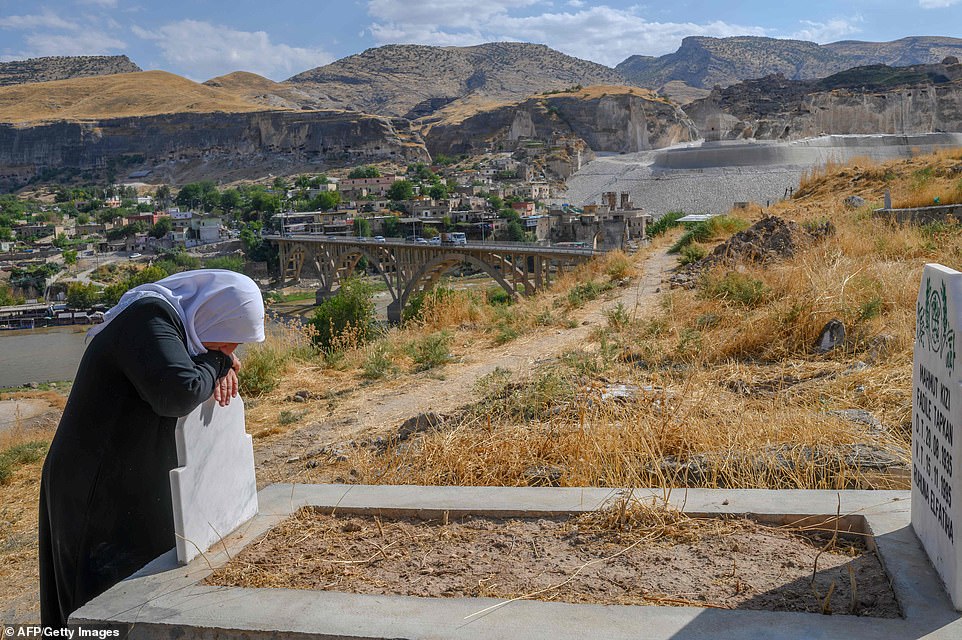 Hacire Yalcin, 55-years-old cries at the grave of her sister Fadile’s as she waits for her sister’s grave to be transfered to new Hasankeyf cemetery on September 13, 2019. New Hasankeyf is a town with 710 houses for those who have been displaced 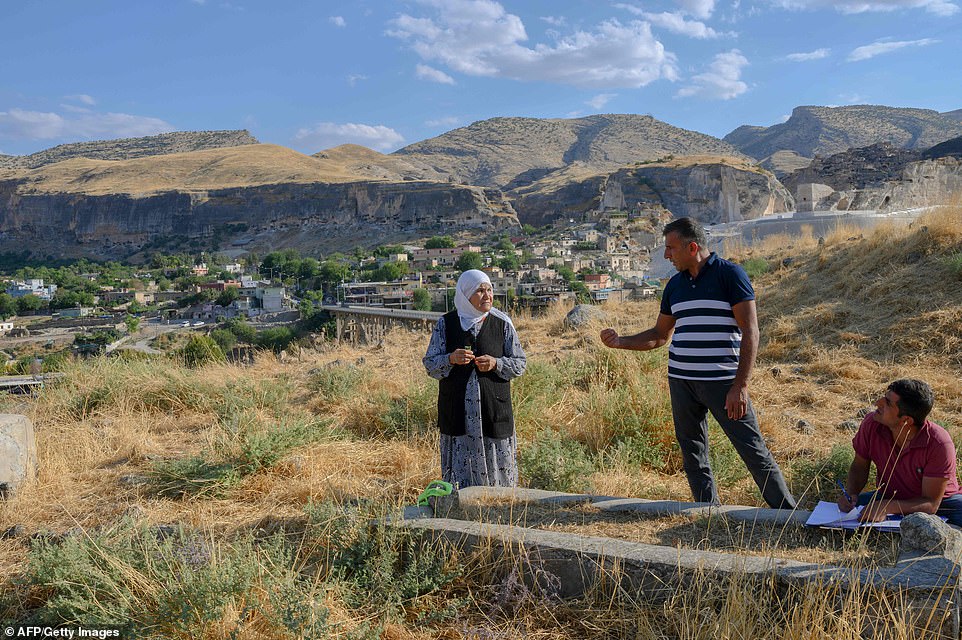 Many countries removed their support for the Ilisu Dam, including the UK back in 2001 and in 2008, numerous European firms withdrew their funding from the controversial project. A man tries to convince an old Kurdish lady to accept the removal of a grave to from the old cemetery to the new Hasankeyf cemetery

Though the government has built a new town with 710 houses for those displaced, residents aren’t happy about the forced relocation.

Local resident, Firat Argun, told CBSNews  that his family has lived in the area for 300 years.

‘We were living with hope but we lost that now. They gave us three to five months,’ he said.

‘I need to start all over again. I feel like I have just arrived in this world. I don’t know if it is going to be good or bad.’ 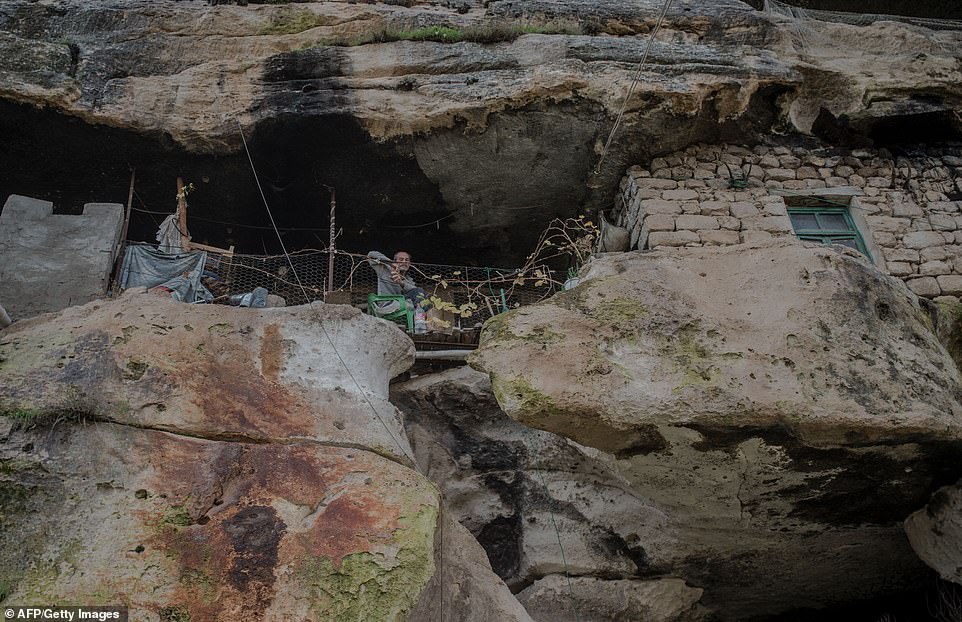 The historical caves overlooking the Hasankeyf valley (pictured above) are still used as dwellings today and a man can be seen above peering over his fence. The caves were originally used as homes in the Neolithic era 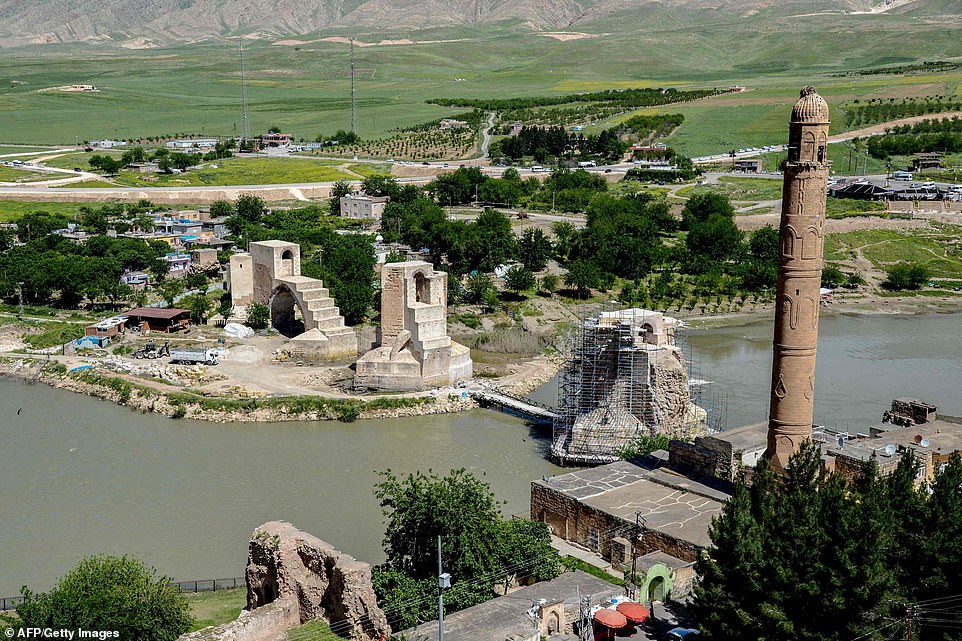 In this photo taken on May 12, 2017 shows a general view of Hasankeyf bridge across the Tigris River in the Hasankeyf district in Batman 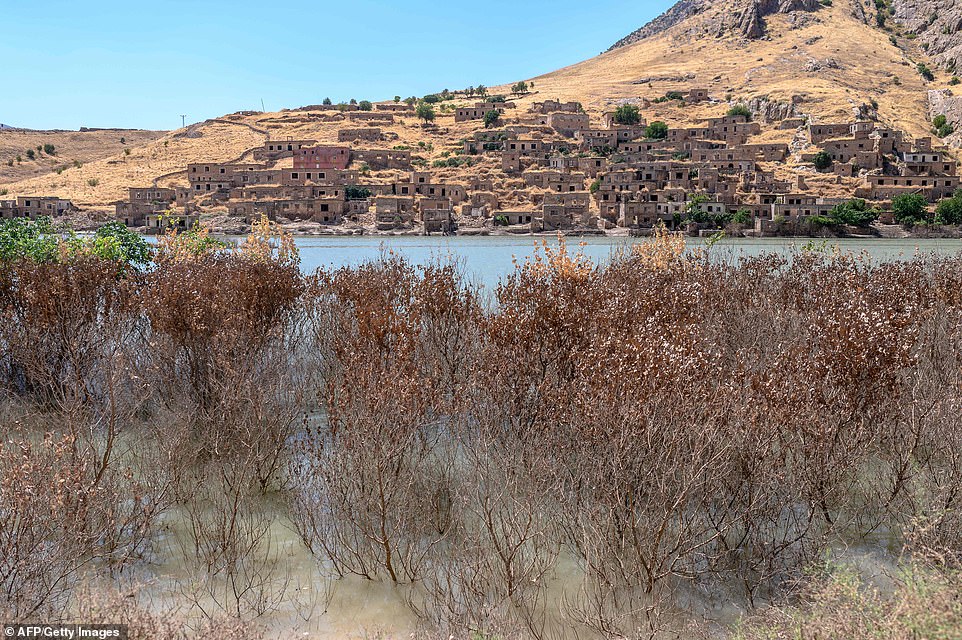 This photo shows another town in Turkey’s south-east that was invaded with water like Hasankeyf will be come mid-October. Despite decade long protests to stop the flooding, Turkish authorities have begun the process 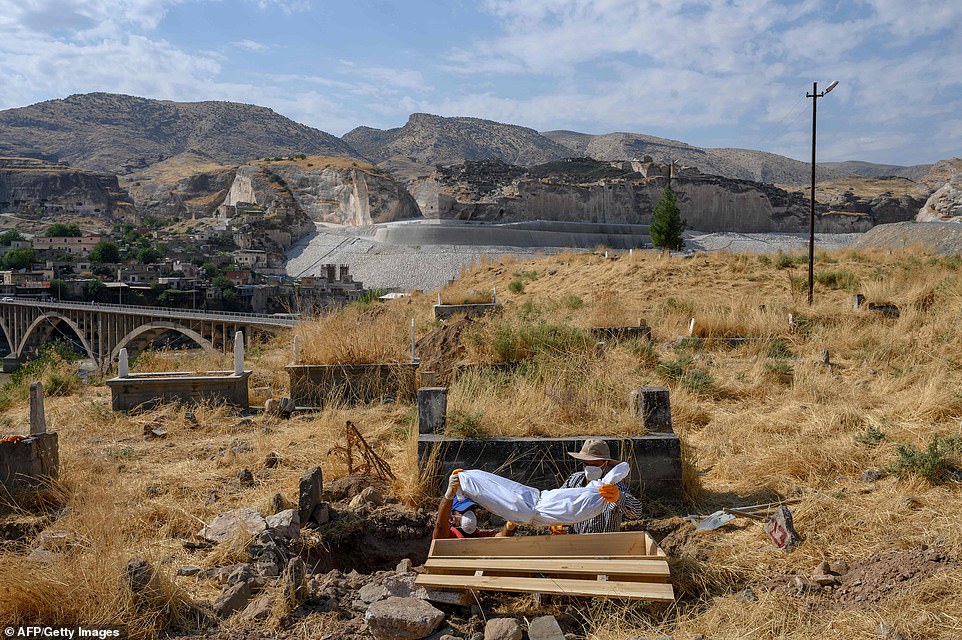 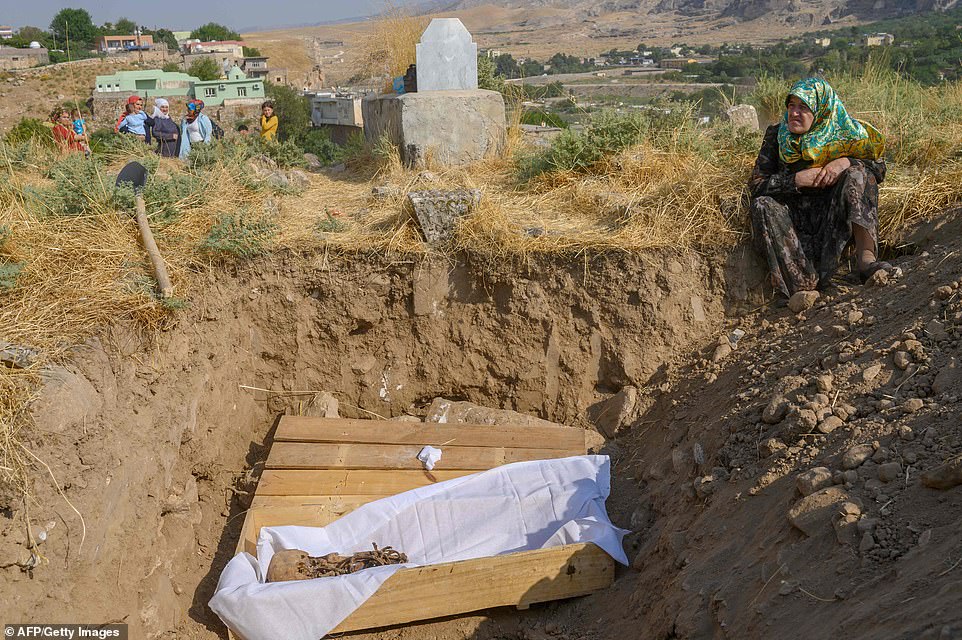 Hanife Ekinci, 55-years-old, waits next to her father-in-laws’ grave which will be moved to the new Hasankeyf cemetrery before the waters flood the area of the old Hasankeyf cemetery on September 15, 2019 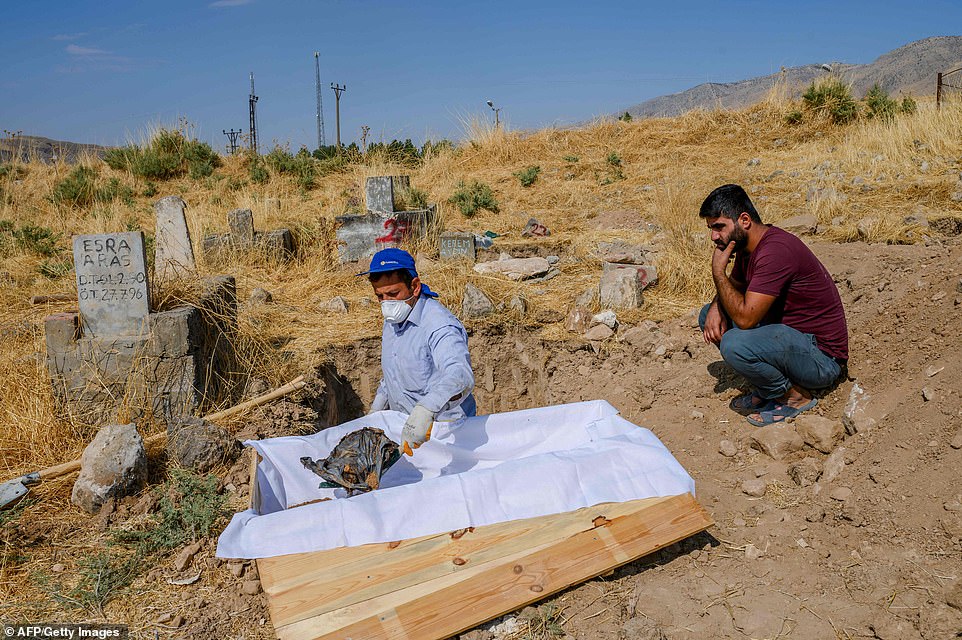 A worker holds the covered head of a corpse of a 15-year-old boy who died in 1997 in an accident in Hasankeyf as his 28-year-old brother Fatih (R) looks on, as they ready to transport it from the old cemetery to new one on September 13, 2019. The dam was first dreamt up as a solution to the area’s need for power and to irrigate the surrounding agricultural land in the 1950s but failed to gain traction until 2006. 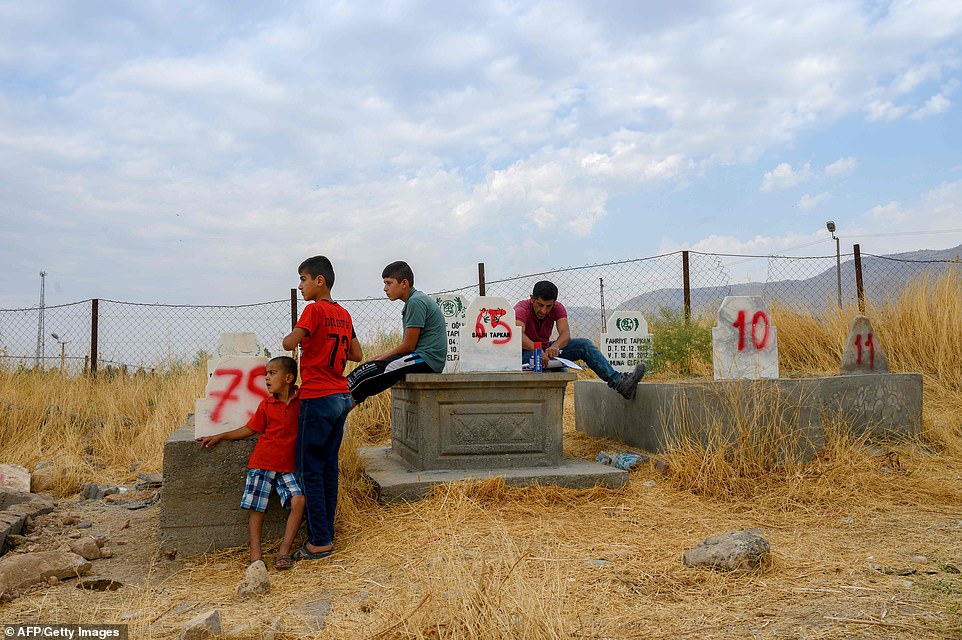 Yunus (2nd-L) stands with his younger brother (L) as they wait for workers to show them the grave of their younger baby brother who died in 2016, during transfer of the graves to the new Hasankeyf on September 15, 2019 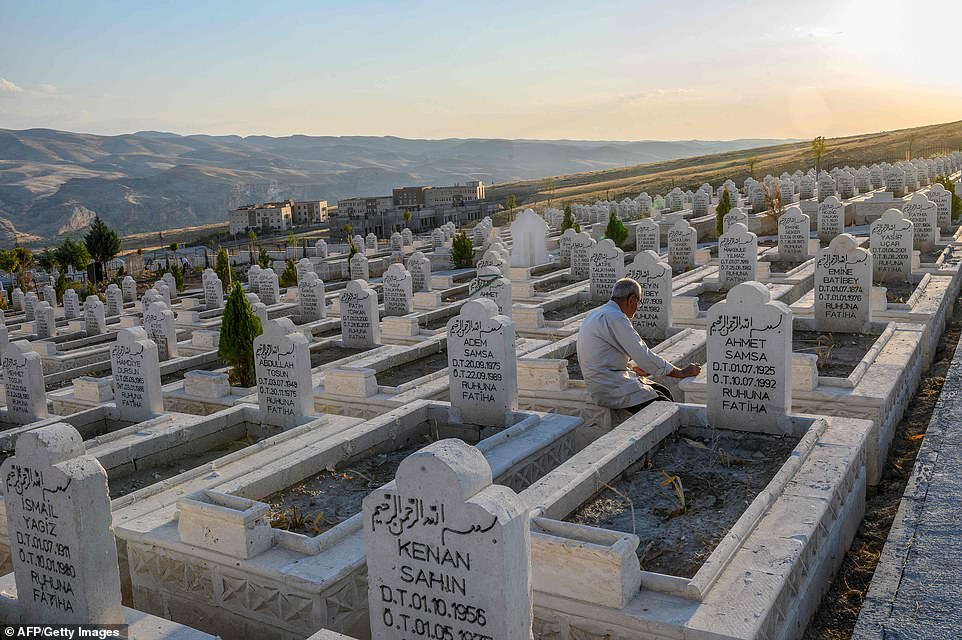 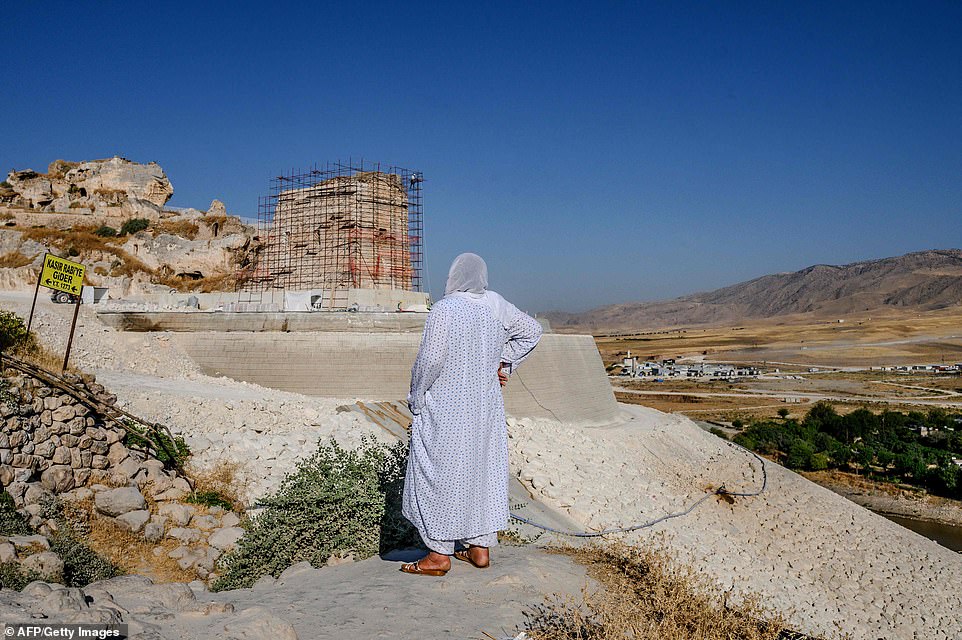 An elderly woman can be seen looking up at the newly built stone wall near the 12,000-year-old city of Hasankeyf in Turkey

The new town will house the old artifacts at a museum and hopes to draw archaeology enthusiasts there.

The dam plans have brought together 86 local and national organisations under the banner of the Initiative to Keep Hasankeyf Alive but with the governor’s recent comments, it appears their solidarity may have been in vein.

Many countries removed their support for the Ilisu Dam, including the UK back in 2001 and in 2008, numerous European firms withdrew their funding from the controversial project. 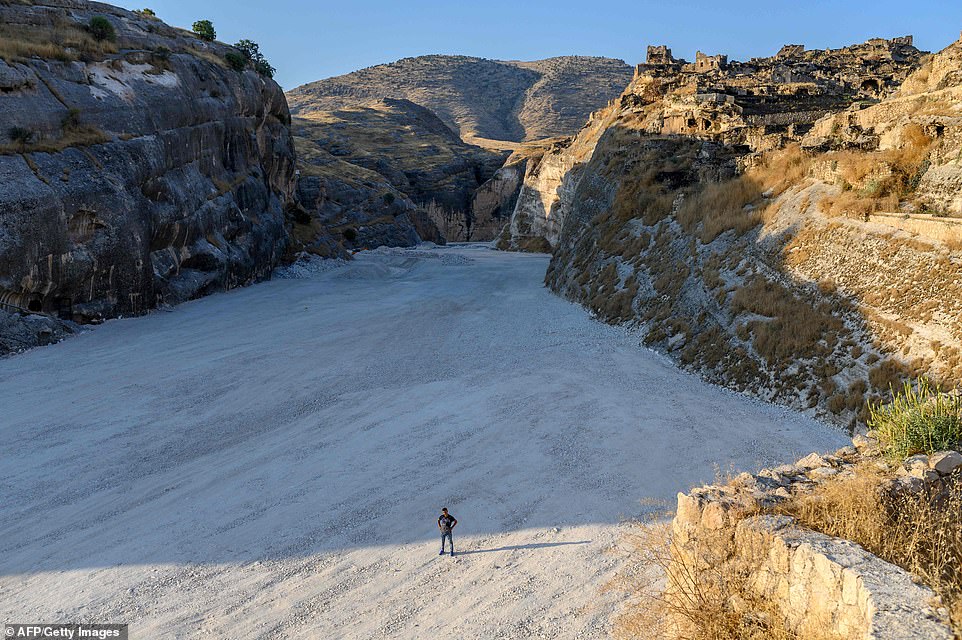 Cetin Yildirimer, known as Mazlum, a 28-years-old tourists guide, stands in the middle of the disappered ancient town of Hasankeyf at sunrise, on the banks of the Tigris in southeastern Turkey, on August 19, 2019 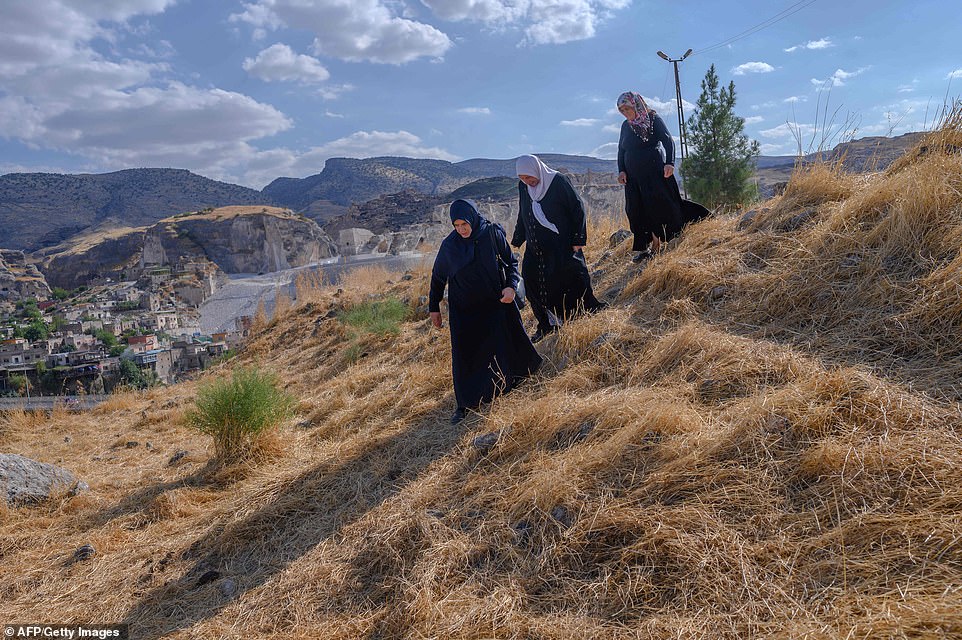 Hacire Yalcin (C), 55-years-old walks with her sister and her sister in-law (R) in the middle of old Hasankeyf cemetery as they search for one of their relatives’ graves which will be moved to the new Hasankeyf cemetery, on the banks of the Tigris in southeastern Turkey on September 13, 2019