Florida beachgoers were in for a surprise when they spotted a hammerhead shark swimming close to the shore.

Photos shared on Navarre Beach Fire-Rescue’s Facebook page show the 13-foot creature just a hundred feet away from people on the beach.

In one of the photos, a blonde woman in bikini looks to her left as the shark’s dorsal fin peeks out of the water.

And in a video shared on YouTube, a crowd of between 40 and 50 people could be seen watching from the shoreline.

Social media users were quick to notice that the beach was the filming location of Steven Spielberg’s 1978 sequel Jaws II. 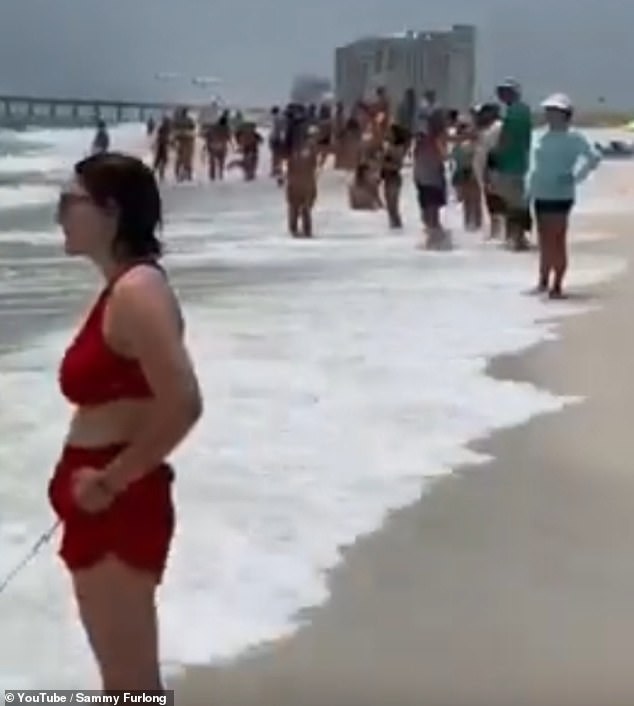 Video shared on YouTube showed a crowd of about 40 to 50 people, both kids and adults, watching from the shoreline

The Facebook post had about 900 reactions was shared more than 5,100 times. Social media users expressed both awe and fear at the sight.

‘Amazing to see!! I would love to see his whole body in the water,’ one Facebook user wrote.

‘I am so glad we didn’t go to the beach,’ wrote another. ‘If not, my daughter would have NEVER GONE to a beach [again].’

Navarre resident Christina Reinholt shared video of the hammerhead swimming in a pool of blood after allegedly killing a fish known as a tarpon.

‘Lifeguards evacuated the water and some beach goers [sic] got the experience of a freaking lifetime,’ she wrote in the Facebook post.

According to the International Shark Attack File, run by the Florida Museum, there have been just 17 recorded hammerhead shark attacks on humans. 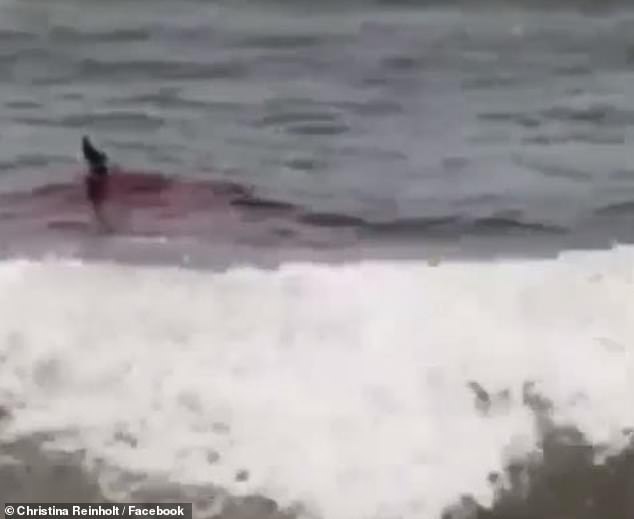 In one video, the shark is seen in a pool of blood after allegedly killing a fish known as a tarpon 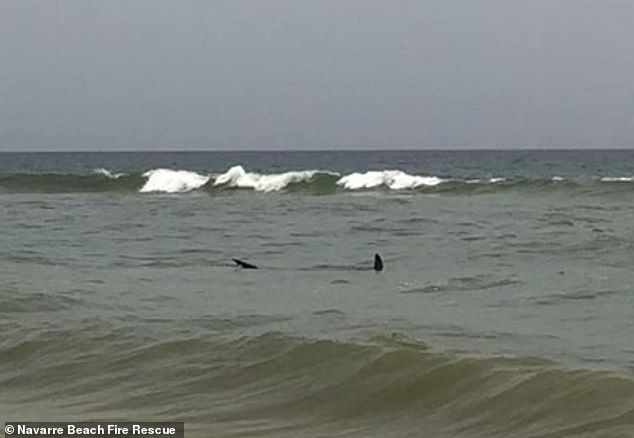 Photos shared on Navarre Beach Fire-Rescue’s Facebook page were shared more than 5,100 times, garnering reactions of both awe and fear

None of the attacks have resulted in a fatality, however.

National Geographic reports that there are an average of 16 shark attacks in the US each year and about one fatality from such an attack, every two years.

That means you have a greater chance of being fatally struck by lightning than being killed by a shark.