13-year-old boys arrested in Colorado had a ‘kill list’

A pair of 13-year-old boys from Colorado who allegedly constructed a ‘kill list’ targeting teachers and staff at their school were ‘infatuated’ with the Columbine High School shooters and wanted to honor them.

The suspects adopted the Columbine killers’ nicknames ‘Rebel’ and ‘Vodka’ and even planned on buying similar clothing ahead of an attack.

The disturbing information was revealed at a court hearing Thursday in which both teens remain under detention.

A pair of 13-year-old boys had specific targets at Sabin Middle School and were testing their plan. They were arrested after plot to target people at school was revealed

Law enforcement officials say that the investigation was initially prompted by ‘suspicious circumstances’ at the school.

The police say they were tipped off to the alleged scheme after a parent relayed details of a conversation someone overheard in school.

Earlier this month it was found the pair had created a ‘kill list’ threatening to ‘punish’ many classmates and teachers, and had been ‘testing bombs.’ 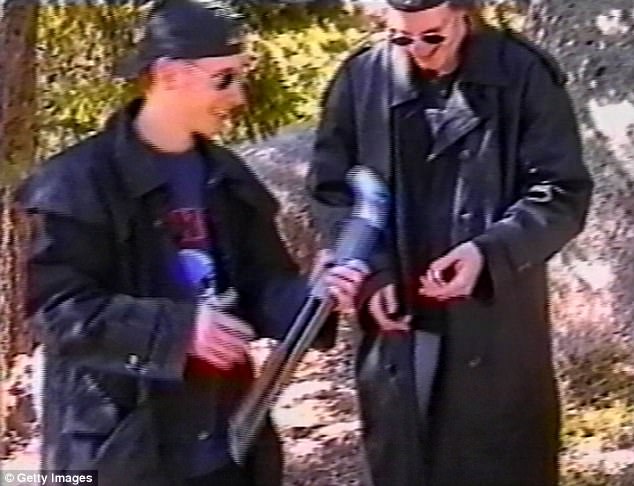 It has since been revealed the pair had a ‘kill list’ targeting teachers and classmates in ‘a plot that honored Columbine shooters, pictured

Lt. Howard Black said that the boys constructed a ‘kill list’ targeting individuals such as school faculty and classmates, and later discovered text messages on their phones discussing ways to carry out the threats.

The teens had specific targets, a specific way of tracking those targets and were testing their plan when they were discovered.

‘That was their terminology that they used in identifying some individuals that they wanted to punish,’ Black said during a press conference at the time of their arrest.

The teens, who have not been named because they are juveniles, are accused of inciting destruction of life or property and conspiracy.

Guns were discovered as part of searches conducted during the investigation. 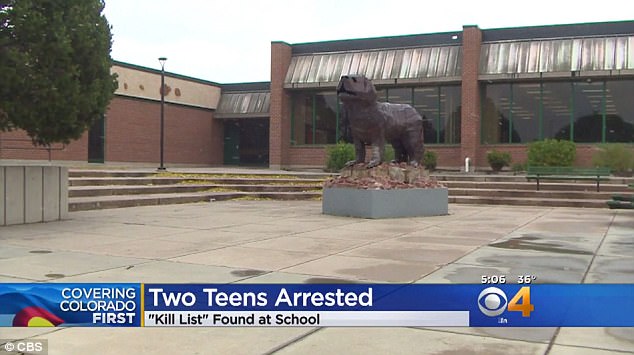 The seized weapons include a pistol turned over by one boy’s mother and several weapons that the other boy’s father kept in a safe.

Prosecutors have indicated they’re pursuing charging the teens with conspiracy to commit murder and have filed to try them as adults.

Public defender Laura Nafziger said the boys were picked on at school and had no actual intentions of committing violence.

She said the boys were engaged in a harmless fantasy. ‘These are two kids who were bullied and who have vivid imaginations,’ she said, arguing there was no evidence the boys took steps to carry out the plot.

Prosecutors disagreed saying a video was found on one of the boys’ phones showing someone tossing a Molotov cocktail into a drainage ditch, and the device goes off.