Two 13-year-old boys have been hailed as heroes for helping a ‘shaking’ elderly man cross a busy street.

Blake Ockleston and Daniel Coyle-Smith spotted the frail man struggling with his walker at a Clark Street double crossing in New Lynn in Auckland’s west on Saturday.

The pair held onto the man and even stopped traffic when the lights turned green as they were only halfway across the road.

Witness Lyqueeshah Brooks captured the moment on camera and posted the photo on Facebook, where the boys were praised for their kind gesture.

Blake and Daniel were initially playing Pokemon Go – a popular virtual reality game where players can ‘catch’ the animated characters – around the streets.

Ms Brooks, who spoke to the boys, told Daily Mail Australia the pair helped push the elderly man over two crossings as he sat on his walker.

‘There’s more to the story we even helped him to the train station,’ the pair told Ms Brooks.

‘We got security to take him to the train and help him on it.’

The viral post attracted a mass of users who commended the boys for helping a stranger.

‘There is good in the world! Their parents teaching them the best lessons life has to offer. Kindness, empathy and caring,’ one wrote.

‘Wow my faith in our young has risen 10 fold. Well done boys, you made an elderly man’s day,’ another wrote.

One added: ‘Well done young men. There are not a lot like you. You make the world a better place to live in!’ 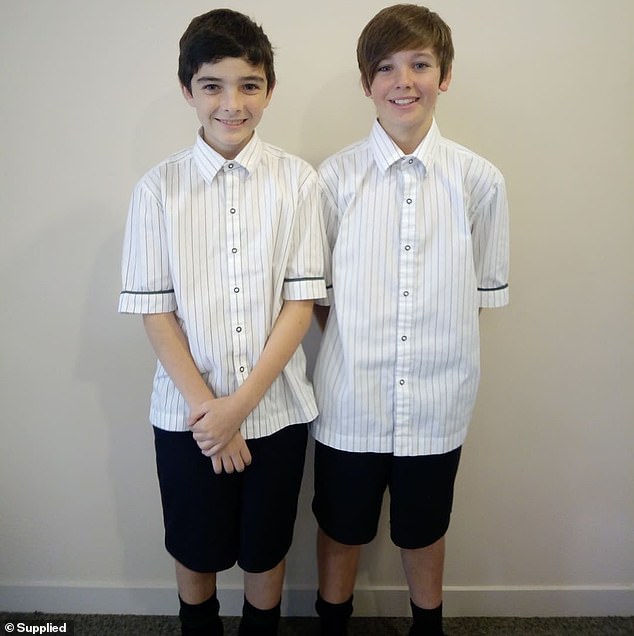 Blake Ockleston (left) and Daniel Coyle-Smith (right), spotted the frail man struggling with his walker at a Clark Street double crossing in New Lynn in Auckland’s west on Saturday

Ms Coyle-Smith, Daniel’s mother, told Daily Mail Australia she was ‘proud’ of the two boys but wasn’t ‘surprised by their act of kindness’.

‘They are both caring and kind individuals,’ she said.

‘Dan is always looking after people and genuinely cares about his friends, family and the people around him.’

Blake’s mother, Debbie Apanui, said he has a ‘very lovely heart’ and was ‘proud of him’.

The 13-year-olds told Ms Brooks: ‘We didn’t expect anyone to post it up on Facebook. We were just doing what we hope others would do too if they were in our shoes’.