14 ways to feel more content this International Day Of Happiness

This coincides with the International Day Of Happiness, which falls today.

From eating dark chocolate and drinking green tea to being grateful and meditating, lifestyle changes can make a bigger difference to people’s moods.

Studies even suggest something as simple as de-cluttering your desk can boost contentment by up to 40 per cent.

Getting plenty of sleep and spending time in nature also makes us feel better, research adds.

A piece for Women’s Health outlines 14 simple ways you can boost your mood today.

MONEY CAN BUY HAPPINESS – BUT TOO MUCH MAKES YOU MISERABLE

Making between $60,000 and $75,000 a year is ideal for emotional health, according to new research from Purdue University.

You can make up to $95,000 before your money starts to make you miserable by feeding your materialism.

The researchers suggested that this income sweet spot is probably the middle-ground between having enough money to meet basic needs and having so much that it takes attention away from other factors that contribute to happiness, such as relationships.

According to previous research, money can, on one hand, contribute to greater life satisfaction by saving time, but people are often hesitant to spend their money on these for fear of appearing lazy.

‘Money is only a part of what really makes us happy, and we’re learning more about the limits of money, lead study author Andrew Jebb said.

Look after number one

Research suggests the happiest people in the world make their own contentment their first priority, which then allows them to give more to those around them.

A small square of dark chocolate causes the brain to release feel-good endorphins and boosts levels of the so-called ‘happy hormone’ serotonin.

Go for the darkest chocolate you can find; milk varieties are often very high in sugar.

Don’t assume you could be happier

Studies show thinking you will be more content if you were only thinner, richer or more intelligent is often incorrect.

People should also be aware they appreciate life’s pleasures less the more they experience them, hence the initial ‘honeymoon phase’ of relationships.

According to a study published in the American Journal of Clinical Nutrition, people who drink at least four cups of green tea a day are 44 per cent less likely to experience depression than those who consume just one serving.

Exercise may be the last thing you feel like doing when you are down, however, research suggests it reduces sleep, eases insomnia, boosts productivity and improves overall health.

A study by the University of Michigan had participants do some photocopying, with half discovering 7p on the machine.

That was enough to make them report greater higher life satisfaction when taking a later survey. 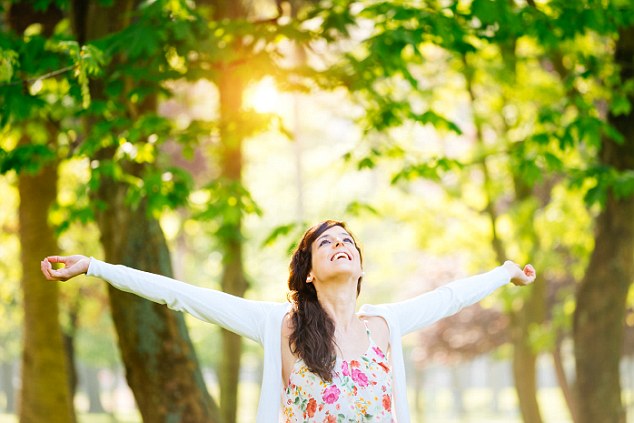 According to a study by the universities of California and Harvard, every happy friend a person has boosts their contentment by nine per cent.

Even hearing laughing triggers a response in the area of the brain that is activated when people smile, according to research from University College London.

Writing a weekly list of things you are grateful for is more than effective than doing so every day, she adds.

Hordenine, abundant in malted barley – a key ingredient in beer, activates dopamine receptors in the brain.

This then triggers a surge of the feel-good chemical to the decision-making area of the brain, German scientists claimed in September.

The findings went someway to explain why some people are never able to stop at just one drink – and end up staying for multiple.

Hordenine triggers a process called hedonic hunger – the drive to consume food or drink for pleasure, as opposed to being hungry or thirsty.

They attempted to find substances that may activate dopamine receptors in the same way as dopamine itself.

A study published in The Journal of Experimental Psychology found employees who are in control of their working areas are 40 per cent happier and 32 per cent more productive.

People who volunteer regularly are less at risk of depression, research suggests.

According to the psychologist Norbert Schwarz: ‘Making £60,000 more in annual income has less of an effect on your daily happiness than getting one extra hour of sleep a night.’

Getting just six-and-a-half hours of shut eye is associated with a greater stress response, according to a University of Surrey study.

Being in nature lowers stress levels and boosts mental health, according to a study published in the International Journal of Environmental Research and Public Health.

Living near trees, grass and flowers reduces anxiety and depression more than residing in areas with less than 10 per cent tree canopy.

Meditation can change the brain’s structure.

A study by the The National Center for Biotechnology Information found people who meditate have stronger, thicker cortexes, which is the area of the brain that processes emotion.

Spend money on others

A study published in Science had researchers given £3 or £12 to 46 people with the instruction to spend the money by 5pm.

Some were told to spend it on themselves and others to buy a gift for someone or donate it to charity.

Those who gave their money away were happier regardless of how much they had to start off with.