Some 16 holidaymakers including a teenage girl have sought legal advice after allegedly falling ill at the same hotel in Egypt where British couple died suddenly.

Isobel Westwood, 16, was diagnosed with gastroenteritis last week after staying at the Steigenberger Aqua Magic Hotel in the Red Sea resort of Hurghada.

It comes after as authorities try to establish the cause of death of John and Susan Cooper, from Burnley, Lancashire, who died last week while staying at the hotel.

Isobel Westwood, 16, was diagnosed with gastroenteritis after staying at the Steigenberger Aqua Magic in Hurghada, Egypt. She is pictured on the holiday with her boyfriend Hari Stout

Isobel, from Northfield, Birmingham, jetted off for a 12-day all-inclusive break at the resort in Egypt with her boyfriend and his mother earlier this month.

She suffered with illness during her holiday, booked through Thomas Cook, and her symptoms deteriorated upon her return home from the trip on August 20.

She visited her GP that evening and was prescribed antibiotics. But the next evening she was taken by ambulance to Queen Elizabeth Hospital in Birmingham.

Isobel had been complaining of sickness, diarrhoea and stomach cramps, and was kept in overnight at the hospital before being discharged. 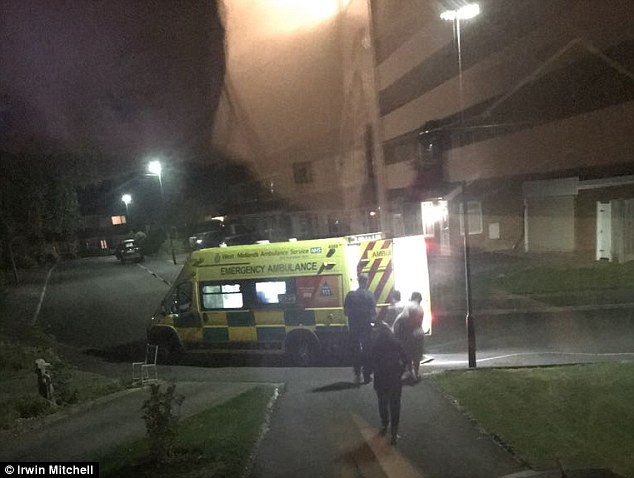 Isobel was taken by ambulance to Queen Elizabeth Hospital in Birmingham on August 21 complaining of sickness, diarrhoea and stomach cramps and she was kept in overnight

But on August 23, Isobel was taken back to hospital where she was diagnosed with food poisoning. 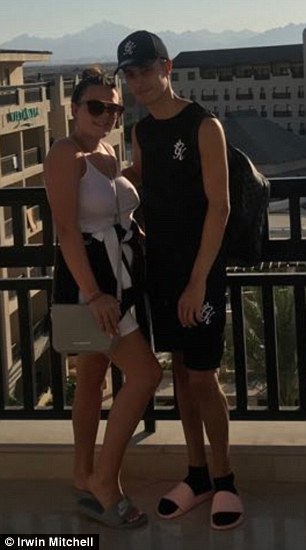 Isobel, pictured in Egypt with boyfriend Hari, suffered with illness during her holiday

She said: ‘I was really looking forward to the holiday but within days I started feeling unwell. The restaurant was dirty, food seemed to be undercooked and left out to stand uncovered so flies could land on it and there was poo washed up on the side of the pool.

‘I tried to carry on but it was really difficult and I just wanted to go home to my mum and dad. When I got home the pain kept getting worse.

‘It was so bad that I couldn’t sleep and felt like I didn’t have the strength to even walk. The pain eventually got so bad that my mum had to call an ambulance.

‘When I went on holiday I never expected that I would end up in hospital a couple of weeks later.’

Lawyers from Sheffield-based Irwin Mitchell have started investigations after receiving reports of illness among 16 guests who stayed at the five-star resort in April, June and August of this year.

Amandeep Dhillon, a personal injury lawyer at the firm, is representing those who have reported being ill at the hotel. 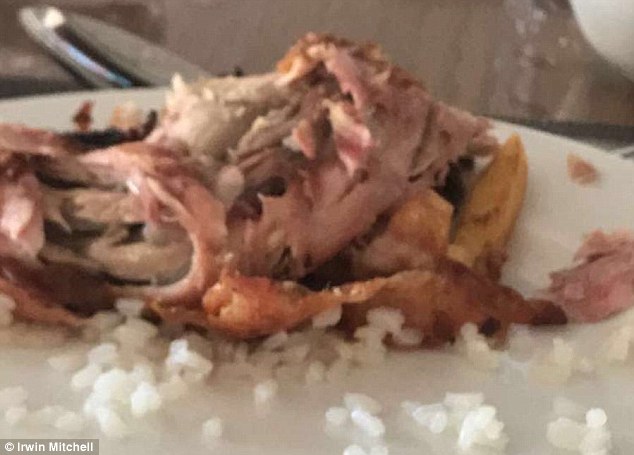 Isobel took this photo at the hotel of chicken that appeared to be undercooked, with rice

He said: ‘We are advising a growing group of holidaymakers caught up in these problems.

‘We have heard a number of concerning first-hand accounts from people who were staying at the Steigenberger Aqua Magic Hotel this summer and who fell ill with serious gastrointestinal symptoms which, for many, have required hospital admissions.

‘We are now investigating these accounts to determine the cause of illness. As part of our investigations we would like to hear from other guests who may have information about conditions at the hotel this summer.

He added: ‘Sadly, this is not the first occasion where we have been instructed to act for holidaymakers who have suffered illness, including salmonella, following stays at this hotel, as we also represent people who have fallen ill with serious gastric illness in 2016 and 2017.

‘However, it is important to stress that the investigation into the sad deaths of John and Susan Cooper is continuing by the tour operator and the authorities.

‘Therefore, it would be inappropriate at this stage to draw any comparisons between our investigations and those being carried out by the Egyptian authorities, or to speculate as to whether this is a link to this issues which we have been advised of.’ 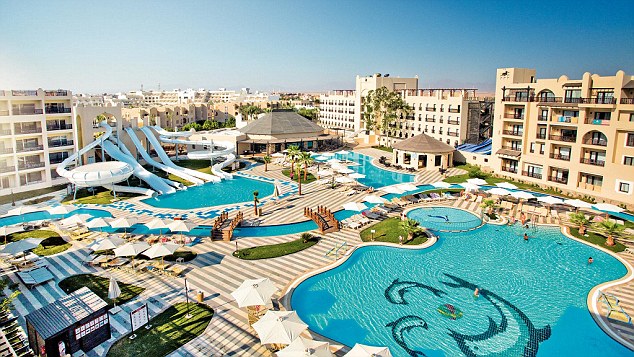 A Thomas Cook spokesman told MailOnline today: ‘We are aware that a number of customers have come forward to say they have experienced illness while staying at the Steigenberger Aqua Magic Hotel in Hurghada, Egypt. We are very sorry for any customers whose holidays have been spoiled.

‘We take all illness very seriously and have taken the decision to expand our ongoing investigation into the sudden deaths of two of our customers at the Steigenberger earlier this week to include any other customer reports of illness at the hotel this summer.

‘As part of this, we are contacting every Thomas Cook customer that has returned from staying at the hotel since August 22. We have put a dedicated team together to prioritise all complaints from this hotel.’

The company is believed to have received five claims for illnesses relating to travel at the hotel this year, out of nearly 3,500 customers who have travelled to the site.

Meanwhile, food, water and air conditioning at the hotel are being probed as authorities try to establish the Coopers’ cause of death. 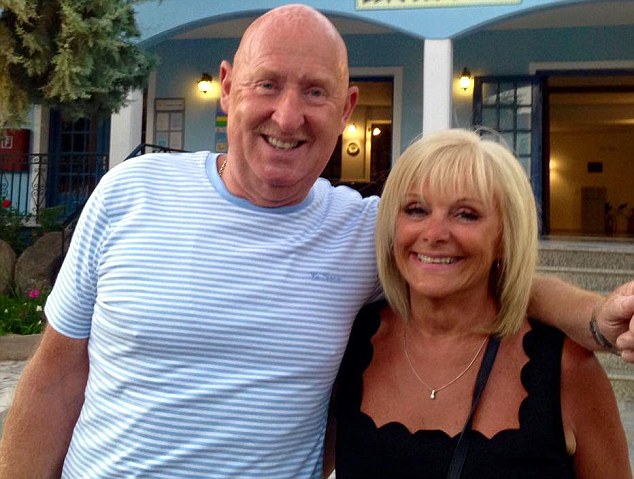 John and Susan Cooper, from Burnley, Lancashire, died while staying at the hotel in Hurghada

The couple’s family will ‘hopefully’ find out the results of the tests in ten days, the chief executive of Thomas Cook said as he promised to do everything to ‘get to the bottom of it’.

It comes after Kelly Ormerod, the couple’s daughter, said there was ‘something suspicious’ behind the deaths.

‘There is no evidence that it is a carbon monoxide poisoning. We have no evidence but I don’t want to rule out anything before I really know the cause.’

Mr Fankhauser continued: ‘Twenty-four hours after the couple died, we had our specialists… in the hotel. They took probes of the food, of the hygienic systems, of water, as well as the air conditioning systems, and all those probes are now in Egypt.

‘They are now examining and testing the probes and we support them in doing that, but that takes about ten days.’

Mr Cooper, 69, died in his room while Mrs Cooper, 63, a Thomas Cook employee, died after being taken to hospital, according to Mrs Ormerod.

Their daughter said they were ‘fit and healthy’ before their holiday and in ‘perfect health’ just hours before being taken ill.

A technical team’s inspection of the Coopers’ room showed there were no toxic or harmful gas emissions or leaks, according to a statement by prosecutor Nabil Sadeq on Saturday. 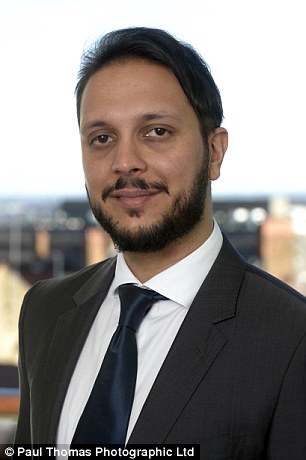 Amandeep Dhillon, a personal injury lawyer at Irwin Mitchell, is representing the tourists

It also said his office was waiting for a forensic analysis of samples taken from the bodies.

Mr Fankhauser said Thomas Cook decided to move 300 guests out of the hotel 24 hours later as a precaution after becoming aware of an ‘increased number’ of illnesses.

He confirmed that 13 customers had food poisoning but were not in a serious condition.

The chief executive told ITV that Thomas Cook had learned ‘hard lessons’ over its health and safety systems following the deaths of two children in Corfu.

He said: ‘We have taken hard lessons on our health and safety systems and we are a totally different company to three years ago.’

Christi and Bobby Shepherd died from carbon monoxide poisoning in a Thomas Cook holiday bungalow in 2006.

A 2015 inquest jury concluded the tour operator breached its duty of care over their deaths.

Egypt’s key tourism industry has been recovering from a devastating blow in 2015 when jihadists bombed a Russian airliner carrying holidaymakers from the Red Sea resort of Sharm el-Sheikh, killing all 224 on board.