Having a ‘cool dad’ beloved by celebrities sure has it perks — as the Obama girls are bound to attest to.

Over the weekend, Sasha Obama attended the Broccoli City Festival in Washington, D.C., and the 16-year-old didn’t just get to see rapper Cardi B perform — she also got to hang with the Bodak Yellow star.

Behind-the-scenes pictures from the even show Sasha smiling and sitting on a couch between 25-year-old Cardi and her fiancé Offset, 26, looking too cool to be starstruck.

VIP: Sasha Obama hung out backstage at the Broccoli City Festival this weekend (pictured in December 2016 with her parents) 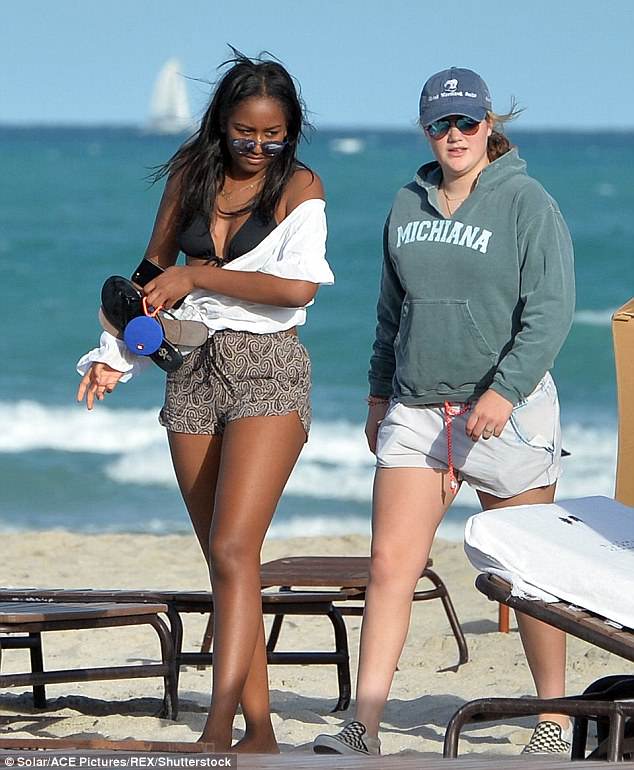 Hangin’ behind-the-scenes: The 16-year-old (pictured in January 2017) went backstage to meet rapper Cardi B and her fiancé Offset

Nineteen years old and off at Harvard, Sasha’s older sister Malia has gotten most of the press focused on her since her dad left office.

While Sasha is still underage and mostly shielded from the cameras, Malia has been spotted away at school, and was also photographed several times while she interned for Weinstein Company.

She was also notoriously photographed at Lollapalooza in both 2016 and 2017, rocking out to The Killers last year and getting snapped in 2016 smoking what some have speculated was marijuana.

Now Sasha — who is currently in her junior year at Sidwell Friends School — is off at her own festivals, hitting up Broccoli City this weekend.

In photos taken from the event, the teen can be seen wearing distressed blue jeans with a large rip at the knee, a white crop top, and more white fabric tied around her middle. 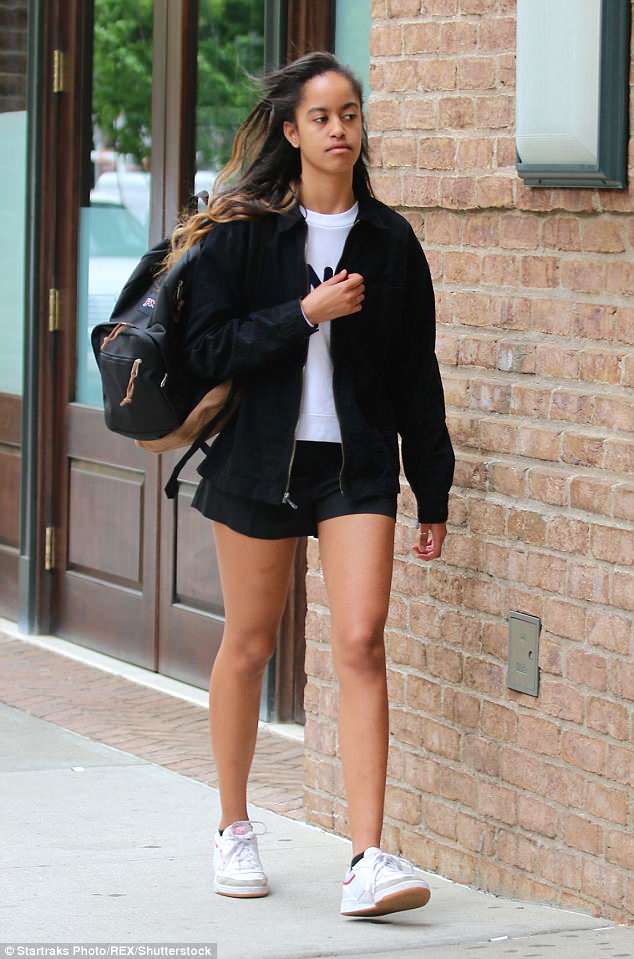 Sasha, who is still in high school, has kept a relatively low profile compared to her big sister Malia (pictured in New York City 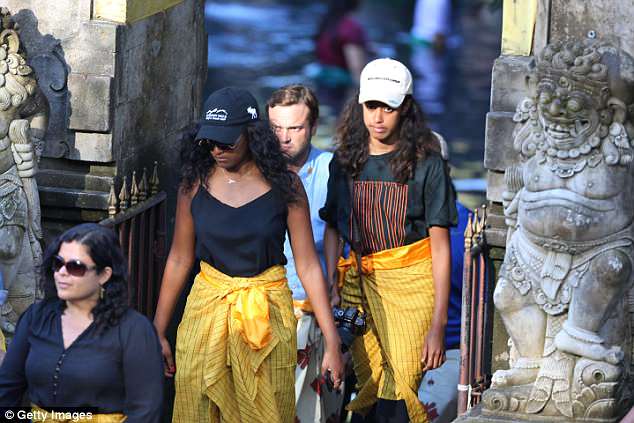 Letting loose, living life! She has also been caught dancing and smoking at the festivals

She’s also wearing several pieces of jewelry, a backpack slung over her shoulders, and sunglasses pushed back on her head.

While the former first daughter is smiling in one of the two photos, she looks far from the starstruck teeny-bopper that many others would be in her position.

From other photos shared by Cardi herself, the snaps seem to have been taken in the star’s dressing room before her performance.

In another snap, Sasha looks calmly at the camera, with Offset sitting comfortably to her right and Cardi B grinning to her left.

While it appears that Sasha kept mostly under-the-radar at the event, professional photographer Flo Ngala — who works with Cardi B — did manage to snap the backstage moment.

Cardi was performing on Saturday at the festival, held at RFK Stadium. The rapper announced that it would be her last performance for a while as she takes some time off for maternity leave. 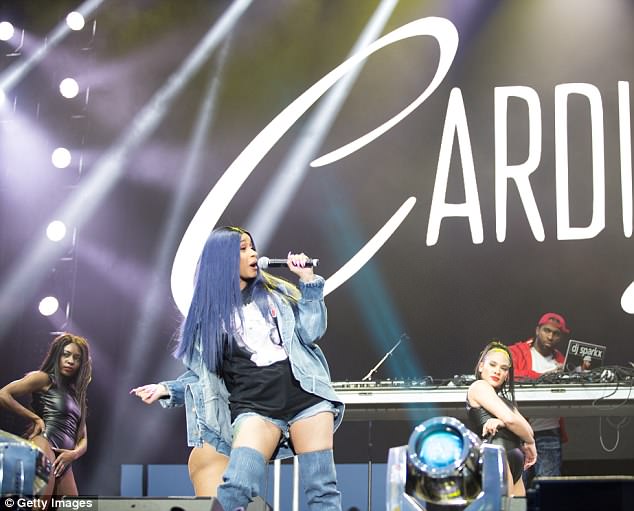 One on the way! Cardi, 25, is pregnant with her first child 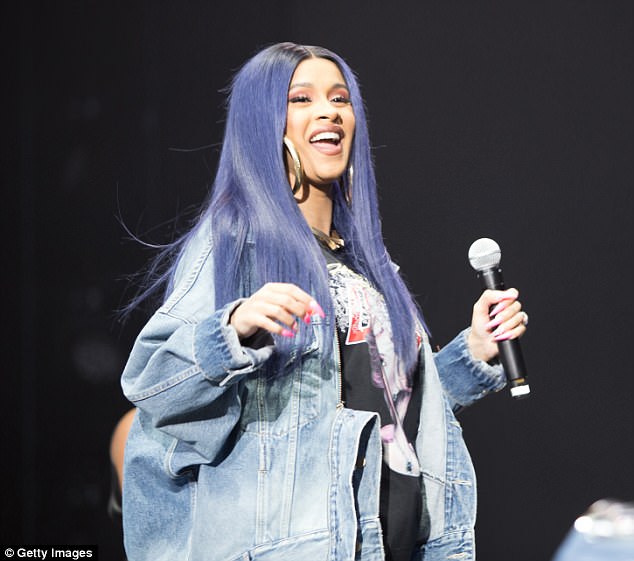 Health: She performed at the festival but announced that it would be her last concert before going on maternity leave 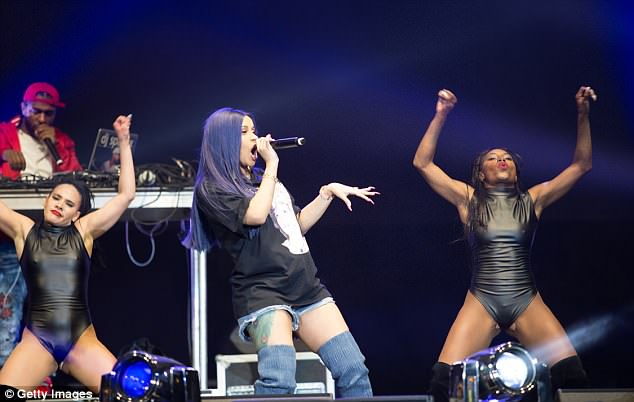 Impressive: The Bodak Yellow performer was the second-ever female rapper to reach number one on the US Billboard Hot 100 chart with a debut solo single

Earlier this month, Cardi surprised fans by revealing that she is pregnant at the end of a Saturday Night Live performance.

Though the photographer seems to have deleted the photos from her own pages, the pictures of Cardi B and Sasha have quickly gone viral and earned the admiration of social media users

‘SASHA IS STUNNING,’ wrote one emphatically, racking up over 1,000 likes.