If an American football scout had sighted Melbourne-born Daniel Faalele when he was just 12 years old, he probably would have signed him up on the spot.

Even at that tender age he stood six feet tall and weighed 100kg – and now, 10 years later, his 203cm, 175kg frame and outrageous athletic ability could make him one of the highest-paid Australian sportspeople on the planet.

The 22-year-old was taken by the Baltimore Ravens in the fourth round of the NFL draft on Sunday morning Australian time, with ESPN expert Matt Miller describing him as ‘one of the best values in the entire draft’. 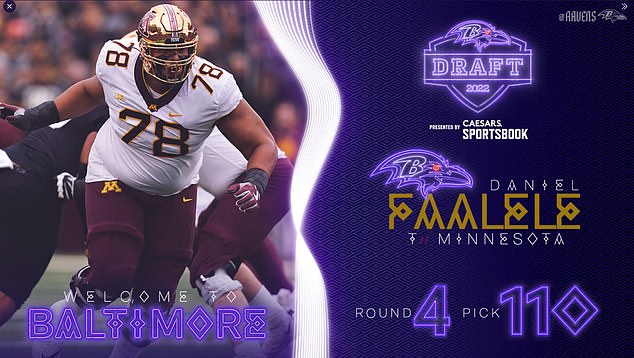 Faalele plays tackle – or to translate that into Australian, he’s one of the huge guys who starts every play hunched down with his hand on the ground, and his job is to protect the quarterback.

It’s one of the most important and highly paid jobs on the field, with the NFL’s top-paid man at the position raking in $31million a year.

Faalele only started playing American football in 2017 after being discovered by a coach for the University of Hawaii while working out at a gym in Melbourne. He was offered a college scholarship immediately.

From there he starred at a camp set up in Melbourne by coaches from Michigan, then went to the IMG Academy in Florida to start learning the game and was soon starring for their team as they went undefeated. 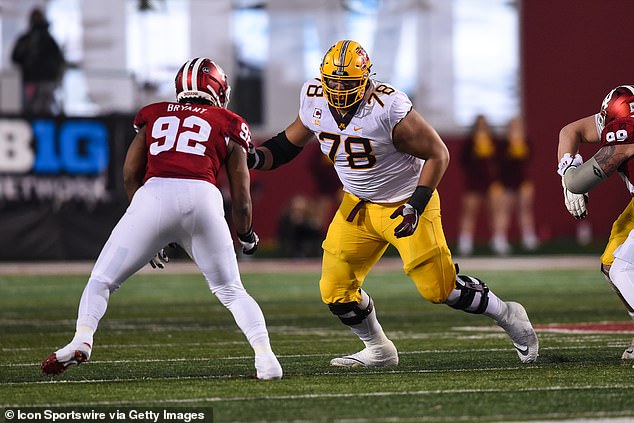 On a field full of athletes who make NRL players look small, Faalele sticks out like a sore thumb due to his freakish size – and aggressive play

But his newness to the sport didn’t hurt him at the University of Minnesota, where he played for three seasons for the Golden Gophers – and even scored a touchdown in his final game for the side.

That same inexperience wasn’t an issue for fellow Aussie Jordan Mailata, a former South Sydney NRL prospect who switched to the NFL with the Philadelphia Eagles when they picked him in the 2018 draft.

Despite being very raw, Mailata – who stands two metres tall and weighs 166kg – learned quickly and signed a four-year, $64million contract in 2021.

Faalele and the Ravens will be hoping he follows the same trajectory.

Rugby union was his first contact sport, but he quit because he didn’t like injuring opposition players. 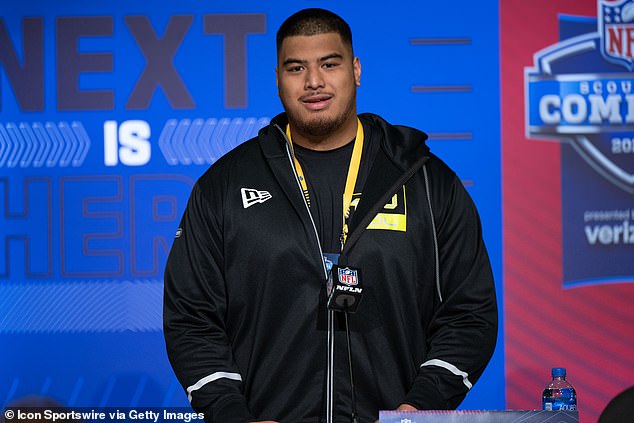 If he keeps nailing down the finer points of the game – which he never played until 2017 – Faalele could be in for a monster payday like his fellow Aussie NFL star Jordan Mailata, who signed a $64million contract in 2021

He definitely lost that inhibition with Minnesota, where he became known for his punishing blocking and aggression.

There are concerns that Faalele could be too big for the NFL, despite the league chasing larger and larger players year after year.

He wears size 18 shoes, XXXXXXXXL shirts and his mother Ruth once revealed, ‘If he was to rest for the whole day, he would still need over 3,000 calories to survive.

‘The sky is the limit for me,’ Faalele said before the draft. ‘I just need more coaching and I feel like going to the next level, I’m excited to see how far I can go.’