It is a region more usually associated with Yorkshire pudding, Tetley tea and Wensleydale cheese, but now God’s own county can boast a more exotic – and unexpected – contribution to Britain’s food supplies: caviar.

The almost impossibly expensive delicacy is normally shipped from the chilly Caspian Sea to grace the delicatessen counters of stores such as Harrods and Fortnum & Mason.

But now the sturgeon’s eggs are being produced in a former mushroom farm just outside Leeds – and going on sale in Aldi this week.

KC Caviar, based in Garforth, Yorkshire, will see its produce go on sale in Aldi next week

‘When I tell my friends that I work at a caviar farm, they say, “What? There’s a caviar farm in Yorkshire?” ’ exclaims Megan Babicz, ‘“No way!” ’ Yes way.

Because Megan, 17, is one of five workers at KC Caviar, which you’ll find down a dirt track near the former coal mining town of Garforth, past fields of winter kale and turnips.

I expected to discover a large lake – West Yorkshire’s very own Caspian. Instead, I was met by six large sheds, which a decade ago housed mushroom compost beds. Inside each shed are three tanks some 10ft across, which look like over-sized paddling pools.

And inside each pool there are 30 5ft sturgeon – dark and strangely prehistoric looking things, slowly prowling around in the shallow water.

This extraordinary enterprise was set up by John Addey, 65, a former property developer, and his son Mark, 39, who used to own a pet shop. ‘We were the largest koi carp wholesaler in Leeds,’ says Mark. ‘But to be honest, I’m not that keen on koi; I like these much better.’

His father chips in: ‘Mark was always really into dinosaurs and these things are basically just like dinosaurs. He wanted to breed them and then release then into the wild. I said that’s a good idea, but how on earth are you going to make any money?’ 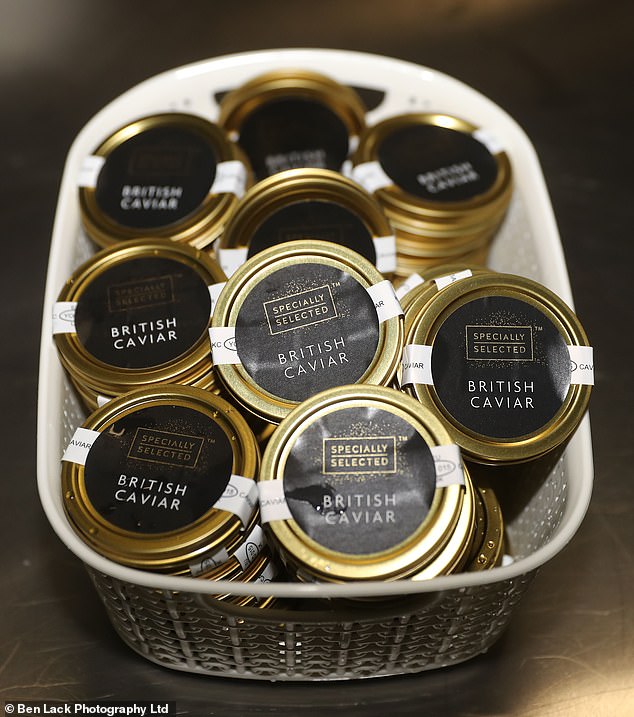 Where there’s caviar, there’s money. KC Caviar intends to produce a ton of the delicacy a year, worth more than £2 million in stores.

Not that any of this is simple. Traditionally, sturgeons are caught by Russian and Iranian fishermen, then the roe – the caviar – is harvested from the belly after the fish has been killed. It is a business model that would hardly work in Leeds.

But John stumbled across a university in Germany that produced ‘no-kill caviar’ by forcing the eggs out of the fish while they are still alive – and he bought the patent.

‘We used to call it no-kill caviar, too,’ John said. ‘But we thought that won’t go down well with Joe Public, so we say we are taking eggs from living sturgeon. The fish give us the eggs naturally.’

If this sounds weird, Addey insists it’s pretty much the same as lambing. He asks if I want to don a pair of waders to meet the fish and find out more. It’s only after I am about to hop into tank that he warns me the 16,000 litres of water is below 10C (50F), to replicate the conditions in the Caspian – and that the waders may have a leak.

But I do get to meet Willow, Amber, Megan, Kendall, Rihanna, Gwyneth, Hunter and Brooklyn. The fish – all female, of course – have been given names by Mark’s teenage daughter, Kacey, after whom the business is named. 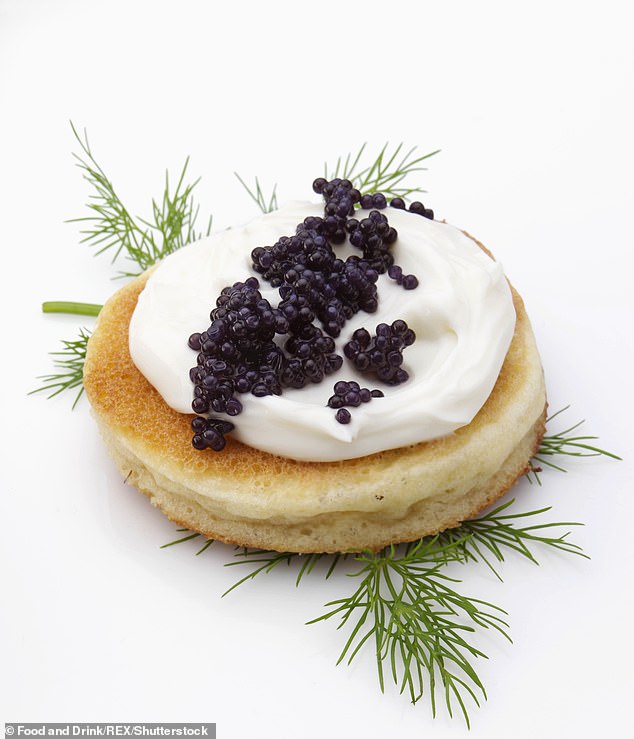 The extraordinary enterprise was set up by John Addey, 65, a former property developer, and his son Mark, 39

Megan is in the pool to help me handle the fish, who get quite uppity with my arrival. One of them – possibly Rihanna – starts to headbutt my thighs. Picking one up, you realise the skin is leathery, rather than scaly. They are also very heavy. These fish, aged eight years old, weigh between 10 and 25kg (1.5st and 2.35st) and, in theory, can carry on producing eggs until they are about 35.

John explains how they harvest the eggs without killing the fish.

‘When she’s ready to spawn, we need to make sure the temperature is right, the lighting is right, we give her a small injection to induce them. It’s a bit like an epidural.’

The fish then gets lifted out of the tank and put on a trolley and then, in a scene straight out of Casualty, rushed down the corridor to the birthing room. None of the fish are ready to spawn the week I visit, so in an absurd moment, John grabs a stuffed toy sturgeon – bought on eBay as a novelty doorstop – to demonstrate the process.

‘We lay her on her side with a damp cloth over her eyes so she doesn’t get stressed.’ Mark then ‘massages the tummy, pushing the eggs down these tubes’.

The eggs eventually emerge down the other end out of an opening called – euphemistically – the vent. ‘We catch them in a bowl.’

Each fish can produce about 1kg of caviar at a time which depending on the quality can be worth between £1,800 to £8,000 once it hits the shelves. No wonder it has been nicknamed ‘black gold’.

This is entry-level caviar, known as Baerii, rather than its more famous cousin Beluga, and in Aldi it will be sold in tiny 10g pots – the size of a small tin of lip balm – for £17.99. It’s a valuable haul from each fish. 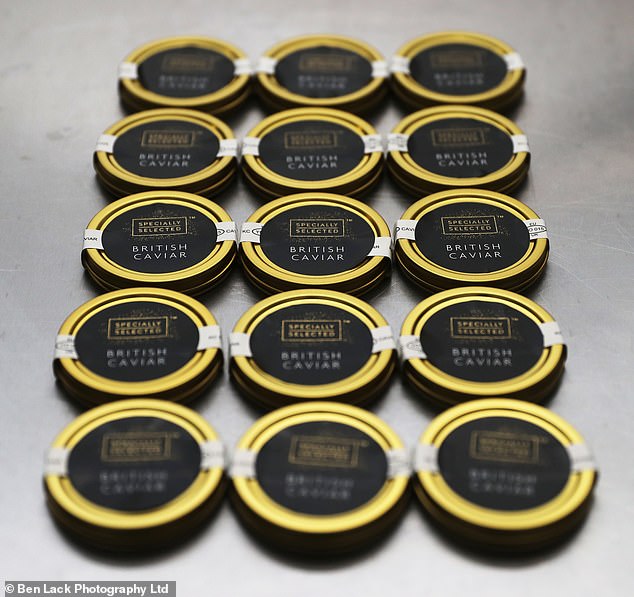 KC Caviar intends to produce a ton of the delicacy a year, worth more than £2 million in stores

The eggs are then passed through a hatch into a small industrial kitchen, which is kept permanently below 4C (39F) to keep food inspectors happy. To enter, you need a hairnet and a thick coat.

In the kitchen, the eggs are rinsed and then undergo the slightly controversial process of being washed in what’s known as a calcium bath for 15 minutes. Taking the eggs from the fish when they are ready to spawn, as John does, is later in the eggs’ life cycle than with traditional caviar production, so the extra treatment is required.

‘It makes the embryo firmer, so you now have a firmer egg,’ he explained. Without the calcium bath, the caviar would collapse into a mush. But not everyone is impressed with this method.

In particular, Britain’s only other caviar producer, Kenneth Benning, who set up Exmoor Caviar in 2010. Mr Benning farms sturgeon in Devon and makes the delicacy the traditional way, by killing the fish. He argues that KC’s method is ‘not the real thing’, arguing that the calcium bath changes molecular structures within the roe. ‘It’s just not true,’ insists John. ‘The Food Standards Agency has decided that the caviar we produce is caviar.’

Aldi is nervous about the two men’s rivalry damaging its posh new line. The supermarket later shows me a letter from the FSA confirming that it has ‘no safety concerns with the product’ and washing roe in calcium chloride is a ‘standard industry process’.

But it is true that the KC Caviar has a slightly different texture to traditional caviar, as I find when I finally get to try some.

Standing in the freezing kitchen, John places a tiny amount on to the back of my hand – an old-fashioned method to ensure no metal cutlery taints the flavour.

‘There are lots of different flavours depending on which fish it comes from, ranging from earthy mushroom to citrussy grapefruit,’ says John appreciatively. ‘With this I’m getting hazelnuts, mushrooms… it’s creamy.’

The world has certainly changed, especially in this corner of Yorkshire. Garforth was once a major centre for mining; now it is a dormitory town for Leeds. Indeed, John’s father was a coal miner in the area. ‘I’m not sure he’d even know what caviar was. If he did, he’d have thought it was for kings and queens, lords and ladies,’ he said.

And what would he make of this venture? ‘Baffled, probably. But he loved fishing, so who knows?’

‘My favourite is with bangers and mash. With sausages, peas are fine, but caviar on top of the mashed potatoes makes it superb. It’s a Yorkshire way of doing it.’

So can it beat Fortnum & Mason’s finest?

Baerii caviar from Aldi (on sale from Friday)

Farmed in Yorkshire using the ‘no-kill’ method, the eggs are big – nearly 3.5mm wide, the size you usually only get with Beluga, the most expensive of all caviar.

The eggs do not, however, melt on the tongue. You have to chew or pop them, which means the flavour doesn’t spread around the mouth in such a luscious way. But it tastes good: hints of mushroom and almonds.

A decent introduction to the rare black gold of the Caspian, sorry, Garforth.

This stuff is farmed in China, and Baerii is entry-level caviar for most people. It is wonderfully creamy. This melts on the tongue and has that inescapable, almost earthy, caviar taste.

The eggs themselves are quite small, and a bit squashed together, but nonetheless have a rich oiliness. Good stuff and arguably a purer caviar experience than the Aldi version of Baerii.

The Oscietra is considered to produce better quality caviar than the Baerii variety of sturgeon. This is farmed in Belgium, and has an almost Belgian chocolate quality to it – the rich, salty oiliness coats your mouth. It is super smooth and nutty.

The eggs are a good 3mm size. Is this expensive? Hell, yes. Is it worth it? It depends how much you like caviar. If money were no object, I could eat this all day.