Stop hogging the lane! 19 PIGS escape onto M62 and cause 40-minute delays and four miles of traffic as police try to capture the runaway animals

A group of pigs are wreaking havoc on the M62 in Salford after deciding to make their way into the road – causing 40-minute delays and four miles of traffic.

At least 19 pigs were spotted on motorway cameras roaming around on the inside lane and along the grass verge.

Pictures from the scene show traffic officers armed with brooms attempting to herd the escaped pigs out of the road. 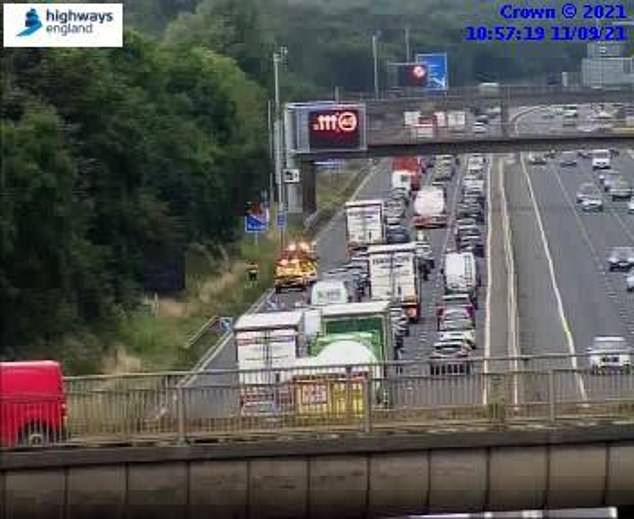 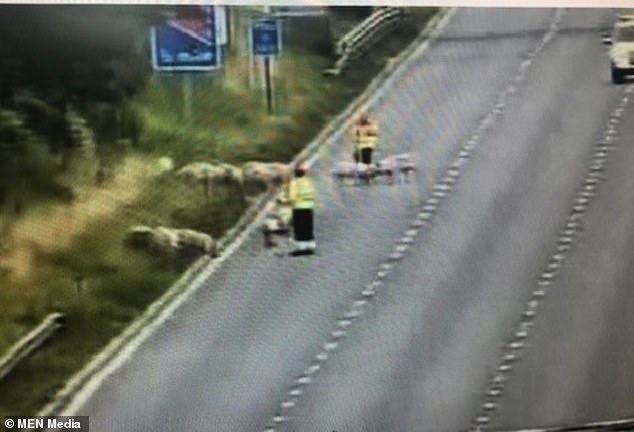 North West Motorway Police said the animals were on the loose between junctions 12 and 11 eastbound – the Eccles and Birchwood interchanges.

Highways England Northwest tweeted: ‘ #M62 westbound #J12 (#EcclesInterchange #M60 #M602) to #J11 (#WarringtonEast #Birchwood #A574) traffic has been temporarily stopped due to a number of pigs which are being a bit of a swine and won’t move.’

The cheeky animals’ appearance meant all the lanes on the motorway had to close and resulted in 40-minute delays and four miles of stationary traffic.

National Highways confirmed just before 11.20am that the pigs had been successfully moved on and returned to their field. 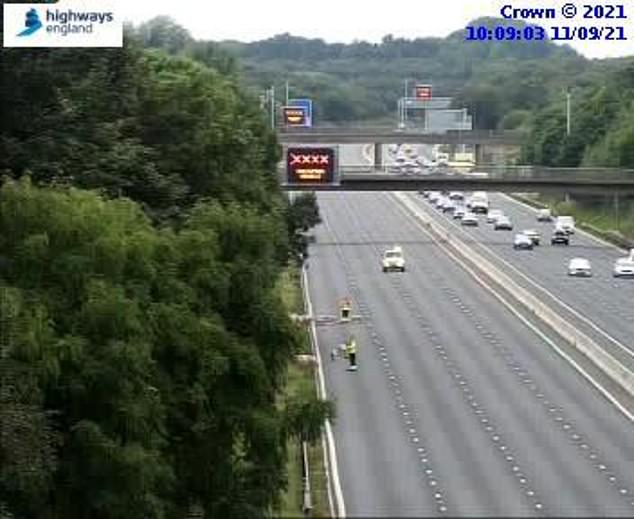 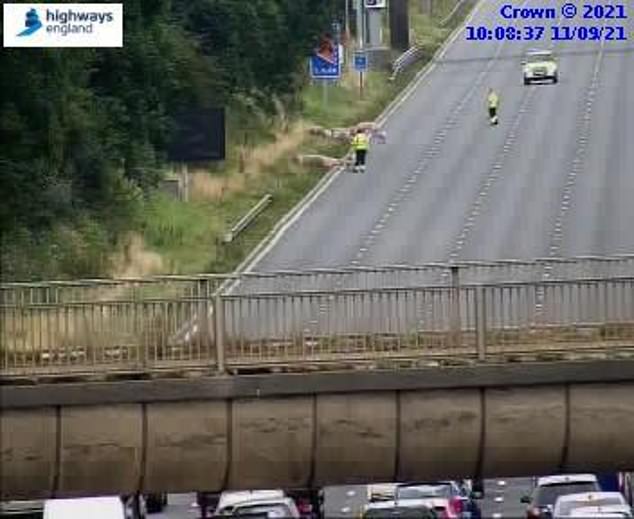 It comes after traffic was held up for around an hour-and-a-half after an escaped cow broke through a fence and wandered onto the M25 – causing traffic chaos on Thursday.

The rogue heifer stood in the middle of the anticlockwise carriageway leaving all traffic held up in both directions.

Highways England officers and the farmer tried to get the farm animal back into the field next to the motorway as vehicles backed up from near Junction 6 at Godstone, Surrey.

Vehicles ground to a halt from around 12 miles near Merstham, Surrey, to Clacket Lane services near Westerham.

Motorway cameras showed all traffic was stationary just after 9am with the cow roaming across the road as Highways England tried to shepherd it back to the green pastures. 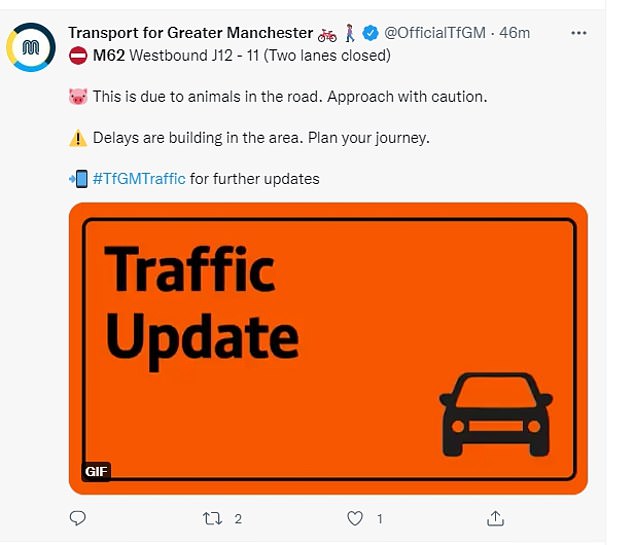 Surrey Police said the cow made a bid for freedom just after 8.30am, but officers did not attend the scene.

A spokeswoman for the force said: ‘We were called at 8.35am by a member of the public to alert us to the fact that a cow had broken through the fence at Godstone on the M25, anti-clockwise between junctions 7 and 5. Highways England are dealing with the incident and are in touch with the farmer.’

Even after the animal was removed, there were further delays of another half-an-hour due to the backlog of traffic.

Highways England confirmed the runaway cow was ushered back into the safety of the field just after 9.20am.

A spokeswoman said: ‘A cow left an adjacent field and made its way on to the M25 anti-clockwise, between junction 6 and 5 near Godstone in Surrey at 8.36am this morning. 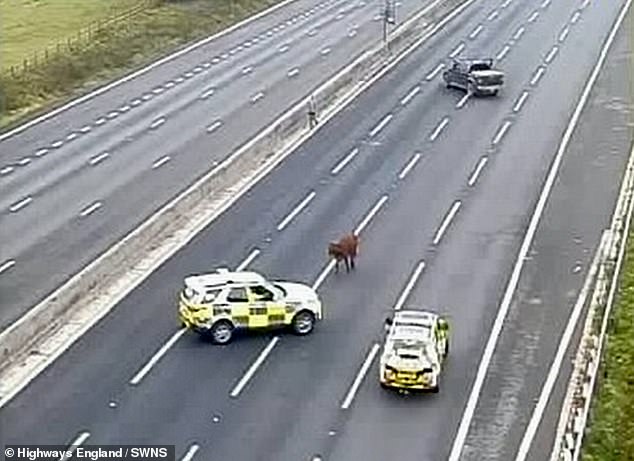 Highways England were forced to close the M25 in both directions for 90 minutes after a cow broke onto the carriageway near Godstone, Surrey 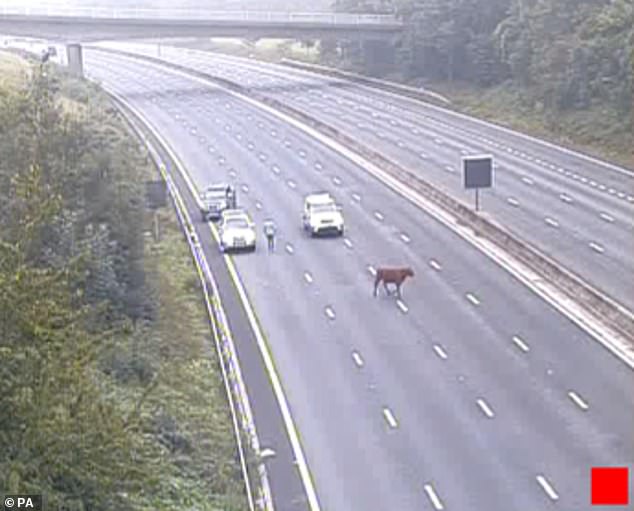 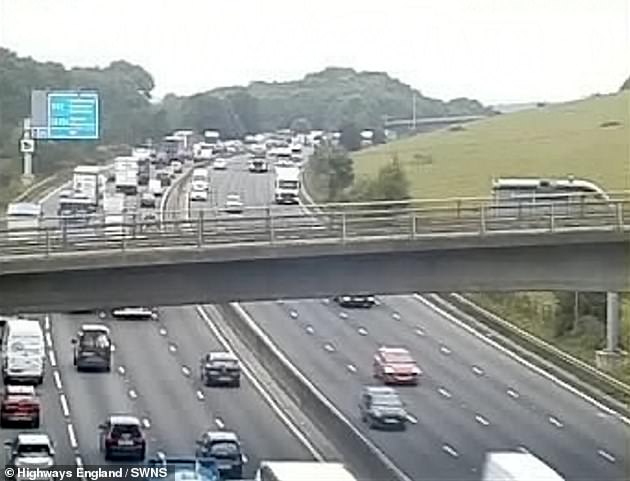 ‘Traffic officers and the farmer worked together and the cow is back in the field. Traffic has been released in both directions.

‘There are residual delays of 30 minutes above normal journey time reported.. The carriageways were re-opened at 9.23am.’

One passing motorist wrote on social media: ‘Stuck in traffic #J6 #M25. I think there’s a large animal on the motorway.’

While another Twitter user pictured the cow in the middle of the road and added: ‘This is what happens when you travel on the M25. Oh dear.’