At least 2.6million US children are hooked on e-cigarettes, according to damning new figures that reverse a downward trend in recent years.

The rebound comes amid the rise of new, brightly-colored disposable devices that contain as much nicotine as 50 traditionally cigarettes.

A report by the Centers for Disease Control and Prevention (CDC) today found 2.55 million middle or high schoolers had used the device within the past 30 days.

Super-strength disposable devices — like Elf bars — were the most common type of device used (55 per cent).

The vast majority of children (85 per cent) had used flavored e-cigarettes that federal regulators have cracked down on in recent years amid concerns they are purposefully marketing themselves to children.

They are often sold in glossy displays and come in a variety of colours and child-friendly names and flavors, such as bubble-gum, jelly babies and strawberry milkshake.

The marketing of the devices has been linked to alcopops, alcoholic drinks sold in bright neon-colors which are ultra sweet or fruit flavored.

More than 2.5 million US children use e-cigarettes – rising a half-million from last year and reversing downward trends in recent years. The Centers for Disease Control and Prevention ( CDC ) reports that 2.55 million Americans in middle or high school admit using the device in the past 30 days. It is a jump of 500,000, or of 24 per cent, from 2021. It is the first increase since the CDC started gathering annual data in 2019

Although widely viewed as safer than smoking, the long-term effects of vaping remain a mystery and doctors fear there could be a wave of lung disease, dental issues and even cancer in the coming decades in people who took up the habit at a young age.

EVERYTHING YOU NEED TO KNOW ABOUT VAPING

E-cigarettes are devices that allow you to inhale nicotine in a vapor rather than smoke.

They do not burn tobacco or produce tar or carbon monoxide — two of the most harmful parts of tobacco smoke.

The devices work by heating liquid that contains nicotine and flavorings.

They can come as vape pens — which are shaped like a pen or small tube with a tank to store e-liquid and batteries — or pod systems that are rechargeable and often shaped like USB sticks.

E-cigarettes are not risk-free but are believed to cause less harm than smoking.

However, its liquid and vapor contain harmful chemicals that are also found in traditional cigarettes, but it much lower levels.

These chemicals have been linked to lung inflammation, chronic coughs, shortness of breath and lung disease.

Some chronic users have developed obstructions in their lung pathways that cause them to suffer ‘asthma-like’ symptoms.

There have also been cases of e-cigarettes exploding or catching fire.

Can children buy them?

Like cigarettes, an American must be at least 21 years old to purchase a vape.

Many physical retail locations neglect to check identification for customers, allowing children to access the devices.

Around 75 per cent of Juuls in the hands of minors in the US came from physical locations, a 2018 report found.

Many also get the device from a friend or family member.

What has the FDA done to curb vape use?

The FDA has banned the sale of flavored nicotine products in the US unless a company has received their expressed approval.

It found that there was not enough evidence to confirm its products did not harm public health.

However, the FDA then paused its decision in July while it carries out an additional review on the company’s products.

Other popular brands, like Puff Bar, have received warnings from regulators about the sale of flavored devices as well.

DailyMail.com has previously spoken to teenagers who have developed regular coughing fits and have to use inhalers to breathe properly after just a year of regular e-cigarette use.

Others say because the devices don’t have any of the nasty drawbacks seen with standard cigarettes — such as a bad smell and after-taste — they can smoke them all day long.

The CDC published its findings Thursday as part of the 2022 National Youth Tobacco Survey.

It represents the first year-on-year increase in e-cigarette use among US youth since 2019. Just over two million reported use in 2021.

But the current estimates are still significantly lower than the 5.4 million users in middle and high school in 2019.

Still, officials worry that the recent increases in prevalence of the devices spells out a long-term issue.

Dr Deirdre Lawrence Kittner, director of CDC’s Office on Smoking and Health, said: ‘This study shows that our nation’s youth continue to be enticed and hooked by an expanding variety of e-cigarette brands delivering flavored nicotine.’

‘Our work is far from over. It’s critical that we work together to prevent youth from starting to use any tobacco product – including e-cigarettes – and help all youth who do use them, to quit.’

The report found that 84.9 per cent of those who reported regular use of the devices were using flavored e-cigarette flavors.

To stay on the market, each company was forced to apply individually to allow their products to remain on shelves.

Juul Labs, whose products became the face of the dangerous underage smoking trend after they shot to popularity in the 2010s, had its application rejected by the FDA in June.

The devices were temporarily pulled from shelves before the FDA issued a stay on its decision to give the agency time to review more scientific evidence.

‘Adolescent e-cigarette use in the United States remains at concerning levels, and poses a serious public health risk to our nation’s youth,’ said Dr Brian King, director of the FDA’s Center for Tobacco Products, said in a statement.

‘Protecting our nation’s youth from the dangers of tobacco products— including e-cigarettes—remains among the FDA’s highest priorities.’

Among users, 27.6 per cent said that they puffed on their e-cigarette each day. Just over 40 per cent reported using it at least 20 or more of the last 30 days.

The FDA issued a warning to to EVO Brands LLC and PVG2, which operate under the brand Puff Bar on Thursday.

The firms are alleged to be selling the devices in the US without authorization from regulators.

They have three weeks to respond to the FDA.

‘Congress gave the FDA authority to hold manufacturers and retailers who violate the law accountable,’ Dr Brian King, director of the FDA’s Center for Tobacco Products, said in a statement.

‘FDA is actively working to identify violations and to swiftly seek corrective actions, particularly for products popular among youth.

‘We will use all compliance and enforcement tools available to us, as appropriate, to protect our nation’s youth.’ 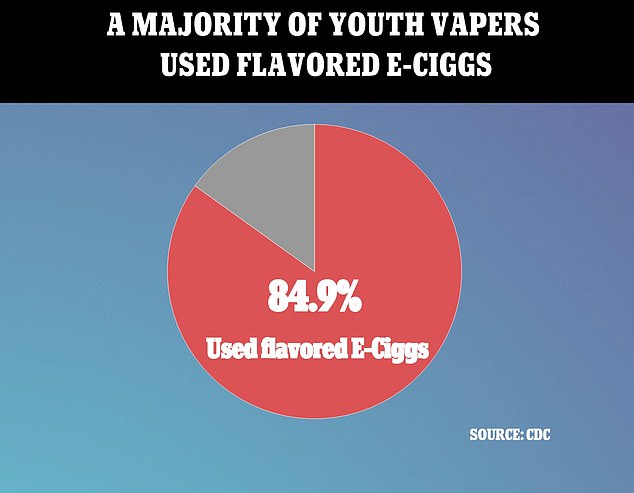 The CDC report found that a vast majority, nearly 85 per cent of teen e-cigarette users, report using flavored nicotine products. The FDA is cracking down on flavored tobacco products in an effort to reduce teen smoking rates in the US 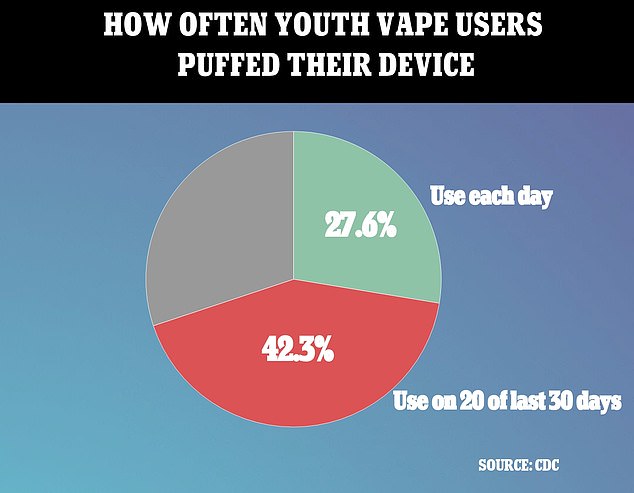 The CDC found that more than one-in-four of the teen users reported using their e-cigarette each day, and another 40 per cent used it in at least 20 of the last 30 days

Experts are alarmed by the prevalence of nicotine use among young people in America.

‘The lungs are still growing [in younger age groups],’ he explained.

‘Your lungs really continue rolling up until about the age of 35. So if you’re introducing things that are causing pulmonary symptoms that early, you’re setting up to be chronic patients.

‘Maybe there’s a reversibility to it, if we can get them off the products, but if they continue to use it we’re looking at a permanent damage that may be irreversible.’

Many are unaware of the dangers of the devices. 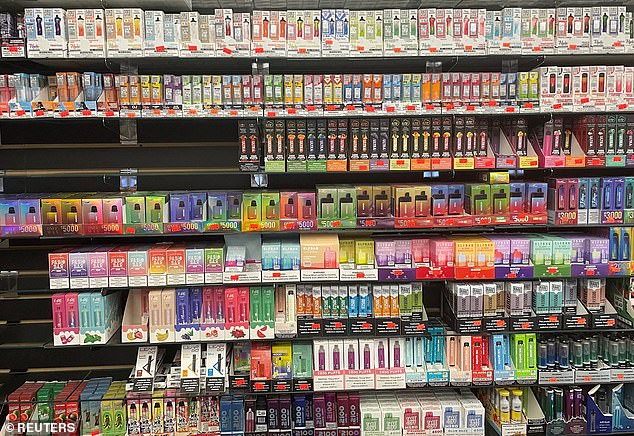 The FDA has cracked down on the sale of flavored e-cigarette devices in recent years. Regulators banned them earlier this year and forced companies to individually re-apply for authorization to sell flavored nicotine. Pictured:  A shop line-up of e-cigarettes in Raleigh, North Carolina 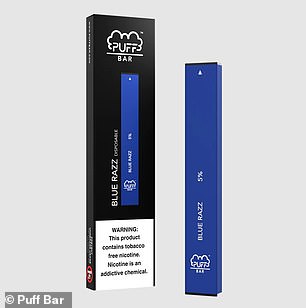 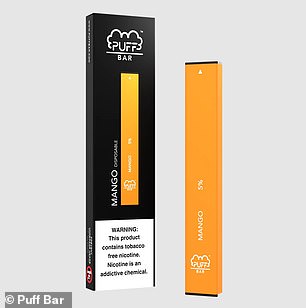 While use of e-cigarettes has not been linked to cancer in the same way that cigarettes have, Galiatsatos warns that other conditions like ‘popcorn lung’, COPD and asthma could strike frequent vapers.

‘There are plenty of other scary non cancer things that can happen to the lungs when you introduce noxious chemicals,’ he explained.

‘That should always gain our concern. Right? Chronic lung diseases are a top three causes of global deaths around the world.’

The Biden administration has targeted flavored tobacco and nicotine over the past two years.

In addition to the flavored-vape ban, the FDA also restricted sales of menthol cigarettes earlier this year.

Regular vape users could be putting themselves at risk of suffering obstructions to their lungs’ airways and asthma like symptoms, a new study finds.

Researchers at Harvard University found that chronic vapers were suffering severe lung damage after years of using the devices – a worrying prospect as prevalence of the devices grows among teenagers and young adults.

Nearly 10 percent of Americans – and more than one-in-ten high schoolers – are regular e-cigarette users, according to official figures.

The devices have been the target of regulators during the Biden administration, with many fearing that their proliferation will cause a surge in lung issues like cancer, popcorn lung, and COPD in the coming decades.

‘Our investigation shows that chronic pathological abnormalities can occur in vaping exposure,’ Dr David Christiani, a professor of medicine at Harvard and senior author of the study, said in a statement.