2,000-mile snow swath to cause WHITEOUT blizzard conditions in central US over Thanksgiving weekend

A 2,000-mile swath of snow is expected to bring on blizzard conditions across the central US until Monday evening, with predictions of flight cancellations and road warnings for motorists traveling over Thanksgiving weekend.

After the coldest Thanksgiving Day in decades for most of the Northeast as well as freezing rain striking the Midwest and the Pacific Northwest being inundated with snow, weather conditions across the United States are only set to get worse.

A whiteout has been called as an existing weaker rainstorm will combine with the new one, creating a chilling mixture of snow and increased winds that will extend the spread of icy conditions in the country.

A 2,000-mile snow swath is expected to bring blizzard conditions on the central US

Reports said the weather will worsen in the High Plains Saturday night and progress to part of the Mississippi Valley Sunday. It will most likely reach the Great Lakes region by Monday.

It comes after snow began to fall Thursday in Cascades and Sierra Nevada in the West.

Moving east across the Upper Midwest and Rockies Friday night to Saturday, those planning to drive on the Interstates 70 and 80 in the Great Plains were warned to be especially vigilant.

But the new blizzard conditions are predicted from Topeka, Kansas, and Omaha, Nebraska, as well as Des Moines, Iowa, Rockford, Illinois, and Madison, Wisconsin, on Sunday. 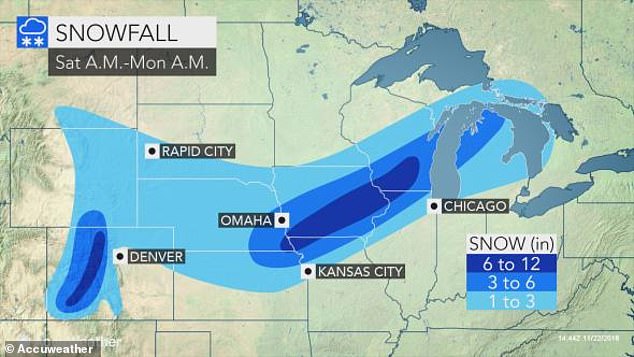 Although it may begin at a mix of rain and snow temperatures are expected to drop and those traveling on the Interstates 35 and 80 are warned to be careful in the impending snowstorm.

The Central Plains can expect approximately 3 to 6 inches of snow while the Upper Midwest could experience between 6 and 12 inches.

Going into Monday, the likes of Milwaukee and Chicago may feel the brunt. Flight cancellations and delays are possible at this time and the same goes for Detroit, Pittsburgh and Cleveland. 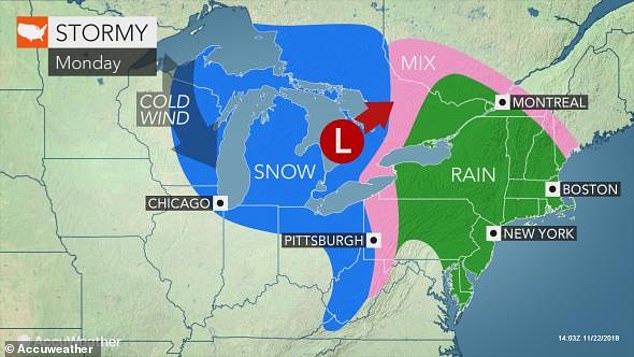 ‘The combination of extra moisture from Lake Michigan, colder air and strong winds may lead to whiteout conditions and a rapid accumulation of snow in Chicago during the second half of the storm,’ according to AccuWeather Meteorologist Steve Travis.

It sounds like just the beginning for the icy conditions as the Great Lakes and Ohio Valley’s eastern area could receive snow.

Upstate New York and New England may see rain turn into heavy snow too by the end of Monday. 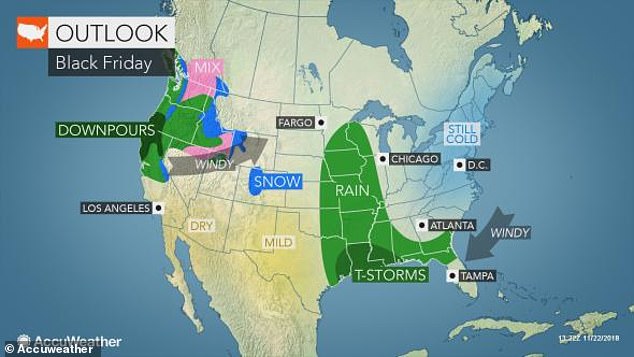 It comes after an Arctic blast of air on Thursday pushed temperatures 15 to 25 degrees Fahrenheit colder than the Thanksgiving holiday, one year ago, in the greater New York City area.

Thursday’s forecast showed a high of 27 degrees and lows of 19degrees, with winds blowing up to 25mph and gusts up to 30mph, marking New York City’s coldest Thanksgiving in over a century.

The last time Turkey day was this cold was more than a century ago on November 28, 1901, when temperatures were a freezing 26 degrees, according to ABC7’s Accuweather-Alert. Temperatures in 1871 were as low as 15 degrees with a high of 22.