On Saturday, Vienna Beef recalled 2,000 pounds of hot dogs after an inspector found some contained pieces of metal.

On Monday, there was a nationwide recall of Purely Elizabeth granola – sold everywhere from Amazon to Target to Whole Foods – after a customer reported finding pieces of plastic, glass and rock in amongst their crumble.

Both incidences, thought to stem from manufacturing issues, come amid a rise in food recalls in recent years. 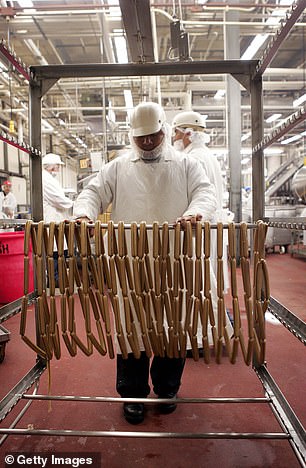 Banana nut butter grain-free granola by Purely Elizabeth (left) was recalled after a customer found bits of rock, plastic and glass in a packet. Vienna Beef (pictured, right, inside the factory) was forced to recall hot dogs after finding pieces of metal

The more than a century-old company, based in Chicago, spotted its own mistakes, alerting the US Department of Agriculture straight away.

On Monday, the firm recalled 203 10-pound packages of beef frankfurters from restaurants across Illinois, Wisconsin and Indiana.

Company executives say they are certain all of the meat was retrieved before it reached patrons’ plates.

Purely Elizabeth is a natural granola brand started in New York City by then-aspiring nutritionist Elizabeth Stein, whose moreish recipes won her a following among the health conscious, to the extent that she secured $3 million in funding from General Mills in 2017 for her now booming business.

It grew from a few muffins and one type of granola to an entire range of different granolas and snacks that can be bought online and nationwide in stores. 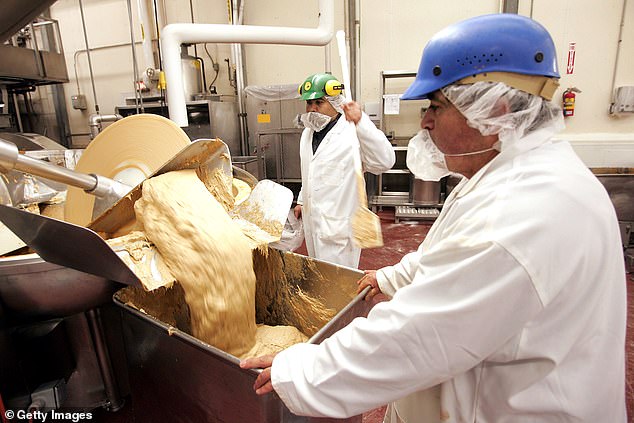 Workers remove beef mixed with other ingredients to make hot dogs from a mixing machine at the Vienna Beef factory in Chicago, Illinois

But this week the firm was hit with a snafu when it emerged there were ‘foreign objects’ – namely plastic, glass, and rocks – in cashews from one of their Colorado-based nut providers.

The report came from a customer, though no injuries or illnesses have been reported.

The cashews may have made it into various products, all with a November 2019 expiry date, including: