Richard Driscoll, who worked in the FDNY’s Engine 91 in East Harlem for 34 years before retiring in 2002, died on Wednesday. He was 73

A retired firefighter who risked his life to save others during 9/11 became the 200th person to die from health issues related to the terror attack.

Richard Driscoll, who worked in the FDNY’s Engine 91 in East Harlem for 34 years before retiring in 2002, died on Wednesday. He was 73.

His death comes just six days after a fellow retired firefighter, Kevin Nolan, who also helped rescue victims of the 2001 terror attack on the Twin Towers and helped clean up the toxic site, died at the age of 58 following a battle with cancer.

On Thursday, New York City Mayor Bill de Blasio paid tribute to both brave firefighters who lost their lives almost two decades after the worst terrorist attack on US soil.

‘200 members of the FDNY have now succumbed to WTC-related illness. They didn’t hesitate to run into danger. They stayed until the work was done. The Senate MUST fully fund the 9/11 Victim Compensation Fund.’

More than 500 firefighters have died as a result of the attacks, either directly on September 11, 2001, or from illnesses related to that day. 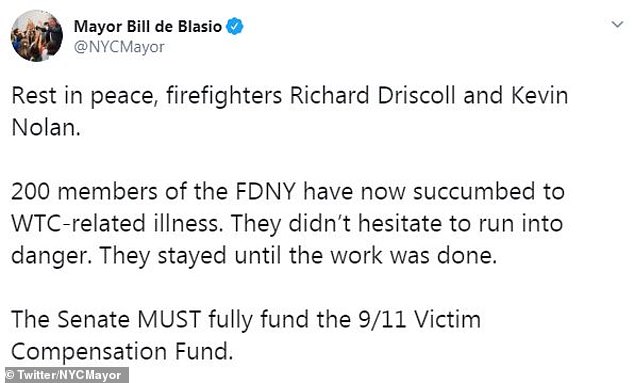 Fire Commissioner Daniel A. Nigro said: ‘It is almost incomprehensible that after losing 343 members on September 11, we have now had 200 more FDNY members die due to World Trade Center illness.

‘These heroes gave their lives bravely fighting to rescue and recover others. We will never forget them.’ 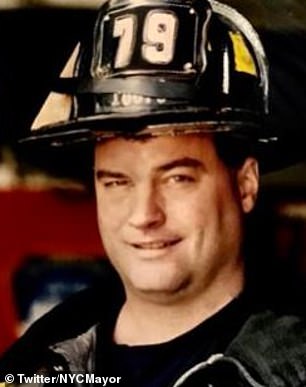 Nolan, who also helped rescue victims of the 2001 terror attack on the Twin Towers and helped clean up the toxic site, died at the age of 58 following a battle with cancer

The collapse of the World Trade Center towers caused major health concerns for many firefighters, police officers, and New York residents in the area, such as chronic cough, asthma, sinus congestion, certain cancers, stress-related disorders, and depression among the many other symptoms and conditions, reports the World Trade Center Health Program.

The September 11th Victim Compensation Fund was created to provide compensation for any individual or representative of a deceased individual who was harmed or killed as a result of the terrorist attacks or the debris removal efforts that took place in the immediate aftermath.

While the House passed a bill last week which would cover the medical bills of 9/11 first responders and volunteers through 2090, as well as compensate those who lived near the terrorist attack sites, Senators Rand Paul and Mike Lee have held up the bill which also would provide more funding for the September 11th Victim Compensation Fund.

Former Daily Show host John Stewart has blasted Senator Rand Paul’s decision to slow down a bill that would guarantee funding for 9/11 first responders as ‘an abomination.’ During an interview with Fox News, he described Paul’s decision as ‘absolutely outrageous.’

Paul cited the nation’s ‘massive debt’ as the reason why and claimed any new spending should be offset by other cuts.

‘So many years later, we continue to lose those who displayed such incredible bravery on that terrible day, and in the weeks that followed,’ Fire Commissioner Daniel Nigro told the Daily News. 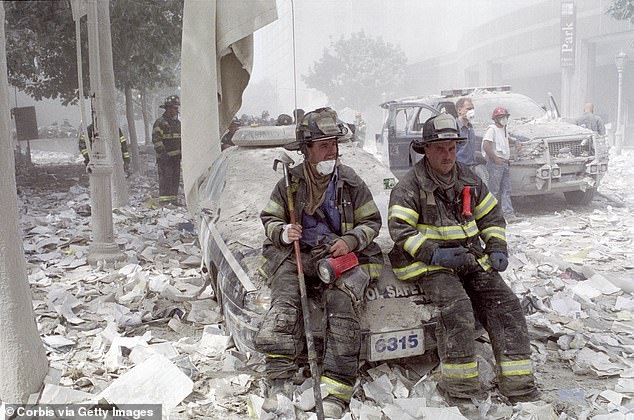 Firefighters gather near ground zero after the attack on the World Trade Center on September 11, 2001 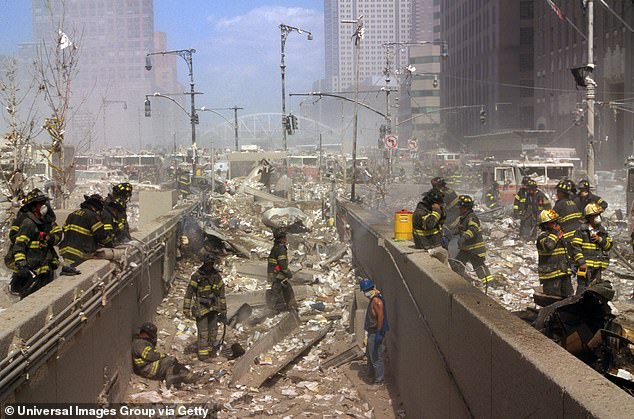