2010 heatwave released the same amount of CO2 as 1.6 million cars

This proved fatal for more than 420 square miles (1,100 square kilometres) of seagrass, which naturally converts carbon dioxide into oxygen.

This mass extinction resulted in an extra nine million tons of carbon dioxide into the atmosphere, roughly the equivalent to the annual CO2 output of 800,000 homes or two average coal-fired power plants.

An ‘unprecedented’ Australian heatwave in 2010 raised sea temperatures by four degrees Celsius for more than two months. This mass extinction led to the release of nine million tons of carbon dioxide into the atmosphere. Pictured is a piece of organic-rich, peat-like sediment collected from a seagrass bed in Shark Bay

The study was led by researchers at the Institute for Environmental Science and Technology at the Universitat Autònoma de Barcelona (ICTA-UAB).

The team compared the coverage of sea grass in satellite imagery before and after the heatwave at Australia’s Shark Bay, a UNESCO World Heritage Site.

Lead researcher Ariane Arias-Ortiz, a PhD candidate at ICTA-UAB, said: ‘The widespread losses in the summer of 2010/11 were unprecedented.

‘The net loss of seagrass extent was accompanied by a dramatic shift in seagrass cover.

Shark Bay was believed to be one of the largest remaining seagrass ecosystems on Earth, storing up to 1.3 per cent of the total carbon stored in seagrass soils worldwide. 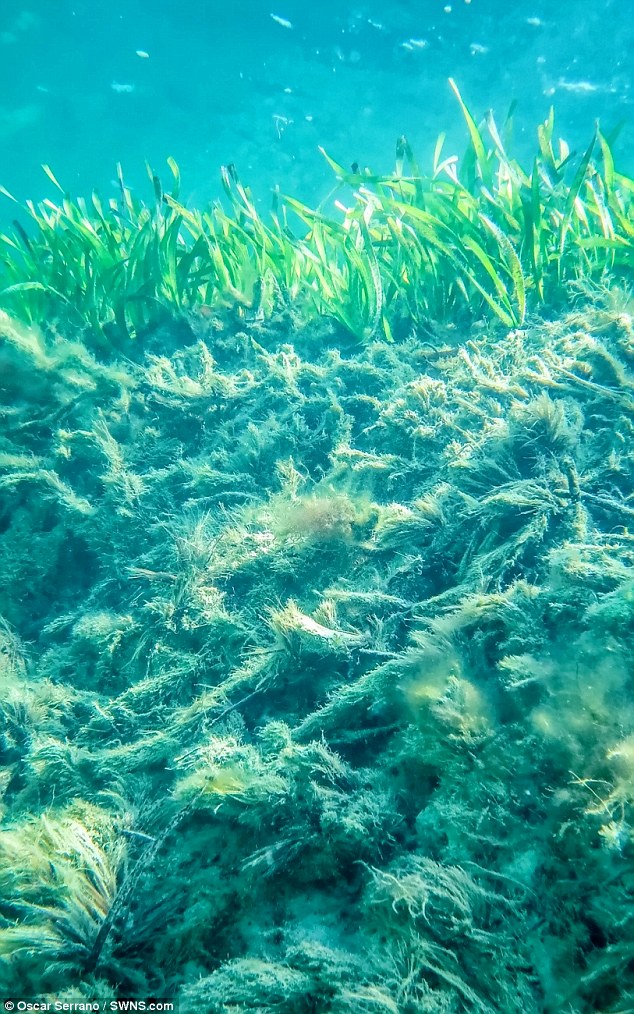 The unseasonably warm weather proved fatal for more than 420 square miles (1,100 square kilometres) of seagrass. Australia’s Shark Bay (pictured) was believed to be one of the largest remaining seagrass ecosystems on Earth

WHAT WILL CLIMATE CHANGE DO TO OUR OCEANS?

Climate change will contribute to ocean acidification, according to the National Ocean Service.

This change can be attributed to higher levels of greenhouse gases emerging as a result of human activities.

Climate change affects the ocean in a variety of ways.

A new study has found that methane flares in a region off the coast of Norway are not caused by climate change as was previously assumed. However scientists are warning that the man-made effects of climate change are still persisting (file photo)

It can cause sea levels to rise and coral in the sea to be smothered.

Climate change can also affect the ocean’s currents and cause ‘murky’ water conditions with reduced amounts of light, according to the National Ocean Service.

The organization has provided the following tips for lowering the amount of damage done to the oceans:

Alongside the satellite imagery, the researchers took samples from 50 Shark Bay sites and undertook soil modelling to make their calculations of potential CO2 release.

They found the loss of seagrass at Shark Bay after the 2010-2011 marine heat wave released up to 9 million metric tons of CO2 into the atmosphere over the three years following the event.

Researchers initially mapped 70 per cent of this UNESCO World Heritage Site in 2014 and found a 22 per cent loss of seagrass habitat – equivalent to a 420-square-mile (1,100-square-km) loss of meadows.

The researchers used their estimated loss of seagrass at Shark Bay to calculate the likely amount of carbon dioxide the extinction event would have released into the atmosphere. 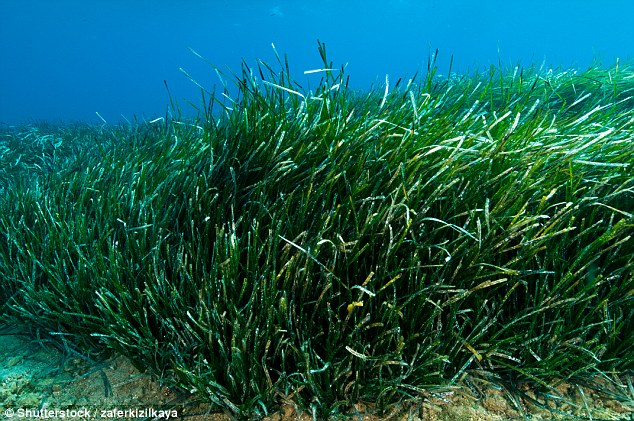 Researchers initially mapped 70 per cent of this UNESCO World Heritage Site in 2014 and found a 22 per cent loss of seagrass (stock image) habitat – equivalent to a 420-square-mile (1,100 km2) loss of meadows

Professor Carlos M. Duarte, professor at King Abdullah University of Science and Technology and co-advisor, said: ‘This decrease is significant because seagrass meadows rank among the most intense CO2 sinks in the biosphere, giving them the name “Blue Carbon ecosystems”.

‘They take up and store CO2 in their soils and biomass through biosequestration.

‘The carbon that is locked in the soils may remain there for millennia if seagrass ecosystems, which offer physical protection to these stocks, remain intact.’

Ms Arias-Ortiz added: ‘Although seagrass meadows are amenable to restoration, more importantly, we should be looking at avoiding the loss of the seagrass carbon stores because CO2 emissions from degraded seagrass ecosystems greatly surpass the annual sequestration capacity of healthy meadows.

‘With climate change forecasted to increase the frequency of extreme weather events, the permanence of these carbon stores becomes compromised, further stressing the importance of reducing greenhouse gas emissions and implementing management actions to avoid adverse feedback on the climate system.’

The findings were published in the journal Nature Climate Change.