It is the annual awards night that celebrates Australian talent in the recording industry.

And the 32nd annual ARIA Awards held at Sydney’s The Star casino is off to a roaring start for 5 Seconds of Summer, Amy Shark, Courtney Barnett and Kasey Chambers

The Australian pop band, who opened the annual music awards with a rocking performance of Youngblood won the gong for Best Australian Live Act.

AS IT HAPPENS: 5 Seconds of Summer win Best Australian Live Act at the 2018 ARIA Awards while Amy Shark takes out Best Pop Release

‘Oh wow this is a huge category and thank you and I don’t mean to sound like a d*** so this is my second pop release in a row and that’s insane,’ she said in her acceptance speech.

Shortly after, the Gold Coast singer, who is up for nine awards including Best Female Artist and Album Of The Year slipped out of her elegant black lace frock and into a sparkly jacket, jeans and platform sneakers and hit the stage to perform her hit song, ‘I Said Hi,’ from her new album, Love Monster. 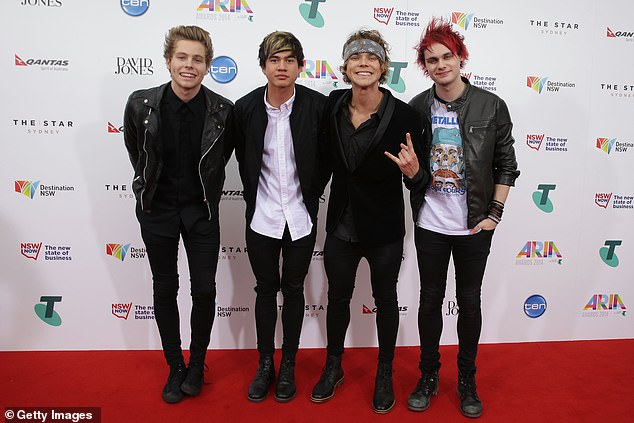 5SOS scooped up their second award for the evening, scoring the ARIA Music Award for Best Group.

Grammy Award-winner, Keith Urban is hosting the Australian music industry’s night of nights after more than a decade-long hiatus from the event.

The Australian country music star last appeared at the ARIAs in 2007 when he won Best Country Album for Love, Pain and the Whole Crazy Thing.

The country crooner kicked off the awards ceremony with a risqué joke poking fun at the trophy itself.

After spotting his actress wife Nicole in the front row of the crowd he warned potential winners to be careful of the famously sharp tipped award.

‘They’re not the biggest pricks in the room but they are close,’ he quipped.

Alongside him was British songstress Rita Ora, who looked stunning in a sparkling red frock that hugged her curvy body.

Later in the evening, British singer, George Ezra took to the stage to perform his chart-topping hit single, Shotgun.