A ‘breath-taking, vast and intimidating’ image of ocean waves crashing has won the top prize in a prestigious photography competition celebrating Australian and New Zealand snappers.

Hetherington’s photograph was chosen from more than 3,000 submissions in the 2020 competition across 12 categories.

The Alpha Awards was designed to showcase the work of Australian and New Zealand photographers on Sony Alpha lenses.

‘On the morning this photo was taken, my car broke down on the way to the beach so it was a surprise I even made it out for a swim this day but sure lucky I did even though it included a ride home on the back of a tow truck,’ Hetherington said about Backwash in a post on Facebook.

Other winners included Laurie Winter, of Wellington, New Zealand, for her submission titled Mt Taranaki Eruption in the Astrophotography category; David Symonds, of Melbourne, Australia, for Mediation in City/Street; and Australian photographer Gary White for his On The Street Vienna in Compact Camera.

Hetherington, the Grand Prize winner, was awarded $10,000 worth of Sony camera gear. Other category winners each took home $2,000 worth of equipment.

World Photographer Organisation CEO Scott Gray, one of 26 judges, said: ‘It is very difficult to capture a single image which is engaging, elegant and timeless which is why I chose Oscar Hetherington’s “Black Wash”.

‘The sea is a vast, breath-taking, intimidating and constantly changing force that is difficult to compartmentalise into a single image and I believe this image goes a long way in achieving that; it is both breath-taking and calm’.

Photographer Oscar Hetherington was awarded Grand Prize for his image, titled Backwash. It was labelled as ‘vast’, ‘intimidating’ and ‘breath-taking’. The New Zealander said on social media: ‘Short backstory behind the image on the morning this photo was taken, my car broke down on the way to the beach so it was a surprise I even made it out for a swim this day but sure lucky I did even though it included a ride home on the back of a tow truck’ 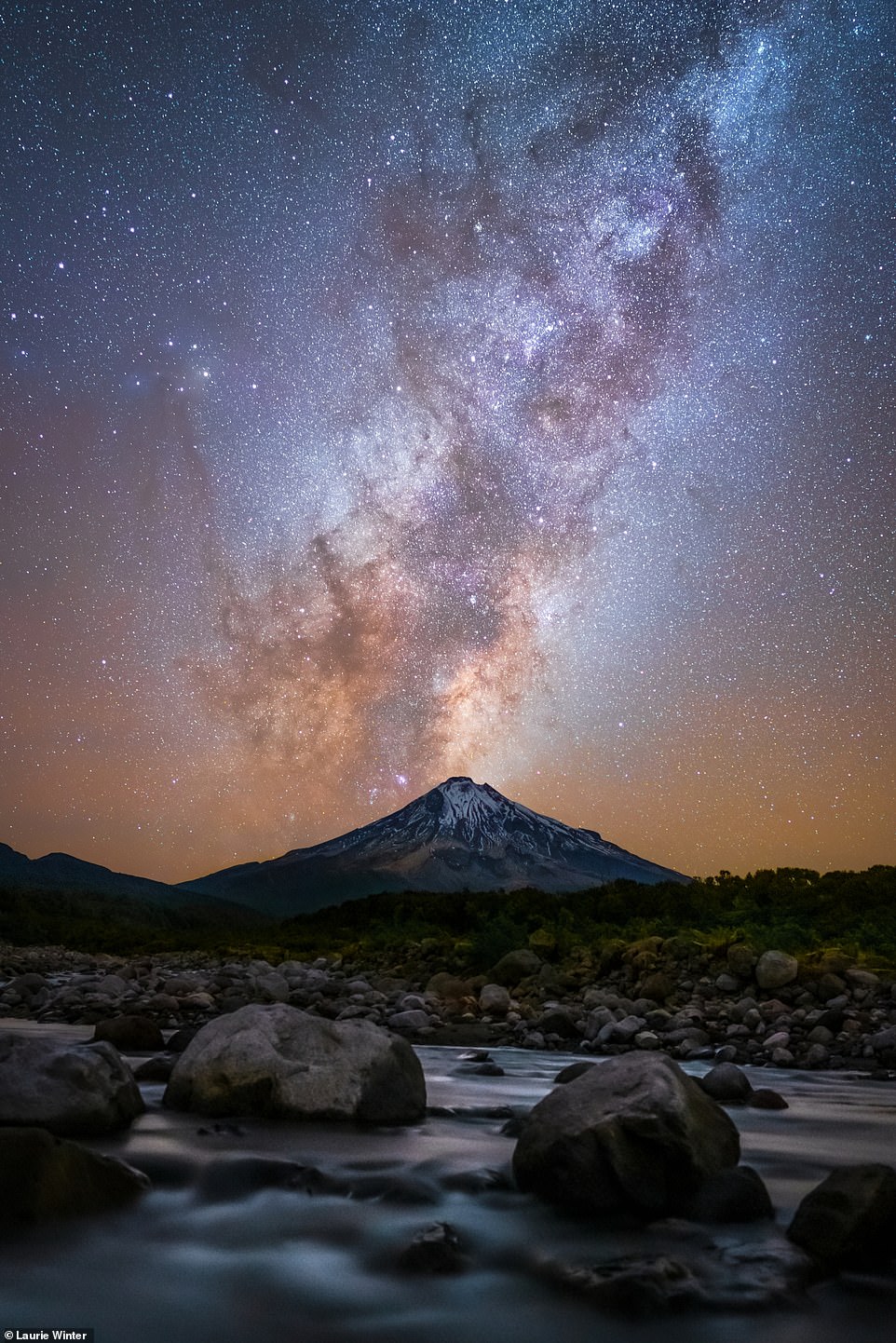 Photographer Laurie Winter was awarded Astrophotographer winner for her submission, titled Mt Taranaki Eruption (pictured). The image was taken on a Sony A7R iii and 24mm F1.4 GM lens, and was captured when she left Level 3 COVID-19 lockdown in New Zealand. Winter said on social media: ‘How lucky we are as a country that we are able to start getting freely amongst nature again. Even though I was freezing cold standing here under the stars, it is hard to feel more alive. I am still practicing my astrophotography, and there are a number of things I would do differently if I tried this photo again’ 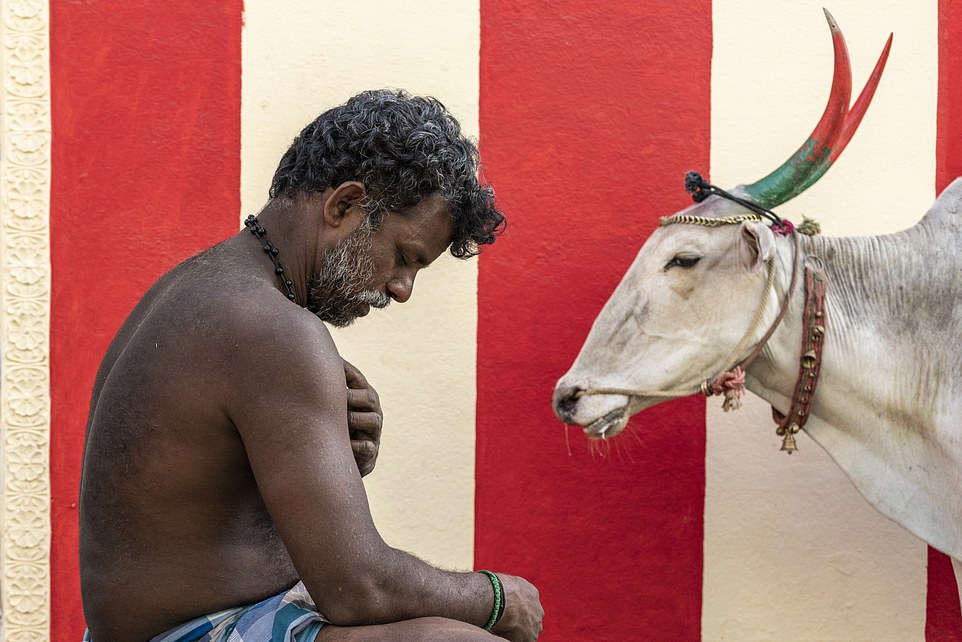 Photographer David Symonds was awarded as winner in the City/Street category for his submission, titled Mediation (pictured). It was taken in Thiruvannamalai, Tamilnadu, India. Taking to social media, Symonds said: ‘So happy to be the winner of the 2020 Sony Alpha Awards – City/Street, Australia and NZ for my entry ‘Meditation’ taken on a recent street photography workshop in India. My thanks to Sony Australia and my street photography mentor’ 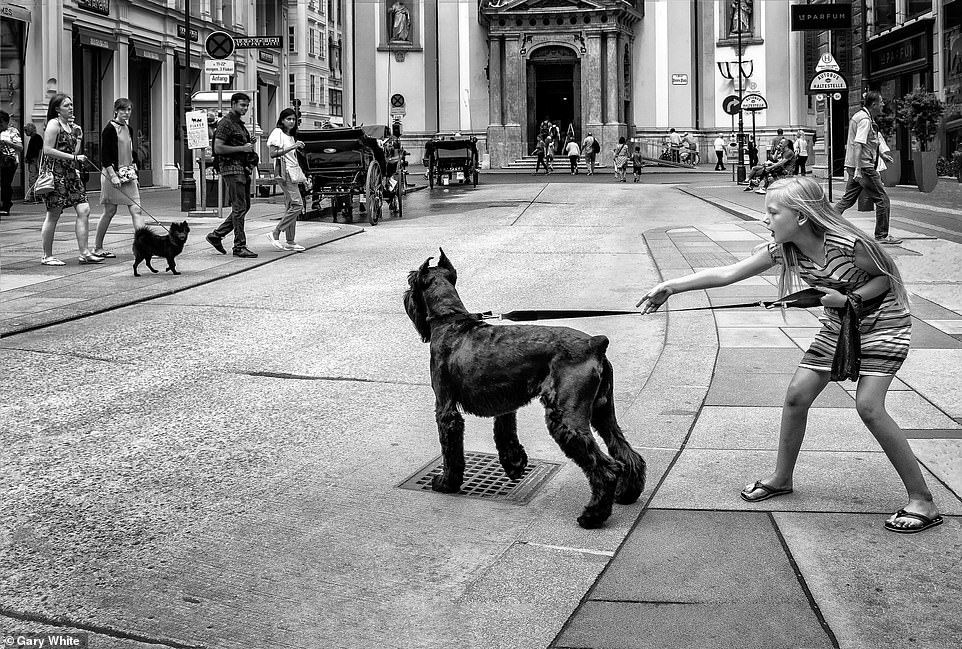 Photographer Gary White was awarded as winner in the Compact Camera category for his image, titled On The Street Vienna (pictured). The image is of a young girl holding her dog’s leash tightly, in a bid to prevent it from running toward another dog, which it is staring at. White’s image was taken on Sony camera DSC-RX100M3, which has a Vario-Sonnar T* ft. 8 lens 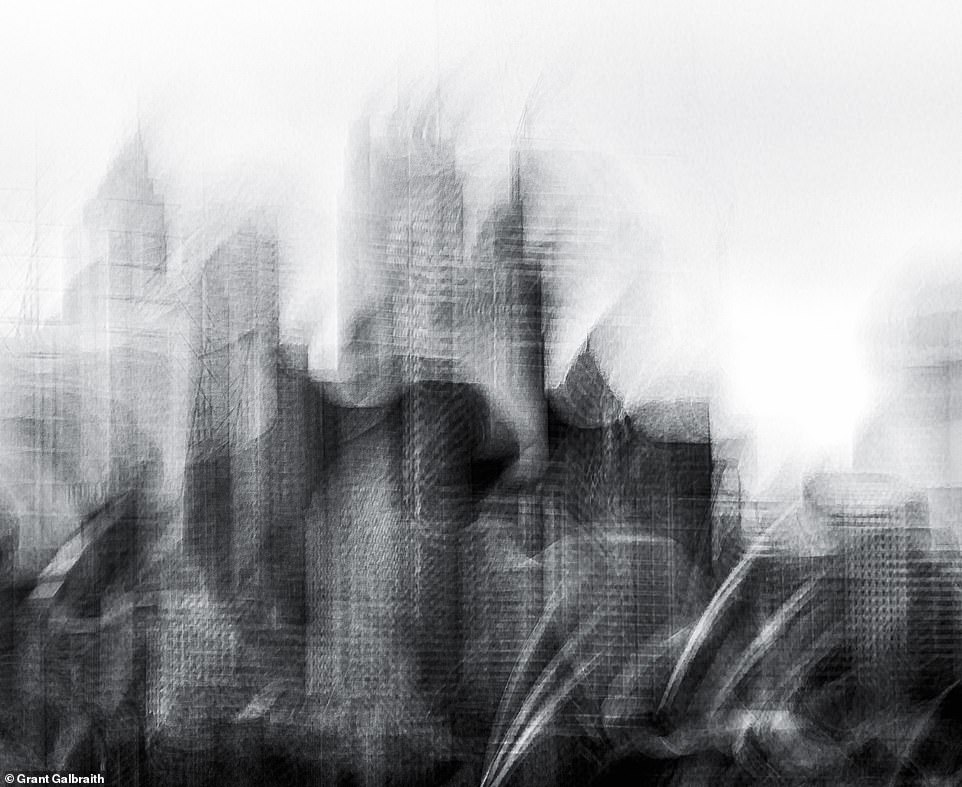 Photographer Grant Galbraith was awarded as the winner of the Creative category for his image, titled The Arrival (pictured), submitted into Sony’s 2020 competition. It is a beautiful black and white image, which holds a lot of mystery as it is not specifically of anything particular 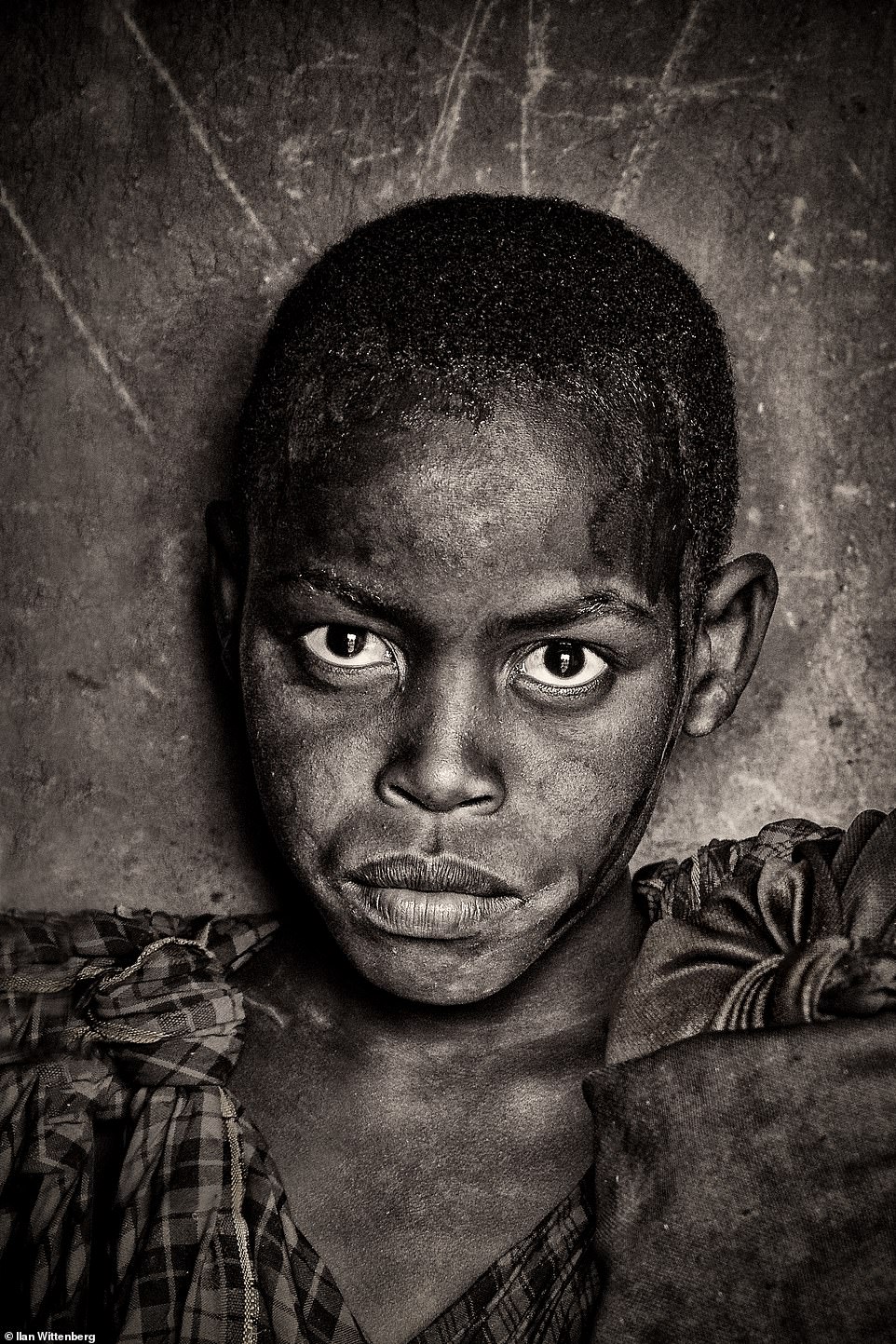 Photographer Ilan Wittenberg, of New Zealand, was awarded as Editorial winner for his submission, titled Timid (pictured). Taking to social media, Wittenberg said: ‘During this project, I made a point to learn basic phrases of the Maasai language to connect with the community – I found that the Maasai people opened up much more when they saw that I was engaged in their language and culture. I faced numerous challenges during this project, including extremely limited time for photographing the people as well as technical issues in capturing facial details using natural light only. I made a point to ask people’s permission, and create rapport. One of the guides taught me how to say: “My name is Ilan. What is your name?” using the Maa language. I also ensured that I was able to tip the people who agreed to be photographed to thank them for their time’ Photographer Jesse Little took home first prize in the Landscape category. He was awarded for his submission, titled Golden Glow (pictured), which was taken at Poon Hill. Taking to social media, Little said: ‘After trekking the Annapurna Circuit for the previous 20 days, our final hurdle was a hike up to Poon Hill to see the the sunrise. We left early and hiked hurriedly up the 400 metre stepped ascent. When we reached the top it was still foggy, not a mountain in sight. Just as we were joking that this was a bleak end to an otherwise fantastic journey, the clouds parted for a mere 3 minutes and let through this incredible view of the golden morning light hitting the Annapurna South Peak’ 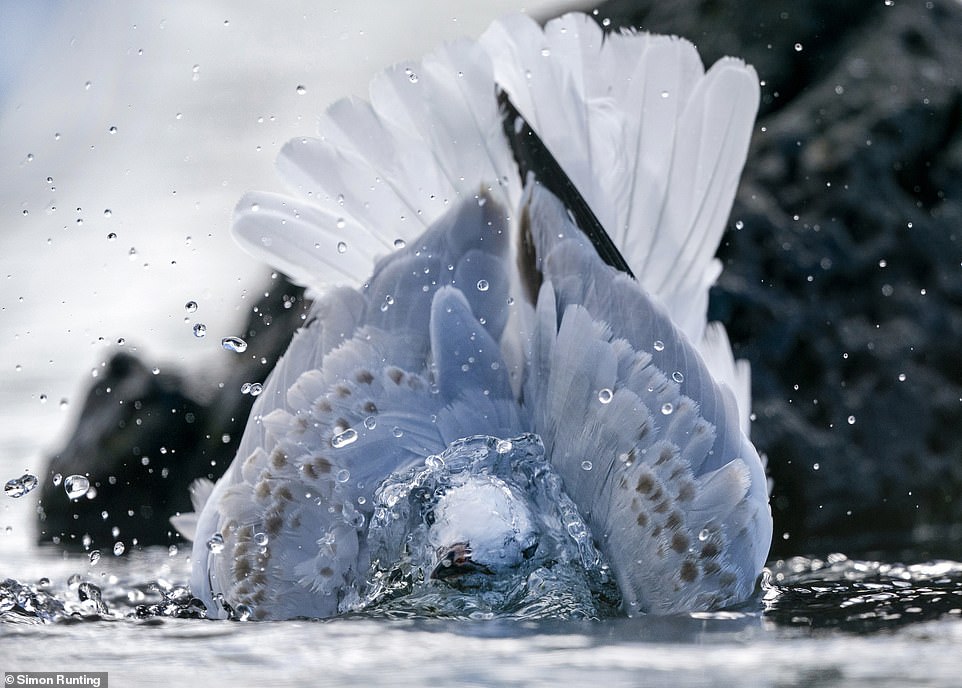 Photographer Simon Runting’s picture of ‘a red billed gull having a wash’, titled A Red Billed Gull Washing (pictured), took home first prize in the Nature category. The photographer is based in Auckland, New Zealand, and runs a commercial and editorial photo agency, called Onsite Images 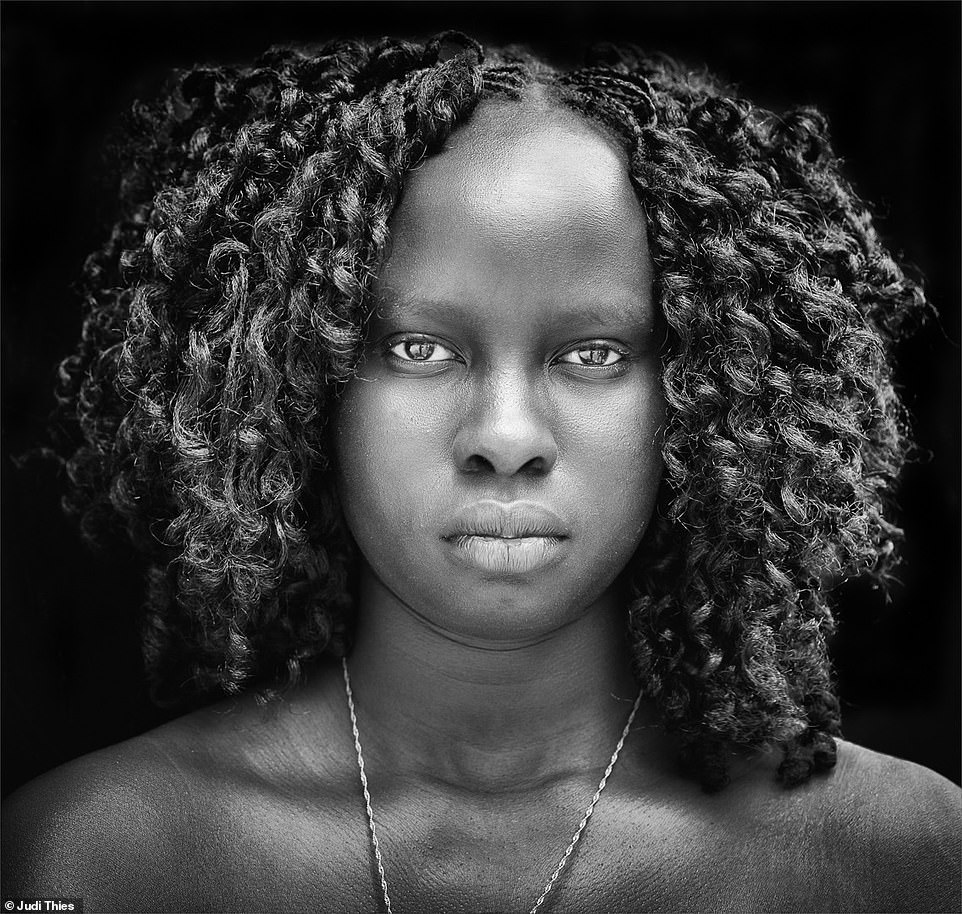 Photographer Judi Thies, of Adelaide, Australia, was awarded first place in the Portrait category for her beautiful picture of a young girl with curly dark hair, titled Achang (pictured). Taking to social media, Thies said: ‘So proud to win Portraiture Category in Sony Alpha Awards 2020. Thank you Acheng. You are beautiful’ 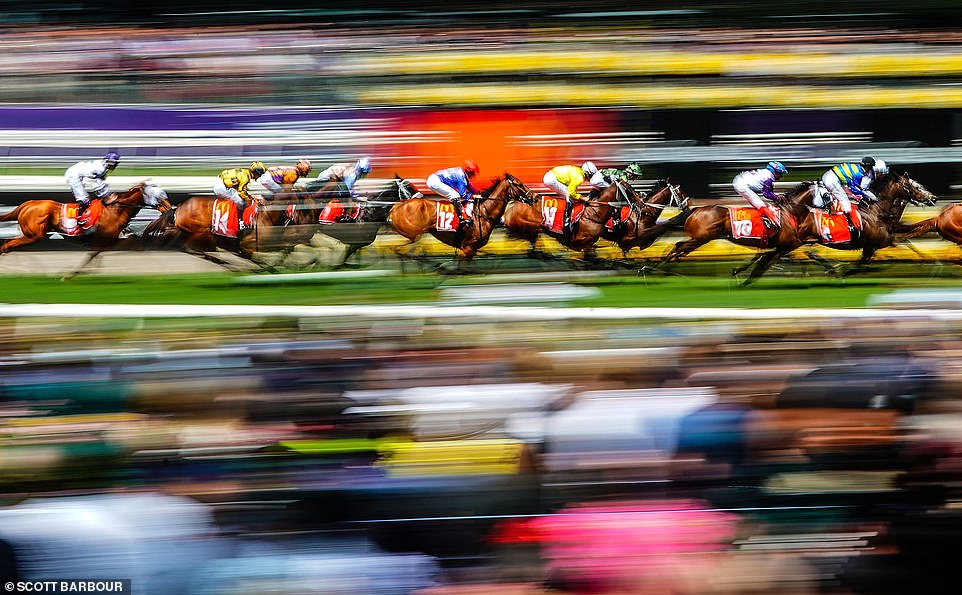 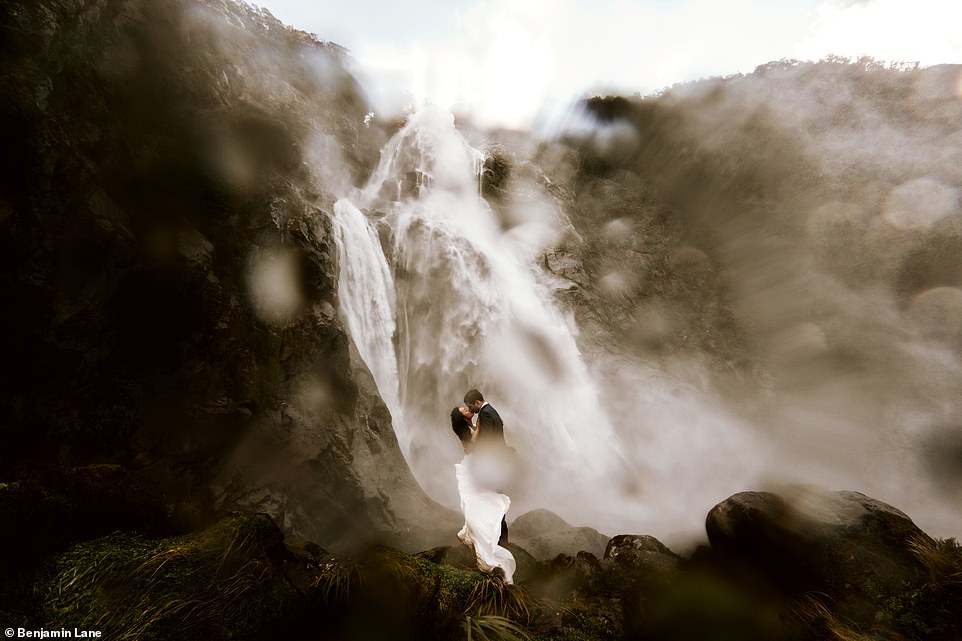 Photographer Benjamin Lane’s image of a couple embracing each other during a kiss on their wedding day was awarded first place in the Wedding category. The picture is titled Wild Love (pictured). The photographer is from Hamilton, New Zealand 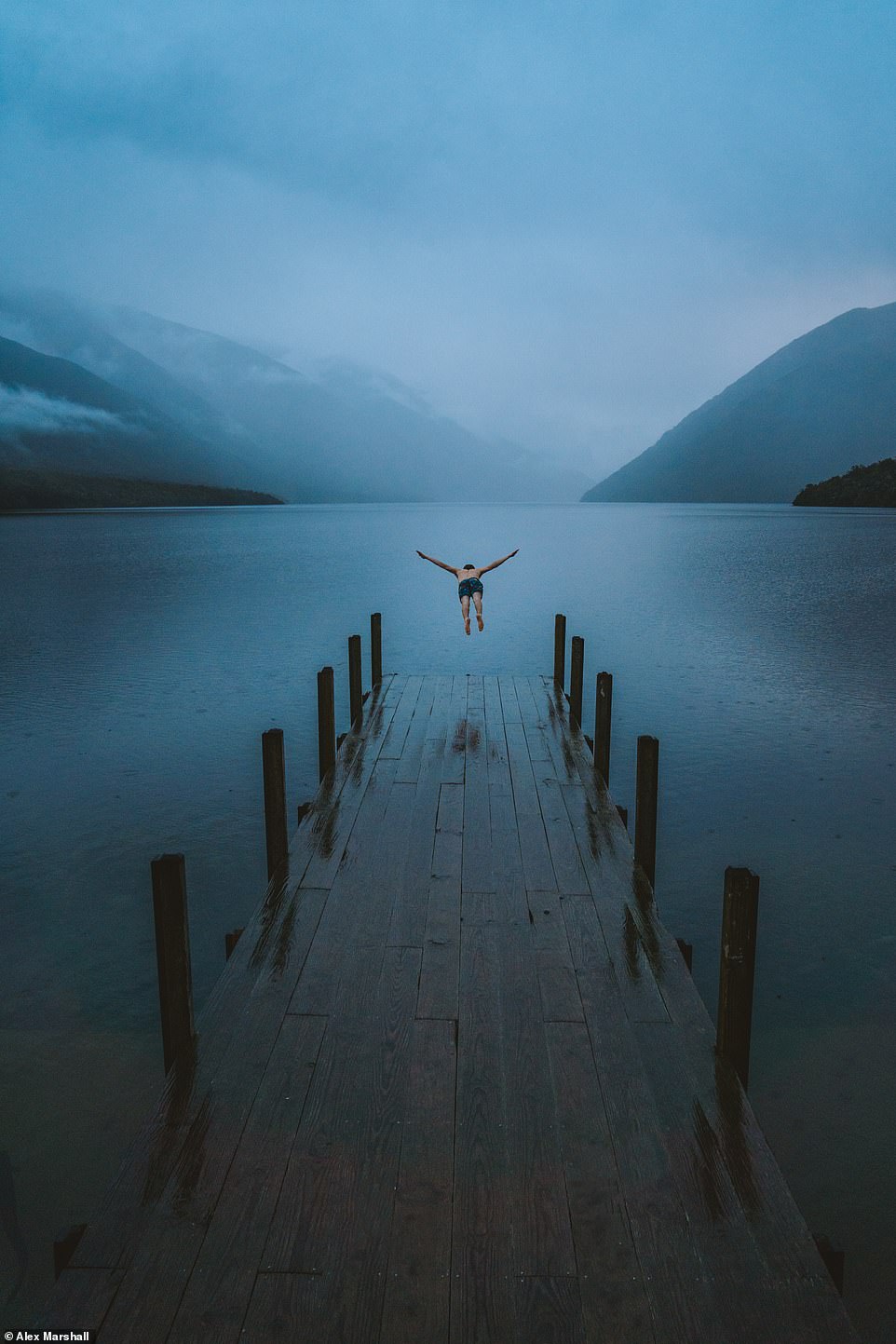 Photographer Alex Marshall, of Marlborough, New Zealand, is the winner of the Youth category for his picture of a man diving into a lake. It is titled A Celebration of Solitude (pictured)