Footy fans in one of rugby league’s biggest heartlands have erupted into wild celebrations after nearly four months in a gruelling lockdown, with Panthers stars themselves partying just as hard in raucous dressing room scenes.

Penrith are the pride of western Sydney after hanging on to defeat South Sydney in the NRL Grand Final on Sunday night.

The 14-12 victory was a bittersweet moment for thousands of Panthers fans after a heartbreaking Grand Final loss 12 months ago, not to mention the past four months in one of the world’s strictest lockdowns.

Sydney’s Covid outbreak forced this year’s decider to be played outside Sydney for the first time in the code’s history, leaving many fans no choice but to cheer on their beloved club from home.

As Penrith players celebrated with family and friends at Brisbane’s Suncorp Stadium, fans back home flocked to the streets in honour of the club’s third premiership since 1967.

It was also a night to remember for Panthers winger Brian To’o, who proposed to his partner, after pre-match controversies threatened to overshadow the game.

The Penrith Panthers have won their third premiership in 54 years, sparking wild celebrations back home in western Sydney 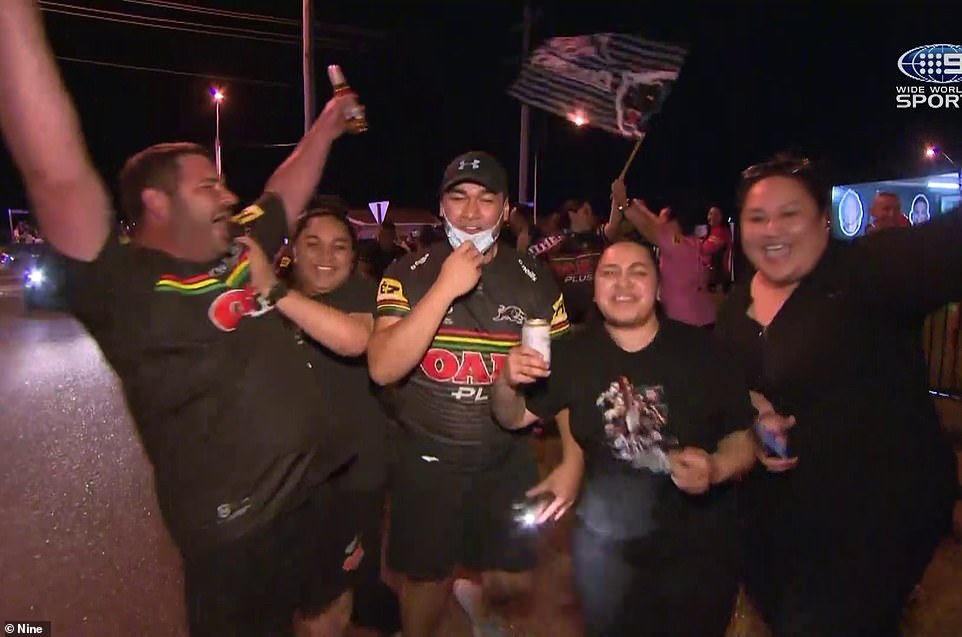 Panthers players kicked off the wild celebrations in the dressing room where footage has emerged of stars dancing in a huddle of flowing beer.

The Penrith and surrounding Blacktown regions were the among the worst regions hit by Covid and declared as hotspot LGAs, leaving fans forced to live under tough restrictions.

Blacktown has recorded 6164 cases since the start of the outbreak on June 16, while Penrith has had 2842.

But not even a 5km travel limit could stop Panthers fans from taking to the streets to celebrate.

It was a proud night for the 2770 postcode of Mount Druitt and surrounding suburbs with six Panthers stars hailing from the area, including the newly engaged To’o.

There were wild scenes outside the family home of Panthers five-eighth Jarome Liu in Mount Druitt, with footage emerging of dozens of motorists driving past honking their horns as jubilant fans cheered and danced in the streets while drinking cans of beer. 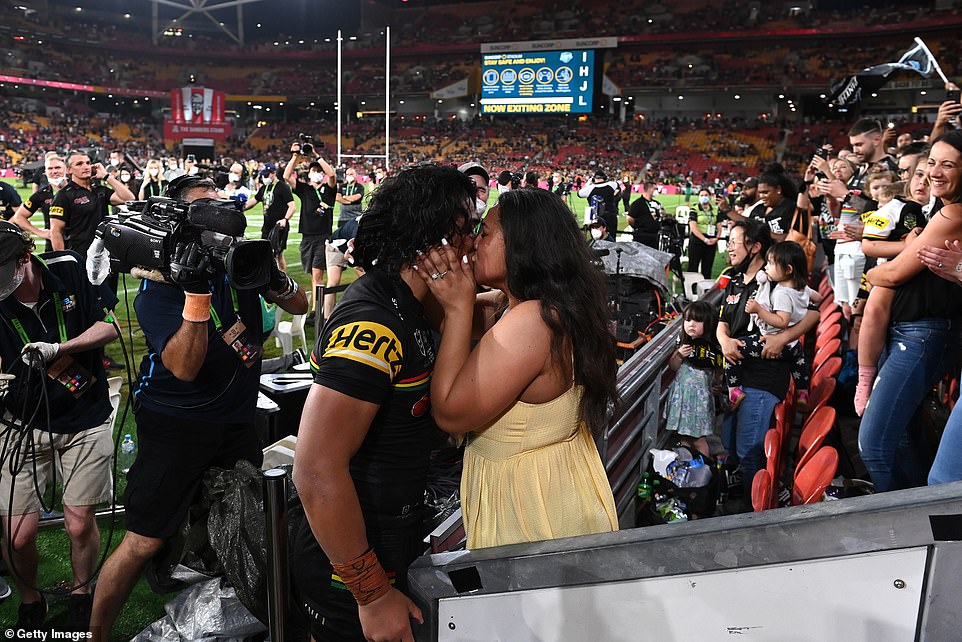 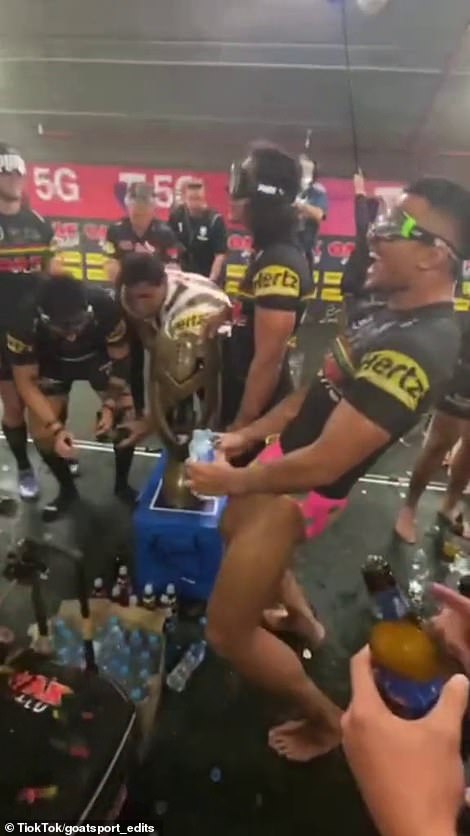 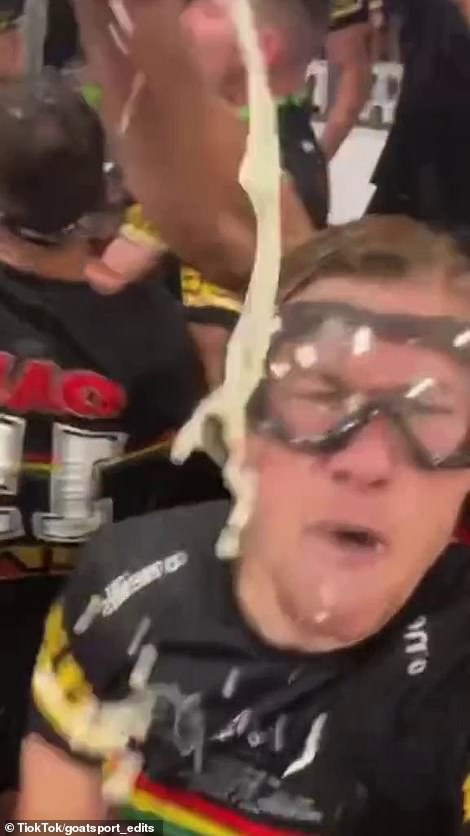 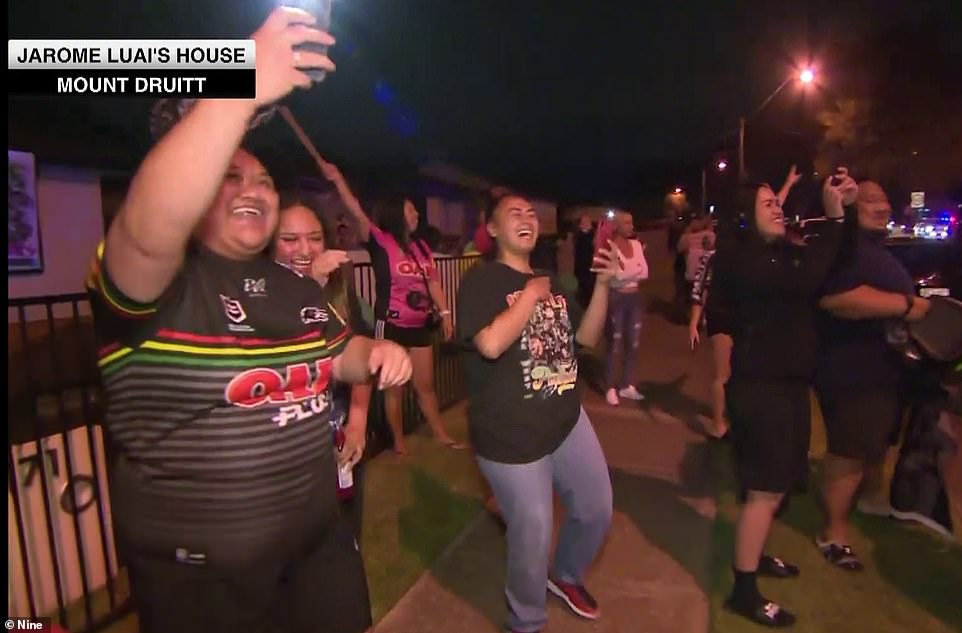 ‘It’s not just Jarome and Brian, it’s Stephen Crichton from St Clair, Tyrone May is from around that area, Moses Leota too.

‘They need something to look forward to these people and the way these young blokes have actually been proud, stayed and live in the area and speak fondly of the area.

‘This is the best thing that has happened in that area. It’s been incredible what these young blokes have done for Penrith.’

There were similar celebrations outside the Panthers club and down Penrith’s main strip of High Street.

Fans took to the streets in cars and on bicycles, waving flags, screaming wildly and letting off fireworks.

‘Cops in Penrith are doing a ripper job. Super crowd friendly and focusing on safety more than anything,’ one reveller tweeted.

The famous victory brought an emotional Panthers great Greg Alexander to tears and lost for words live on air on Fox Sports.

He described the last 10 minutes as the worst of his life. 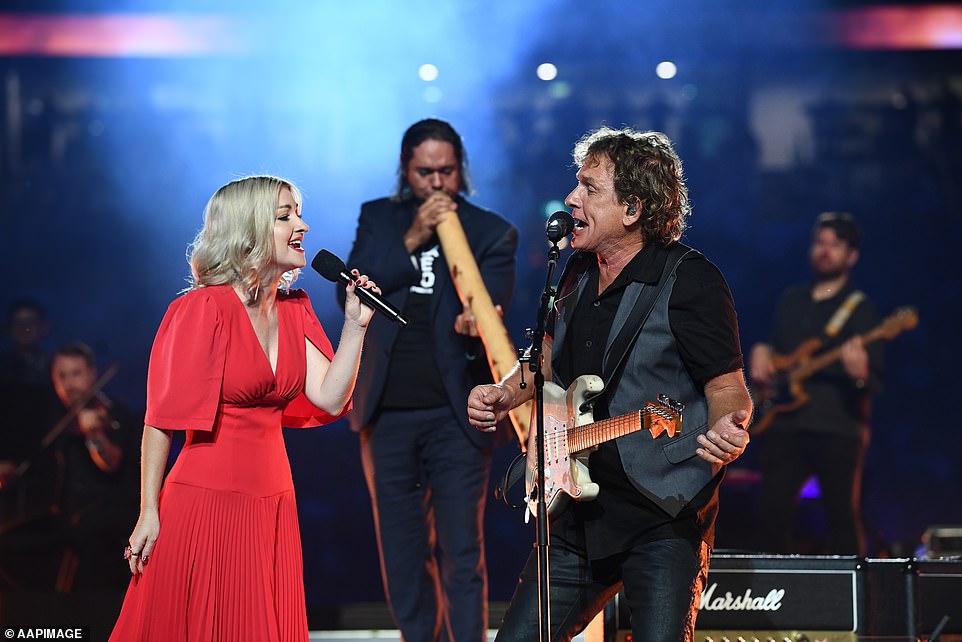 ‘I’m just so proud of them,’ the 1991 premiership star said as he choked back tears.

‘It’s overwhelming, it’s beautiful. It really is, I don’t know what to say.’

‘I cannot believe that they held on. We’ve spoken about their efforts through the finals series, to beat a fully-fit Melbourne side busted and to do it again tonight against Souths, who looked dangerous every time they touched the ball.

The Panthers look forward to celebrating with fans in a week’s time when Sydney is released from nearly four months of lockdown.

Panthers co-captain Issah Yeo dedicated the win to fans back home as he lifted the premiership trophy.

‘It means everything,’ he told Channel Nine.

‘We were sort of pushed aside in Sydney and we hope that we are proud to represent them it is bloody unreal.’

Co-captain Nathan Cleary added: ‘Every time we pull on the Panthers jersey we do it with pride. We are not just playing for us but for the whole community.’

The NRL decider was played outside Sydney for the first time in history due to strict Covid lockdowns, forcing thousands of fans to watch at home as the game went ahead at 75 per cent capacity in Brisbane.

At half-time, the Panthers led 8-6 after enjoying 60 per cent of possession, the 21st time this season they’ve been in front at the break – and have gone on to win each time. 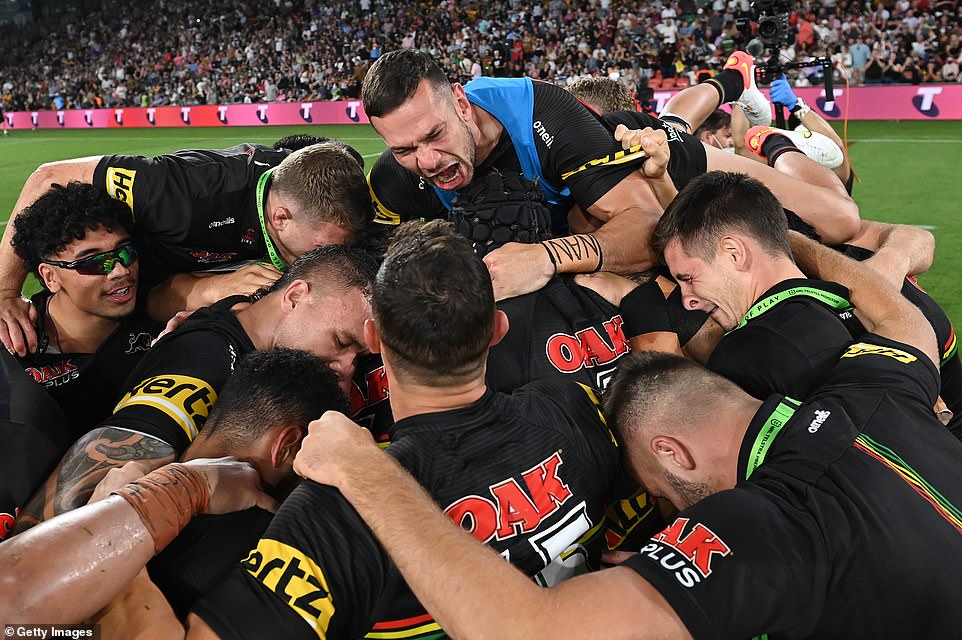 Penrith looked like they’d sealed the game with 13 minutes to go when winger Stephen Crichton pounced on a Souths intercept to score.

The Bunnies hit back minutes later with a try in the corner but missed the kick from the sideline before halfback Adam Reynolds’ unsuccessful attempt at a two point field goal with a minute to go sealed a Panthers victory.

As Panthers players embraced, To’o rushed to the stands to propose to his long-time partner Moesha Crichton-Ropati, cousin of his match-winning teammate Crichton.

The explosive pint-sized dynamo pulled out a ring as Moesha immediately said yes and she burst into tears as he put it on her finger.

He turned to his celebrating teammates and shouted: ‘She said yes!’

Two pre-match controversies earlier in the night threatened to overshadow what was a historic occasion for the NRL. 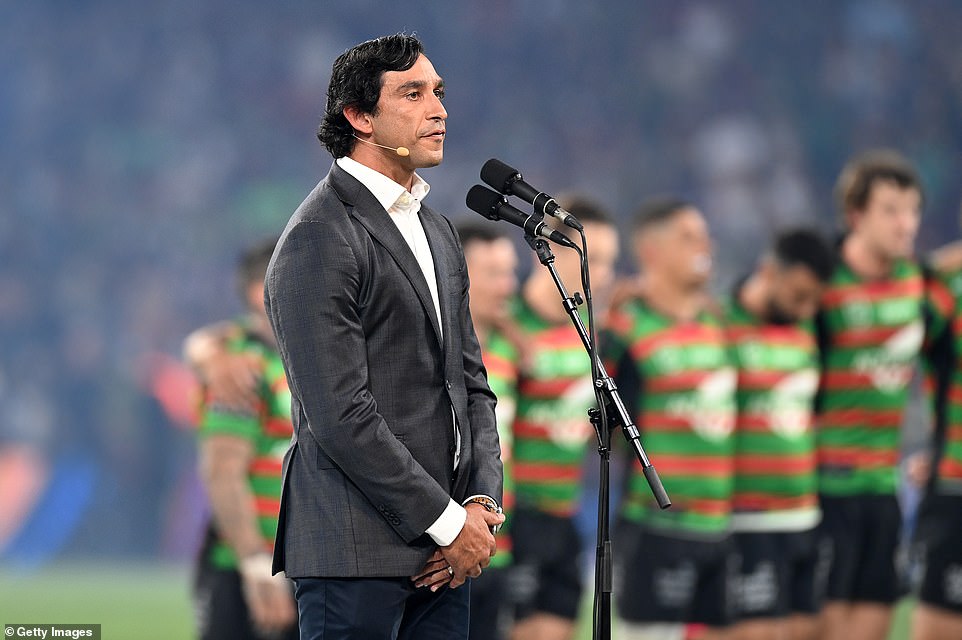 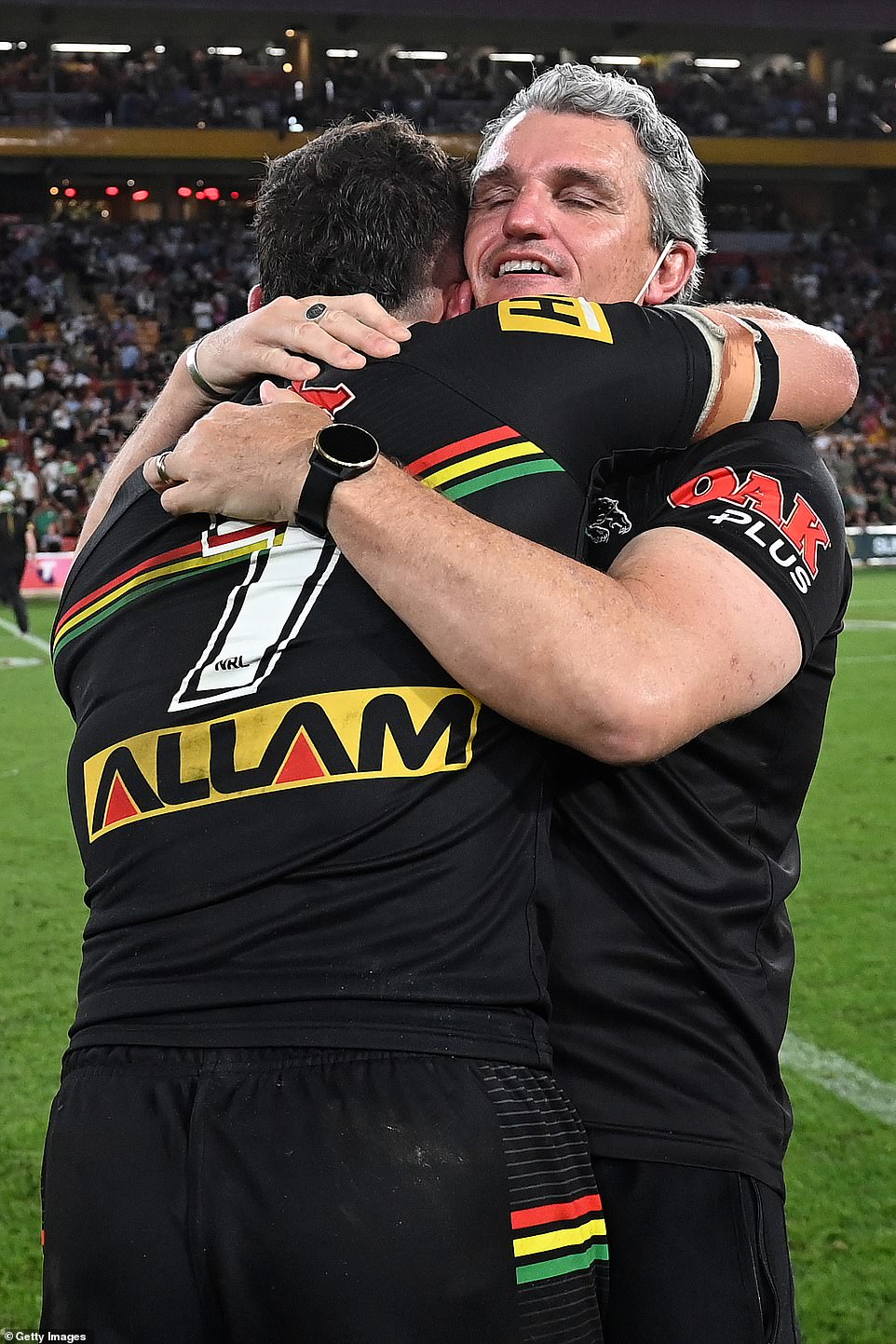 Some branded the pre-match show ’embarrassing’ while others went as far as describing it worse than Meatloaf’s infamous performance at the 2011 AFL Grand Final.

‘Can’t believe I’m saying this… Sheppard would have been better than 30 seconds of the Stafford brothers and Timmy f***ing trumpet,’ one person wrote, referring to Brisbane pop group Sheppard, who have performed at several sporting finals.

Minutes later, Queensland rugby league legend Johnathan Thurston was delivering the moving acknowledgement of Australia’s traditional land owners when he was awkwardly cut off by the playing of the national anthem, which was sung by Miller-Heidke.

‘Pretty atrocious to allow the Australian national anthem to cut off Jonathan Thurston’s acknowledgement of country at the #NRLGF,’ one person wrote.

Another sarcastically commented: ‘Maybe no one will notice that someone pressed the button to play the anthem before Jonathan Thurston had finished the Welcome to Country… we noticed.’

‘Starting the Australian anthem before JT had even finished Welcome to Country was absolutely disrespectful,’ a third wrote. 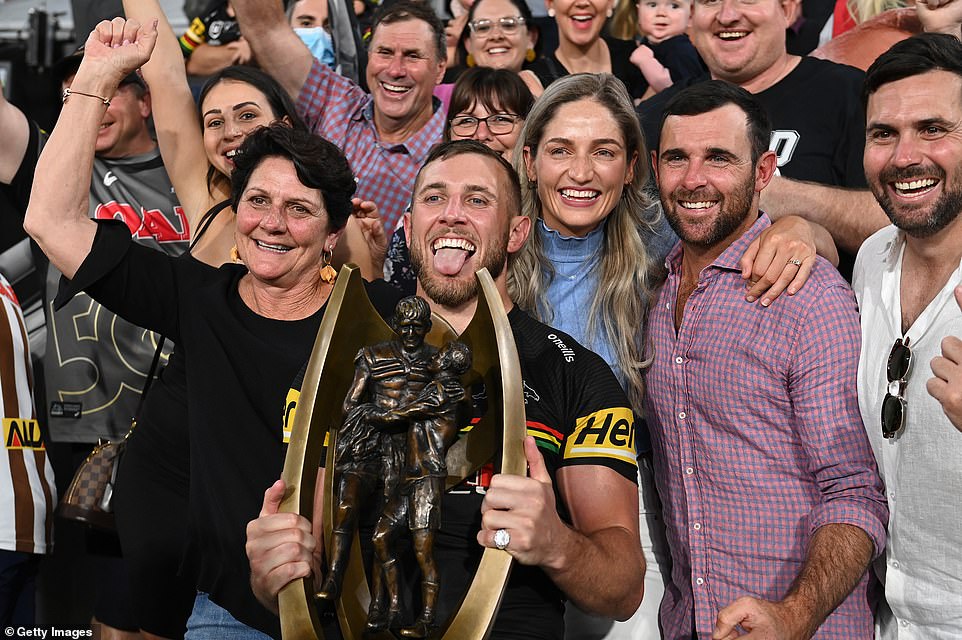