Elton John lead stars poking fun at 93rd Academy Awards on Sunday night, which looked a little different this year due to the COVID-19 restrictions.

The ceremony was held at Union Station, which is the main railway station in Los Angeles, and the unique production sparked some amusing comments from celebrities watching at home.

Speaking from his first-ever virtual fundraiser for the Elton John Aids Foundation, usually held in West Hollywood, the Rocket Man singer quipped: ‘The Oscar ceremony looks like it’s coming from a Starbucks somewhere.’

Nailed it: Elton John said this year’s Oscars set ‘looked like a Starbucks’ as he watched from home while hosting a virtual bash for his annual Elton John AIDS Foundation Oscars party 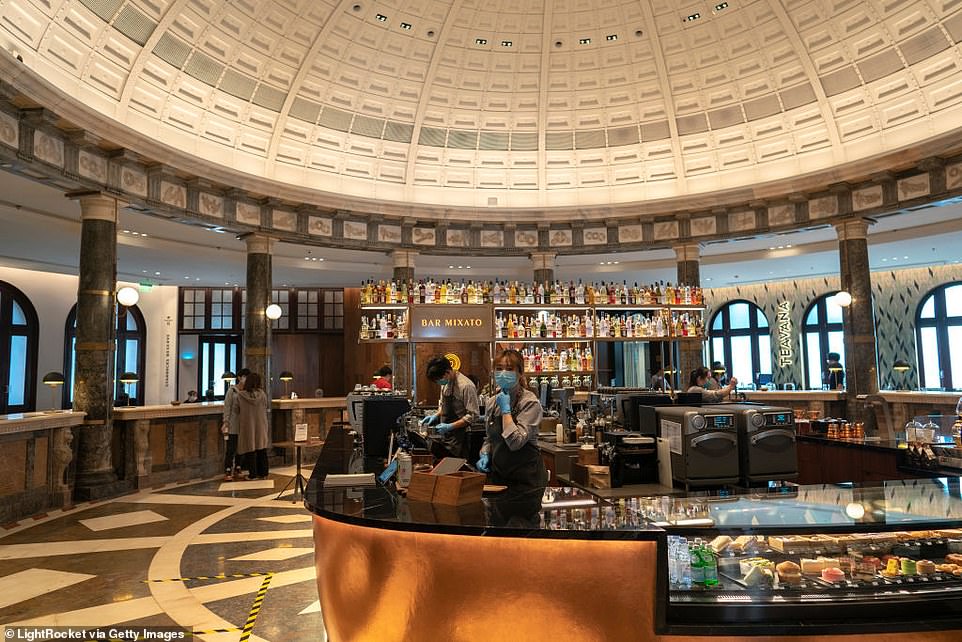 And the latte goes to: Elton compared the 93rd Academy Awards to a Starbucks

Later, when speaking with husband David Furnish, a flummoxed Elton added: ‘I still can’t get over the set.’

Twitter and SNL star Leslie Jones did not hold back, as she is known for, giving her opinion out on the event.

Leslie, 53, filmed her reaction as Mank’s Erik Messerschmidt said he would like to split his trophy for Best Cinematography into ‘five pieces.’ 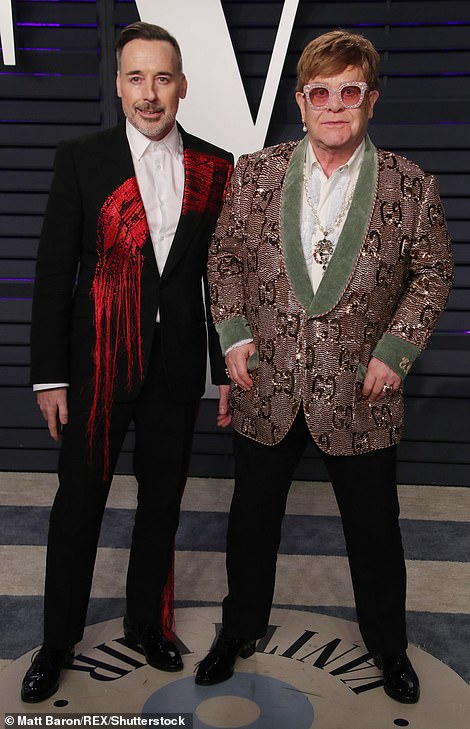 Skipping it this year: Elton John and David Furnish (pictured at 2019’s Vanity Fair bash) are usually in West Hollywood hosting their own party for the Oscars

‘But we really hope that you don’t cut it into five pieces because, Lord have mercy,’ Leslie said in her video. ‘Everybody done got up there and said about 17 minutes of a f*****g speech. It’s already in the Alcoholics-Anonymous-and-we-gonna-roast-each-other f*****g building. And you motherf*****s look scared as f**k.’

She went on, ‘Don’t get up there and do a three-hour speech. So no, you shouldn’t be able to cut it into five parts. Thank God and move on, son!’

Comedian Sandra Bernhard did not appear to be enthused with the ceremony either as she tweeted that she was ‘slowly losing my mind’ while watching the show.

Ricky Gervais lampooned the Academy for not having a host, and posted his controversial 2020 Golden Globes monologue, where he took aim at Hollywood stars, saying: ‘It’s the Oscars tonight, I wasn’t invited. Was it something I said?’

Modern Family producer Daniel “Danny” Zuker tweeted: ‘The producers of the Oscars have truly captured the pure joy and excitement of spending 3 hours in a train station.’

While actress Kiran Deol joked: ‘There is something insane about hosting the Oscars in a train station when people attend to do not take public transportation.’

The event marks the first time Tinseltown’s finest have assembled in over a year, for a three-hour show that co-producer Steven Soderbergh has described as being ‘like a movie.’ 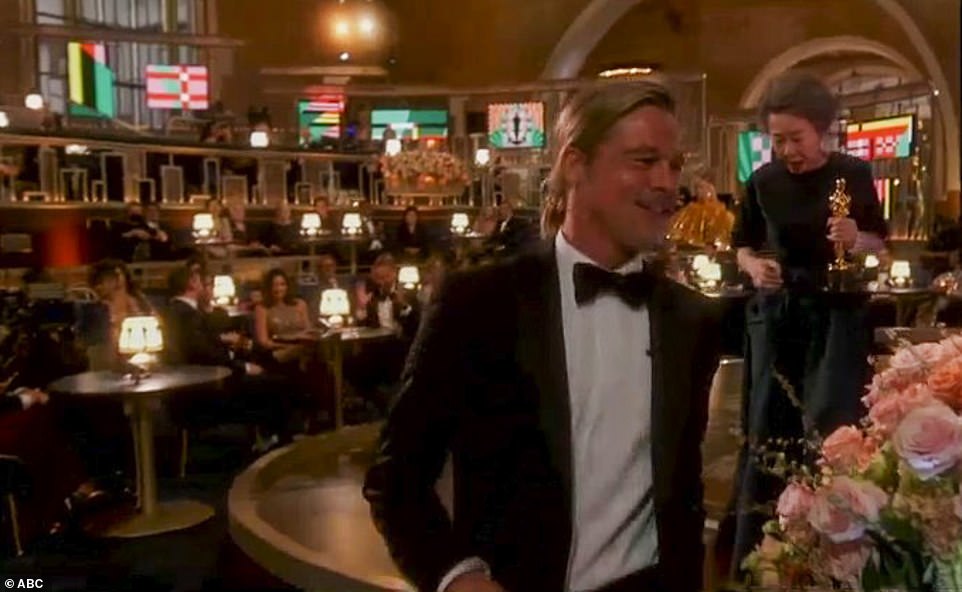 The main draw of Union Station was that socially distanced movie stars could go mask-free while on-camera or seated in the main show room.

Built in 1939, the national historic landmark and its main terminal is 161,000 square feet, creating plenty of room for theatrics on Hollywood’s biggest night.

During normal times, when COVID restrictions haven’t crimped travel, more than 100,000 people a day walk through its halls. 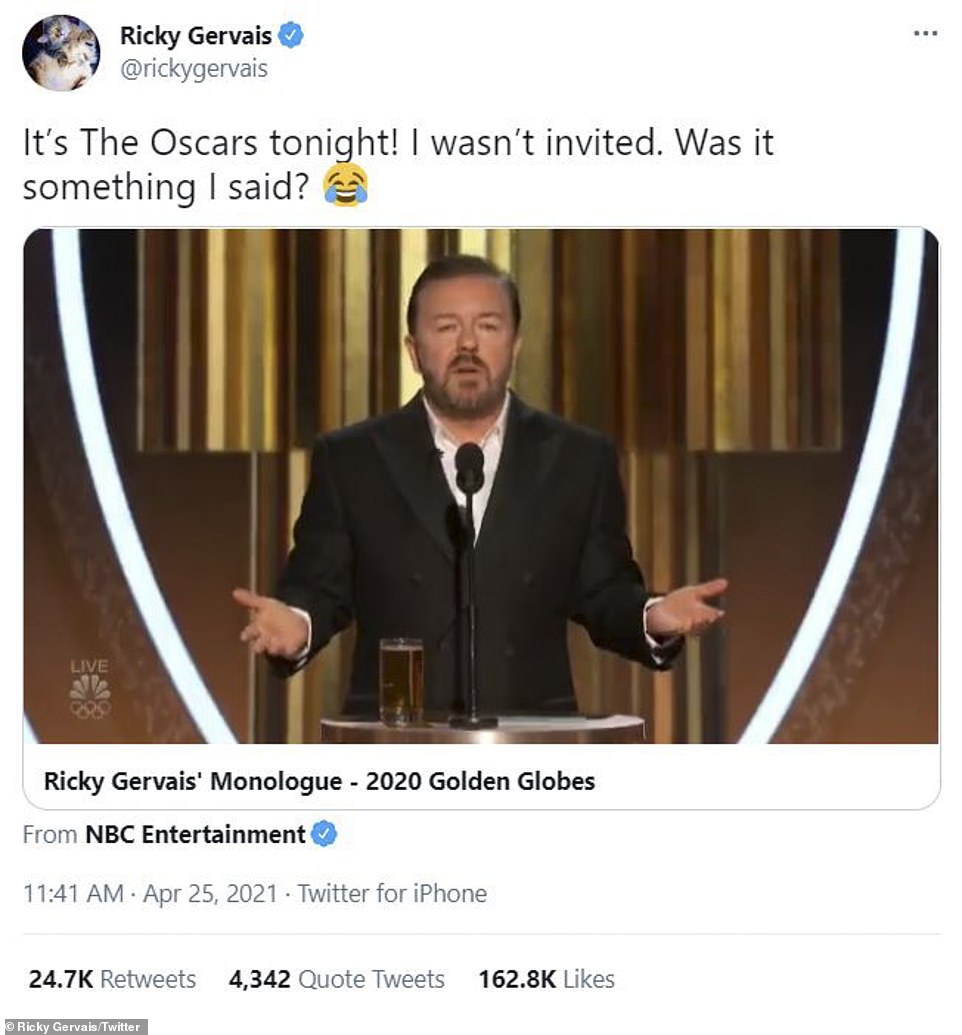 Too afraid? Ricky Gervais lampooned the Academy for not having a host, and posted his controversial 2020 Golden Globes monologue, where he took aim at Hollywood stars 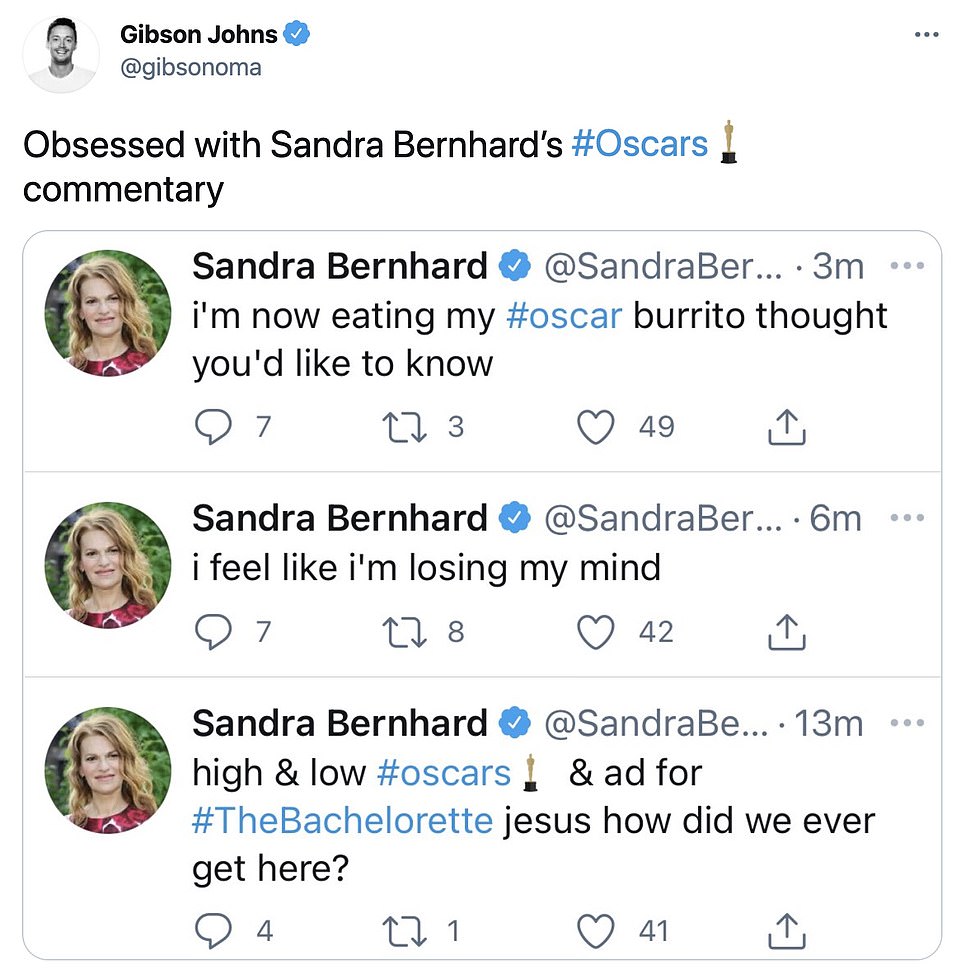 Not impressed: Comedian Sandra Bernhard did not appear to be enthused with the ceremony either as she tweeted that she was ‘slowly losing my mind’ while watching the show

No host: Stars like Billy Eichner took the opportunity to jibe the Academy over who they could have got to host the event 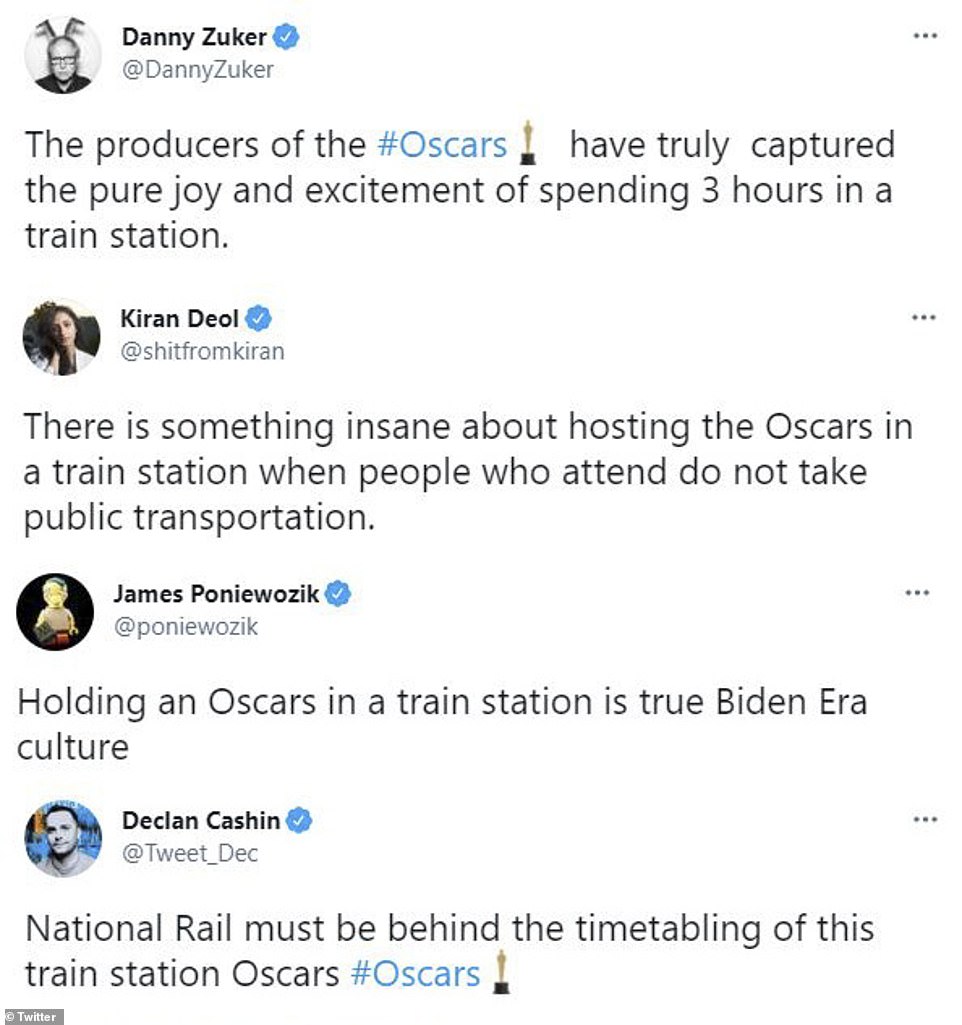 Trainwreck? Twitter stars sounded off about the Oscars being held in a train station this year

Comparatively the Dolby Theatre, where the glitzy event is usually held, can only seat around 3,300 people which would have created difficulties in putting on an award show amid the pandemic.

But in the spacious station, believed to be large enough to accommodate social distancing requirements with its soaring main hall featuring windows that are 40-feet high, stars have more room to mingle and maneuver.

Sticking to a ‘No Zoom’ policy unlike other shows that have taken place this awards season, Academy organizers have teased a ‘British hub’ for UK actors who are unable to make it in person, as well as another rumored ‘surprise location.’

Best Picture: The Trial of the Chicago 7 is one of the eight films nominated

Best Actress in a Leading Role

Vanessa Kirby – Pieces of a Woman

Best Actress in a Supporting Role

Best Actress in a Supporting Role: Olivia Colman is up for her role in The Father

If Anything Happens I Love You – WINNER

The Man Who Sold His Skin

Best Sound: Greyhound – a war film starring Tom Hanks – is up for the gong

H.E.R. – Fight for You – Judas and the Black Messiah – WINNER

Hear My Voice – The Trial of the Chicago 7

Speak Now – One Night in Miami…

Best Makeup and Hairstyling: Ma Rainey’s Black Bottom is vying for the award

Thomas Vinterberg – Another Round

Best Actor in a Leading Role

Best Actor in a Supporting Role

Sacha Baron Cohen – The Trial of the Chicago 7

A Shaun the Sheep Movie: Farmageddon

One Night in Miami…

Shaka King and Will Berson – Judas and the Black Messiah

Aaron Sorkin – The Trial of the Chicago 7

Best Writing (Original Screenplay): Judas and the Black Messiah is up for the gong

A Concerto Is a Conversation

A Love Song for Latasha

The One and Only Ivan