2021 will have an ‘above average’ number of hurricanes, experts warn, as season is starting earlier

There’s stormy weather ahead, according to the National Oceanic and Atmospheric Administration, which has updated its Climate Prediction Center to indicate an uptick in named storms and hurricanes.

While NOAA had been using the period between 1981 to 2000 as the 30-year period of record to make estimates about upcoming hurricane seasons, it is now shifting to 1991 to 2020.

As a result, averages for the Atlantic hurricane season have increased to seven hurricanes and 14 named storms per year.

Earlier analysis, taken from the period between 1981 to 2020, saw just six hurricanes a year and 12 named storms.

The average for major hurricanes—those classified as Category 3, 4 or 5—remained steady in both eras at three per year.

Averages for the Atlantic hurricane season have increased one hurricanes and two named storms per year. Pictured: In 2020, Hurricane Zeta covered more than 1,000 miles of land before losing power

NOAA updates its statistics once a decade to determine if a hurricane season is ‘above-‘ ‘near-‘ or ‘below-average,’ relative to the climate record.

‘This update allows our meteorologists to make forecasts for the hurricane season with the most relevant climate statistics taken into consideration,’ said Michael Farrar, director of NOAA’s National Centers for Environmental Prediction. 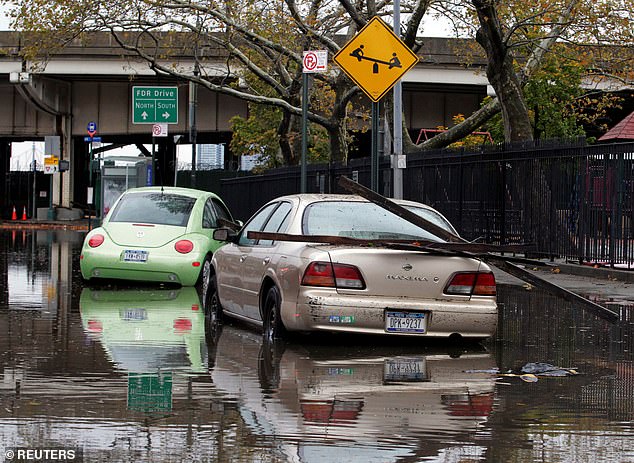 Hurricanes that make landfall now are taking longer to weaken—an average of 33 hours— compared to just 17 hours some 50 years ago. Pictured: Parked cars are partially submerged in flood waters in the aftermath of Hurricane Sandy in New York in 2012

While the increase may be attributable to warming oceans caused by climate change, researchers say it could also be due to better tracking thanks to improved technology and hurricane reconnaissance.

Rosencrans added: ‘NOAA scientists have evaluated the impacts of climate change on tropical cyclones and determined that it can influence storm intensity.’

The increase in Atlantic hurricane activity could also be caused by a presence of a positive Atlantic Multi-decadal Oscillation, a cyclical shift in sea temperatures that’s currently in a warmer-than-usual stage, NOAA added.

Other averages for the Climate Prediction Center will not change: the Eastern Pacific basin will remain at an average of 15 named storms, 8 hurricanes, and 4 major hurricanes, as it did from 1981-2000.

The Central Pacific basin will maintain an average of 4 named storms, 3 hurricanes and 2 major hurricanes.

NOAA’s initial outlook for the upcoming 2021 hurricane season predicts more ‘above normal’ hurricane activity in 2021, with a 70 percent chance of 13 to 20 named storms. 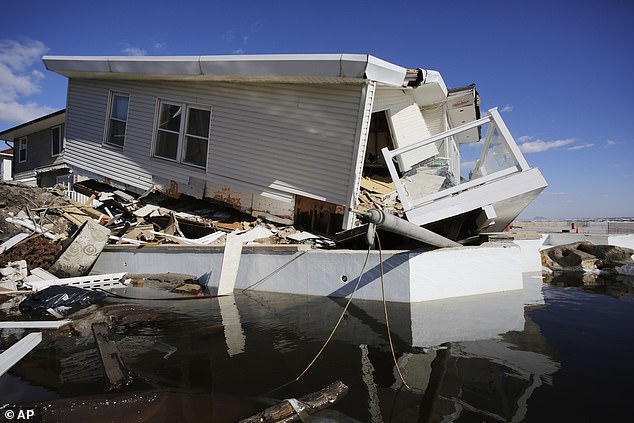 Of those storms, more than half will likely become hurricanes, the agency said, and as many as five could strengthen into at least a Category 3 on the Saffir-Simpson Hurricane Wind Scale, with winds in excess of 111mph.

Typically in a Category 3 hurricane, well-built homes lose their roofs and electricity and water is out for several days to weeks after the storm passes.

As much as meteorologists are considering whether the number of hurricanes is increasing, climate-change experts are more worried about their growing intensity:

A 2019 report from Yale Climate Connections reported hurricanes are stronger and more destructive than a half-century ago.

Hurricanes that make landfall now are taking longer to weaken—an average of 33 hours— compared to just 17 hours some 50 years ago.

Storms forming over warmer oceans are carrying moisture as they approach land, which gives them enough fuel to keep their strength after they come ashore.

As temperatures continue to rise, experts say, hurricanes will have the strength to move further and further inland before dissipating.

In October Hurricane Zeta cleared more than a thousand miles after touching down on Louisiana before losing steam.

In comparison, 1969’s Hurricane Camille traveled some 350 miles inland before downgrading to a tropical storm.

Hurricane season could also be starting early: Though technically it doesn’t begin until June 1, the National Hurricane Center has given a weather pattern emerging near Bermuda a 90 percent likelihood of growing into a ‘named’ storm this weekend, according to The Weather Channel.

If it does, ‘Tropical Storm Ana’ would be the first tropical storm of the 2021 Atlantic hurricane season.