After performing scans of 44 elite adult rugby players, experts found 23 per cent had abnormalities in brain structure, specifically in white matter and blood vessels of the brain.

White matter mainly comprises the neural pathways, the long extensions of the nerve cells, and is crucial to our cognitive ability.

The study also found 50 per cent of the rugby players had an unexpected reduction in brain volume.

Non-profit the Drake Foundation, which backed the study, is now calling for immediate changes in rugby protocols to ensure long-term welfare of elite players.

Contact sports including rugby already been under the radar for their potential to have irreversible effects on the brain and even lead to dementia.

There’s been a growing concern that contact sports can lead to long-term problems. Pictured, Scottish player Zander Fagerson during a match between the British & Irish Lions and DHL Stormers at Cape Town Stadium on July 17, 2021

The Drake Foundation has invested more than £2.2 million into researching the short- and long-term impact of sport on brain health in rugby and football.

‘I have invested in research into the relationship between head impacts in sport and player brain health for almost a decade because I have been concerned about the long-term brain health of sportspeople, including elite rugby players,’ said founder James Drake.

‘Common sense dictates that the number and ferocity of impacts, both in training and actual play, need to be significantly reduced.

‘These latest results add further support to this notion, particularly when coupled with existing findings across sport and anecdotal evidence.’

Drake said the game of rugby has ‘changed beyond all recognition’ since it was professionalised in the 1990s, becoming more dangerous.

‘Players are now generally bigger and more powerful, so we have to be mindful of all the ramifications that increased impacts will have on their bodies,’ he said.

‘Seeing younger players suffer with the consequences of that, I am not convinced that the game is safer now than it was when I started The Drake Foundation in 2014.

‘More must be done to protect players, and without delay.’ 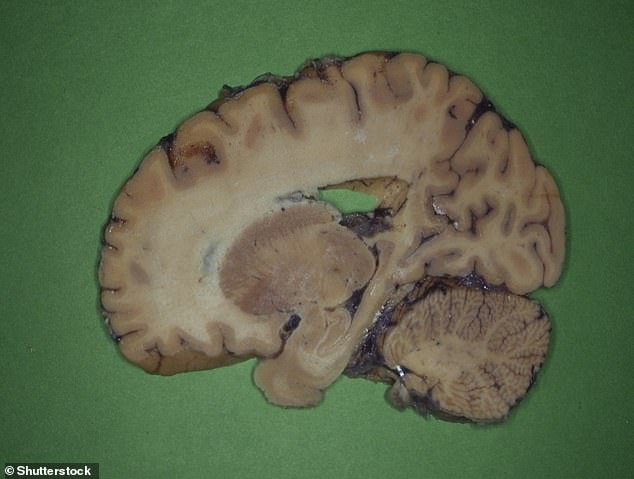 White matter, the paler tissue towards the centre of the brain, speeds up signals between the cells. Grey matter is mostly found on outer-most layer of the brain, or cortex, and serves to process information

Dr Virginia Newcombe at the University of Cambridge, who was not involved with the study, said there’s been a growing concern contact sports involving repeated blows to the head lead to long-term problems.

‘These may range from problems with mood and thinking, including in the most severe cases a type of dementia commonly known as chronic traumatic encephalopathy,’ she said.

‘So far the diagnosis of CTE has largely been made post-mortem – after death.

The study has involved the collection of blood, saliva and urine in an effort to uncover potential biomarkers of concussion injuries, as well as using advanced neuroimaging techniques and cognitive testing.

The project is investigating any changes associated with participation in elite rugby.

‘However, being able to detect injury while a player is still playing is key to be able to offer earlier advice and treatment, manage symptoms appropriately – as misdiagnosis is common – and improve the long-term outcomes of these players.’

The Drake Rugby Biomarker Study assessed 41 male and three female elite rugby players, all of whom had their data anonymised.

The research team used advanced neuroimaging techniques to look at the brains of the players in comparison with control participants.

Increased presence of small microhaemorrhages (bleeds) among the players may indicate damage, and potentially neurodegeneration – a loss of nerve cells – which is characteristic of diseases including Alzheimer’s and Parkinson’s.

Derek Hill, a professor of medical imaging science at University College London, who was not involved in the study, pointed out that brain differences might not be damage.

‘The MRI methods they use are sensitive to changes, but are not specific to the cause of the change,’ he said.

‘Brain scans can be changed by factors other than irreversible brain damage.

‘For example, dehydration and some medicines can result in change in fluid balance in the brain that can be picked up by advanced MRI.’ 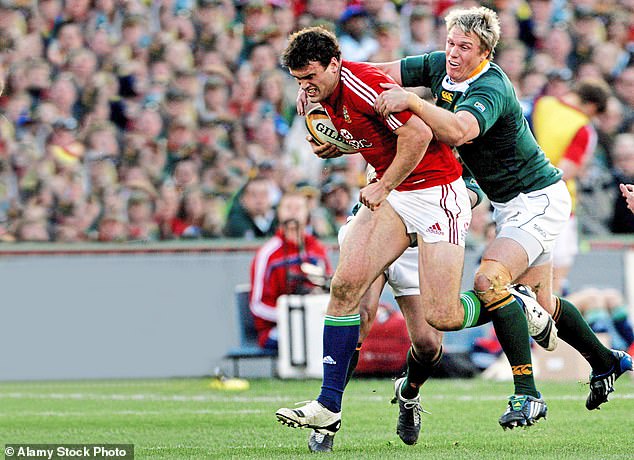 Rugby has ‘changed beyond all recognition’ since the 1990s, according to the Drake Foundation. Pictured, Jamie Roberts of the British and Irish Lions (left) with South Africa’s Jean de Villiers during the second rugby union test match in Pretoria, June 2009

Even if the results are indicative of brain damage, the long term implications of this damage ‘are not clear’, Professor Hill added.

‘A longer study would be needed to determine of the brain changes lead to harmful long term effects,’ he said.

As a contact sport, rugby does involve frequent body impacts and a risk of accidental head impacts, and therefore a significant potential risk of concussion.

In professional rugby it is 1 every 2-3 team games.

The rise in the rates seen since 2012/13 are almost certainly due to the increased awareness and the much lower threshold for suspecting concussion, and reflect the success of the awareness and education programmes, and media coverage.

But taken together with existing evidence and cases of rugby players being diagnosed with brain diseases in their 40s, the results paint ‘a concerning picture’ when it comes to the long-term brain health of players, she said.

‘The results of the Drake Foundation Rugby Biomarker Study are particularly concerning when taken in tandem with the wider current context,’ said Pulling.

‘Given today’s research findings, we believe that the need to take proactive, common-sense action to protect the health of rugby players is urgent.’

Updates to the game’s laws and protocols should further minimise players’ exposure to head impacts across matches and training, she added.

Former England rugby international, Lewis Moody said player welfare ‘is not always at the forefront of people’s minds’ in the game.

‘We need to ensure that everyone involved in the game, from Premiership to grassroots, is educated to ensure that the priority is focused on player welfare, rather than returning to competition,’ Moody said.

‘I would like to see a clear set of standards outlined across the game, from Premiership to grassroots, informing the maximum amount of contact training (and protocols around this) permissible per season.

‘From the findings released today, as well as the players coming forward with early signs of brain conditions, there is still much to do to ensure that the game, we love, is safe and enjoyable for all involved.’

The Rugby Football Union (RFU) has also announced today it will undertake more research into head impact exposure as well as plans to address the risks to rugby players.

Premiership players will participate in ‘instrumented mouthguard project’ – involving mouthguards with embedded devices – to measure movements of the head in matches and training.

It will also open a ‘Brain Health Clinic’ for retired retired elite male and female rugby players, due to start operations later in the year.

The specialist clinical service will be based at the Institute of Sport, Exercise and Health (ISEH) in London.

It will help assess and manage retired players between the ages of 30 and 55 who have concerns over their individual brain health.

The Drake Rugby Biomarker Study was funded and instigated by The Drake Foundation and published in the journal Brain Communications.

As athletes of all sports speak out about their brain injury fears, we run through the need-to-know facts about risks, symptoms, tests and research.

1. Concussion is a red herring: Big hits are not the problem, ALL head hits cause damage

All sports insist they are doing more to prevent concussions in athletes to protect their brain health.

However, Boston University (the leading center on this topic) published a groundbreaking study in January to demolish the obsession with concussions.

Concussions, they found, are the red herring: it is not a ‘big hit’ that triggers the beginning of a neurodegenerative brain disease. Nor does a ‘big hit’ makes it more likely.

In fact, it is the experience of repeated subconcussive hits over time that increases the likelihood of brain disease.

In a nutshell: any tackle or header in a game – or even in practice – increases the risk of a player developing a brain disease.

2. What is the feared disease CTE?

Head hits can cause various brain injuries, including ALS (the disease Stephen Hawking had), Parkinson’s, and dementia.

But CTE is one that seems to be particularly associated with blows to the head (while the others occur commonly in non-athletes).

CTE (chronic traumatic encephalopathy) is a degenerative brain disease that is caused by repeated hits to the head.

It is very similar to Alzheimer’s in the way that it starts with inflammation and a build-up of tau proteins in the brain.

These clumps of tau protein built up in the frontal lobe, which controls emotional expression and judgment (similar to dementia).

This interrupts normal functioning and blood flow in the brain, disrupting and killing nerve cells.

Gradually, these proteins multiply and spread, slowly killing other cells in the brain. Over time, this process starts to trigger symptoms in the sufferer, including confusion, depression and dementia.

By the later stages (there are four stages of pathology), the tau deposits expand from the frontal lobe (at the top) to the temporal lobe (on the sides). This affects the amygdala and the hippocampus, which controls emotion and memory.

3. What are the symptoms?

Sufferers and their families have described them turning into ‘ghosts’.

4. Can sufferers be diagnosed during life?

No. While a person may suffer from clear CTE symptoms, the only way to diagnose their CTE is in a post-mortem examination.

More than 3,000 former athletes and military veterans have pledged to donate their brains to the Concussion Legacy Foundation for CTE research.

Meanwhile, there are various studies on current and former players to identify biomarkers that could detect CTE.