A new DNA study published Thursday sheds fresh light on the horrors of the transatlantic slave trade, from the legacy of rape that can be seen in today’s genetics to how disease likely decimated some groups forced to work in deadly conditions.

For example, DNA from one African region may be under-represented in the US because so many slaves from there died of malaria on American plantations.

The grim results from a paper, which appeared in the American Journal of Human Genetics, compiled genetic data from 50,000 consenting research participants from both sides of the Atlantic.

It cross-referenced these with detailed records from slave ships that transported 12.5 million men, women and children between 1515 and 1865. Some two million died on the journey.

‘We wanted to compare our genetic results to those actual shipping manifest to see how they agreed and how they disagreed,’ Steven Micheletti, a population geneticist at 23andMe, which recruited most of the participants, told AFP.

‘And in some cases, we see that they disagree, quite strikingly,’ he added.

Disturbingly, the research team found that practices intended to ‘dilute’ black heritage, through policies that encouraged white men to have children with black women had a marked effect on the genetics of black Americans today.

They also found that far more Nigerians were brought to the US as slaves than previously thought, by way of slave trade ships coming up from the Caribbean, a part of black heritage that was previously little known.

The researchers found that while the genetic contributions from major African populations largely correspond to what they expected based on historic records, there are major exceptions.

For instance, most Americans of African descent have roots in Angola and the Democratic Republic of the Congo, in line with the major slave route.

But Nigerian ancestry was over-represented in African Americans in the US, probably because of the intra-continental slave trade which brought them from the Caribbean.

By contrast, there were fewer genetic connections between African Americans and the Senegambia region than would be expected given the number who disembarked on slave ships in North America.

The probable reasons are grim. 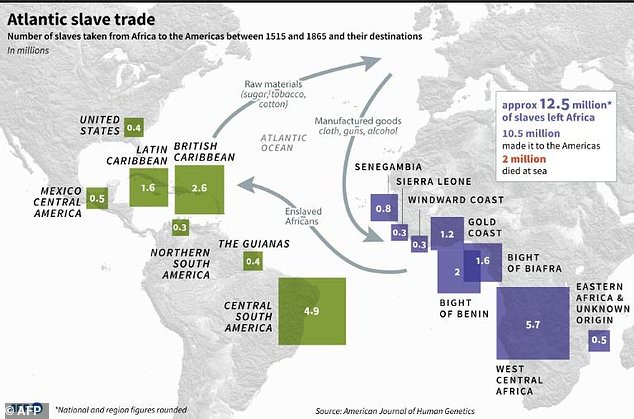 The study suggests that many more people enslaved in Nigeria were brought to the US than previously thought, via the Caribbean

‘Because Senegambians were commonly rice cultivators in Africa, they were often transported to rice plantations in the US,’ said Micheletti.

‘These plantations were often rampant with malaria and had high mortality rates, which may have led to the reduced genetic representation of Senegambia in African Americans today.’

In an interview with DailyMail.com, Dr Micheletti added that he and his co-authors hope their work in some way honors the approximately two million people who died on ships to the Americas that they were forcefully placed on after being enslaved. 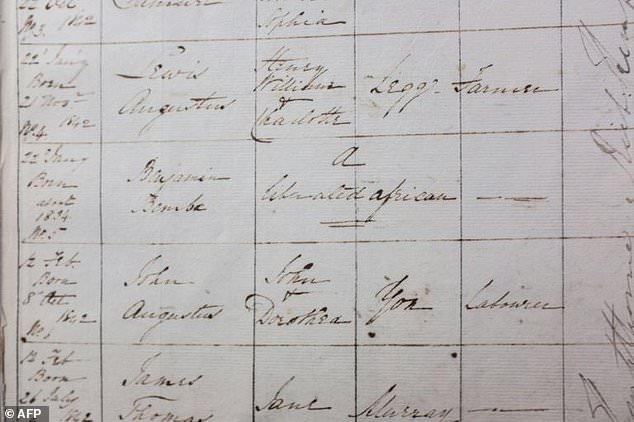 A picture taken on October 18, 2017 shows registers, documents and court records on seized slave trading ships, at the national Saint Helena Government archive in Jamestown in the British Overseas Territory of Saint Helena

Government and slave-owner practices had an enormous impact on African genetics too.

Despite the fact that more than 60 percent of enslaved people brought to the Americas were men, comparisons of genetics reveal a strong bias toward African female contributions in the modern gene pool of African heritage people across the region.

Much of this can be attributed to the rape of enslaved African women by white men, and other forms of sexual exploitation, like the promise of freedom if they birthed enough children.

But the imbalance is even more pronounced in Latin America, where 70 percent of the slaves who survived the ship voyages disembarked, compared to the United States, the new study showed. 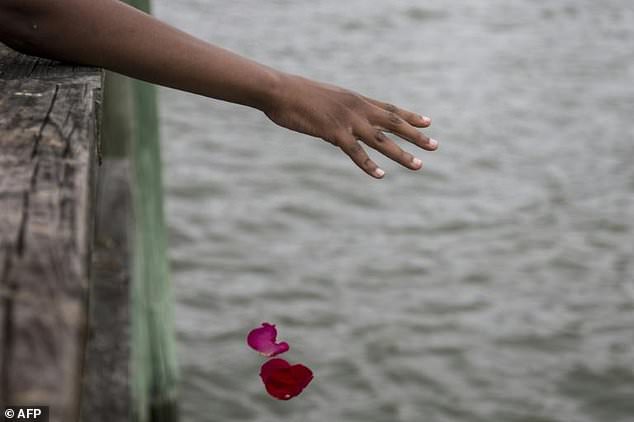 Guests take part in a flower petal throwing ceremony to honor Africans who passed away at sea during the Atlantic slave trade during the 2019 African Landing Commemorative Ceremony on August 24, 2019 in Hampton, Virginia. Some two million people died on ships set for the Americas where they were to be sold as slaves

In the US, slave-owners promoted marriages among slaves to ensure their children would form the next generation of the forced labor pool.

The existence of these practices was fairly well established in historical documents, but genetics add a layer of proof to their existence and consequences.

‘Genetics bring it to light and say that that was not just a story, it was a big enough event or practice to alter the genetics,’ study co-author Dr Joanna Mountain told DailyMail.com.

In countries like Brazil and Cuba, though, the governments implemented immigration policies in the 1900s, which involved women with African ancestry marrying whites.

These whitening or ‘branqueamento’ policies were instigated with the goal of altering the lineages of black people toward a supposed ideal of whiteness.

‘We have some regions that are essentially showing 17 African females reproducing for every one African male. We never expected the ratio to be that high,’ said Micheletti.

More men were enslaved than women, but the people who reproduced were overwhelmingly female.

In the British-colonized Americas, the ratio is closer to 1.5 or two African women for every African man contributing to the gene pool.

The researchers also found evidence of frequent mixing between enslaved indigenous people with enslaved Africans in Latin America, something which previous work has shown to be the case in the US.

The researchers said they hoped to not only help people of African descent find their roots, but also to understand the historic experiences that had shaped their genes today.