24 Hours in A&E viewers were left fuming last night after a mother brought her daughter to hospital with a tummy ache for emergency medical attention.

In last night’s episode of the Channel 4 show, a mother named Chanelle, 30, rushed her daughter, Amber, nine to the A&E of St George’s NHS Foundation Trust in South London, for fear that she had appendicitis after Amber complained of a tummy ache and started vomiting.

But it turned out that the little patient was completely fine, and was sent home after her blood tests came back ‘absolutely normal’ and being told she would be fine in a matter of days.

The mother-daughter duo’s relaxed attitude in the waiting room, where they joked with one another, did not impress viewers, since the department was so busy that patients were left waiting in ambulances. 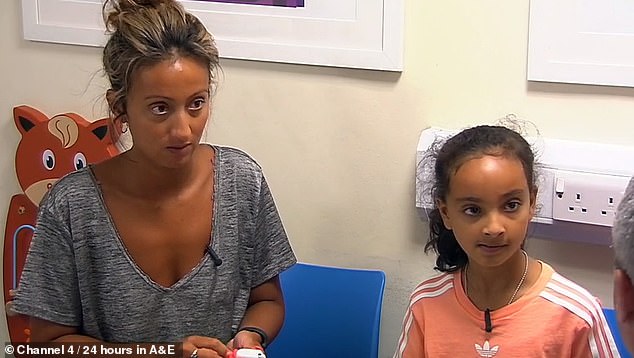 Mother Chanelle, viewers felt, wasted the tine of the already stretched NHS staff by going to the A&E for something that was not an emergency

When mother and daughter first arrived at A&E, viewers learned that Amber had suffered a stomach ache the night before and had vomited several times.

Anguished mother Chanelle was convinced her daughter was suffering from appendicitis, which was ‘very bad timing,’ due to Amber’s upcoming birthday.

Amber was disheartened that she might spend her 10th birthday in hospital after Chanelle told her it might take her a few days to recover. 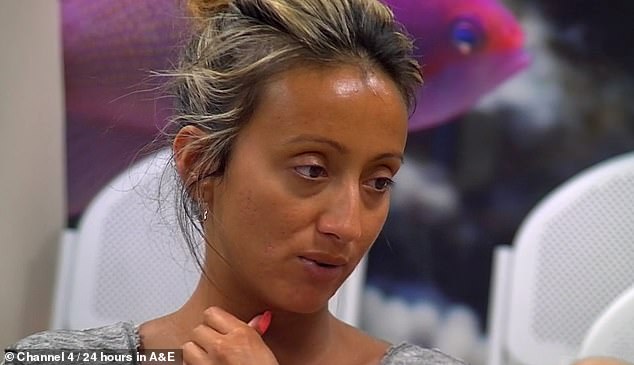 Mother Chanelle started by saying she was afraid Amber suffered from acute appendicitis, but later joked it was trapped wind 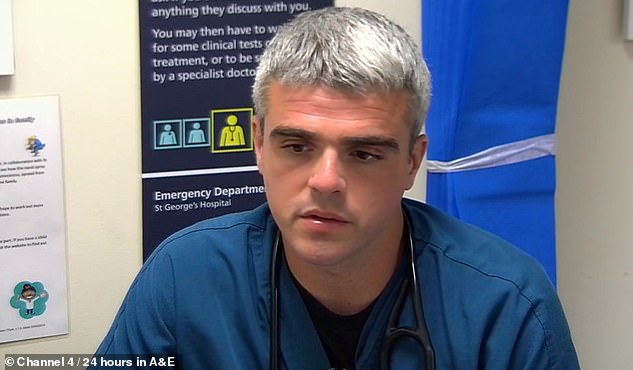 Chanelle and Amber were seen by Dr Martin (pictured), who took them to an exam room after their wait

But, as their wait dragged on because the department was so busy, the mother relaxed and joked that Amber might just be suffering from ‘trapped wind,’ which horrified her daughter.

After some time waiting and joking in the waiting room, the mother-daughter duo were eventually called into an exam room by Dr Martin, who proceeding to look into Amber’s symptoms.

He asked her where the pain came from, and patted her tummy after she complained her right side hurt. 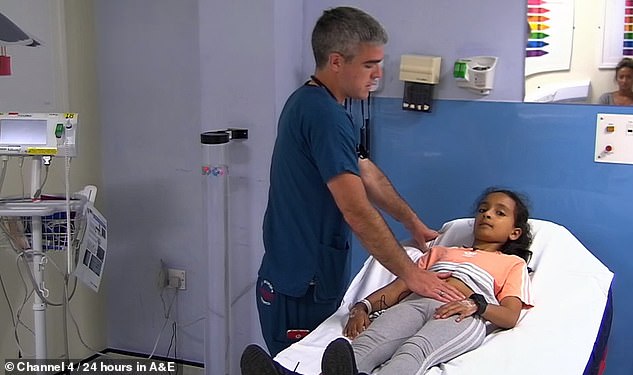 After the short examination, Chanelle and her daughter were sent back to the waiting room after Dr Martin recommended the child undertook blood test.

Chanelle and Amber spent their wait watching a movie on the waiting room’s telly, joking about their lack of house pets, which further angered fans of the show.

After about an hour-wait, they were called back to the exam room by Dr Martin, who had received Amber’s test results.

‘Your blood tests are back and they’re all normal so I had a quick chat with the surgical team anyways, and they’re happy that we let you on your away home,’ he said.

‘It’s unlikely to be acute appendicitis but that’s not 100 percent ruled out,’ he went on. 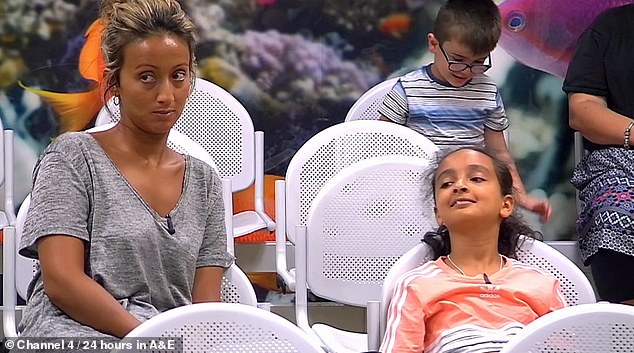 In the pediatric waiting room, Chanelle and Amber looked relaxed and joked around, which did not impress viewers

‘So if your symptoms get worse or if you get a fever, pop back and see us and hopefully it will settle down in a few days and you’ll be absolutely fine, I have every faith.’

Reassured Chanelle and Amber were sent on their way, skipping hand-in-hand in the street, but viewers felt the visit had been a waste of time, especially for the overworked staff.

When the episode started, fans of 24h in A&E were told it would be a busy day because the A&E phone kept ringing with incoming traumas.

Later on in the episode, Chris, an emergency care nurse, had to ask an incoming ambulance to ‘hold for five minutes,’ because the busy A&E department could not facilitate the patient they were bringing in.

‘And collectively, that’s actually not a big proportions of people that we see everyday, so it actually makes little difference.

‘In these cases you have less time to prepare and it can be very difficult to plan, but these patients are sick and they need help

The mother’s behaviour did not fly with viewers of the show, who felt she was wasting the staff’s time with a non-emergency.

‘Did Amber really need to go to A&E for a tummy ache? No wonder our resources are so stretched! Looks like mum is enjoying this time in front of the camera,’ an angered fan asked.

‘Amber and her mum demonstrating part of the reason A&Es are struggling. That was a GP appointment at best,’ said another.

‘Amber’s mum has been hanging round St George’s A&E for days with the kids and various trumped-up symptoms hoping to get on TV,’ claimed another.

‘People being referred to A&E when it really isn’t necessary, when there’s people lying on trolleys in corridors with serious health problems is such a waste of resources,’ said one.