25-year-old who fell for her boss, 55, defends age-gap romance

A 25-year-old student who fell in love with her 55-year-old boss has defended the age-gap romance against critics who insist she is just with him for money.

Mother-of-one Suzanna Diaz, from Lake Jackson, was just 22 and a student at college when she met restaurant manager Tony Kahanek while interviewing for a part-time job at his eatery.

During the interview process, Suzanna says the pair clicked right away, recalling how she was instantly attracted to his charming personality and kind eyes. Tony felt the same immediate connection and asked her for her number, while also offering her a job.

Unconventional: 25-year-old student and mother-of-one Suzanna Diaz has spoken out to defend her age-gap romance with her former boss, Tony Kahanek, who is 30 years her senior 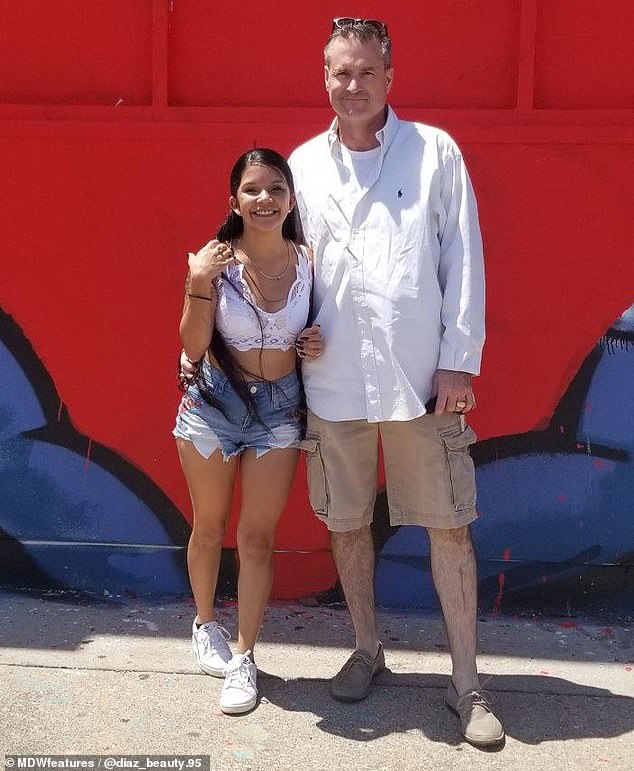 Together: Suzanna, from Lake Jackson, met Tony, 55, when he interviewed her for a part-time job at the restaurant he was managing 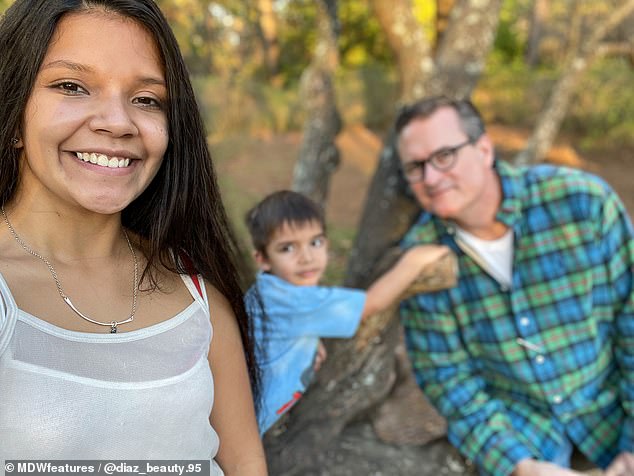 Connection: The couple felt an instant connection and started a relationship days later. They have since been together for three years, and Suzanna says Tony is ‘best friends’ with her son

Later that day, Suzanna says she started replaying their conversation over and over in her head, and couldn’t stop thinking about him that entire night.

Suzanna received a text the next day from an unknown number, which she was apprehensive to respond to, until she realized it was Tony – a few days later, they met up for dinner after work.

As they got to know each other a bit more, they found that they had a lot of similar interests and began sharing personal stories. Just before he dropped her home, they kissed and Suzanna recalled it feeling like a ‘whirlwind’ moment.

‘I was 22 years old when I decided to find a part-time job waiting on tables in my local area when luckily, a position opened up in a family restaurant near me,’ Suzanna said.

‘I rushed down there hoping to be one of the first to inquire so that I could secure the position as I was desperate for some extra money.

‘As I arrived, they asked me to sit in a booth and fill out an application form and just as I finished, I felt someone tap on my shoulder.

‘I turned around to see a tall, charming man, whose eyes sparkled before me – I was fixated on how handsome he was.

‘I regained focus and he introduced himself as Tony, the general manager of the restaurant, and we began talking – until I realized the time and knew I needed to get home.

‘My heart was still pounding with excitement as I couldn’t believe how infatuated I was with someone who I barely knew, until the next day when I received a text from him. 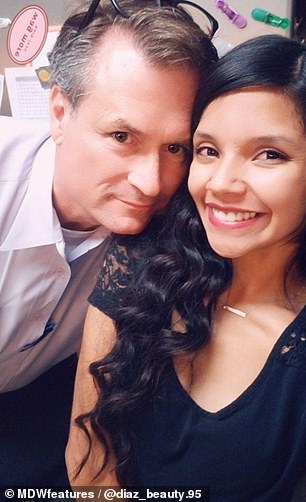 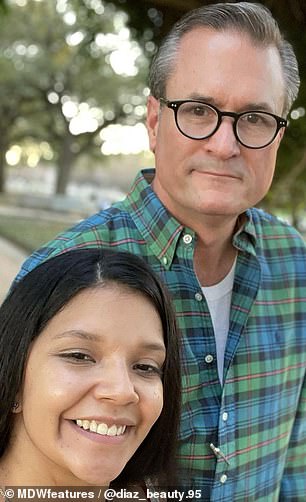 Caution: While Tony’s mother accepted their relationship immediately, her parents took a little longer to get used to the idea 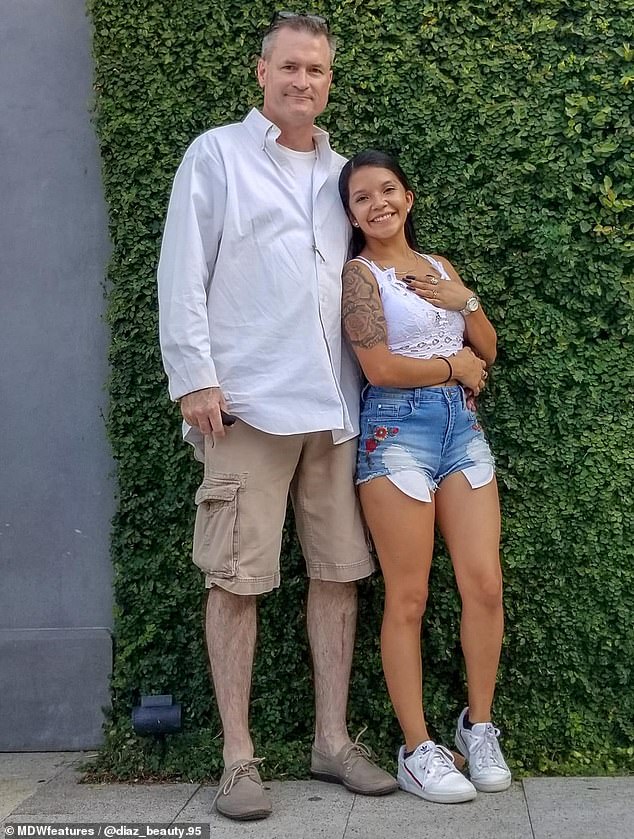 Criticism: Some of Tony and Suzanna’s friends have accused her of being a ‘sugar baby’ who is only with her older partner for money

‘We spoke on the phone until late in the night when Tony suggested meeting up a few days later after work for a bite to eat.

‘As soon as I saw him, my heart started beating fast again and that’s when I knew that I had fallen in love.

‘We spoke about our favorite music, our favorite food, even our favorite TV shows and found that we had a lot of similarities, which was surprising considering there’s thirty-years between us.

‘I found his charisma attractive as well as his leadership in the workplace – I love a man that can take control.

‘Tony dropped me back home and before I could say goodbye, we kissed. I felt a magical feeling like never before – it was like what you see in the movies.’

Despite falling head over heels for one another from the start, the couple decided to keep their relationship a secret in order to avoid any negativity from friends and family.

After just a few months of working together and speaking every day, Tony asked Suzanna to move in as he wanted to come home to her at the end of the day and the two couldn’t be more excited to start their new chapter together.

Although she was thrilled, she knew this meant that she had to tell her parents about their relationship and she was nervous about how they would react.

Initially, the pair were apprehensive about the romance, and asked their daughter whether she was truly serious about pursuing a long-term relationship with Tony. However Suzanna says that they slowly started to come around and accept her partner into their family after seeing how happy she was.

Tony’s mom on the other hand accepted their relationship straight away and hopes that the two will one day get married and start a family together.

‘We told our parents, with mine being apprehensive at first, but supportive after seeing how happy we both were,’ Suzanna said.

‘Tony’s mother was over-the-moon and hasn’t stopped talking about us getting married, even though this isn’t on the cards just yet – but we’ll see this year.’

But not everyone has been so willing to accept the relationship. 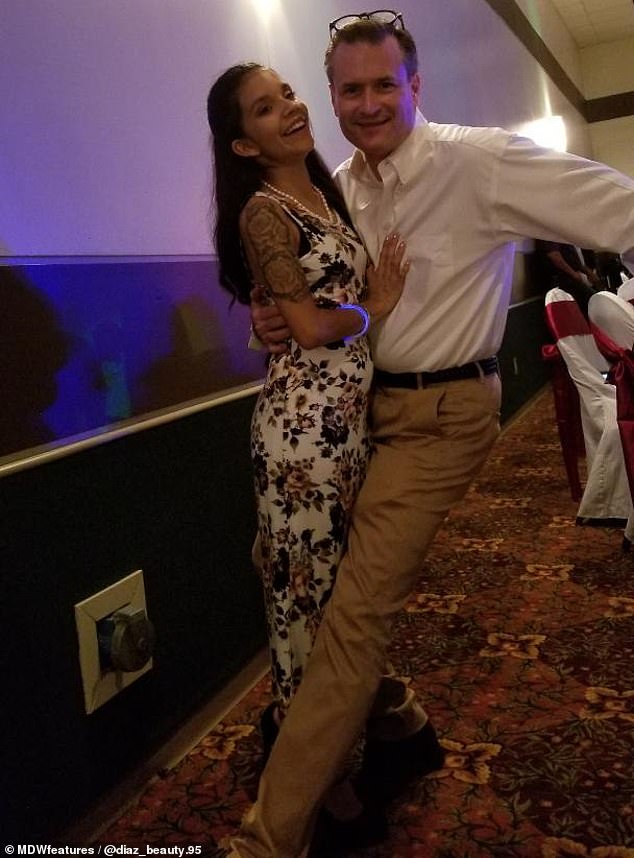 Special: ‘I feel like I am experiencing a fairytale romance and have met my soulmate, something which I thought I would never have, especially at so young,’ Suzanna said 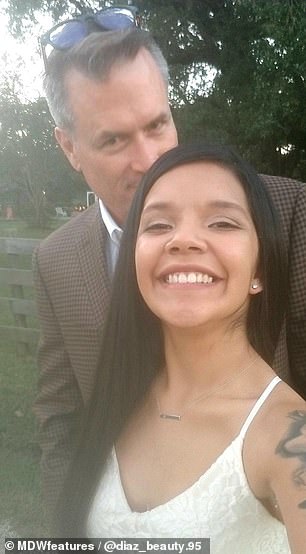 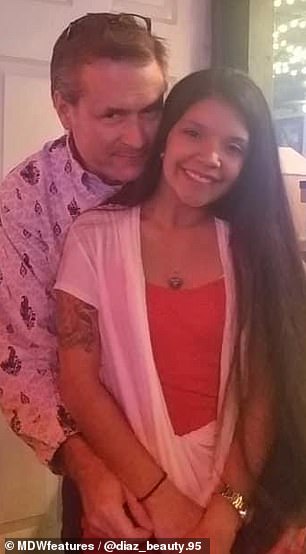 Looking ahead: The couple live together and hope to get married in the future 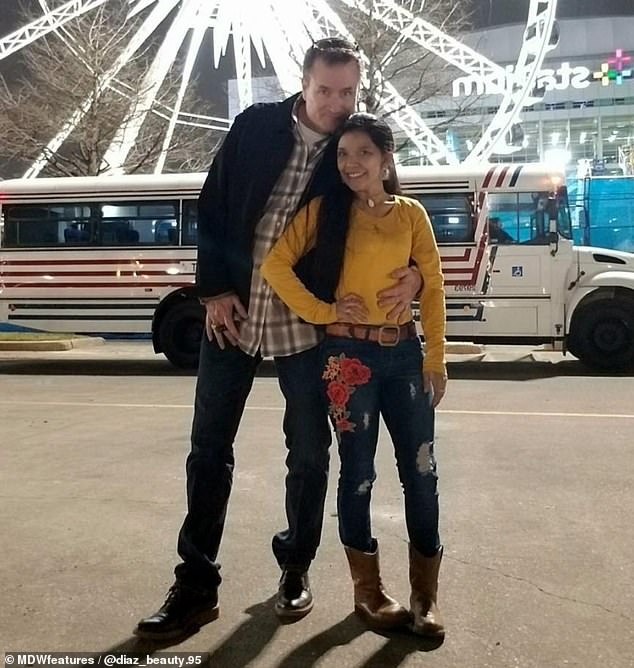 Several of Tony and Suzanna’s friends haven’t been very supportive, with a couple of them shooting weird looks at the couple – which has prevented them from displaying any kind of intimacy around their pals.

Others have made comments such as how Suzanna must be a ‘sugar baby’ – but they have learned to ignore them, as it doesn’t matter what they think.

‘Most of our friends have been supportive, bar a few, who have made comments that I’m only a “sugar baby” and how we’re not in a serious relationship – but these comments and the stares we get from others are just a mere bit of negativity that we choose to ignore,’ Suzanna explained.

‘After a few months, we decided that we wanted to move on to the next chapter of our relationship and I began packing up my things to move in with him.

‘I moved into Tony’s apartment and although I was scared at first, as I thought that living together so soon after meeting might put a strain on our relationship, I couldn’t have been more wrong.’

Despite the age gap between them being new at first, neither Tony nor Suzanna have an issue with it, with Tony commenting how it’s helped his confidence level.

Suzanna thinks that being with a mature man is more reassuring than being with someone her own age and feels a greater sense of appreciation from him. She added that her young son even views Tony as his ‘best friend’.

Now, three-years later, the two are the happiest they have ever been and have started to discuss their future together.

‘We get on perfectly together and right now, three-years later, we’re the happiest that we have ever been and have started to discuss our future together,’ Suzanna said.

‘I feel like I am experiencing a fairytale romance and have met my soulmate, something which I thought I would never have, especially at so young.

‘I wish people would understand that a relationship can come from anywhere and can be with someone who you would least expect.

‘Our relationship feels so natural for us and I believe this is because we choose to listen to our hearts rather than the opinions of others.

‘Only you know the direction you want to take your life – if the relationship fits within this, then that’s all that matters. There is so much happiness that a lifelong partner can bring, don’t miss out because of a minor taboo.’