A local humane society is offering a $2,500 reward for information leading to the conviction of a suspect who tossed a dog onto an interstate with its legs bound with duct tape.

The female pit bull, dubbed Faith by the Webster Humane Society, did not survive injuries sustained on Interstate 20 near Minden, Louisiana, the group said on Saturday.

The perpetrator threw the dog from a car in the eastbound lanes near the Goodwill Road exit, where cars ran over and dragged the bound animal down the interstate.

A Webster Parish sheriff’s deputy was first to come across the injured animal, and rushed it to get veterinary care at the Claiborne Animal Clinic.

A female pit bull dubbed Faith (left) was thrown onto the interstate in Louisiana with its legs bound with duct tape (right). A $2,500 reward is offered to find the perpetrator 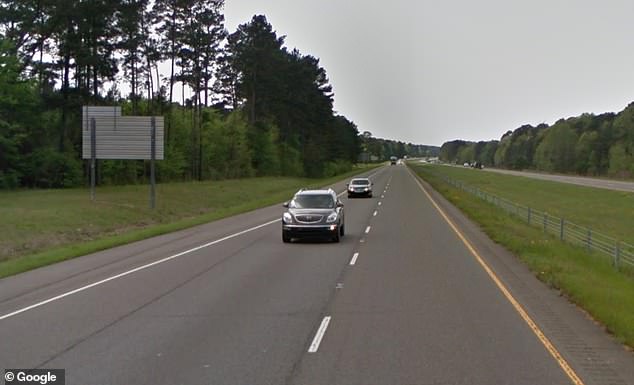 Faith was found on this stretch of Interstate 20, near the Goodwill Road exit in Minden

Unfortunately, Faith had suffered multiple skull fractures and numerous other injuries, and did not survive.

‘Was it not enough to throw her out on the street?’ the Webster Humane Society said in an outraged statement directed at the perpatrator.

‘You had to duct tape her legs together and throw her out on interstate where she would be run over and dragged by cars!’

‘No animal could ever do anything to warrant this type of cruelty. The person(s) responsible are monsters,’ the group said. 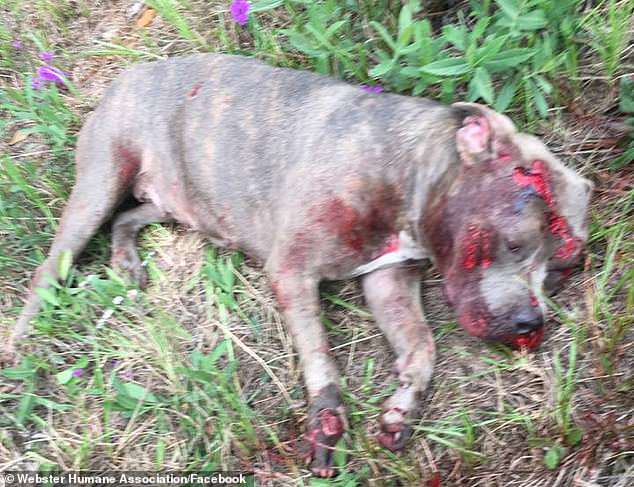 Veterinarians did all they could to help Faith, but the dog’s injuries were too severe to survive

The humane society said that every effort had been made to save Faith and comfort the dog’s suffering at the end.

‘She knew a gentle touch in her last hour,’ the group said.

Aggravated cruelty to animals carries a penalty of up to 10 years in prison in Louisiana.

Anyone with information about the case is urged to contact the Webster Humane Society confidentially at 318-377-7433 for a potential $2,500 reward.