A group of 26 ambitious homeowners are hoping to sell their properties as one big ‘super site’ to maximise their profits.

The residents in Baulkham Hills, in Sydney’s north-west, have joined forces to create what they are calling  ‘Hillsview Central’, a site almost two hectares in size.

The plan is the result of a year-long deal among the neighbours, who are hoping to get more than $60million for the deal.

The residents in Baulkham Hills, a north-western suburb of Sydney, have joined forces to create ‘Hillsview Central’ (pictured), a site almost the size of two hectares

The residents believe combining the properties into one larger block will increase the chances of it being rezoned for high density living, Domain reported.

The neighbours are also hoping to get more money for the group deal than they would for individual sales.

‘I don’t think we’re greedy, we just believe it will probably give us the best opportunity,’ homeowner Ann Papas said.

The average median house price for the area is $1.15 million, but residents are hoping to get approximately $2.3 million each if the new deal goes through.

Ms Papas, a long-term resident of Baulkham Hills, has witnessed first-hand the change that new development has caused.

A year ago, she decided to join forces with her daughter and son-in-law who lived next door and sell the properties together.

After thinking it was a good idea, they began to ask around to see if other neighbours were interested – and they were.

Ms Papas said that they got a consensus from the residents that they were interested, and the year-long negotiations kicked off from there.

Although there are only two homeowners who have declined to join the group, the remaining homeowners are planning on having the area zoned for apartments. 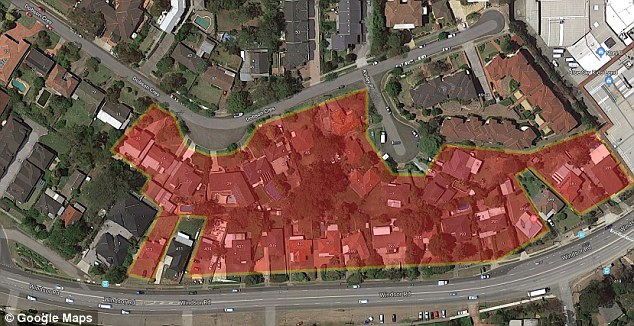 The ‘Amalgamated Super Site’ is the result of a year long deal among the neighbours, who are hoping to get more than $60million for the deal

Manager of investment services at Colliers International, Tom Appleby, said the residents were looking to make ‘at least double’ of what they’d make if the properties were sold individually.

Mr Appleby said the sales process was expected to take between 12 and 24 months, and that residents were aware they would likely have to wait longer than that to sell.

‘We’re expecting to field interest from developers seeking to build medium-density housing under the current R3 zoning, and also from oppotunistic developers who will look to attain uplift beyond the current planning controls.’

This isn’t the first project of its kind, with eight homeowners selling their homes for $40 million last year in Castle Hill.