A gigantic dust storm swirled over eastern Australia on Thursday, turning the sky pale red and prompting health warnings from the authorities.

The 310-mile wall of dust stretched almost the entire length of the state of New South Wales and closed in on its capital Sydney, causing poor visibility and travel disruptions.

It was driven towards the coast by strong winds barrelling across the drought-stricken interior and whipping up masses of dirt.

A road is shrouded in a cloud of dust as a gigantic 300-mile dust storm descends upon New South Wales, Australia 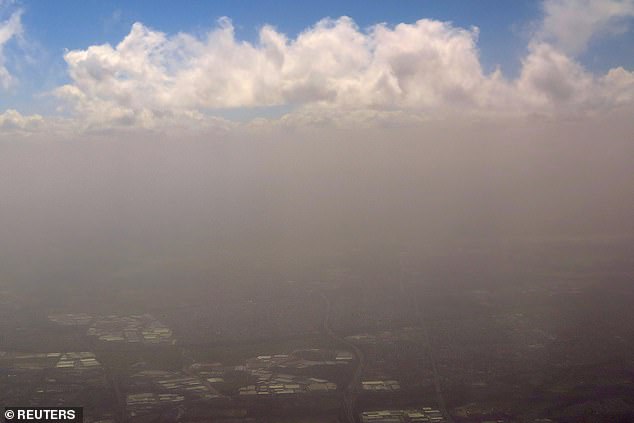 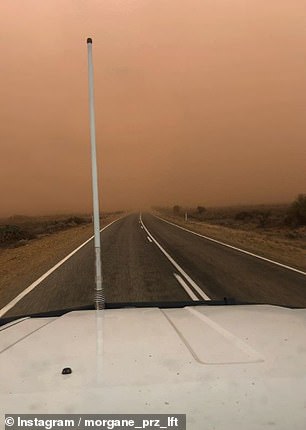 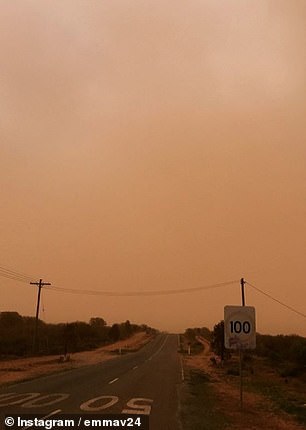 The skies over Sydney are expected to turn a deep red by late morning, as the dust storm moves east from western NSW 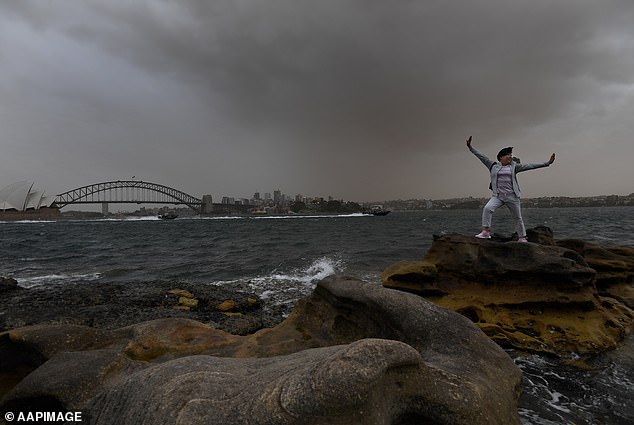 Authorities warned residents New South Wales who had respiratory or cardiovascular conditions to limit their time outdoors until the dust settled.

Adam Morgan of the Bureau of Meteorology said a low pressure system over South Australia and Victoria states had pushed powerful winds across areas of western New South Wales that have experienced one of the worst drought seasons in years.

‘This is the typical time of year for dust storms through inland Australia, but it is quite rare for dust to reach the east coast,’ he said.

Residents woke on Thursday to find a pale red haze in the skies over Sydney, with air quality readings in some suburbs described as ‘hazardous’.

However, the dust had mostly cleared by the afternoon. 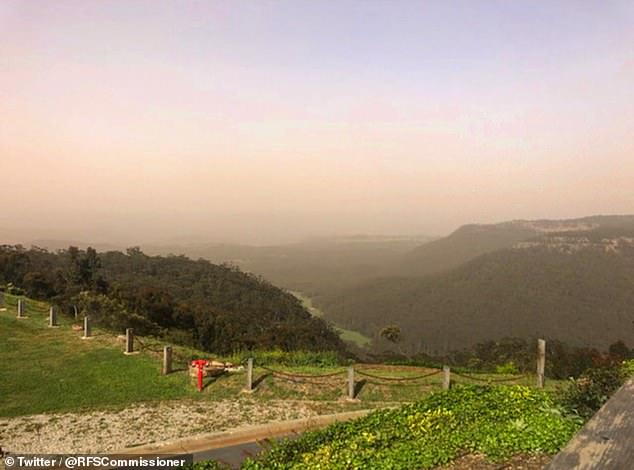 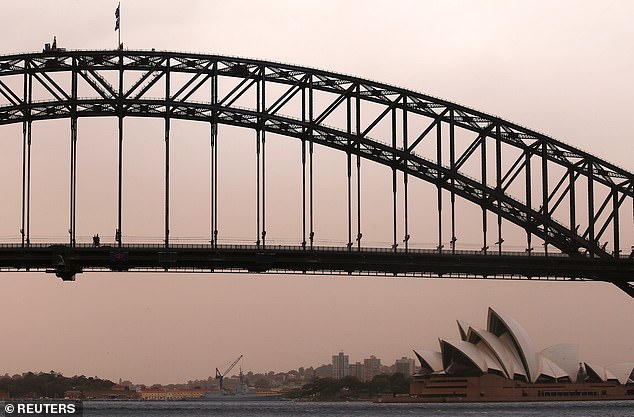 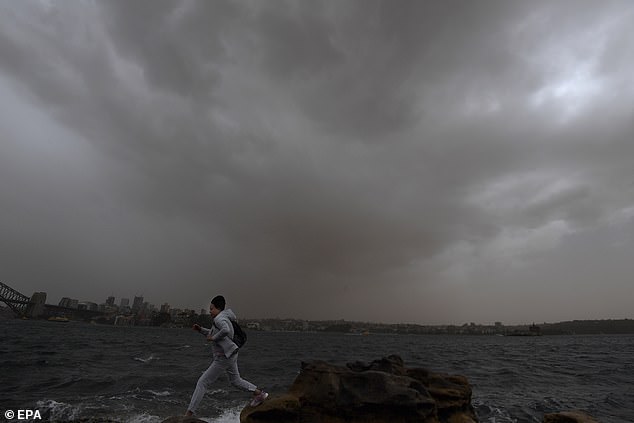 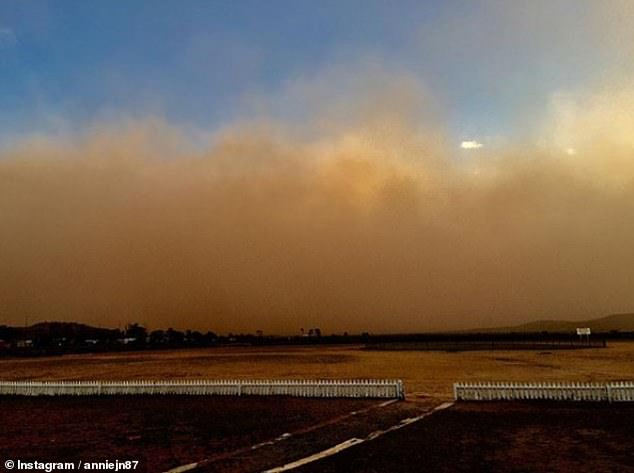 Strong winds from a low pressure system has whipped up masses of dirt across the drought-stricken state, which is steadily heading to the coast

‘If possible, stay in air-conditioned premises where filtration systems can help to reduce dust particles in the air,’ environmental health director Richard Broome said in a statement.

‘Dust may aggravate existing heart and lung conditions and cause symptoms like eye irritation and cough.’

The conditions bear a striking resemblance to 2009’s ‘red dawn’ – one of the worst dust storms in Australia’s history.

Though spectacular, Mr Narramore warned such events can be potentially deadly. 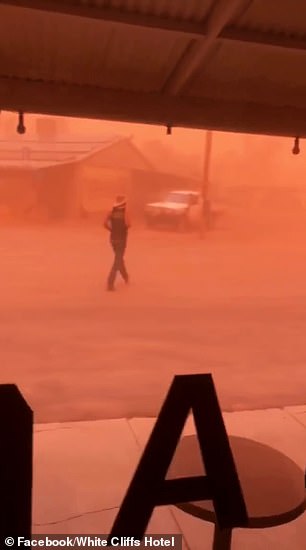 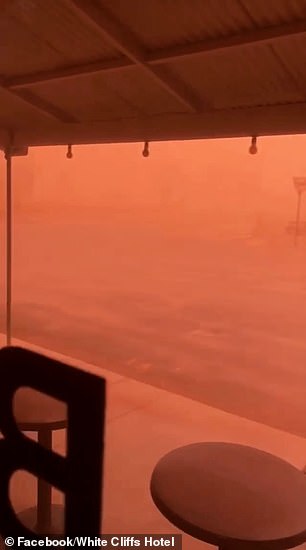 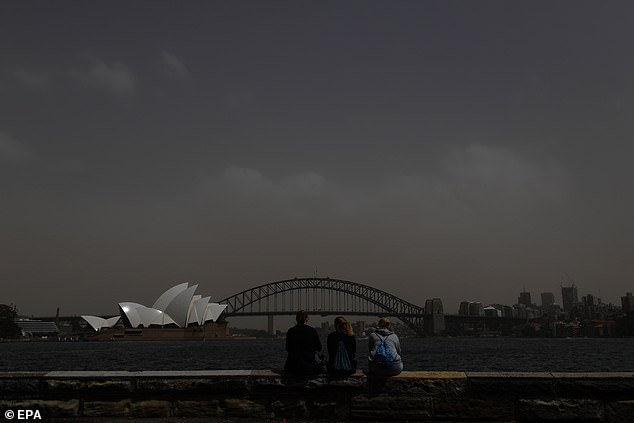 Tourists take photographs against the backdrop of the Sydney Harbour Bridge and the Sydney Opera House as a dust storm descends on the coastal capital of New South Wales, Australia, 22 November 2018 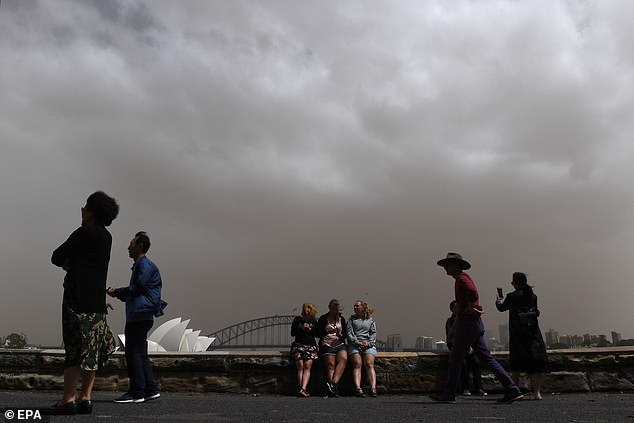 ‘The dust can get in [the lungs] and you start coughing and wheezing. Be careful about that out and about,’ he said.

‘Especially later today… There’ll be a fair bit of dust blowing around as we move into late morning hours.’

Footage of the storm, filmed from inside the White Cliffs Hotel in far west New South Wales on Wednesday, shows the swirling dust turn everything in sight a husky red colour.

‘Just blew the town red, bright red! And although it was bright it was that thick I couldn’t see across the road to the general store!’ she said. 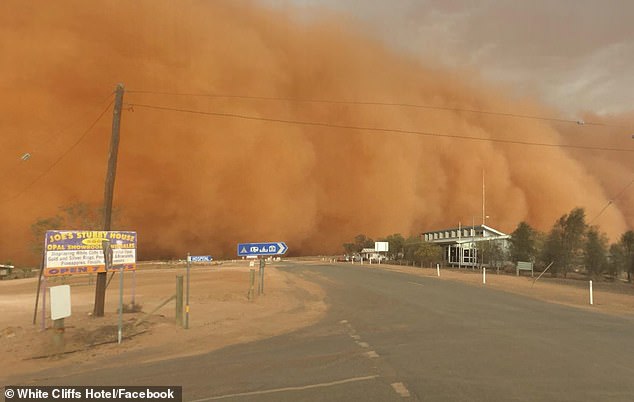 The storm left dust piles everywhere and the clean up was quite the task, she added.

‘[It’s] still gritty but what can you do, we love [it] out in the bush… That was today…next couple of days will be interesting!’ she said.

In 2009, the Sydney Opera House and the Harbour Bridge were barely visible and flights in and out of the city were cancelled as the dust storm swept across the city. 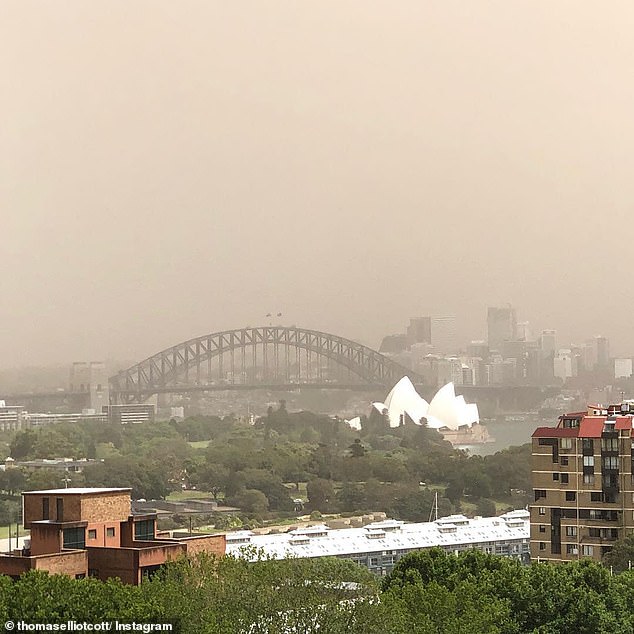 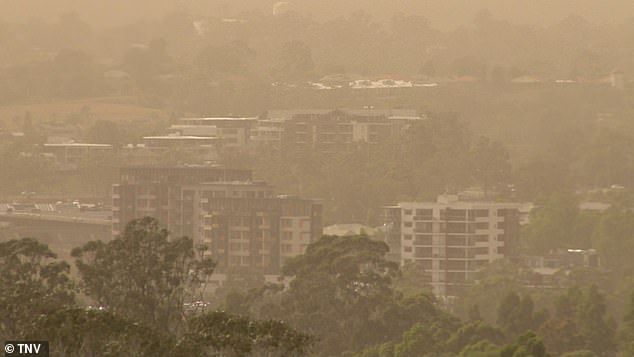 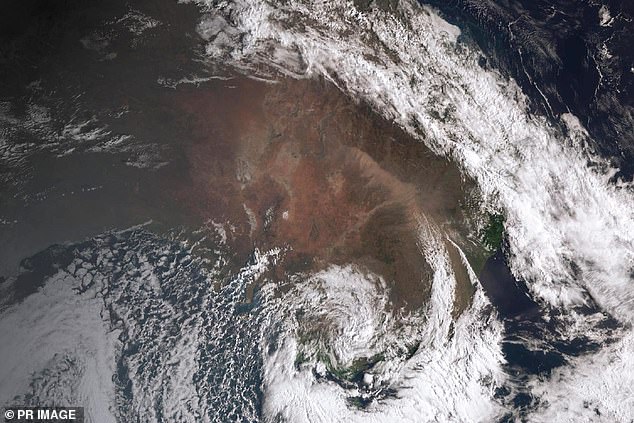 Bureau of Meteorology weather services manager Jane Golding said its computer model had suggested Thursday’s event could be comparable to 2009.

‘A frontal system generates some really strong westerly winds, and that frontal system ends up producing a low pressure system to the south of the country which picks up even more vigorous winds,’ Ms Golding told the ABC.

She said however that the dust storm’s reach would depend on the strength of the winds.

An Airservices Australia spokesperson said Sydney Airport has advanced procedures to allow for landing and taking off in low visibility conditions. However, there were delays to some flights from the airport. 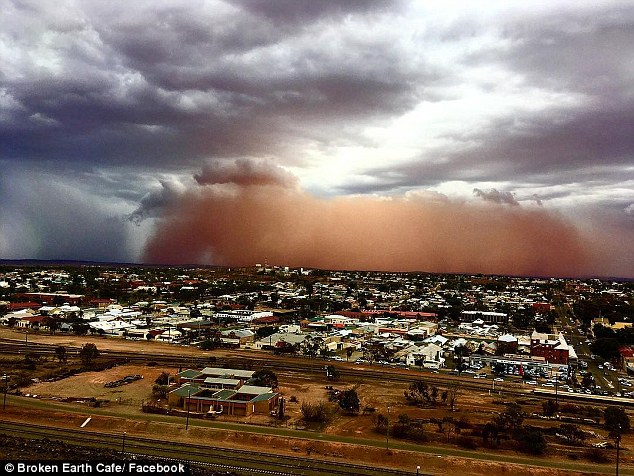 Dust storms are natural events, and are common in parts of the world with dryland areas.

Much of Australia’s land surface is made up of deserts and semi-arid rangelands.

Periods of severe and widespread drought can dramatically increase the likelihood of major dust storms, particularly during the summer months.

Dust storms reduce air quality and visibility, and may have adverse effects on health, particularly for people who already have breathing-related problems. 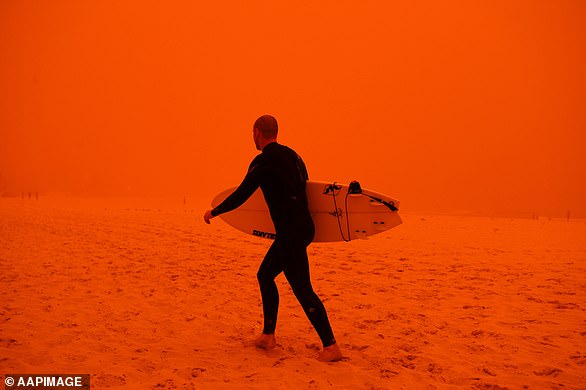 Coarse dust particles generally only reach as far as the inside of the nose, mouth or throat.

Smaller or fine particles, however, can get much deeper into the sensitive regions of the respiratory tract and lungs.

These smaller dust particles have a greater potential to cause serious harm to your health.

The following precautions can help you protect yourself and minimise the adverse effects of a dust storm: