3,000 patients exposed to HIV and hepatitis at New Jersey surgery with ‘unacceptable’ safety

Two fired at surgery where almost 4,000 patients were exposed to HIV after inspection found bloody sheets and dirty operating rooms that weren’t disinfected between procedures

A New Jersey surgery center that may have exposed more than 3,000 patients to HIV, hepatitis B and hepatitis C used poor drug storage methods, an outdated infection control plan and unacceptable sterilization practices, according to a new state report.

Operating rooms at the HealthPlus Surgery Center in Saddle Brook were not properly cleaned and disinfected between procedures, according to the report from the state Department of Health that was made public Friday.

In one instance, an inspector saw a stretcher in a hallway with a blood-stained sheet that wasn’t properly disinfected even after the inspector pointed it out to staffers.

Kristin Debenedictis, who’s one of the the 3,778 patients affected, said she was distraught after receiving the letter

‘I was just so upset,’ said Kristin Debenedictis, who’s one of the the 3,778 patients affected, told Pix 11. ‘Nobody wants to get news like that. HIV is, like, extremely scary. My friend, you know, he died of AIDS. It’s horrible.’

‘I needed to be checked for HIV and hepatitis,’ the letter said. The letterhead showed that it was from HealthPlus Surgery.

‘I started crying. I was just so upset. Nobody wants to get news like that.’

During a news conference Saturday, facility representatives said an investigation determined that ‘a handful of people who have been removed’ were mostly responsible for the lapses that occurred. Two employees were fired after revelations that thousands may have been exposed to the diseases.

Nearly 3,800 former patients have been urged to get tested, but authorities say no illnesses have been reported. The health department says the risk of infection is low, noting the recommendation for testing was made out of ‘an abundance of caution.’ 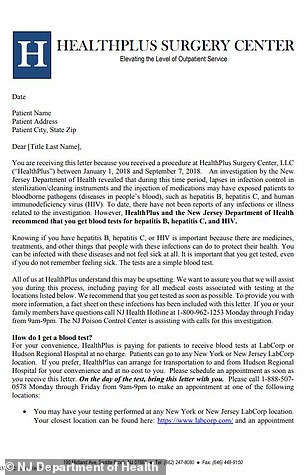 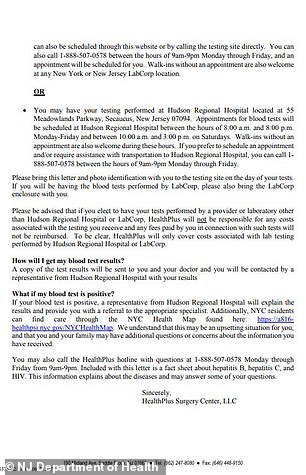 Patients who underwent procedures at HealthPlus Surgery Center in Saddle Brook, NJ, were  sent letters urging them to be checked 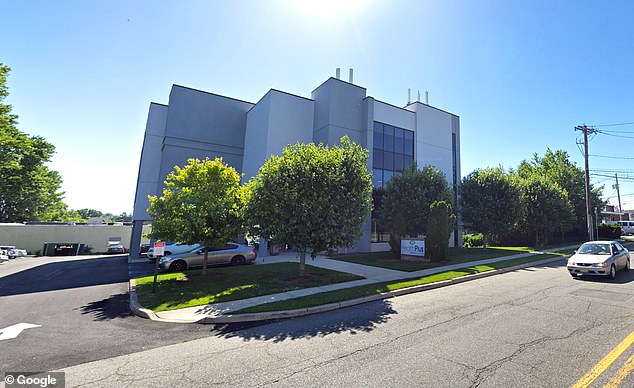 Patients at a surgical center in Saddle Brook, New Jersey, may have been exposed to hepatitis B, hepatitis C and HIV

State health officials have said anyone who had a procedure performed at the center from January to Sept. 7 this year may have been exposed.

The facility was shuttered for three weeks in September after the state Department of Health received a complaint.

The center’s nursing director resigned a day before the facility was shuttered. Mark Manigan, a Roseland attorney representing the center, declined to say if that was related to the complaint and closure. He said the center’s administrator is not expected to resign.

As part of a corrective plan implemented with the center’s reopening, HealthPlus must conduct quarterly infection control audits and sterilization audits every six months.