The concept of a flying car is not new, but an ambitious US company is resolving to be the first to bring it to the market – in just three years.

The Alef Model A, created by Alef Aeronautics in San Mateo, California, is a fully electric vehicle with a mesh-covered body that conceals eight propellers.

These propellers, which replace the traditional car motors, allow it to take off straight up into the air from a conventional road, without the need for any runway space.

Once airborne, it tilts 90 degrees so that the top of the car is facing forward – and then proceeds to fly through the air at top speeds.

Meanwhile, a passenger ‘bubble’ in the centre of the car, which holds up to two people, pivots on an axis so the passengers can face forward for the flight.

The Alef Model A, created by a startup based in California, has a mesh-covered body that conceals eight propellers that allow it to become airborne 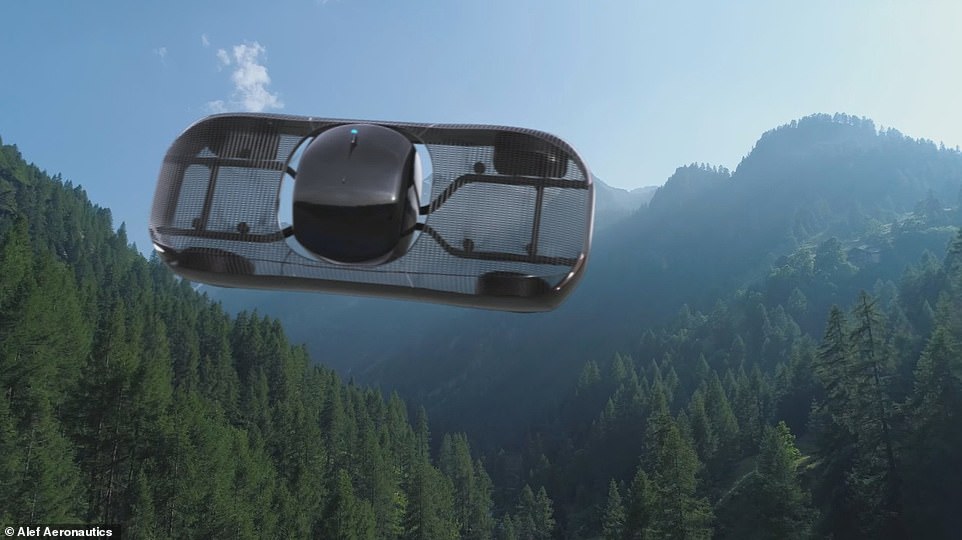 Once airborne, the car tilts 90 degrees so that the top of the vehicle is facing forward – and then proceeds to fly through the air

The car, which was recently unveiled at a press event in San Mateo, California, has a driving range of 200 miles (322 km) and a flight range of 100 miles (160km). The firm is yet to reveal any footage of a test flight, however.

Dukhovny described Alef Model A as ‘the world’s first real flying car’, because it can drive on a regular street and it doesn’t need to take off from a special designated area, such as an airport.

‘A flying car has to be a car, which means it can drive on a regular street, park in a regular parking space. And it also should have vertical take-off,’ he told the BBC.

‘If you require an airport to take-off, what problem are you solving? And why is this a flying car?’

According to the firm, Alef Model A is designed to drive on the street, take off vertically when needed and fly overhead above traffic, as a solution to ‘the issues of modern congestion’.

If the car were to encounter an obstacle on the road, it could potentially fly over it and land, without having to tilt 90 degrees.

The firm admitted however that it could only take off in ‘whitelisted’ areas, suggesting it will have to work closely with traffic and air authorities to get permission to fly.

The car also has a fetching pair of butterfly doors, which move upward rather than outward to open, and a simple interior of racing car-style seats.

When flying sideways, the mesh-covered body allows the air to pass through, keeping it light and allowing it to stay airborne without any safety concerns, the firm claims. 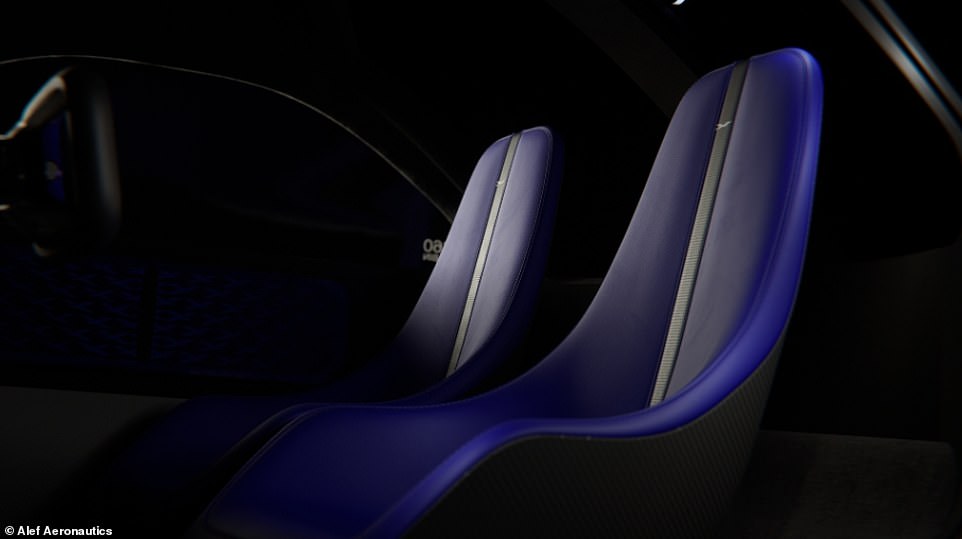 A passenger ‘bubble’ in the centre of the car, which holds up to two people, pivots on an axis so the passengers can face forward for the flight 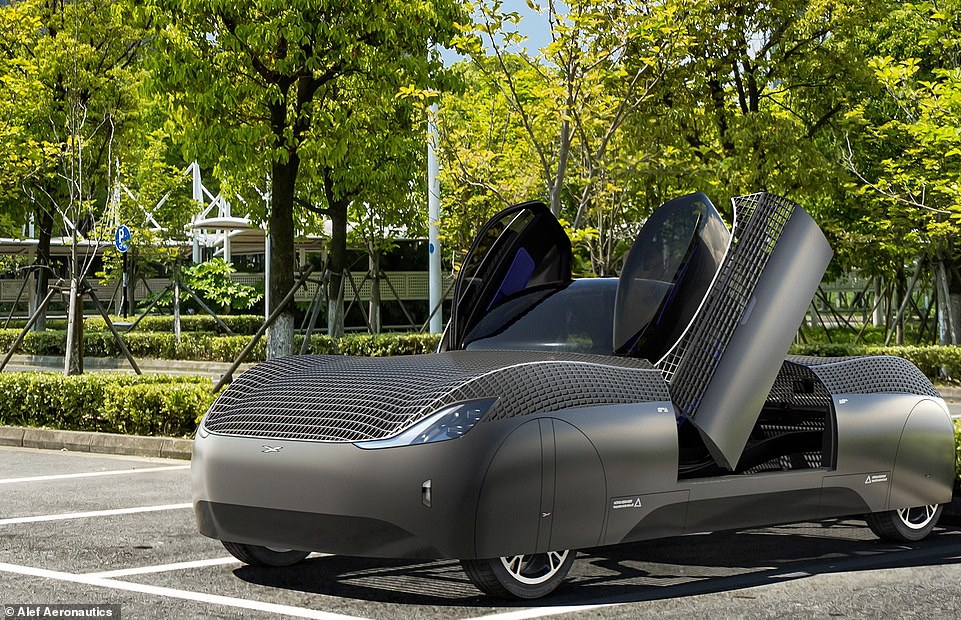 Alef Model A, which could get a release in 2025 has a pair of butterfly doors, which move upward rather than outward to open

As outlined at the unveiling event, his firm also has a second, cheaper vehicle planned for release in 2030.

‘This is not more complicated than a Toyota Corolla,’ Dukhovny said. ‘Our goal is to make sure it has the same price point.’

Numerous flying car designs and scaled-down prototypes have already been revealed, but the first flying car is yet to hit the market. 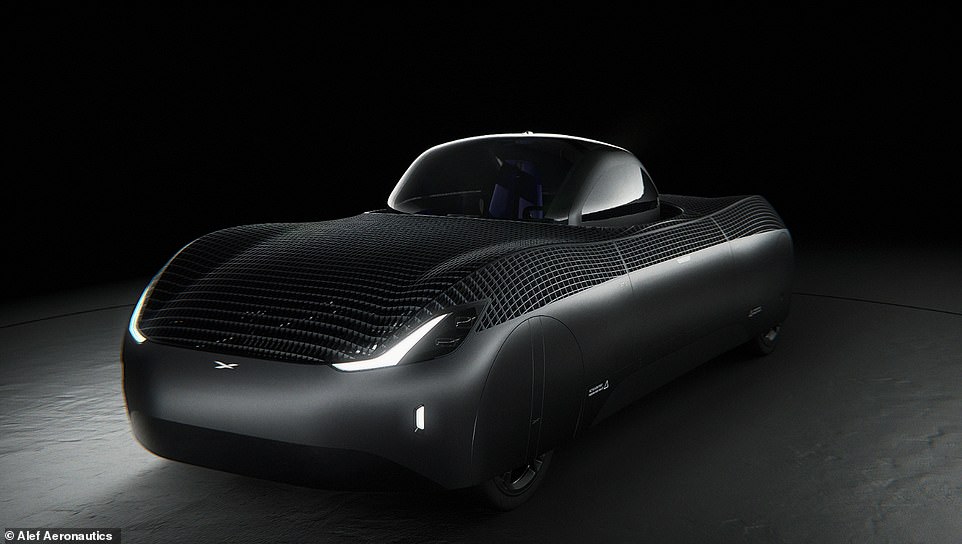 The Model A, described as a ‘solution to the issues of modern congestion’, has a driving range of 200 miles and a flight range of 110 miles

The South Korean carmaker, which created a new spin-off company called Supernal to design the craft, could make it available to the public as early as 2028.

Meanwhile, the AirCar Prototype 1, which has a 160 horsepower fixed-propeller engine, was developed by Slovakian firm KleinVision and tested last year.

A futuristic flying ‘hypercar’ designed for inner city travel that could reach speeds of 135 miles per hour at 3,000 feet has completed a successful test flight in Dubai.

London-based startup Bellwether Industries completed its test flight of the fully-electric Volar eVTOL prototype in November 2021, but has revealed footage of the test in January

The futuristic half-scale version flew at an altitude of 13 feet (4 metres) with a speed of 40 kilometres per hour (25 miles per hour), according to the firm.

The Bellwether Volar eVTOL prototype has been designed for private owners as a replacement for cars, freeing up space on the ground for cyclists and pedestrians and alleviating congestion, but it could also provide on-demand transport much like an Uber.

It plans to have a full-scale prototype to be ready and tested by 2023. Availability of the final model is expected in 2028 for on-demand transport and 2030 for private ownership, which would allow users to fly to work for a luxury commute.

The electric vehicle has a hidden propulsion system featuring ducted fans, avoiding any exposed spinning blades or a large wingspan.

It would charge just like an electric vehicle does on land – at dedicated charging points – although it will have to rely on a ‘comprehensive infrastructure and transport system’ to avoid falling out the sky when the charge is used up, the firm said.