Four in 10 Americans are unable to cover a $400 emergency expense and would have to resort to borrowing money or selling personal possessions if such a crisis occurred, according to a new study by the Federal Reserve Board.

The study, based on 2017 data, found that was an improvement compared to 2013, when half of adults would not be able to handle such an expense.

While fewer people reported such an expense to be insurmountable, those who couldn’t pull together $400 in a pinch were likely to carry a balance on their credit cards or borrow from friends or family – potentially worsening their financial standing.

The percentage of Americans who can cover a $400 expense has steadily increased since 2013, when only half of adults could handle the extra cost. By 2017 that number rose to nearly 60 percent

‘Nothing is more fundamental to achieving financial stability than having savings that can be drawn upon when the unexpected occurs,’ McBride said in a statement. ‘Regular direct deposits from the pay check to a savings account can build some much-needed financial cushion.’

However, the study found that 25 percent of Americans have no retirement savings at all. That may be attributed, in part, to employers who don’t offer retirement plans, as well as people who work several part-time jobs without receiving any benefits.

The report also found that 22 percent of Americans said they couldn’t pay all of their current month’s bills, and more than a quarter said they skipped necessary medical care in 2017 because they couldn’t afford it.

The report found that 74 percent of adults reported feeling ‘okay’ or better financially in 2017 – up 10 percentage points compared to 2013.

The study was based on the board’s fifth annual Survey of Household Economics and Decisionmaking, and surveyed 12,000 people on their income, employment, unexpected expenses, retirement planning and other factors. 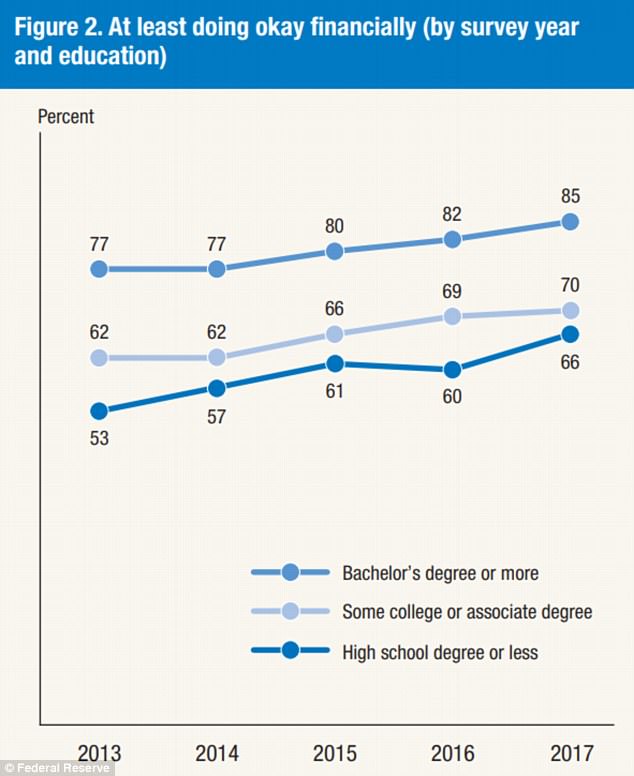 The percentage of people who report they are doing at least “okay” has been on the rise overall. This represents a breakdown based on education levels 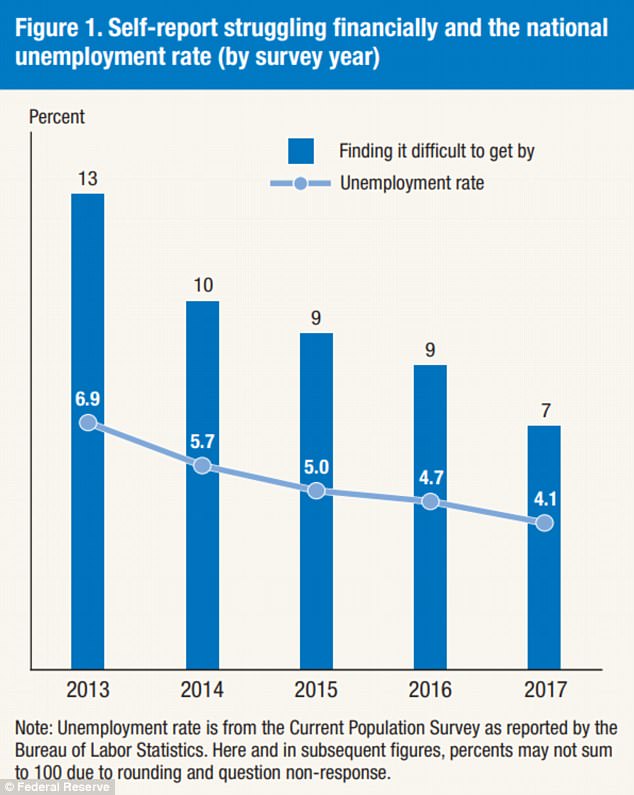 The percentage of people who report struggling financially has declined between 2013-2017, as has the overall unemployment rate. In 2017, 7 percent of Americans reported they were struggling