Nearly 40 percent of Americans are under the misconception that alternative therapies can cure cancer, despite a total lack of evidence that these treatments can, a new report reveals.

Some 14 million new cases of cancer are diagnosed every year worldwide, and more than eight million people die of the disease each year.

It’s still a staggering death toll, but medicine has come a long way in the treatment of cancer.

Since 1991, the cancer death rate has fallen 26 percent, thanks to lower rate of smoking, better, earlier screening and proven treatments like surgery and chemotherapy, and, more recently, immunotherapy.

But alternative therapies used as substitutes for – rather than in addition to – proven treatments  have made their way into the lime light and gained the misguided trust of Americans, a new American Society of Clinical Oncology (ASCO) study found.

Nearly 40 percent of Americans believe that alternative cancer treatments like specialized diets and supplements can cure cancer, without the use of proven therapies, new report finds

Cancer was once a death sentence, and treatment can still be grueling, but it is a far more curable disease than it was just a couple of decades ago.

For example, in 1975, a quarter of all people diagnosed with breast cancer succumbed to the disease within five years.

Still, in parallel with the general shift of public opinion toward natural foods, products and medicines, more Americans are finding alternative treatments that they see as more natural more appealing.

According to the latest survey, 38 percent of Americans think that an alternative cancer treatment alone can cure the disease. 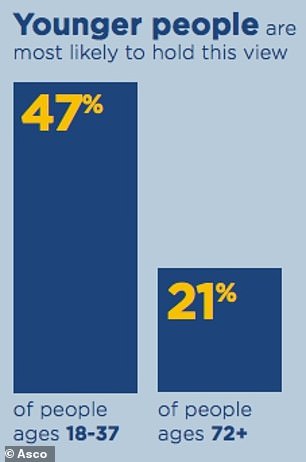 And almost half (47 percent) of the youngest group of Americans surveyed, those between 18 and 37, held this belief.

Their confidence in these treatments stands in direct opposition to much higher, documented death rates among those who choose alternative therapies.

A study published last year in the Journal of the National Cancer Institute found that those who used alternative treatments were 2.5-times more likely to die of cancer than those  who underwent traditional treatments.

In part, patients may be putting their trust in celebrities who choose alternative treatments as much as they put their trust in the treatments themselves – despite dire consequences for even wealthy and powerful cancer sufferers.

Steve Jobs knew he had pancreatic cancer – one of the deadliest kinds of the disease – in 2003, yet he waited to start treatment.

Despite his position as the CEO of and driving force behind technology giant, Apple, Jobs had long been inspired by Eastern religions and meditation (though he himself was not religious).

This may have inspired his nine-month course of alternative treatment for cancer, which reportedly incorporated a tailored diet.

His weight plummeted, his pallor changed and after nine months he underwent surgery to remove as much of the tumor as possible.  He had an experimental treatment in 2009, too, but in 2011, Jobs passed away.

The news of Jobs’s death made international headlines – as did the apparent failure of alternative treatments.

But that hasn’t slowed Americans interests in them, despite lacking scientific evidence and some very public failures, like Jobs’s treatments.

Many cancer patients struggled to get access to opioid pain medications to treat their cancer symptoms, but three quarters of Americans favor restricted access to the addictive drugs

The vast majority of Americans support medical marijuana for treating pain and nausea from cancer and its treatments, but about half of patients say the struggle to get access to the drug

On the other hand, ‘there’s no question that evidence-based cancer therapy is necessary to effectively treat the disease,’ he said.

‘When patients are making critical decisions about which cancer treatments to undergo, it is always best to follow the evidence from well-designed research studies.’

Many doctors and oncologists are now more than willing to embrace alternative therapies as complementary to traditional ones, however.

These include everything from botanicals and nutrition plans to spiritual healing and meditation. Some research indicates these may even be helpful to cancer patients when used in tandem with – but never in the place of – standard practices

Marijuana falls awkwardly on both sides of this line.

The drug and its derivatives have been clinically shown to alleviate symptoms of cancer treatment (and of some cancers themselves) like pain, loss of appetite and nausea. 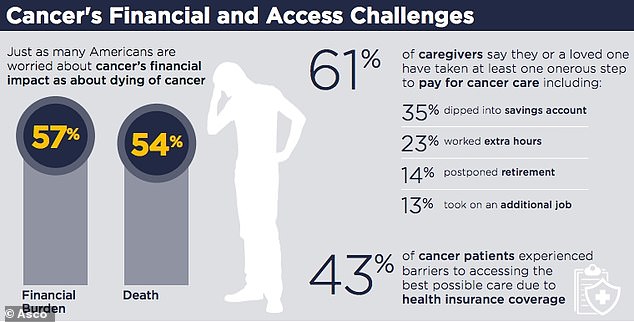 Yet cannabis has erroneously been called a ‘cure’ for cancer, a claim that’s misled too many people.

It and other alternative treatments also have financial appeal to the 57 percent of Americans who are concerned they won’t be able to afford the cost of treating cancer.

‘If a family member has been diagnosed with cancer, the sole focus should be helping them get well. Instead, Americans are worrying about affording treatment, and in many cases, they’re making serious personal sacrifices to help pay for their loved ones’ care,’ said Dr Schilsky.

And the focus, too, needs to be on getting treatment that works, not on treatments that carry unsubstantiated promises.