40 people linked to Drogheda drug feud, including women and children, have ‘gone to ground’

An Irish mob boss who was linked to the brutal murder and dismembering of a teenage boy has fled to Britain.

The unnamed gang boss was reportedly due to be delivered the severed head of victim Keane Mulready-Woods, 17, who was killed earlier this month.

He has since escaped to Rochdale in Greater Manchester amid an escalating gang feud.

Up to 40 people linked to the Drogheda drug feud, including women and children, have reportedly ‘gone to ground’, fearing repercussions from authorities.

They reportedly fear being shot or arrested, after it emerged the Garda held high-level meetings with specialist units to discuss how to tackle to crime.

Specialist officers from the Criminal Assets Bureau (CAB), National Bureau of Criminal Investigation (NBCI) and the Drugs and Organised Crime Bureau (DOCB) were in attendance at the meeting on Monday.

Keane Mulready-Woods, 17, (pictured) who was murdered and dismembered and his severed head left in the boot of a burning car in north Dublin in a suspected gangland execution

The officers gathered to discuss a ‘head-on’ strategy for tackling feuding gangs, the Irish Independent reported.

‘Virtually all of these criminals are now in hiding – they are terrified of being arrested and they are also very concerned that they will be shot,’ a source told the paper.

‘At times this week, some of the housing estates that they have terrorised for over two years now are like ghost towns.

‘The atmosphere is very weird.’

One exception of the ‘self-imposed lock-down’ was a 35-year-old Dublin criminal, who has reportedly been seen walking the streets of Dublin ‘every third day’.

It comes after it emerged the chief suspect in the Irish gangland execution of a dismembered teenager is alleged to have previously desecrated the grave of a murdered rival’s brother.

Michael’s brother, Willie Maughan, 35, and his pregnant girlfriend Anna Varslavane, 21, are believed to have been murdered in 2015.

Willie was never found but a year later Michael’s grave was dug up, the family believe, to intimidate them after they appealed for Willie’s remains. Michael had died from meningitis in 2008. 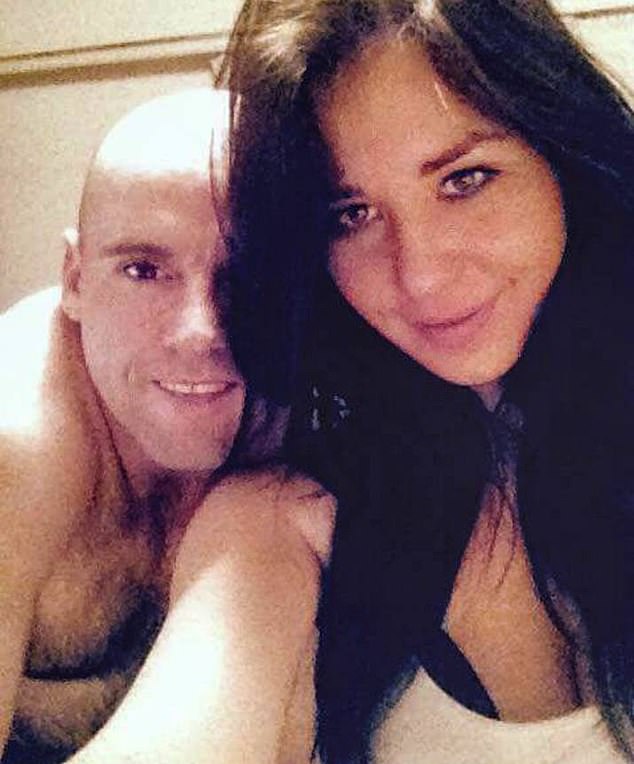 Willie Maughan, 35, (left) and his pregnant Latvian girlfriend Anna Varslavane, 21, (right) are believed to have been murdered in 2015. Maughan’s family said he ‘knew so much’ about the gang’s activities that he was ‘taken out’ 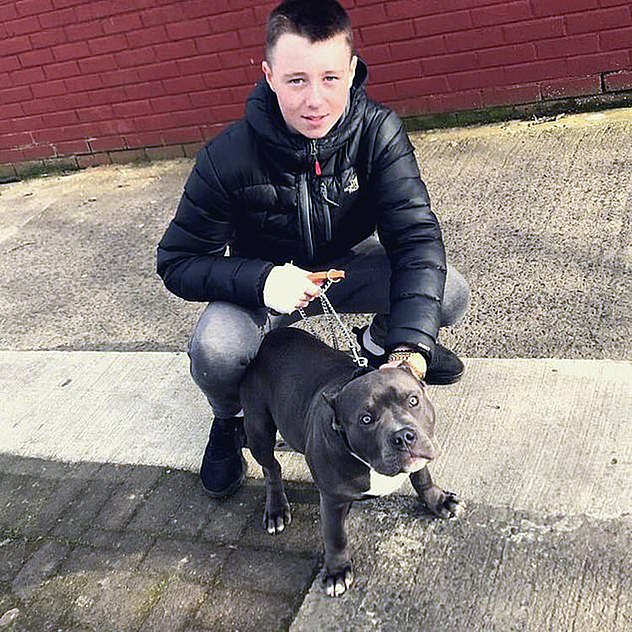 Maughan’s parents said at the time their son was killed because he ‘knew so much’ about the gang’s activities – a gang which he was previously associated with before changing his ways.

The chief suspect in Mulready-Woods’ death, a north Dubliner, is believed to be a notorious enforcer and was formerly associated with mobster Owen Maguire – whose gang are suspected of participating in the grave-digging. 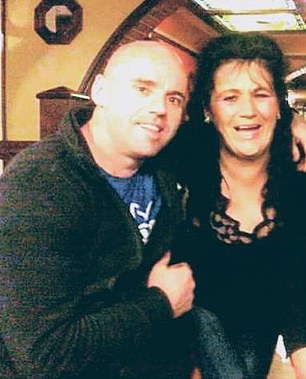 Police sources told The Irish Sun that the Mulready-Woods murder suspect had been named as one of those involved in the horrific grave-digging incident.

The source said: ‘This young man has been involved in many violent incidents and he was identified as one of the people involved in digging up an innocent man’s grave.

‘He was part of a gang who were behind a campaign of intimidation against the Maughan family who were just speaking up for their son.

‘He was one of the Maguire gang’s main enforcers before deciding to go out on his own and quickly turning against his former associates.’

Indeed, in July 2018 the man is alleged to have left Maguire paralysed after an attempted drive-by shooting went awry.

Nell Maughan, Willie’s mother, told the newspaper that the men now expressing their outrage at Mulready-Woods’ killing on social media were hypocrites.

She told The Sun: ‘I don’t understand how they can call on people with information to come forward on one awful murder and yet remain silent over my son and his girlfriend’s killing.’

It comes as Cornelius Price, a prominent figure in the feud and a known associate of Maguire, called for reinforcements from the UK after learning that a £100,000 bounty had been put on his head.

Mulready-Woods is believed to have been involved in collecting debts for Price and Maguire before he was found hacked up in Drogheda. 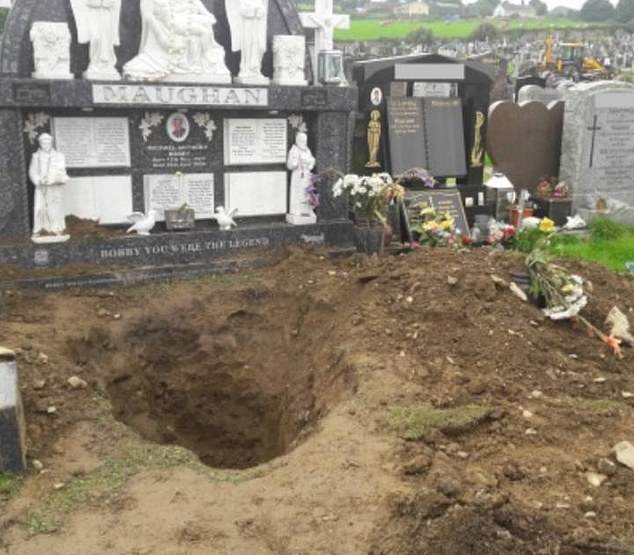 Maughan’s remains were never found but a year later his brother Michael’s grave was dug up – the family believe to intimidate them after they appealed for Willie’s remains. Michael had died from meningitis in 2008 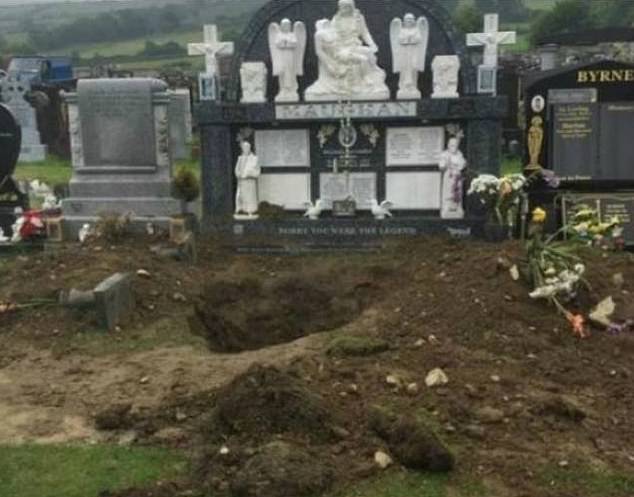 Police sources said the Mulready-Woods murder suspect had been named as one of those involved in the horrific grave-digging incident. 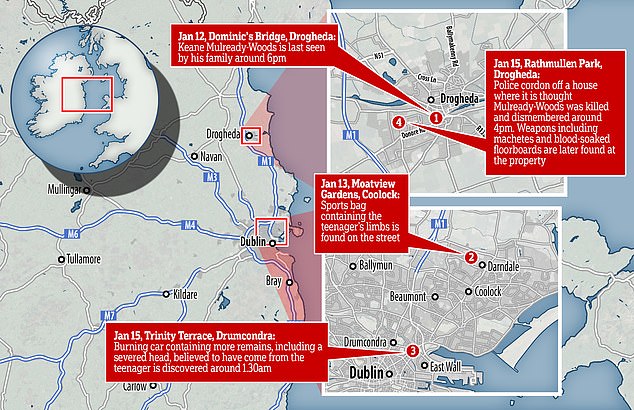 Price is thought to have a £100,000 bounty placed on his head by the same hitmen suspected of abducting Mulready-Woods in Drogheda, dismembering him and then dumping his bodyparts around Dublin

Officers have still not found Mulready-Woods’ torso, where they believe the fatal wounds were delivered, and so have been unable to say exactly how he died.

‘Obviously they are endeavouring to plan for a funeral, that’s not easy when all of the remains of Keane are not there. This is obviously a horrific murder.’

Associates of Price, who have provided him with protection in the past, arrived in Ireland at the weekend as tensions around Drogheda soared, The Irish Sun reports.

The same allies have also provided protection for Maguire, who was left wheelchair-bound after an attempted hit three years ago, in the past.

Price and Maguire are both top targets for the gang members who are thought to have murdered Mulready-Woods as part of an ongoing turf war.

It is thought that the chief suspect had been intending to dump the teenager’s severed limbs on Magurie’s doorstep and deliver his head to Price as a warning.

But he and another 24-year-old man who is also though to have been involved were spooked on their way to deliver the remains after spotting Garda officers investigating a separate crime nearby.

The pair dumped the bag containing the boy’s limbs on a housing estate in Coolock, Dublin, where they were found by children.

As police descended on the area the men attempted to dispose of the rest of the remains – including the severed head – by burning them in a car.

The fire was extinguished before the remains were destroyed.

The 24-year-old suspect has subsequently been arrested for parole violations relating to a separate case, and is being held in custody.

Investigators believe Mulready-Woods was kidnapped off the streets of Drogheda overnight on January 12 before being taken to a nearby house where he was murdered and dismembered.

Forensic investigators have been at the house and are said to have found blood soaked floorboards and a stash of machetes at the property.

Officers have still not found the teenager’s torso, where they believe the fatal wounds were delivered, and so have been unable to say exactly how he died.

Just hours after Keane vanished, and hours before his remains were discovered, a shooting took place in Drogheda which officers believe was related to the feud.

An innocent taxi driver was shot in what is believed to be an attempted hit on a known gang member on the Bridge of Peace on Monday night.

That was followed by a double shooting on an industrial estate in north Dublin on Friday afternoon that left two men in critical condition. 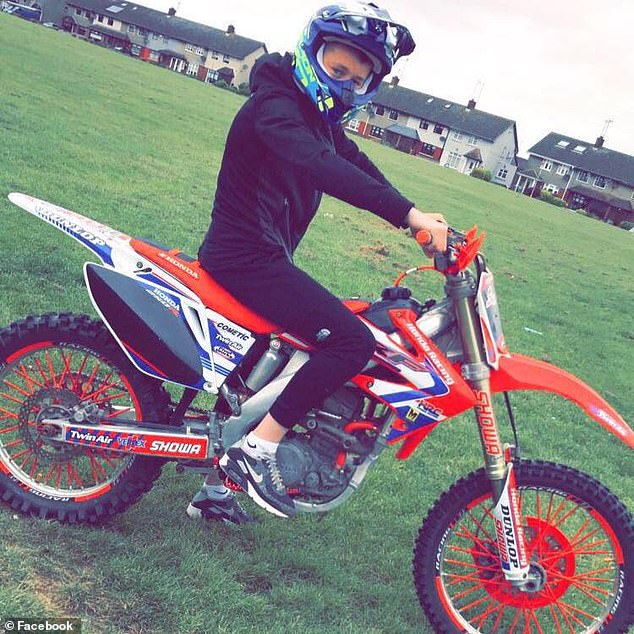 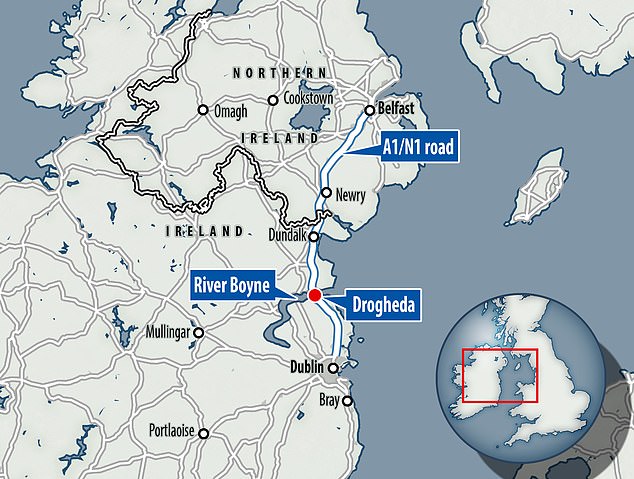 Three people, including Mulready-Woods, have been killed as part of a feud between rival gangs in Drogheda, which is located between Dublin and Belfast

While that shooting is not thought to have been directly related to the Drogheda feud, it is possible that the suspects used it as a distraction to carry out their hit.

Two men in their 20s who are known to police have been arrested after they were found close to a burning car in Dublin after the shooting took place.

The Drogheda gang feud has been ongoing since 2018 when gunmen opened fire on Owen Maguire near his home in the town, leaving him paralysed.

That shooting sparked a series of tit-for-tat attacks that resulted in the fatal shooting of reputed gang driver Keith Branigan in August last year on a caravan site.

Richie Carberry, a close associate of one of the men suspected of Mulready-Woods’ murder, was then shot dead outside his home a few months later.