Around two in five children in England have not visited their dentist in the past year, shocking NHS figures revealed today.

Under 18s are urged to have a check-up at least once a year, to prevent tooth decay by picking it up before they rot away.

But NHS Digital figures released today and branded ‘unacceptable’ show that just 41.4 per cent made the trip last year.

NHS Digital data also showed only half of adults saw a dentist in the past two years, which is how often they should be checked-up.

He said: ‘Frankly, it is unacceptable that more than two in five children did not see an NHS dentist in the last year.

‘Today’s figures serve as a reminder that there is still a long way to go in improving children’s oral health in the England.’

The data also delved into the rates of adults and children visiting their dentist across England. 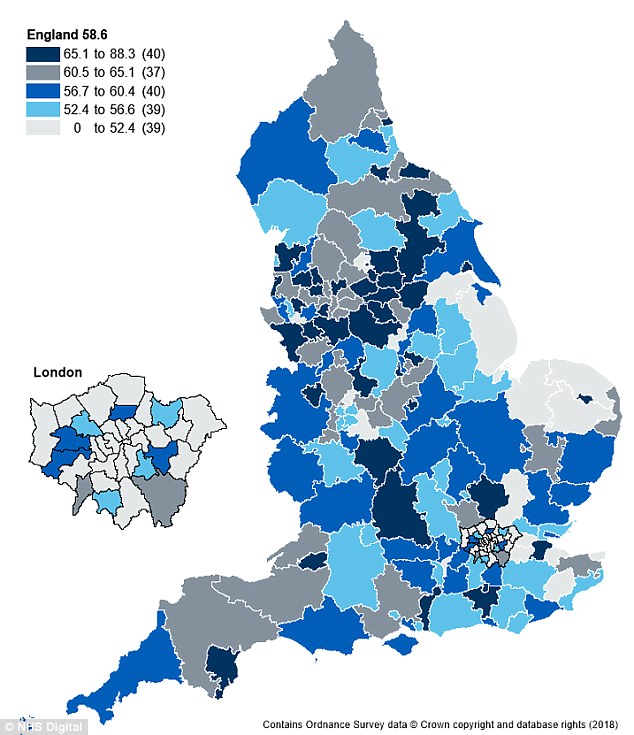 The North topped the charts for the highest attendance rates for both age groups, according to NHS Digital figures.

Some 56.1 per cent of adults in the region visited their dentist over the past two years, and 63.4 per cent of children in the past 12 months.

In comparison, London finished bottom of the pile for both age groups.

Just 44.3 per cent of adults in the capital saw their dentist over the past two years, and 49.8 per cent of children in the past 12 months.

FOR ADULTS (in the past 2 years)

FOR CHILDREN (in the past 12 months)

The figures also revealed a stark divide between the ages of children and how often they visit the dentist.

Only a third (34.1 per cent) of toddlers up to the age of four across England saw their dentist in the past year.

Parents are urged to take their children to see the dentist as soon as their first teeth appear.

Children should then see a dentist at least once every year so that preventable problems like tooth decay can be spotted early.

Check-ups are free on the NHS for under 18s. But privately, the 10-minute appointments can cost in the region of £30.

Professor Escudier added: ‘It’s so important that we get children along to the dentist from a young age.

‘Dental check-ups in early years are as much about getting children comfortable in a dental environment as they are about checking teeth.’

‘Many adults are reluctant to visit the dentist because as children they first visited the dentist after, rather than before, problems emerged.’

More than 60,000 children in England had teeth extracted in hospital last year because of tooth decay, figures revealed in April.

Dentists at the time called for kids to be given lessons in how to brush their teeth, which can stop teeth from rotting away.

Nearly two thirds of NHS dentists are thinking about quitting amid an ongoing crisis that has drained morale.

NHS Digital data shows up to 69 per cent of dentists in the UK have admitted to having ‘often thought about leaving’ in 2017/18.

This is about 10 per cent higher in all four of the home nations than it was two years prior, in 2015/16, the figures released today show.

Angry dentists say they are being swamped by red tape and are unhappy about the target-driven culture placed on them in the health service.

They also claim their income has fallen by up to 35 per cent since a new contract was introduced in 2006.

He said: ‘Austerity is meant to be over, but across the UK NHS dentistry is running on fumes. We’ve seen a drop in real incomes without precedent in the public sector.

‘The results are predictable, morale at an all-time low, recruitment and retention problems mounting, as patients wait longer or travel further for care.

‘Underfunding and failure to deliver meaningful reform has left the sustainability of this service in doubt.’

There are around 24,000 dentists in England. On average, for doing mainly NHS work, they earn about £100,000 – more than a government minister.