Forty-two inmates were found hanged inside their cells at three different prisons in Brazil’s Amazonas state on Monday.

All 42 prisoners were found dead in the city of Manaus and showed signs of asphyxia, according to the Amazonas state prison agency.

According to Brazilian outlet Exame, the deaths occurred by hanging and were reported at Antônio Trindade Criminal Institute (Ipat), the Puraquequara Prison Unit (UPP) and the Provisional Detention Center (CDPM I), all located in Manaus.

The stunning death toll follows just one day after 15 other others died during fighting among prisoners at a fourth prison in the same city.

The deaths echo a similar rampage in 2017 when more than 120 inmates died at the hands of other prisoners during fighting among rival gangs at prisons in northern states. In those brutal murders, many of those victims had their heads cut off or their hearts and intestines ripped out.

Relatives of inmates react in front of a prison complex in the Brazilian state of Amazonas after prisoners were found strangled to death in four separate jails, according to the penitentiary department in Manaus, Brazil on Monday 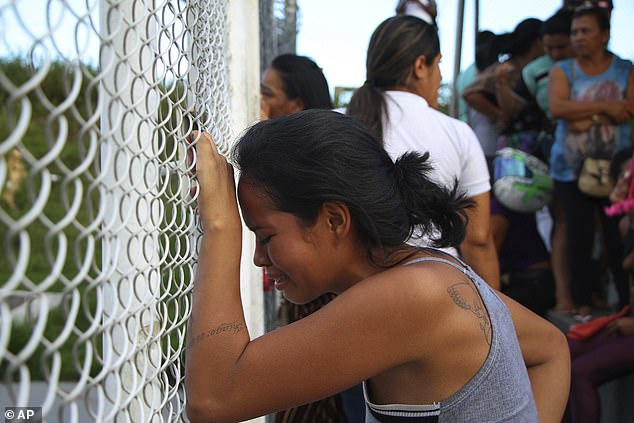 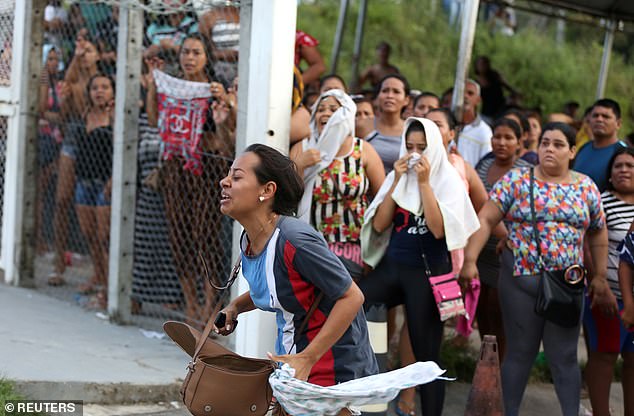 Heartbroken and crushed relatives demanded answers outside of the three prisons 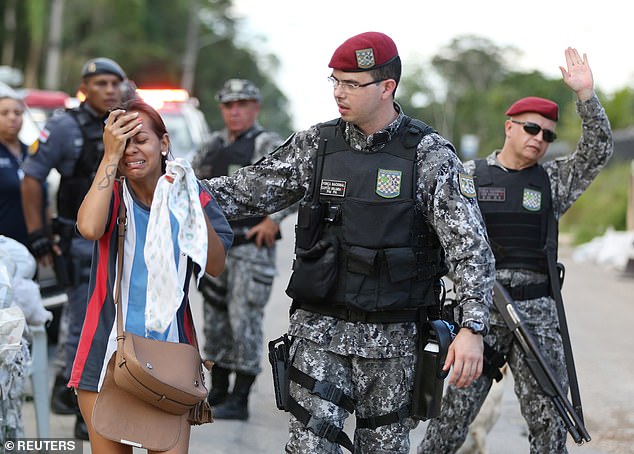 The kilings have led heartbroken families to swarm the jails, wailing and pleading for answers on the cause of the death of their loved ones.

According to the State Department of Penitentiary Administration (Seap), the main lead in the investigation is factional disputes in the states, according to Exame.

The Amazonas state prison agency said early Monday that several prisoners were ‘found dead by hanging inside their cells’.

‘I just spoke with (Justice) Minister Sergio Moro, who is already sending a prison intervention team to the State of Amazonas, so that he can help us in this moment of crisis and a problem that is national: the problem of prisons,’ Amazonas state Gov. Wilson Lima said.

The prison agency said that the situation was ‘under control’ and that prisoners were under lockdowns.

On Sunday, 15 inmates were killed during a riot at Manaus’ Anisio Jobim Prison Complex, where 56 prisoners died in the violence two years earlier. 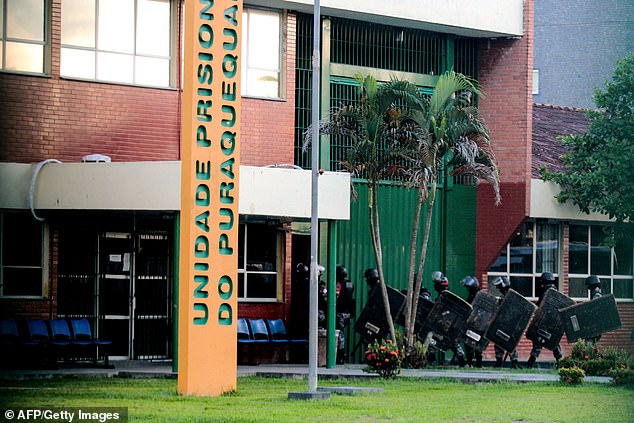 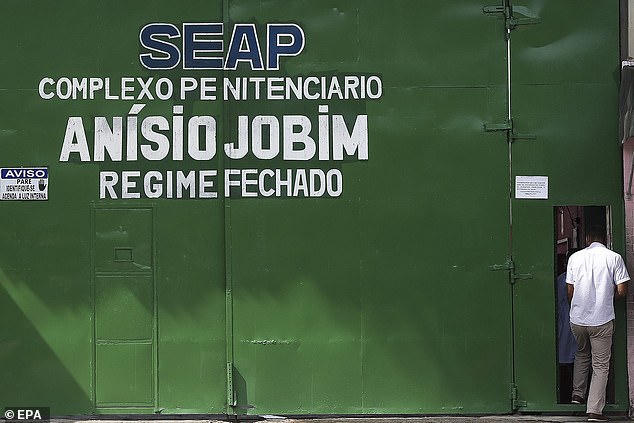 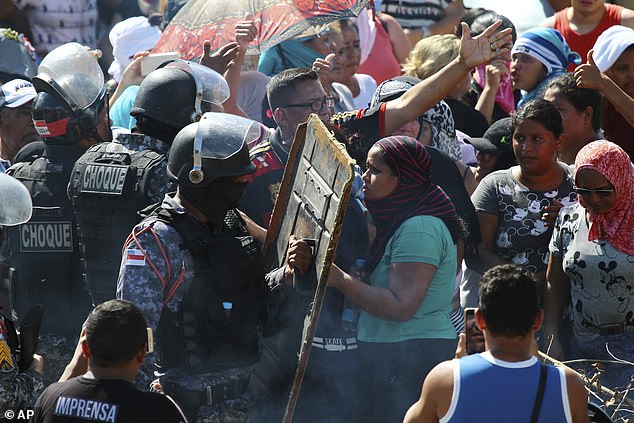 The news of the 15 inmate deaths led to protests outside the jail, with concerned family members asking about their loved ones on Sunday 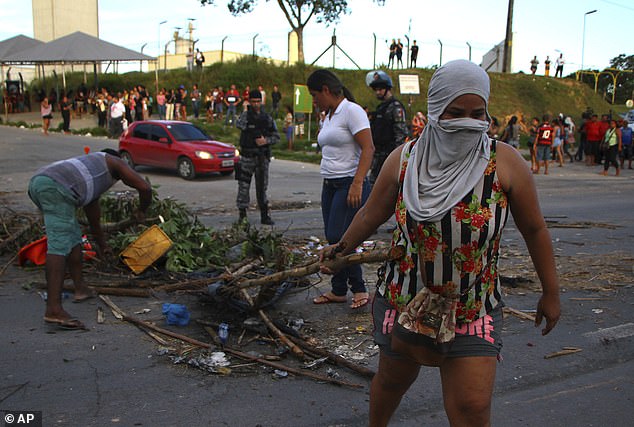 Relatives of inmates dismantle a barricade after a short protest to demand more information bout their loved ones, outside the Anisio Jobim Prison Complex in Manaus on Monday

Sunday’s clashes broke out during morning visiting hours where some of the inmates were stabbed with sharpened toothbrushes, while others had been strangled.

Secretary Col. Marcus Vinicius de Almeida said an investigation has been opened to determine the cause of the fight on Sunday.

‘Some died inside the cell with the bars closed,’ Almeida said.

‘Some deaths occurred by asphyxiation and others by perforations with the use of … [sharpened] toothbrush.’

Local authorities said prisoners began fighting among themselves before noon Sunday, and security reinforcements were rushed in and managed to regain control within 45 minutes. 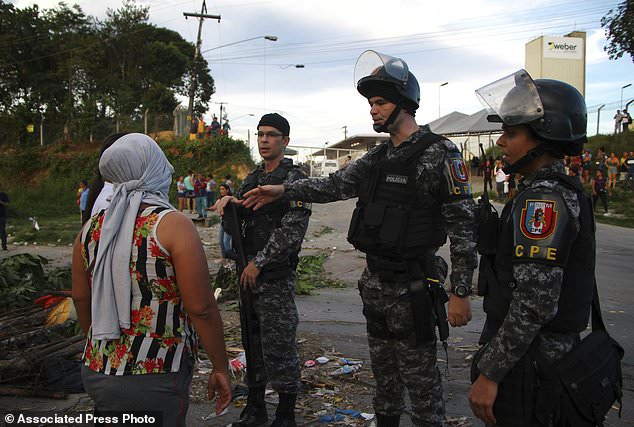 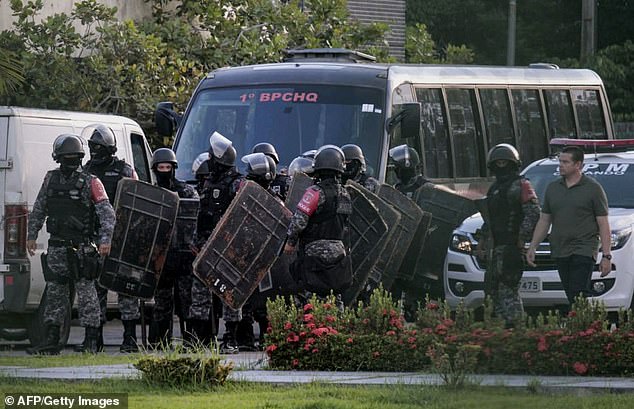 While authorities have not said whether gang wars were behind the latest blood-letting, several drug-trafficking and other criminal gangs in Brazil run much of their day-to-day business from prisons, where they often have wide sway.

Moro had to send a federal task force to help tame violence in Ceara state in January that local officials said was ordered by crime gang leaders angered by plans to impose tighter controls in the state’s prisons.

Prisons in Brazil are severely overpopulated and dangerous.