45,000-year-old skull from Czechia is oldest human genome EVER found

The oldest DNA ever found in human remains belongs to a woman who lived in Czechia more than 45,000 years ago, a study has found.

Analysis of her skull reveals she was among the first batch of Homo sapiens to live in Eurasia after our species migrated out of Africa.

It is believed the woman, dubbed Zlatý kůň, may have had Neanderthal ancestors as little as six or fewer generations in her past.

The finding reinforces that humans mated with Neanderthals shortly after we first reached Europe between 50,000 and 45,000 years ago.

This mating event saw humans absorb some Neanderthal genes which survive in all modern people except Africans.

Neanderthals would go extinct shortly afterwards, with some researchers saying competition with Homo sapiens and a changing climate was to blame.

Pictured, the skull of a modern human female individual dubbed Zlatý kůň. The genetic material obtained from this specimen is thought to be the oldest human DNA found in Europe and proves Homo sapiens mated with Neanderthals shortly after arriving in Europe 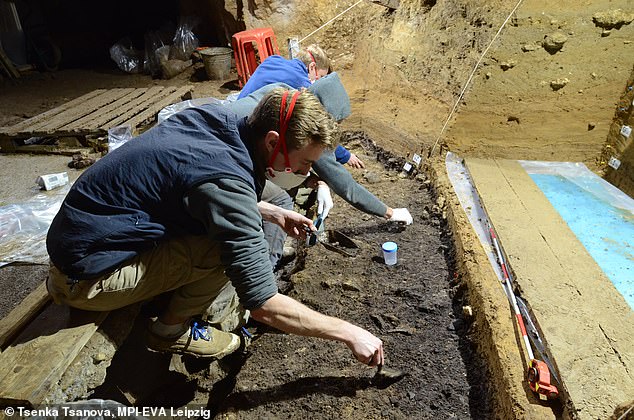 Pictured, excavations at Bacho Kiro Cave in Bulgaria. Several modern human bones were recovered from this layer along with a rich stone tool assemblage, animal bones, bone tools, and pendants

Timeline of human mating with Neanderthals

Around 48,000 years ago: Admixture event between Neanderthal and Homo sapiens. Humans mate with Neanderthals for the first time

Researchers from the Max Planck Institute for the Science of Human History in Germany tried to date the skeletal remains using radiocarbon isotopes, the traditional and widely-used method for figuring out when a fossil lived.

However, contamination of the remains made this impossible.

But Neanderthal DNA can be used as a proxy for dating because the length of its segments in the genetic code decreases steadily over generations.

The researchers found in their study, published in Nature Ecology and Evolution, that Zlatý kůň has long strips of uninterrupted Neanderthal DNA scattered throughout her genome, indicating she lived not long after humans mated with Neanderthals.

‘The results of our DNA analysis show that Zlatý kůň lived closer in time to the admixture event with Neanderthals,’ says Kay Prüfer, co-lead author of the study.

In fact, the team estimate that Zlatý kůň lived just 2,000 years after the first interspecies trysts between humans and Neanderthals.

The DNA from this person and their population is not seen in modern-day people in either Asia or Europe, where Homo sapiens later colonised, the researchers found.

‘It is quite intriguing that the earliest modern humans in Europe ultimately didn’t succeed!’ says Johannes Krause, senior author of the study and director at the Max Planck Institute for Evolutionary Anthropology.

This evidence, the academics say, means the Czechia individual is almost certainly older than other contenders with a claim as the earliest human fossil in Europe. 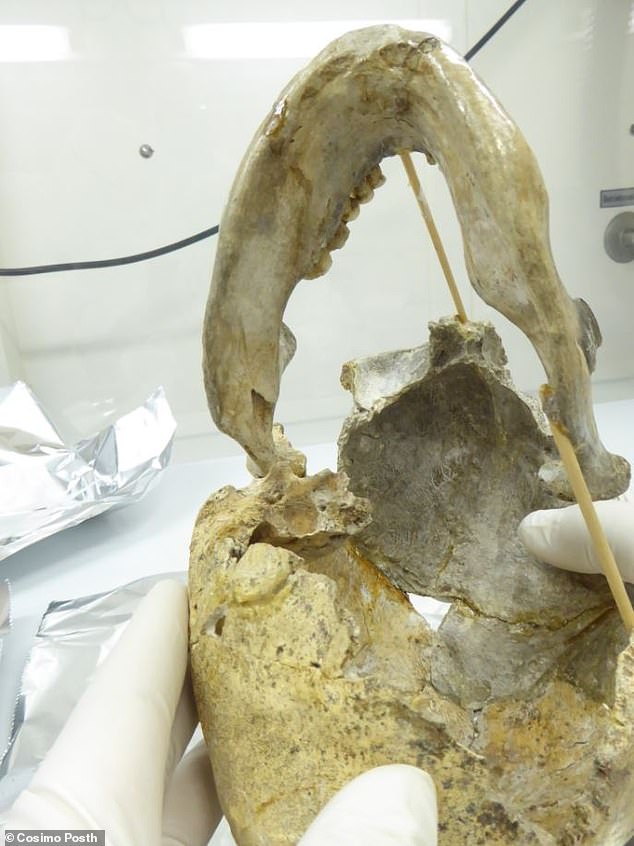 Pictured, micro-sampling the bone of Zlatý kůň from the base of the skull in the clean room at the Max Planck Institute for the Science of Human History 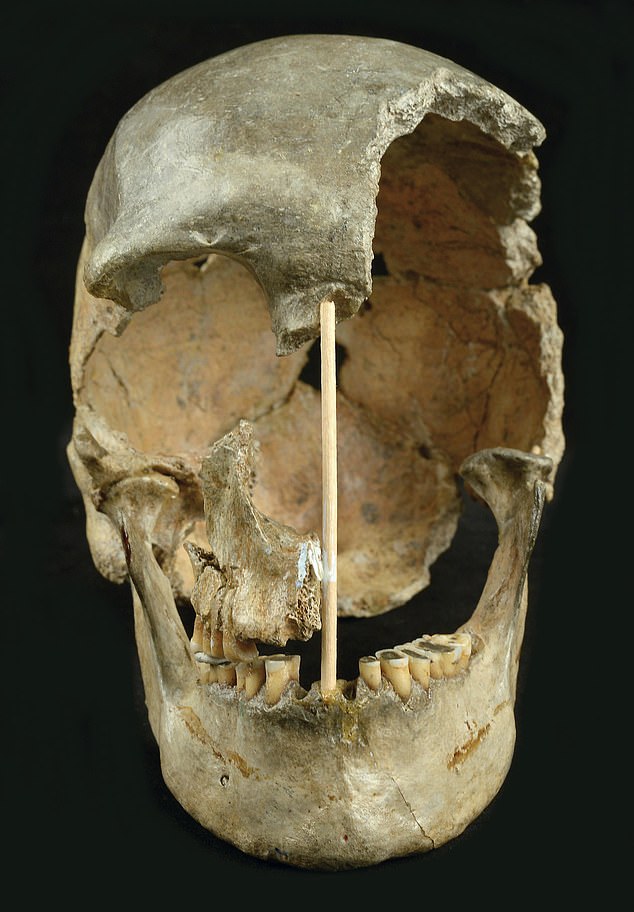 It is believed the Czech woman, dubbed Zlatý kůň, may have had Neanderthal ancestors as little as six or fewer generations back 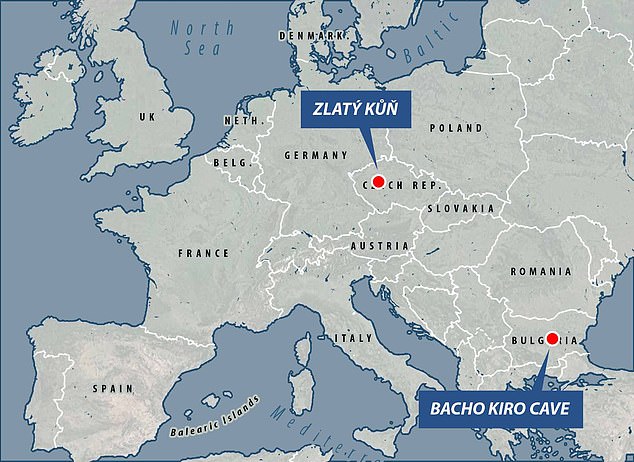 Two studies published today look at the genetic information of Homo sapiens and how much Neanderthal DNA was in their genomes. One study was based in Czechia and one was in Bulgaria

Professor Chris Stringer, research leader in Human Evolution at the Natural history Museum who was not involved in the research, said: ‘The Zlatý kůň partial skull and skeleton were discovered in 1950, and thought to be only about 15,000 years old.

‘New analyses of the woman’s skull have radiocarbon dated it to about 34,000 years old, but genomic data suggests it is at last 10,000 years older than that, and may represent one of the oldest modern humans known from Eurasia so far.’

The cave was first discovered and excavated in the 1970s and is located three miles (5 km) from the town of Dryanovo. 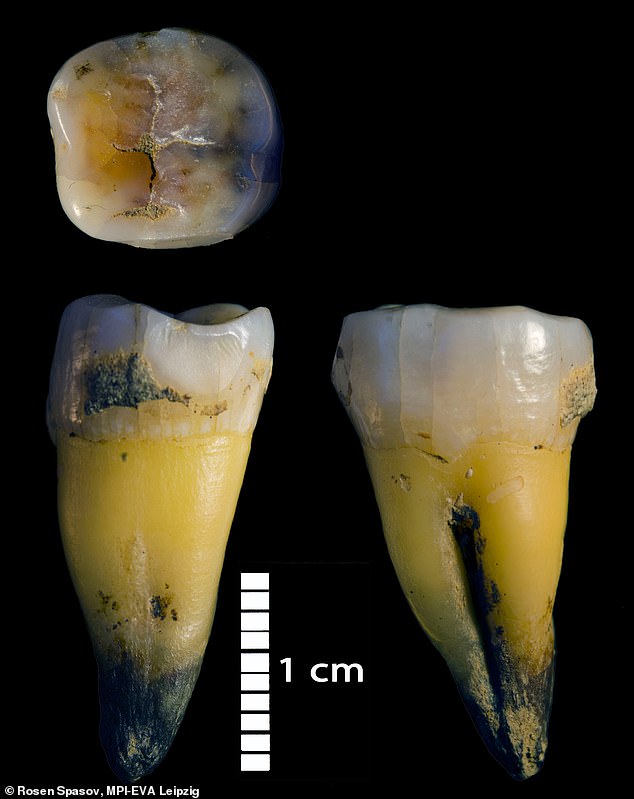 Pictured, the intact tooth of a person found in Bacho Kiro cave in Bulgaria. Genome-wide data from this individual indicates that he had a Neanderthal ancestor less than six generations before he lived 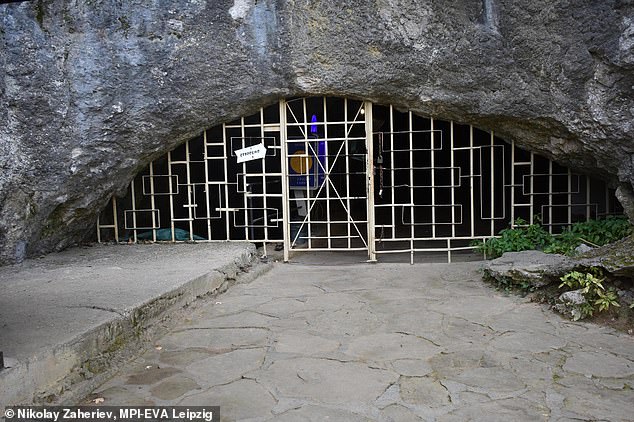 Pictured, the entrance to the Bacho Kiro Cave. The excavations are just inside the entrance and to the left. The cave extends over 3 km and is a popular tourist destination

A study also published today in the journal Nature revealed further insight into these remains and found they lived between 45,930 and 42,580 years before present.

This finding backs the claims made last year that humans likely lived alongside Neanderthals for millennia before our cousin species went extinct around 40,000 years ago.

Analysis of their genomes found the three oldest people buried in the cave have more than three per cent Neanderthal DNA in their genome.

Analysis of the fossilised human remains found the people regularly hunted bison and deer while also turning animal teeth into fashion accessories – something that Neanderthals are also known to have done. 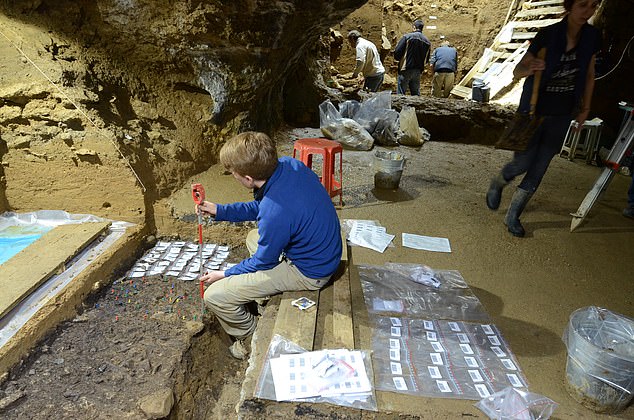 Pictured, excavations at Bacho Kiro Cave. The excavator in the front is recording artifacts (each marked with a colored pin). The bags with barcodes are for individual artifacts once their position has been recorded with a total station 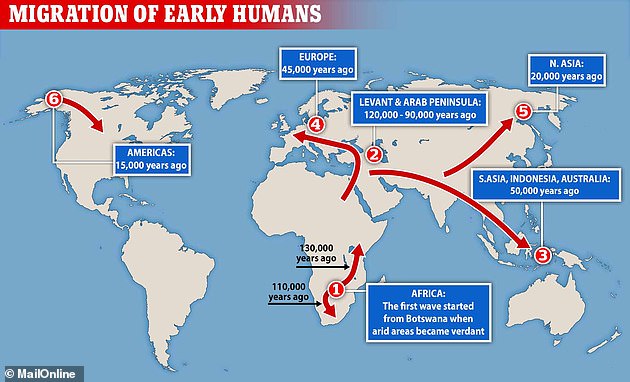 A map showing the relative dates at which humans arrived in the different Continents, including Europe 45,000 years ago. All humanity began in Africa, and moved beyond it after dispersing throughout the continent over thousands of years

Several cave bear teeth which had been turned into personal ornaments were also discovered at the Bulgarian site.

Professor Stringer adds that the findings indicate there were ‘multiple pulses’ of Homo sapiens dispersing across Eurasia.

He believes that the different waves of Homo sapien colonisation would explain why the Zlatý kůň lineage was unsuccessful. This would also mean there were various interbreeding events with Neanderthals, he adds.

TIMELINE OF HOW HUMANS EVOLVED AND MATED WITH OTHER  HOMINID SPECIES

One million years ago –  Homo sapiens (modern humans), Denisovans, Neanderthals and an unidentified ‘ghost’ populations had not yet evolved. All that existed was a single common ancestor.

Some theories claim this may be Homo erectus or Homo heidelbergensis

700,000 to 300,000 years ago – Neanderthals split from the common ancestor to form its own species and migrated to Western Eurasia

765,000 to 550,00 years ago – Denisovans split and formed its own species and dominated Eastern Eurasia

130,000 years ago – Common ancestors in Africa evolved into what we recognise today as Homo sapiens

100,000 years ago – A large wave of Homo sapiens migrated out of Africa and into the Levant

50,000 years ago – Homo sapiens begin to migrate into Europe

45,000 years ago – Denisovans and Neanderthals were mating with Homo sapiens, in Asia and Europe respectively.

15,000 years ago – Homo sapiens migrated into the Americas