As they made their way round the department store, a stranger stopped Louise Warneford and her husband Mark to compliment them on the blond, blue-eyed baby beaming at everyone from inside the pram they were pushing.

‘The lady said, ‘Oh, what an adorable little grandson you’ve got,’ says Louise. ‘She was mortified and very apologetic when I said, ‘Actually, he’s our son.’

At 49, Louise is all too aware that she doesn’t fit the mould of a typical first-time mother.

And with Mark being six years her senior, being mistaken for grandparents when they’re out with little William is a frequent occurrence.

Louise Warneford, pictured with her son William, tried to get pregnant for two decades and suffered a heartbreaking 18 miscarriages. But now the 48-year-old is finally a first-time mum

After suffering a devastating 18 miscarriages over a 16-year period, during which the couple spent £80,000 on round after gruelling round of IVF, William is the miracle baby she dared not believe she would ever have.

‘He means the world to us,’ she says. ‘I’d reached the point where I thought I’d never become a mother, but finally, all my hopes and dreams have come true and I couldn’t be happier.

‘A family doesn’t have to look the way it used to – it’s the love that counts. There are so many options available now to people who are having problems conceiving, and that’s amazing. 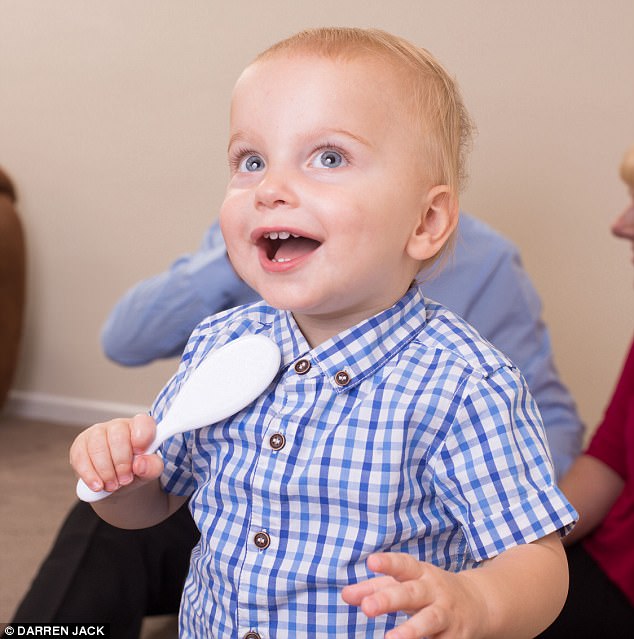 William Warneford, pictured, was born early via caesarean section at 37 weeks and became a little miracle to Louise and Mark Warneford

‘As we show, even when it feels impossible, it can happen.’

When their extraordinary story emerged last week, they were overwhelmed by the sympathy and interest. Today, they’re sharing the details of their long, arduous but ultimately successful journey to become parents to give hope to the thousands of other couples who have felt the same despair.

Visiting the Warnefords in their cosy home in an idyllic village outside Swindon, their contentment is immediately apparent. William, now 16 months old, is a ray of sunshine, smiling constantly as he trots from one parent to the other.

Louise and Mark, a driver with the Ministry of Defence, are a warm, devoted couple, doting on him. If they find running around after an inquisitive toddler exhausting, they don’t show it.

‘Like every other family, we have our moments where everything’s far from perfect, but everyone remarks on how outgoing and smiley William is,’ says Louise. ‘He brings us so much joy. I think he knows how wanted he was, and how much we adore him.’

Louise’s path to motherhood was one of emotional pain and physical exhaustion, as her multiple pregnancies ended in the grief of miscarriage. At times, Mark begged her to halt the treatment she was undergoing, worried the trauma was too much for her to take. 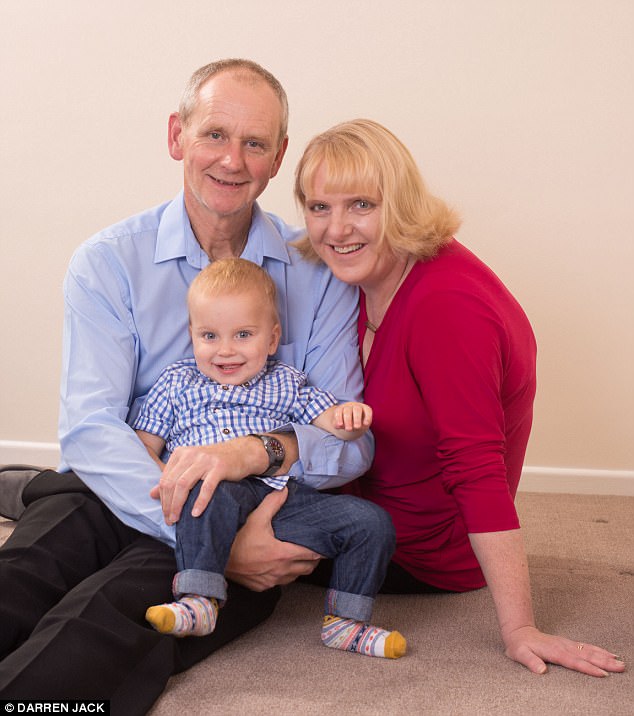 Louise and Mark Warneford, pictured with son William, had tried to get pregnant for two decades and had spent £80,000 on IVF treatments over 18 years

Yet she refused to give up.

Her desire to become a mother in the face of such difficulty might seem extreme to some. Indeed, Louise finds it difficult to put into words what drove her on when all seemed hopeless, yet her longing is something every woman who has struggled to have a child will understand.

‘No matter what I went through, that yearning to be a mother, to nurture a child of my own, never went away,’ she says. ‘I couldn’t accept that I would never experience it.’

When they met in 1999 they were in the RAF, working as cabin crew at Brize Norton in Oxfordshire. Divorcee Mark had daughters, May and Evie, now 25 and 22. Louise says she knew instantly she wanted to marry him, but there was a snag: he’d had a vasectomy.

She says: ‘I knew he was the man I wanted to have a family with, but I also knew we’d have to find an alternative way to make it happen. I had to persuade him, but once we started treatment he was very supportive.’

We’re sitting in the couple’s living room, strewn with squeaky baby books and toys including a push-along pirate named Pete. From the kitchen next door, where Mark is feeding William dinner, he adds: ‘I thought I’d had my family, and wouldn’t have any more children, but when I met Louise it changed my priorities.’

A fertility specialist suggested insemination with donor sperm. Louise became pregnant after a couple of attempts.

‘I was absolutely ecstatic, thinking everything I’d ever wanted was happening,’ says Louise, who was 34 at the time. But at her 12-week scan, no heartbeat could be detected.

‘I was devastated,’ she says. ‘It’s difficult to explain the sense of loss you feel with a miscarriage. It’s not like any other grief. It’s the loss of all your hopes for your future with that child, who will never be born. Mark tried to comfort me, as he did every other time after that, but I felt very lonely.’

She had to wait six months before trying again, but was undeterred, and remained so through a further seven pregnancies using donor sperm, each one ending in heartbreak.

Sometimes the pregnancies would go as far as 12 weeks, others would register a positive result on a test, but be lost just a week or two later.

By this time she was 38 and, with time passing, she grew increasingly distressed. Conceiving never seemed to be a problem, but time after time she had to face bitter disappointment. Once she suffered an ectopic pregnancy, in which the embryo attaches itself outside of the womb.

‘Having to go into hospital to have an operation and coming home afterwards with nothing – the emotional cost was huge,’ she says.

Mark admits: ‘It did affect our relationship. It does put a strain on you and we had a couple of massive rows, the first after the ectopic pregnancy, when we were both going through our own grief. There were times I told Louise to give up, because it was ruling our lives, but she wanted to continue so I agreed.’

A specialist suggested they try IVF, in which Louise’s eggs would be harvested and fertilised with donor sperm.

This was far more expensive, and the couple had to scrimp and save to fund it – yet faced the same disappointment. ‘I got pregnant every time with IVF, but miscarried every time,’ she says.

As she turned 40, they turned to a third approach, this time using donor embryos donated to the clinic by couples who’d had successful IVF. Again, Louise became pregnant and, once again, she miscarried. Now they knew something was definitely wrong.

‘I’d gone through the entire spectrum of fertility treatments and none of them had worked,’ she says. ‘I knew I wasn’t just unlucky. It was pushing me to the brink. I could imagine no joy for myself.’

Her 18th and final miscarriage was in 2010, when she was 42. By that point she was emotionally shattered and, following much agonised discussion, the couple finally agreed to stop trying.

‘I couldn’t take any more,’ says Louise, her eyes shining with tears as she remembers her despair.

The cause of her inability to hold on to a pregnancy continued to haunt her as she researched possible causes. One book called Your Body Baby-Friendly, by fertility specialist Dr Alan Beer, described how some women’s own immune systems can be responsible for failed pregnancies.

He argued that natural killer cells, or NK cells, which usually destroy cancer cells and viruses, can get out of control and target the pregnancy. ‘Effectively, women become serial killers of their own babies,’ he wrote.

Louise became convinced that what he was describing could explain her own terrible experience. She decided to act, finding a fertility expert called Dr Hassan Shehata who specialises in treating women with high levels of NK cells and made an appointment.

‘He tested me and said my natural killer cells were high and that he could treat me with steroids if I wanted to try again with IVF,’ she says. ‘I was very cautious because I knew I couldn’t cope with being devastated again, but I was 47 and I said to Mark, ‘I need to give it one last try before I’m 50.’ ‘

Louise’s age meant she had surpassed the upper limit for the British clinics she had previously used, so she and Mark found one in Prague called the Gynem Clinic, which was also less expensive. Private British clinics will generally refuse to treat women older than 50, but many draw the line at 46 due to the low chances of success after that age.

At the Gynem Clinic, the couple selected eggs and sperm from a list of donors with similar physical characteristics to them and the resultant embryo was implanted.

When Louise discovered she was pregnant, she admits she didn’t know how to feel. ‘I tried not to get attached to the pregnancy. I couldn’t enjoy being pregnant at all, even after passing the 12-week milestone. I was petrified something would go wrong. I didn’t buy anything for the baby until three weeks before he was born.’

During her pregnancy, Louise suffered from high blood pressure and problems with blood flow to her placenta. They meant William was born early, via caesarean section, at 37 weeks. When she and Mark saw their healthy baby boy for the first time, they were overwhelmed. ‘I was euphoric, crying and so excited,’ she says.

Her delight has continued since, although it has sometimes been tinged by lingering fears that Louise hasn’t quite been able to shake. ‘After his birth, I had terrible nightmares about something happening to him, which my doctor said were a symptom of post traumatic stress syndrome from everything I went through,’ she says. ‘I barely slept at the start, because I couldn’t stop watching him. I bought a monitor which clipped on to his nappy and would sound an alarm if he stopped breathing. It reassured me.’

Mark and Louise are close to his daughters, who adore the new addition to their family. ‘The girls are amazing and they were overjoyed for us when William was born,’ says Louise. In April, Evie had her own daughter, Nancy, making the couple grandparents, and William an uncle at just ten months old.

Mark says all the years of disappointment were worth it for the happiness the family are now experiencing. ‘We’re the family Louise always wanted now,’ he says.

Louise wants her family’s story to be one of hope for other women struggling to become mothers. She feels that fertility issues and miscarriage are still not spoken about openly enough. ‘I think if we talked more about our experiences, women would feel less alone when it happens to them,’ she says.

She is also eager to dispel the stigma that still surrounds the use of donor eggs or sperm to conceive a baby. ‘It doesn’t matter at all to us that William is a donor baby – I carried him inside my body and he feels 100 per cent ours. I believe nurture is what’s most important – I’ve already noticing him doing things I do, like play with his ear when he’s tired or unsure about something.’

She smiles at her son, who’s happily playing with a toy rabbit, and adds: ‘He’s our gift and I’m just so thankful he finally arrived.’