$5.4TRILLION has been saved up by consumers, says Moody’s

$5.4TRILLION has been saved up by consumers around the world since the pandemic began – and Britons have been some of the biggest hoarders, says Moody’s

Consumers have saved an extra $5.4trillion since the Covid-19 pandemic started and are growing more confident about the economic outlook, according to Moody’s.

The credit ratings firm added that if people were to spend $1.8trillion of that stockpiled cash, they could add 2 per cent to the global economy in 2021 and 2022.

It also estimated the United Kingdom to have one of the highest excess savings at over 10 per cent, only being surpassed by the United States, where households have put away an extra 12 per cent of their cash.

Spare cash: In the second quarter of 2020, the UK’s savings ratio climbed to an astonishing 29.1 per cent; a near 20 percentage points jump from the previous quarter

There is growing hopefulness among consumers, as well as governments and central banks that the world economy will experience a high rebound this year as consumers use some of their built-up cash to treat themselves.

Moody’s findings come five days after the Conference Board think tank recorded its highest-ever global consumer confidence levels, which it attributed to a mixture of stimulus measures, vaccination campaigns and loosening travel restrictions.

It additionally found that consumers were ‘increasingly looking forward to returning to normal activities at some point this year’ and that around three-quarters of the markets it surveyed reported a rise in confidence.

Mark Zandi, the chief economist at Moody’s Analytics, said government intervention, economic uncertainty, and the closure of businesses due to lockdown restrictions has helped shore up the high levels of excess savings.

In the second quarter of 2020, the UK’s savings ratio climbed to an astonishing 29.1 per cent; a near 20 percentage points jump from the previous quarter as Britons spent far less of their income on non-essential goods.

Zandi added that these extra savings, together with the ‘unleashing of significant pent-up demand…will drive a surge in consumer spending across the globe as countries approach herd immunity and open up.’ 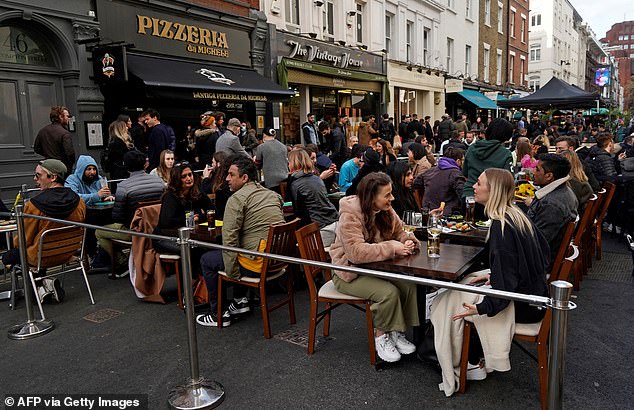 In a sign that Britons were spending a lot of the excess savings built up during the pandemic, pub and restaurant bookings over the weekend were up by over double on July last year

Following the reopening of hospitality venues and other non-essential outlets in the last week, Britons have shown strong signs that they are spending some of those excess pounds to get a haircut, visit the pub or do a spot of shopping.

Discount website Vouchers.co.uk estimates that Britons spent about £2.8billion in shops over the weekend while separate data from hospitality bookings site TheFork said pub and restaurant bookings were up by over double on July last year.

The Office for Budget Responsibility has calculated that £180billion in lockdown savings has been accumulated by British households and that they will spend a quarter of that amount in the next five years, especially on durable goods. 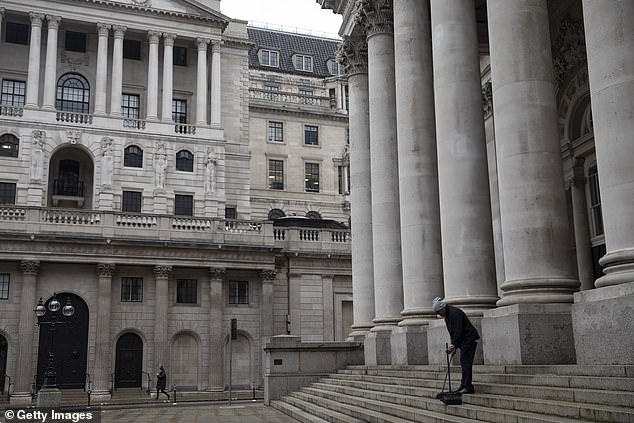 Rich pickings: A Bank of England survey published in November found that 42 per cent of the country’s wealthiest households had seen their savings increase in the last 12 months

However, there is concern that a lot of the excess savings will be hoarded because they are disproportionately concentrated among the wealthiest Britons, who tend to spend a smaller fraction of their income.

A Bank of England survey published in November found that 42 per cent of the country’s wealthiest households had seen their savings increase in the last 12 months, compared to 23 per cent of low-income homes.

The highest earners are also more likely to have kept their jobs in the past year and saved money from not indulging in activities like going to a restaurant, taking a foreign holiday or attending a sports event.

Lower earners, by contrast, are heavily concentrated in industries like hospitality, which have experienced some of the biggest job losses and decline in business from the pandemic.